It’s no secret that broccoli, Brassica oleracea var. italica, is one of the most common home garden plants in cultivation.

But did you know that the part of the broccoli plant that we typically consume is actually comprised of thousands of tiny, unopened blooms? 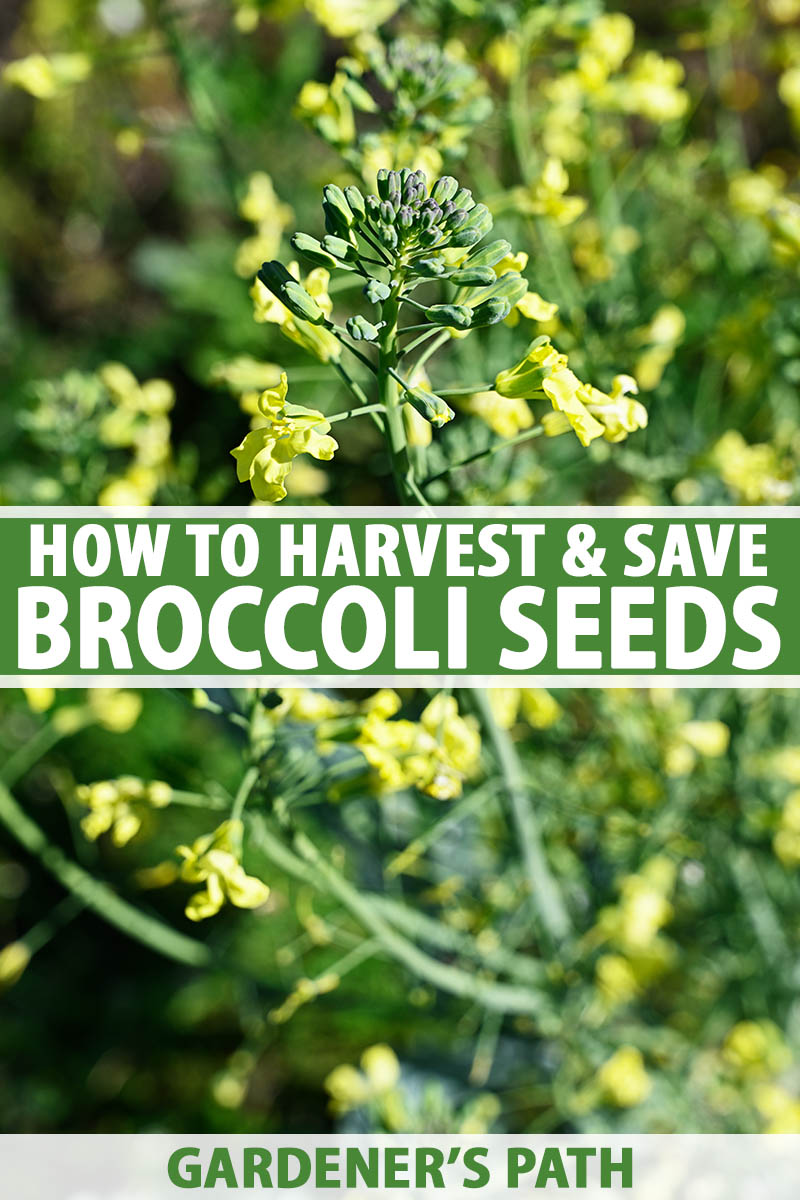 Allowing the broccoli plant to mature rather than harvesting the head means there’s time for those blooms to open and potentially be pollinated, resulting in the production of seed.

These seeds can be collected, stored, and planted over several growing seasons. Saving seeds from your garden is a wise choice with many perks.

Let’s take a look at some of those benefits and discover how you can save broccoli seeds at home.

Why Save Seed from the Garden?

Whether you are a first time gardener or a seasoned veteran with many-a weed-pulling callus formed on your green thumb, saving seeds from your garden is a good idea. 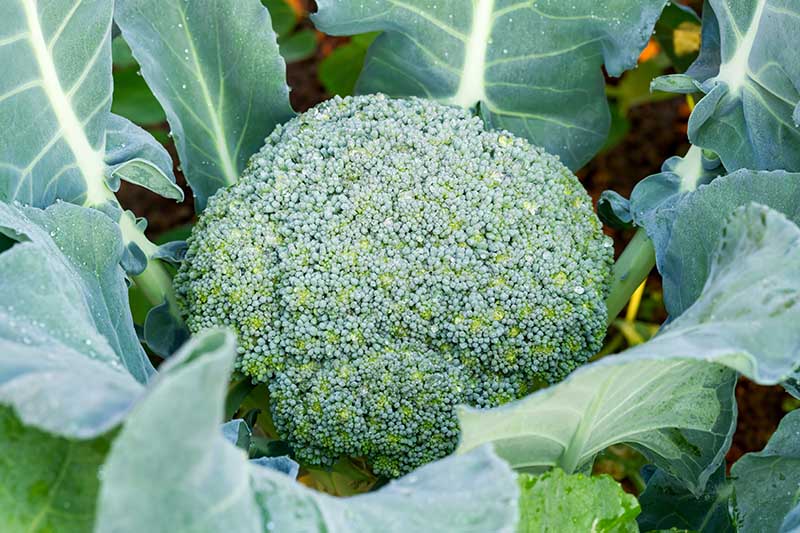 When planning your garden space, consider including a few extra plants of each variety that you plan to collect seed from. This way, your main harvest is not reduced by allowing plants to bolt.

See our complete guide for comprehensive information on how to grow broccoli at home.

Most plants in the garden produce a large number of seeds. Broccoli produces so many, in fact, that one plant can provide crops for years to come, without needing to spend any money to buy more.

Sourcing them from the best specimens in the garden will allow for controlled cultivation of selected characteristics, such as large, compact heads, or disease resistance.

In addition, seed saving is particularly attractive if you choose to grow an organic garden, without the use of pesticides or harmful chemicals, because you can guarantee that your own plants were not treated or exposed while they were growing.

Plants can absorb substances from the soil and also by foliar absorption, so anything that is applied to the garden has the potential to become part of the plant, and by extension, part of the seeds it produces.

Those saved from the home garden can also result in plants that are healthier and better suited to the environment that the parent plant grew in. Purchased seeds may come from plants that were grown in a very different environment, which can lead to growing challenges when propagated.

Some home gardeners choose to trade seeds with other locals, which increases the variety and productivity of the garden with little to no cost to you.

And many heirloom variety garden plants have been saved and passed along through the efforts of hobby gardeners, resulting in long lineage that makes it possible to grow the same crops that our ancestors grew – in some cases, hundreds of years ago.

Note that your selected broccoli variety and plant spacing are important considerations, to avoid cross-pollination and production of seeds that do not grow true to the parent plant.

When planning your garden space, aim to keep brassicas separated, because plants in this family can cross-pollinate. It’s recommended to plant brassicas at least one hundred yards apart to avoid these issues, so keep the cauliflower, kale, brussels sprouts, and other related crops away from plants that you intend to collect from.

Hybrid varieties, which are themselves cross-bred versions of more than one cultivar, are not suitable for seed saving either, as this may result in plants that differ considerably from the parent.

Anatomy of a Broccoli Plant

Broccoli is a cruciferous vegetable, and is a member of the mustard, or Brassicaceae family. This large group includes various edible plants, such as cabbage, cauliflower, and brussels sprouts. 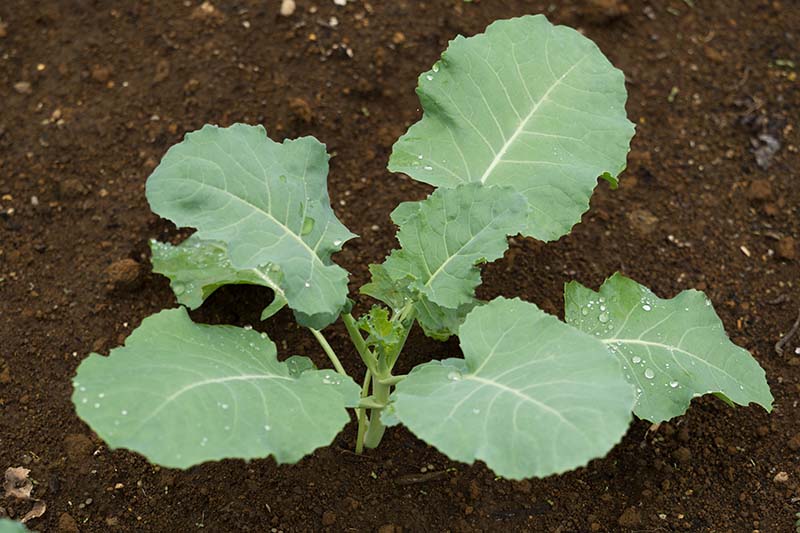 When a broccoli seedling sprouts, it first forms a stem that thickens as it matures. This stem becomes the stalk that the head or crown will form on, which is comprised of florets.

Florets are tight clusters of tiny buds that form on individual stalks growing from the central base stalk. When left to mature past harvest time, the buds will open and become flowers.

If you’ve ever left a head of broccoli in your produce drawer past its prime, you may have seen it begin to turn yellow. It looks the same on the plant when it’s preparing to bloom. 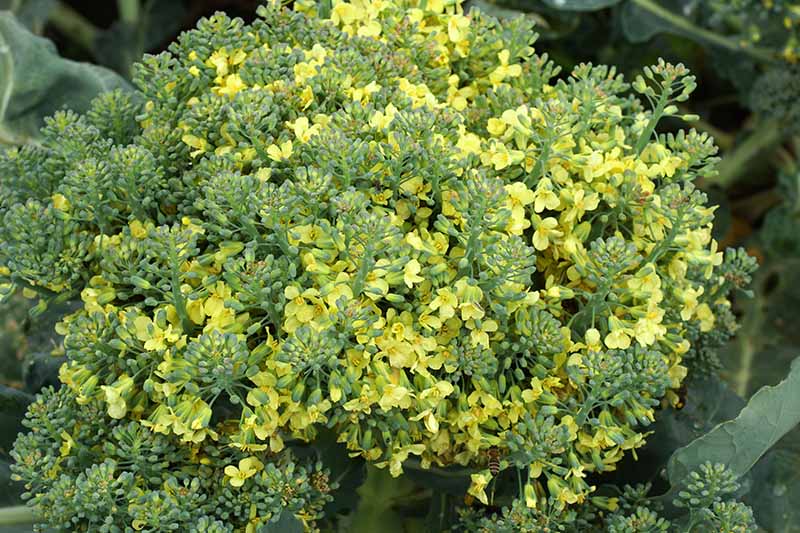 The warmer the weather, the faster broccoli plants will bolt. Bolting is sometimes considered a negative as gardeners view it as a “ruined” plant that’s not suitable for eating, however, it’s an important process in which the plant prepares for the next stage in its life cycle.

Stalks will often bolt to two or three times their height and form a mass of tall stalks that support the blooms as they open.

These small, yellow flowers will await pollination. Once the blooms have been pollinated, the petals will drop, and wispy tendrils will take their place.

At first, the tendrils will be thin and immature. No seeds are present at this stage, and it may take several weeks to a few months before the pods develop and fill out, ready for colllection. 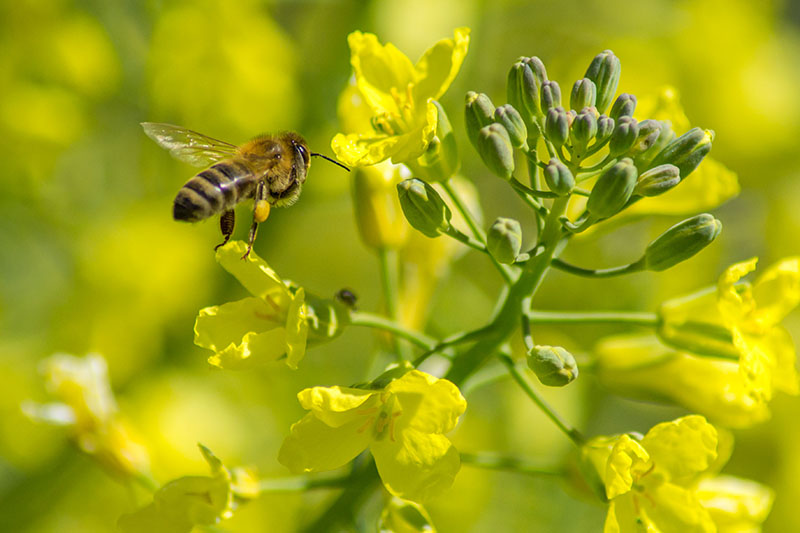 As the pods mature, or “cure,” the plant will start to die off and turn yellow or brown. The pods will become visibly plumper, similar to small bean pods, when the seeds have formed inside.

Once the plant has died off and the stalks and pods appear brown, it’s time to harvest!

How to Harvest Broccoli Seeds

Broccoli seeds are extremely small, which you most likely noticed when you planted them, unless you started with plugs.

And if you’re like me, you probably lost half of them in the soil and ended up with sprouts popping up all over the place. 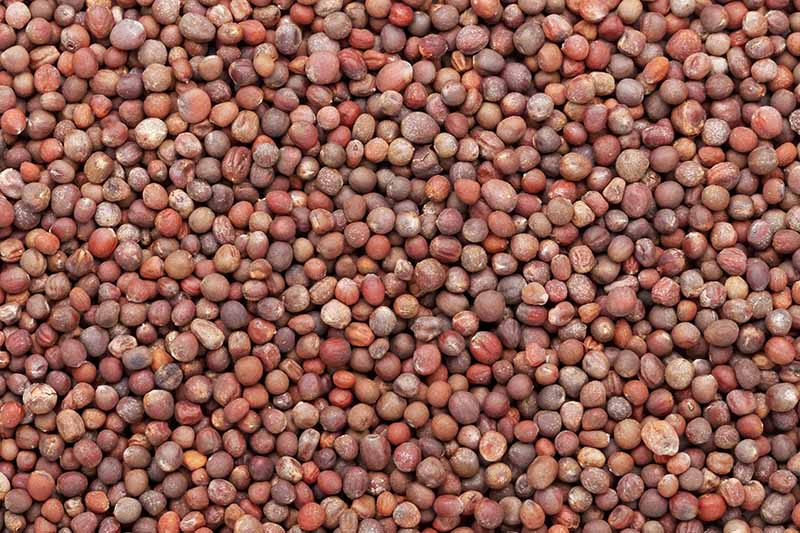 When the plant has died off, it’s easiest to snip off the stalks with garden shears and bring them indoors to process. Allow the pods to completely dry out before processing.

Start with a clean storage tote or plastic tray. Break the pods off of the stalks, being careful to hold the pods over the tote or tray to collect any seeds that fall out.

Once the pods have been broken off the stalks, press and roll each one between your thumb and finger, splitting the pods and freeing the seeds inside.

Another method of collection is to place the pods in a bag and shake it or rub the sides together to open them. But in my opinion, this method makes it harder to separate the seed from the hulls, and can result in some being lost.

Collect the seeds in the tote or on the tray and allow them to dry fully. It’s best to leave them in open air for several hours or overnight in a cool, dry place. If they have not been dried well, they can rot in storage.

When they are dry, it’s time to store them for next growing season.

Learn more about how to start broccoli from seed in this guide.

It’s extremely important to preserve the viability of the seeds you harvest through proper caretaking. 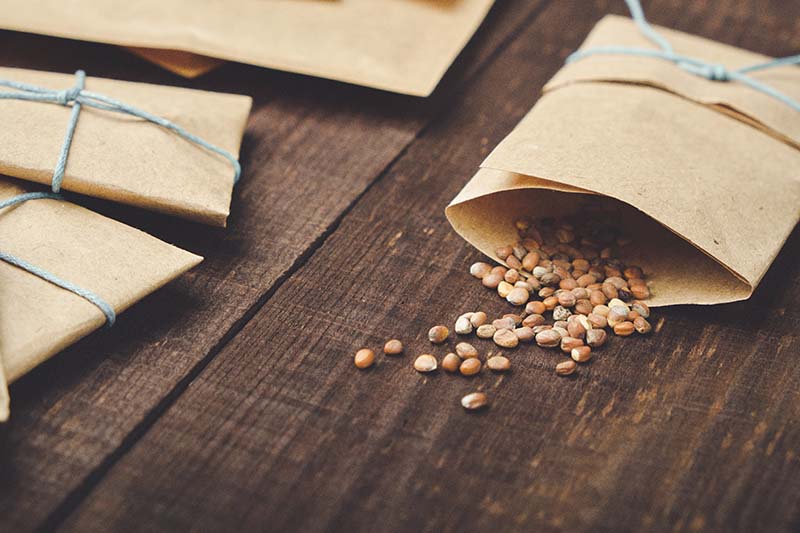 Some require special storage conditions, such as those from stone fruits like peaches and plums, which must be stored at low temperatures to cold stratify them before planting.

Some, as with broccoli, will be preserved best by storing them in a consistently cool, dry place, and they should remain viable for up to two years.

Those that are older than two years may not be viable, but before throwing them out, you can test them by seeing if they float in water. Seeds that sink are most likely viable, while those that float are most likely not.

My recommendation if you aren’t able to use them all up quickly (or share them with friends) is to do this test, discard the ones that float, and try planting the rest if you have some left over from an older stash. 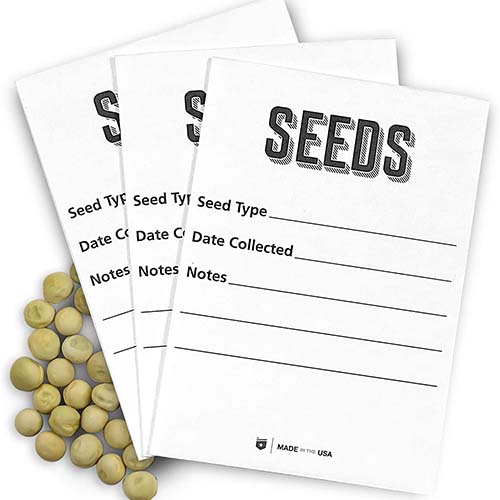 While they can be stored in paper packets, such as these, available from Amazon, or plastic zip-top bags, they must be further protected, because moisture or pest damage can ruin them.

Storing the packets in a glass or plastic container with a lid will protect them for the next growing cycle; however, it’s recommended to go with paper packets, as plastic can result in trapped moisture from transpiration, which can ruin the seeds.

Packets should be marked with the cultivar name and harvest date, and stored in a glass, metal, or plastic air-tight container.

Make a note in your gardening journal and every growing season, take a peek through your stash and weed out those that are older than two years, or plan to conduct a viability test before planting.

Don’t Cut Down Those Bolted Plants

It can be frustrating to see a plant bolting before harvest, but bear in mind that this is a part of the natural life cycle of the plant. 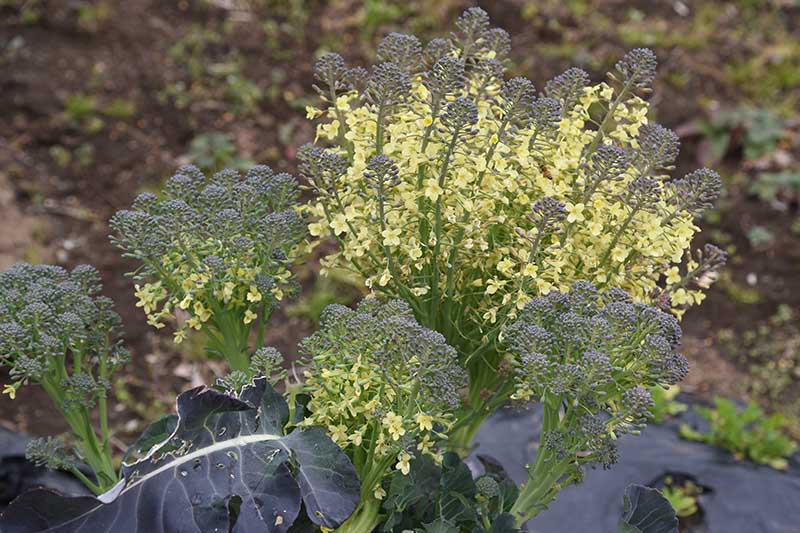 What may seem inconvenient can actually save you money and create a more sustainable garden.

Which plants have you had the best results growing from seed saved from the garden? Let us know in the comments below, and feel free to share your stories and questions!

Check out these articles next for more information on growing broccoli at home:

Kelly Spicer became a single parent at a young age, and learned very quickly how scary food insecurity can be. As a result, she began self-teaching to learn how to grow food, which led to a passion for providing for others in need. Currently, Kelly is coordinating a plan to produce a tropical homestead in south Florida that will provide homegrown food to families in need, and teach them to grow their own. She is working her way toward certification as a master gardener, and building a lifelong love of nature with her kids.