Gardeners in temperate areas either endure winter, or defy it.

Those who endure it are sustained by color catalogs from seed, bulb, and plant nurseries; those who defy it resort to greenhouses or windowsills crowded with amaryllis, forced bulbs, and foliage plants.

For those of us in hibernal denial, however, there’s another outlet: find plants that actually bloom in winter.

Some of these misfits are well known: the Christmas rose (which rarely blooms at Christmas, and in any case is not a rose, but a hellebore, Helleborus niger) and the Lenten rose (Helleborus orientalis) are planted to provide winter bloom.

The bear-claw hellebore, H. foetidus, often displays its lime-green, maroon-edged blooms for us here in Zone 6 as early as February.

Snowdrops, early narcissi, and crocuses are usually up and in bloom well before the official end of winter.

I employ all these hardy performers, but I also grow a few larger, more spectacular winter bloomers that may not be as well known.

First of these is the hardy camellia ‘Winter Star‘ from the famous breeding program initiated by Dr. William Ackerman of the USDA.

There are a number of these beauties available now in commerce, many of them identified by the “Winter” in their names.

The shrub itself is quite handsome, with glossy evergreen lanceolate leaves and prominent scaled flower buds, but the real show begins in late October, and lasted this year through December.

The entire 8-foot high plant is covered with flowers, real flowers: light pink with delicate petals and a central boss of gold stamens.

Listed as a single, Winter Star is better described as a semi-double, especially when it has few years of growth behind it.

The flowers don’t open all at once, and in the absence of a severe frost, you can expect several weeks of pure delight.

Bees and other insects are very appreciative of this late season food source.

Another useful shrub is the hybrid witch hazel, Hamamelis x intermedia. I grow two of the many excellent cultivars: ‘Ruby Glow’ (it was supposed be ‘Diane,’ a much better clone) and ‘Jelena.’

As I write in early January, ‘Jelena’ is already in bloom, and will probably continue blooming until March.

The curious strap-like petals unfurl on warm days to produce a delightful clear scent, and on cold days (like the one pictured) shrivel up to preserve their energy. 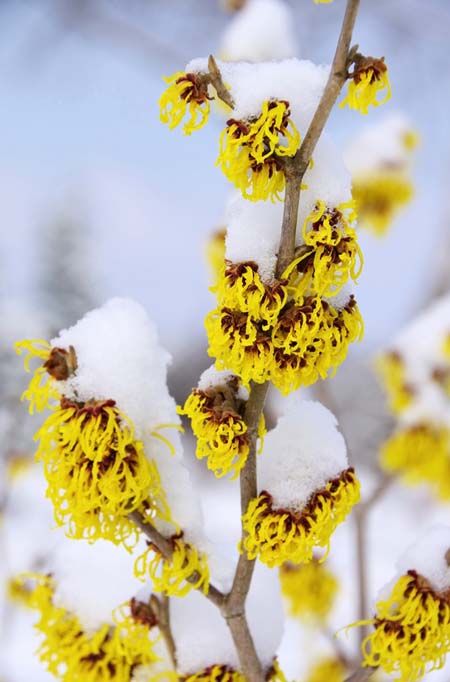 Other desirable cultivars for late winter or very early spring include ‘Pallida’ and ‘Arnold Promise’ – both yellows – and ‘Feuerzauber,’ another red.

The witch hazels also provide wonderful fall foliage color, echoing the hues of the flowers but on a larger scale.

Give them moist soil and light shade and they will reward you with scent and color in the bleakest time of the year.

Two housekeeping concerns: the rootstocks used to graft the various varieties are often prone to suckering, and must be kept under control with diligent pruning.

And, once the leaves have lost their fall color and shriveled to brown, they can be very persistent on the branch, and may interfere with the winter flower show.

A few minutes invested in cutting off dead leaves will yield dividends when the fat flower buds begin to unfurl later in the year.

I discovered another winter bloomer on a trip to an English horticulture school. It was January, and I was struggling up a wooded hillside trying to find my class.

Suddenly, I smelled something wonderful: a rich perfume that filled a small clearing.

I found the source – a rather nondescript shrub covered with small white flowers, and since this was, after all, the grounds of a horticultural college, I found a tag: Lonicera fragrantissima.

When I returned home, I found a source and planted a rooted cutting, which now measures several feet in every dimension and has just begun to bloom again.

The flowers are attractive but not showy. It’s the scent alone that makes L. fragrantissima worthwhile: a breath of summer in the heart of winter.

Many snobbish gardeners, myself among them, tolerate rather than enjoy the annual show put on by Forsythia.

For some reason, the superficially similar flowers of the winter jasmine (Jasminum nudiflorum) are much more welcome.

For another, winter jasmine blooms in – wait for it – winter. Mine are in bloom now, although they will settle down once the unseasonable warm temperatures fall. 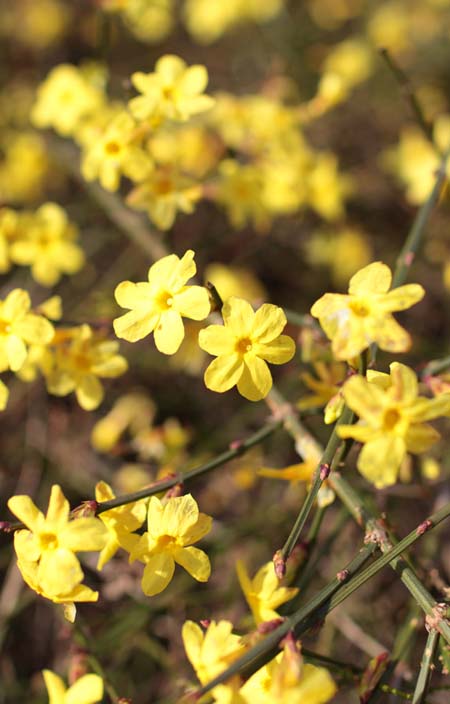 Towards the end of winter, however, I can expect another flush of bloom, beating the forsythia by weeks.

In spring and summer, winter jasmine is used on slopes and walls to provide a shiny cascade of greenery.

It spreads reliably but not too aggressively, likes full sun, and can be used to stabilize banks and run-off areas.

There are other ways to add visual interest to the winter garden. Conifers provide strong shapes and a surprisingly wide variety of color.

Tree barks and structures make a wonderful counterpoint to a snowy background, and twig color can add surprising accents.

They can sometimes be difficult to tell apart. For more information on how to differentiate the many varieties of conifers, read our article here. 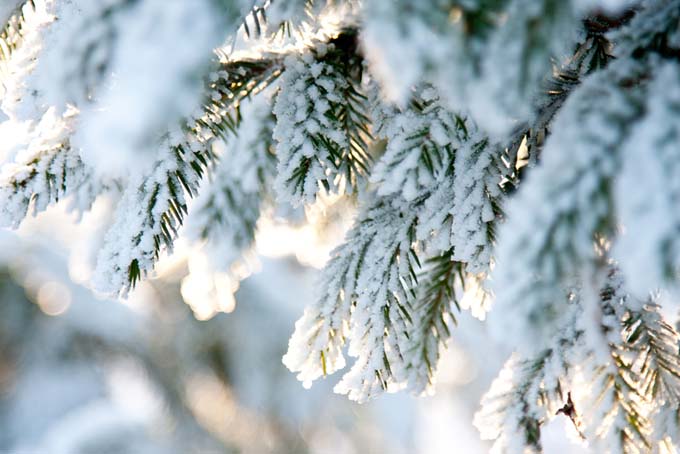 But there’s no substitute for flowers, and fortunately there are a few hardy plants that provide a floral fix in the coldest, darkest times of the year.

Seek them out, grow them, and enjoy your garden for all twelve months.