Turnips are vulnerable to several pests, including cabbage aphids and root maggots, that plague other crucifers.

In addition, other insects are more annoyances than serious pests. Examples include whiteflies and caterpillars that feed on the turnip foliage. 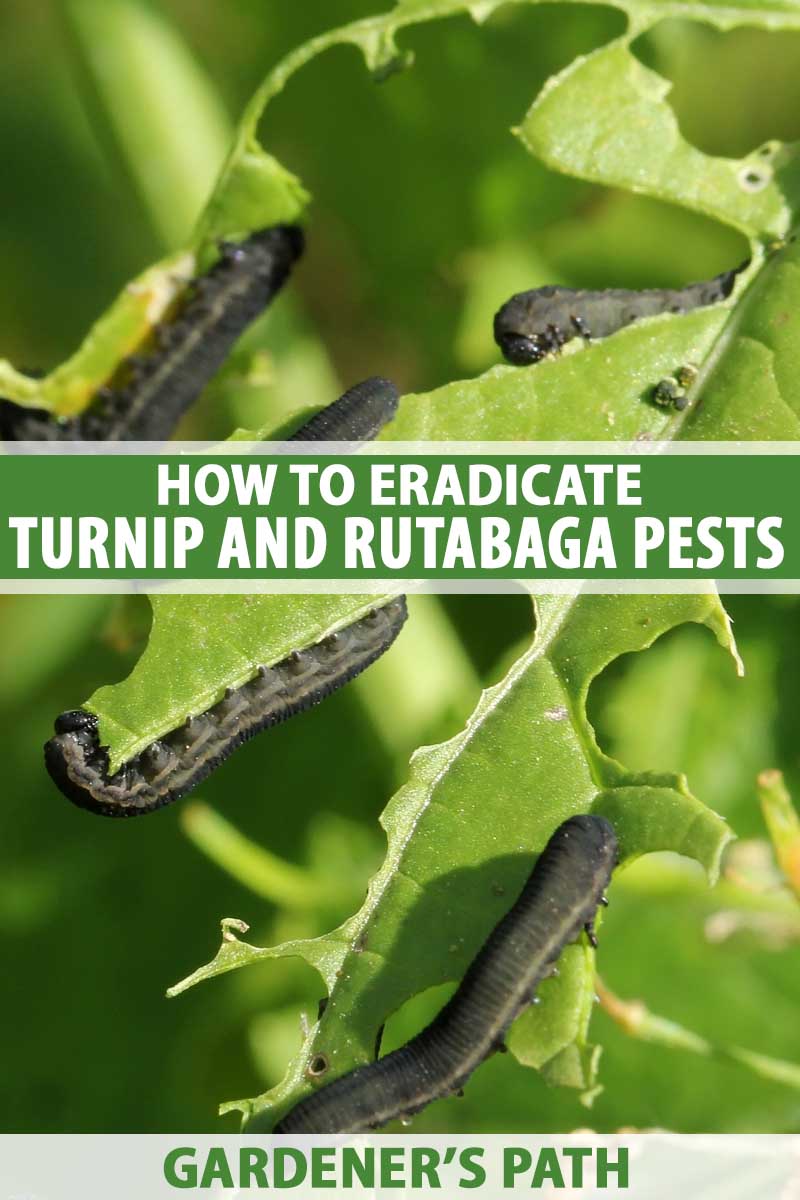 We provide an overview of the major insect pests of turnips and rutabagas and advice on how to control them.

This small gray-green insect doesn’t look very scary. However, the populations of the cabbage aphid can build to large levels, and it can stunt the growth – or in the worst-case scenario – kill your plants!

You can minimize the chances of infection by checking your transplants for aphids before you plant them. If you do find aphids, try to prune them out.

An option to prevent these pests from settling on your plants is to surround the turnip plants with reflective mulch like silver-colored plastic.

A popular and effective biological control is to release benficial, aphid-devouring insects such as soldier beetles, ladybug beetles, big-eyed bugs, and hover flies.

If the populations get too large, you can treat your plants with some type of insecticide. Oils like neem or canola oil or insecticidal soaps will generally work to control the cabbage aphids infesting your turnips.

If you do apply insecticidal soap, do so in cloudy weather that is less than 90 F.

An adult root maggot (known as a cabbage fly, cabbage root fly, root fly or turnip fly) looks like a housefly, while their maggots are white or white-yellow grubs that are approximately 0.3 inches long, tapering toward the head.

These fearsome pests can cause extensive root damage to rutabagas and turnips. In fact, the crops can be too badly damaged to harvest them.

Another bummer about these insects is that the tunnels they dig in the roots predispose the plants to rots by soil fungi.

The insects overwinter in the soil as pupae. If they are not present in your soil, you have some chance of fending them off by using floating row covers to prevent the female flies from laying eggs.

Seal the edges with soil to keep the females out. Row covers work best with spring crops. If you use them in the fall, your crop may have lower yields and poorer root quality.

If you are using a row cover, make sure that no aphids are present because the aphids will increase in numbers without their natural enemies to keep them in check.

If your crop is severely damaged, your only choice is to remove and destroy all the crop debris. No pesticides are registered for root maggots that can be used by home gardeners in the US.

Another thing to worry about with root maggots is that if the temperature is cool in the early fall, the eggs from late-season flies will survive.

If you see clouds of tiny white insects flying up from your turnips whenever you disturb them, your plants are infested with cabbage whiteflies. 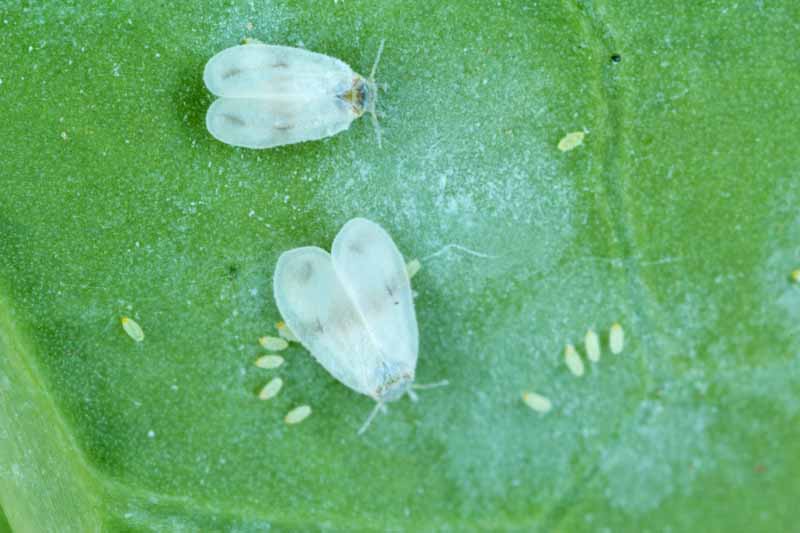 The bottom of the leaves will look like they have white scales. These are the nymphs of the cabbage whiteflies.

You can tolerate small amounts of these insects, since they only affect the leaves.

However, heavy infestations can result in a black sooty mold on top of the leaves. If this is the case, you should implement control measures.

It is important to note that this pest is not the same as the greenhouse whitefly (Trialeurodes vaporariorum). However, similar types of predatory insects’ prey on the whiteflies.

For this reason, you should try and avoid using pesticides to control these whiteflies. These types of treatments can kill the natural predators and cause the populations of the whiteflies to rebound.

Organic sprays are a good choice because they will kill the whiteflies without affecting insects like adult ladybugs. You can use horticultural oils or insecticidal soaps and cause very little harm to beneficial organisms.

If you use insecticidal soaps, be sure and apply them when the weather is cloudy, and temperatures are less than 90 F. Avoiding the sun will protect your turnips, since treatment with insecticidal soaps can make them sensitive to the sun.

Such tiny insects and so much damage. Flea beetles don’t look very scary. They are 1.5-3 mm dark colored (dark, shiny gree to black) insects that jump when disturbed. 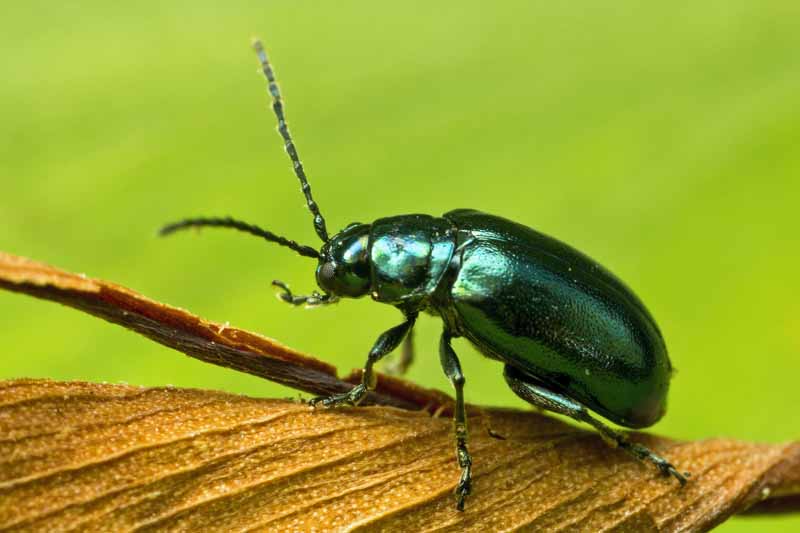 However, flea beetles chew holes in the leaves that make them look like they have been shot with buckshot. Young plants are more susceptible than mature ones.

And a specific species, the cabbage stem flea beetle (Psylliodes chrysocephala), is not just content to devour cole crops as an adult.

It lays its eggs at the base of  many different brassicas (including turnips and rutabagas) where they crawl into the stem as larvae and feed on the host plants.

You may be able to protect the young plants if you use floating row covers before the beetles emerge in the spring. Trap crops are an option, too – cruciferous ones work best.

Another option is to apply a thick layer of mulch. Organic growers can use oil like neem or diatomaceous earth.

Insecticidal controls include spinosad, which is available in organic formulations, carbaryl, permethrin, and befenthrin. They will work for approximately a week, but then you will need to reapply them.

Unfortunately, slugs thrive in the cool humid weather that turnips thrive in, and these slimy pests will voraciously feed on all cruciferous vegetables. 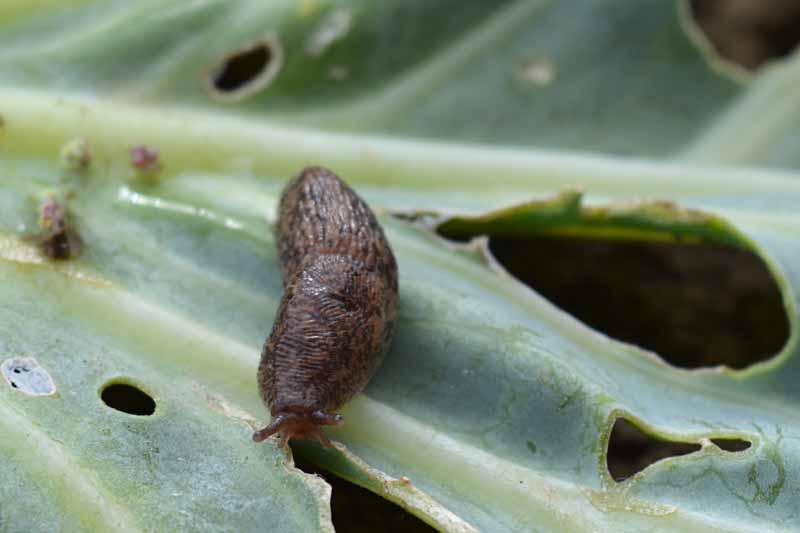 If not controlled, slugs can destroy your whole crop in just a few days.

However, all hope is not lost! You have options ranging from beer traps to baits and beneficial nematodes.

The turnip sawfly was an extremely serious pest in Britain in the 1700 and 1800s. Reports abounded of clouds of these pests that “darken the sky” and were “like flights of bees.” 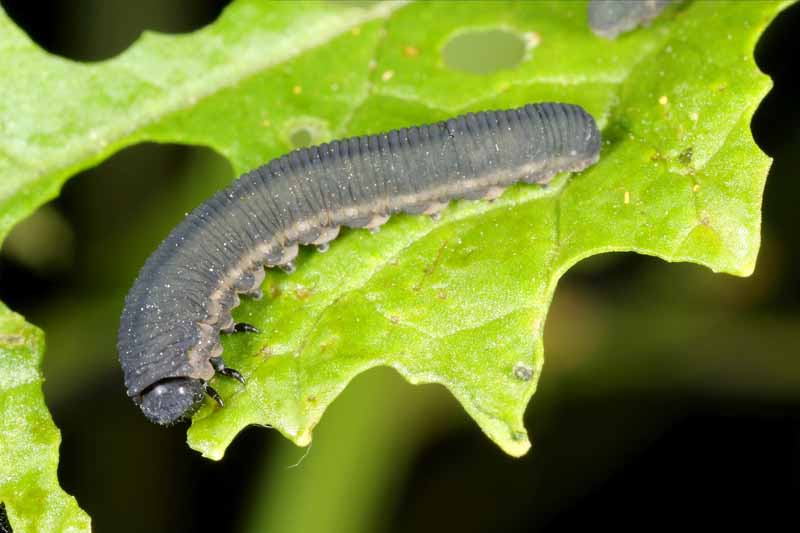 This fearsome pest looks relatively harmless. The orange adult is about 7 mm long with a black head. Its larvae look like black caterpillars.

However, a single female can lay up to 300 eggs in the turnip leaves. After they hatch, the larvae start out feeding inside the leaf, but then they feed on the underside. Eventually, just a skeleton of the leaf remains.

The larvae pupate in the soil for 10-13 days before the next generation of adults emerge.

Bt will not control these pests. Although they look like caterpillars, they are a different type of insect. You can use Spinosad to control turnip sawflies.

These nasty pests can infest the soil for up to five years as yellow-brown, shiny larvae. They can kill the seedlings or girdle the stems of the turnip or rutabaga plants. 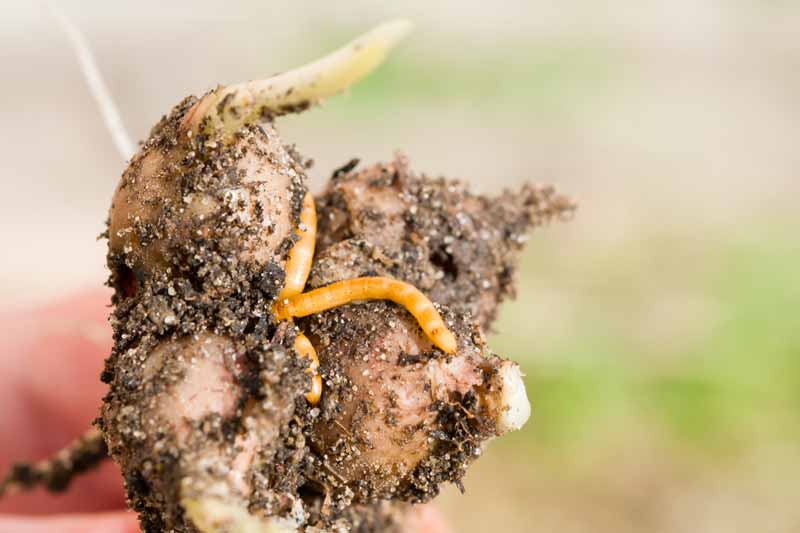 There is no way to control wireworms once a crop is growing. You need to treat with insecticide at preplanting or as a seed treatment.

If you know that your soil is infested with wireworms, leave the field fallow over the summer and frequently till it.

Rotate to a crop that is not a host for wireworms, i.e., avoid cereals.

There is a Reason They are Called Pests!

These four groups of insects can do a number on your turnip or rutabaga crops. There is not much you can do if your soil is infested with wireworms.

However, you have some hope of preventing infestation by flea beetles or root maggots by using row cover crops.

You can control aphids with neem oil or insecticidal crops before they kill your crop.

Have you had luck controlling pests on your turnip or rutabaga crops? If so, let us know in the comments. Even if you haven’t had luck, let us know, so we can commiserate with you.

Read on for more information on turnips and rutabagas including:

One of Helga George’s greatest childhood joys was reading about rare and greenhouse plants that would not grow in Delaware. Now that she lives near Santa Barbara, California, she is delighted that many of these grow right outside! Fascinated by the knowledge that plants make chemicals to defend themselves, Helga embarked on further academic study and obtained two degrees, studying plant diseases as a plant pathology major. She holds a BS in agriculture from Cornell University, and an MS from the University of Massachusetts Amherst. Helga then returned to Cornell to obtain a PhD, studying one of the model systems of plant defense. She transitioned to full-time writing in 2009.