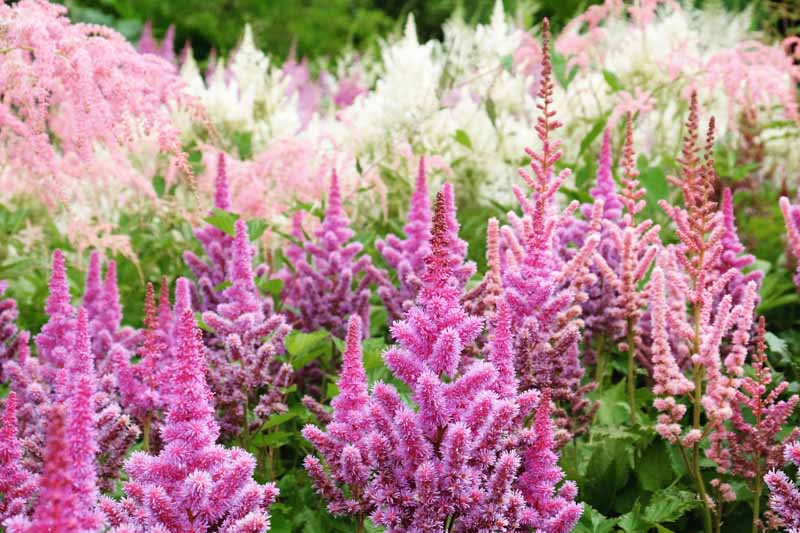 It took me far too long to discover the beauty and special quality of the shade garden. Since I’ve always been into those tough, hard-scrabble plants that eke out a living in any condition, the idea of a garden full of particular and at times sensitive plants was not of interest to me.

But as I’ve gotten older, I’ve discovered a keen appreciation for these gardens and the plants that call them home.

Perennials like heuchera and painted ferns opened up a previously unappreciated collection of foliar colors, while flashy and bright annuals like torenia added lovely splashes of color.

Of all the plants in the shade garden that earned my affection and appreciation, the astilbe (A. x arendsii) comes in at the top of the list.

The foliage itself is interesting and worthwhile, but it’s the large flowers that really make them sing. As an added bonus, they seem to enjoy being placed in a wet corner of the yard – what more could we ask for in a shade perennial? 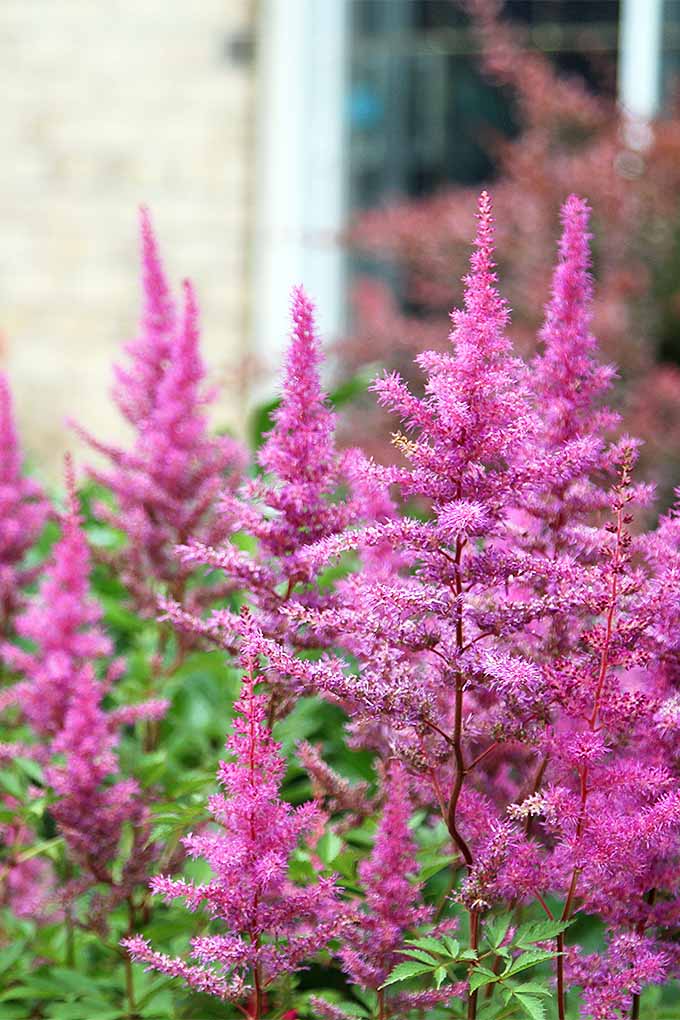 We’ve prepared a helpful and informative overview of growing, establishing, and maintaining astilbe. We’ll also take a look at some nice cultivars that you can add to your own garden. Keep on reading to delve into awesome A. x arendsii!

Hello, Nice to Meet You

If you aren’t already familiar with this lovely perennial, it’s time for some introductions:

A flowering perennial that reaches heights ranging from one to six feet, astilbe spreads via underground rhizomes.

It’s a relatively slow-growing perennial that will fill in a space that you’ve chosen for it nicely, when given enough time. For the gardener who wants to see results sooner than later, it is suggested that you purchase some container plants from a reputable seller.

Keep reading for a few of our suggestions so you can pick out a few for your garden right away. 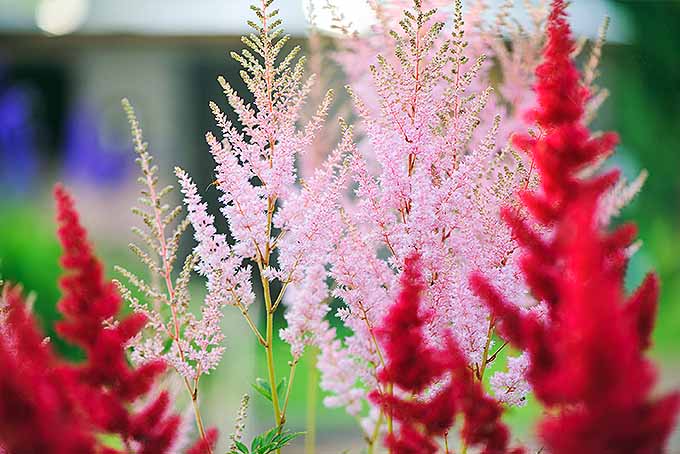 Because it spreads via rhizome, you’ll be able to dig up and divide A. x arendsii every 2 to 4 years. I’ve worked in gardens where we dig out large clumps and are able to divide them into over a dozen plants. If you want to keep them from spreading, you can also grow them in containers.

The ideal time to divide astilbe is in early autumn, after they’ve finished flowering.

The foliage of astilbe can vary between cultivars, but it’s generally an emerald green in the spring with a bronze tone that becomes more pronounced as the temperatures heat up. It is a basal plant, so the foliage tends to come up from a single point of origin at the base of the plant.

In addition to adding compost to amend the soil regularly – twice a season is a good interval, in both spring and fall – astilbe benefits from springtime fertilizing as well.

These plants enjoy a fertilizer with a high phosphorus content, to encourage their blooms and root development. This springtime feeding is key to developing those great blooms and heights A. x arendsii is famous for.

Because they’re at their best in shady areas with moist soil, these plants are prone to a few problems. But they are otherwise surprisingly resistant to pests. Powdery mildew and cercospora leaf spot can kill astilbe if left untreated.

Bacterial leaf spot is an unattractive disease that affects astilbe, but it is rarely fatal. Instead, it limits the growth of the affected plant. Most gardeners will just let it go, but copper fungicide has been shown to make a marginal dent in the spread of this disease.

The tarnished leaf bug is another pest that is attracted to astilbe, but it is likewise not a serious threat. Simply picking the bugs off and dropping them in soapy water is the preferred control method.

Astilbe is at its best when in a slightly acidic soil that is consistently moist. This quality makes these perennials perfect for that low corner of your yard that gets a consistent flow of run-off during the summer.

They make excellent additions to a bog garden as well, where there is ample organic matter and moisture for them to gobble up.

They’ll grow their best when given plenty of water, but they don’t like “wet feet.” That makes good drainage essential and also means heavily clay soils are a no-go for these plants. Too much moisture during the winter will also stress and harm the rhizomes of astilbe. 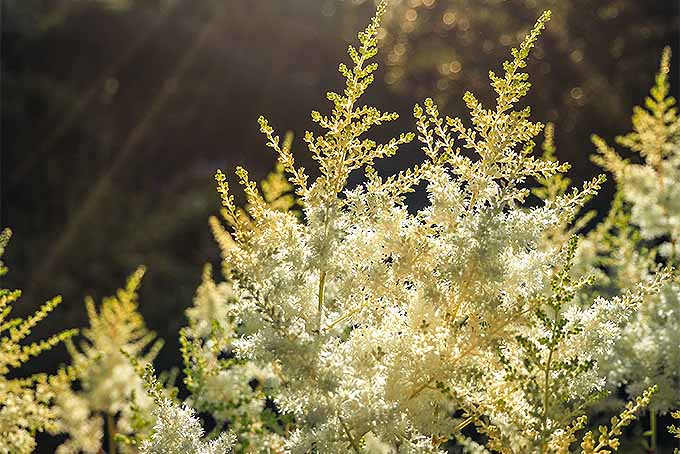 Regular additions of compost will aid in providing a fertile environment for astilbe, and also helps improve the soil quality of the garden.

By amending your soil, you can make a more hospitable home for A. x arendsii if your intended location is less than perfect. Put in the extra effort to create an ideal site with good drainage, plenty of organic material, and consistent moisture, and you’ll find your astilbe at their happiest. 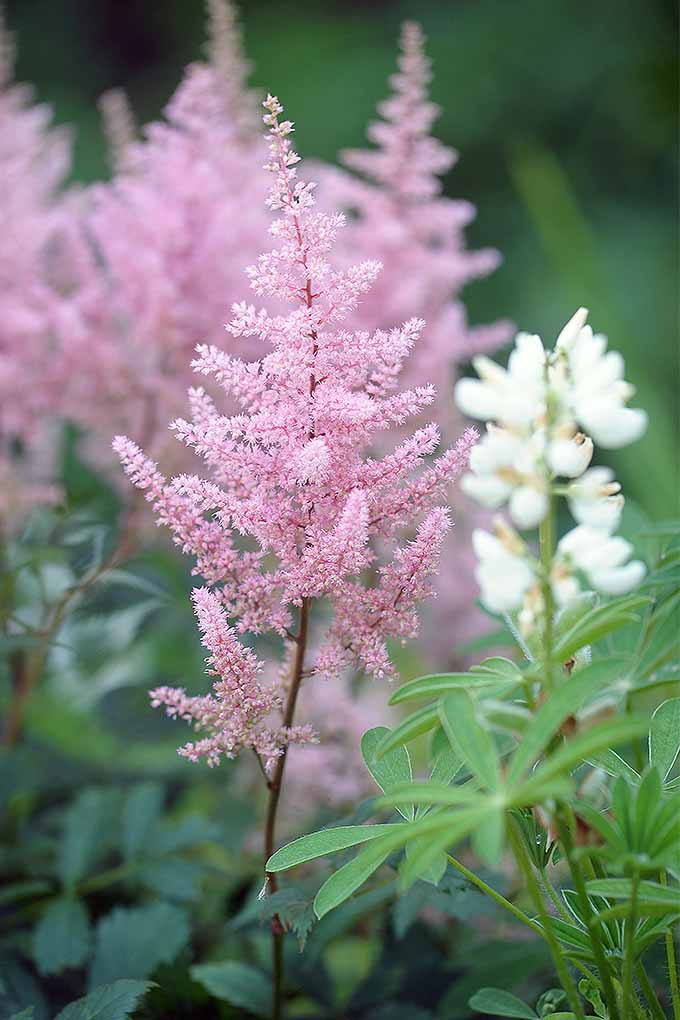 A fan of dappled shade, A. x arendsii will suffer and crisp up in full sun, but also fail to reach their full flowering peak if located in deep shade.

If astilbe receives 4 to 6 hours of sun a day, it will put on its wonderful flowered show. If planted in deep shade it will still fill your garden with lovely foliage, but few flowers.

Astilbe are rather hardy in the winter. They tend to grow in US Hardiness Zones 4-8, though some cultivars are capable of holding on all the way down through Zone 3.

Springtime feeding helps to establish the roots needed to make it through the winter.

Leaving the flowers and foliage standing through the winter helps to ensure a smooth transition from winter to spring, and the flower heads can add special interest and a meal for hungry birds. 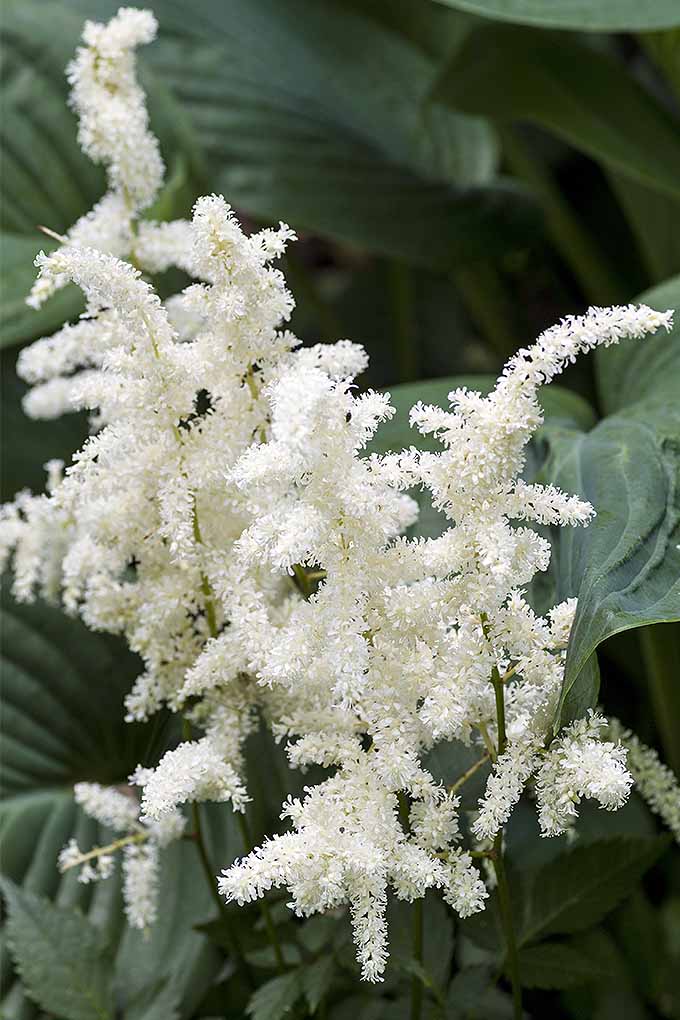 Thriving in shady, regularly moist areas offers A. x arendsii plenty of planting companions. Hosta and iris are natural pals, along with heuchera and trillium. Impatiens and begonias are some classic shade-lovers that are paired well with astilbe.

Consider the use of moss and ferns as well. If you have a spot for A. x arendsii, it’s almost guaranteed that moss and fern will establish themselves readily.

As far woody shrubs are concerned, azalea and rhododendron go hand in hand with astilbe. They prefer the same type of light, favor slightly acidic and regularly moist soil, and have complementary bloom colors.

Varieties and Where to Buy

Many species of astilbe were cultivated by just one man in Germany. His name was George Arends, a master hybridizer who in a single year developed a stunning 74 new varieities of the plant.Each cultivar below has its own description so you can find the right plant for your yard, and a handy-dandy link that you can follow to purchase your very own.

Remember that astilbe tends to prefer well-drained and rich soils. Maintain a spacing of about eighteen inches between plants so they’ll have room to spread and fill out. Adequate spacing also helps to minimize the risk of diseases caused by poor air circulation.

Talk about red. ‘Visions in Red‘ adds something just shy of firetruck red to boldly stand out from the cooler colors in the shade. 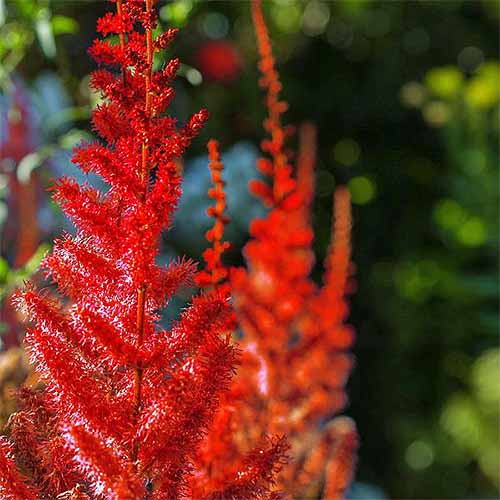 The flower plume will grow more intense in color until it reaches its peak in mid-summer, but the bronzed foliage is yours to enjoy for the rest of the season. Reaches a height of about thirty inches.

If you’ve got an ambition to add some pink to your garden, ‘Little Visions’ in Pink is the plant for you. Hirt’s Gardens offers live plants in quart-sized pots.

The color falls somewhere shy of bubblegum, but because it blooms in early to mid-summer, it adds a complement to redbuds and the maturing foliage of hosta and other shade plants. Reaches a height of about sixteen inches.

A nice, deep red is complemented by the lovely display of emerald green foliage astilbe is famous for.

The ‘Fanal’ variety is acceptable in a wider growing range than is typical for this perennial, and it may thrive in Zones 3-9. Blooms in late spring to mid-summer and reaches a total height between eighteen inches and two feet.

Available from Classy Groundcovers via Amazon in packages of 10 bare root plants, note that this vendor cannot ship to Alaska, Arizona, California, Hawaii, Nevada, or Washington.

A favorite choice of mine for customers’ gardens, ‘Bridal Veil’ is about as delicate a flower as they come. 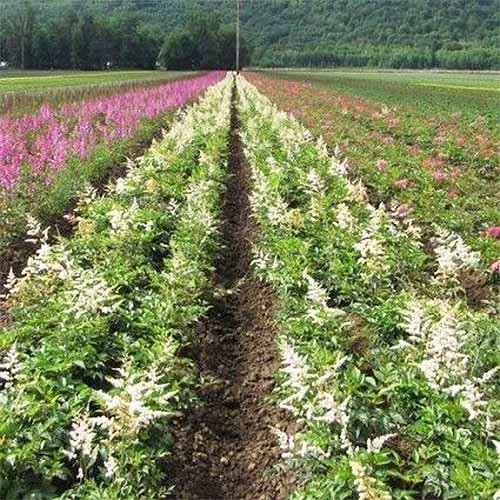 Lacey foliage in a deep and saturated green hue serves as the base for creamy, all-white flowers that live to surf on the breeze. Reaches a height of up to twenty-eight inches and blooms throughout the summer.

If you’re looking for more of a porcelain white than what the Bridal Veil offers, check out ‘Visions in White.’ The foliage is a bronze-green. 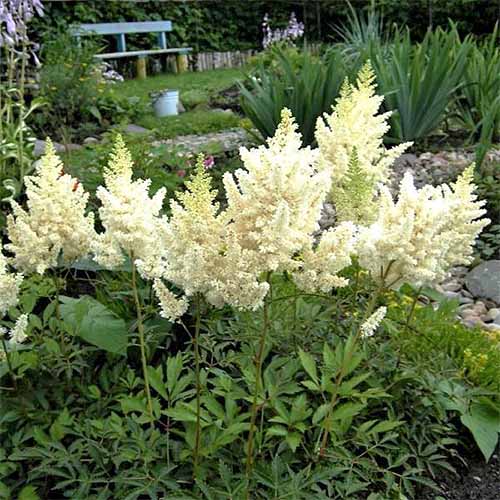 As an added bonus, ‘Visions in White’ can bloom all the way into the fall in the right conditions. Reaches a height of about thirty inches.

Blue-green foliage pairs with the almost apricot flowers of ‘Delft Lace.’ The foliage is notably rougher looking than most A. x arendsii and adds interesting texture to the garden.

If grown in full sun the flowers will suffer, but the foliage takes on a stronger red color. Blooms late spring to early summer and can reach two feet in height.

You know to expect warm tones and colors from a cultivar called ‘Peach Blossom.’ 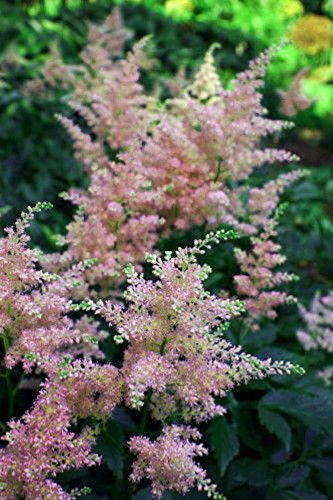 The – you guessed it – peachy-pink flowers offer a bit more warmth than what’s typically seen in A. x arendsii. Expect these to bloom from early to mid-summer and reach up to two feet tall.

Feeling up to a challenge? Give growing astilbe by seed a shot with the ‘Showstar’ Mix, available from True Leaf Market. 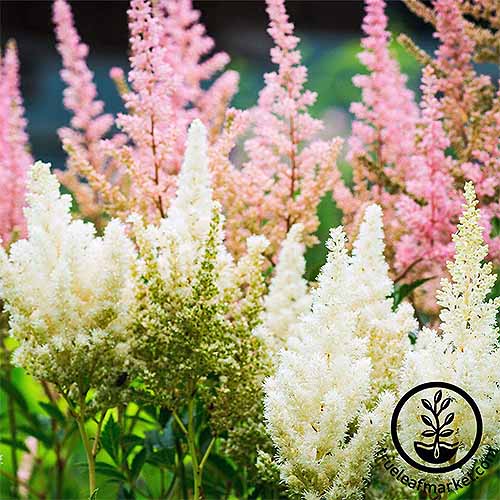 Although quick to establish itself and spread to fill in an area, astilbe grows slowly from seed and can take a few years to blossom. Still, we’re gardeners; patience is part of the game, right?

This variety will reach a height of nearly three feet.

Be sure to check out this supplemental guide where we share our picks of the 15 of the best astilbe varieties.

Onward to the Shade Garden!

Shade gardens are where it’s at when it comes to subtlety and cool color transitions.

It’s an ideal place for the gardener to spend a summer afternoon with a book and a cup of coffee or tea. Introducing the right plants and combinations can turn that little corner of the yard into a lovely outdoor room.

Although there may be sweeps of hosta and brunnera that dominate the edges, it is the addition of colorful shade-loving perennials like astilbe that will make the area sing. 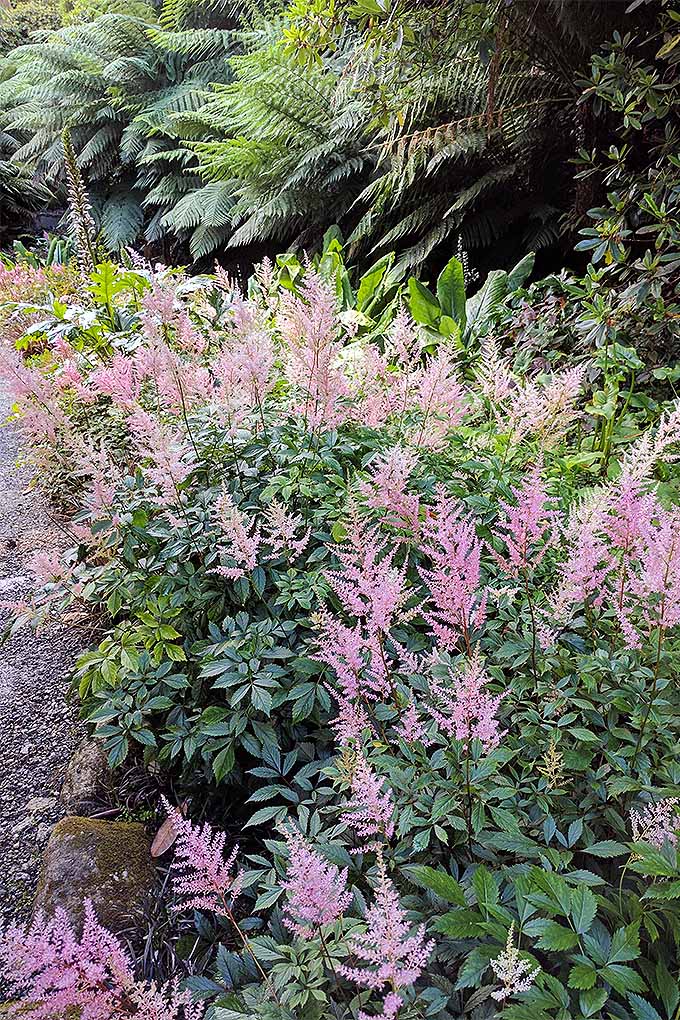 The colors of these flowers may tend to fall into a narrow area, but new cultivars are being developed that add some warmth and beauty to the shade.

As always, we’re eager to talk shop and answer further questions in the comments section. Drop us a line below!

Matt Suwak was reared by the bear and the bobcat and the coyote of rural Pennsylvania. This upbringing keeps him permanently affixed to the outdoors where most of his personal time is invested in gardening, bird watching, and hiking. He presently resides in Philadelphia and works under the sun as a landscaper and gardener, and by moonlight as a writer. An incessant questioning of “Why?” affords him countless opportunities to ponder the (in)significance of the great and the small. He considers folksy adages priceless treasures and is fueled almost entirely by beer and hot sauce.
More Posts 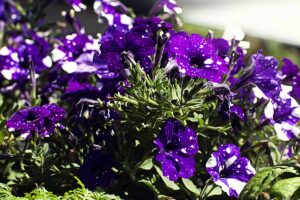 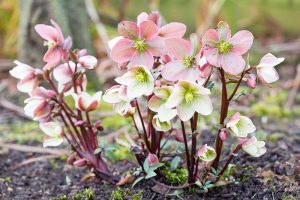 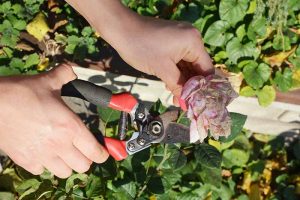 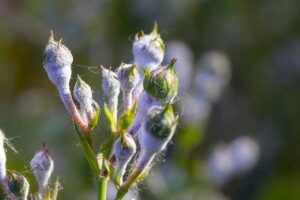 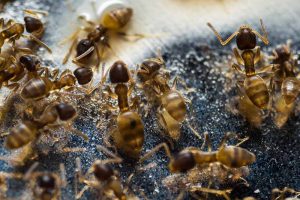