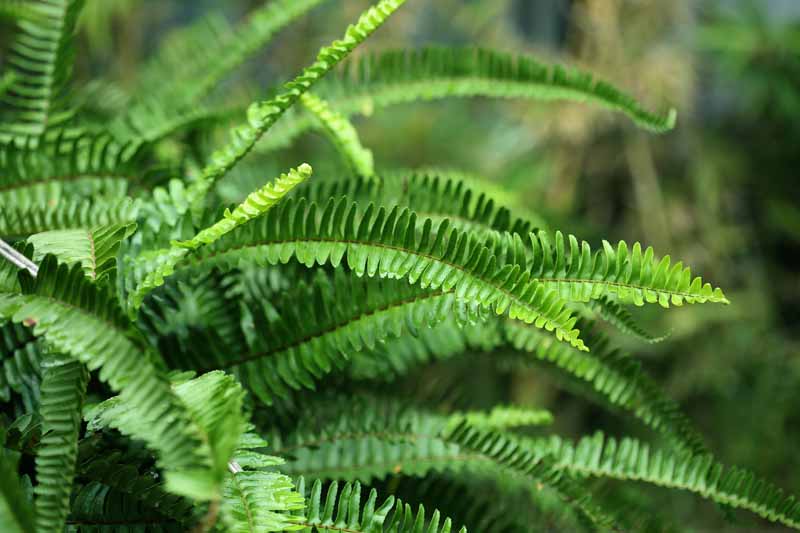 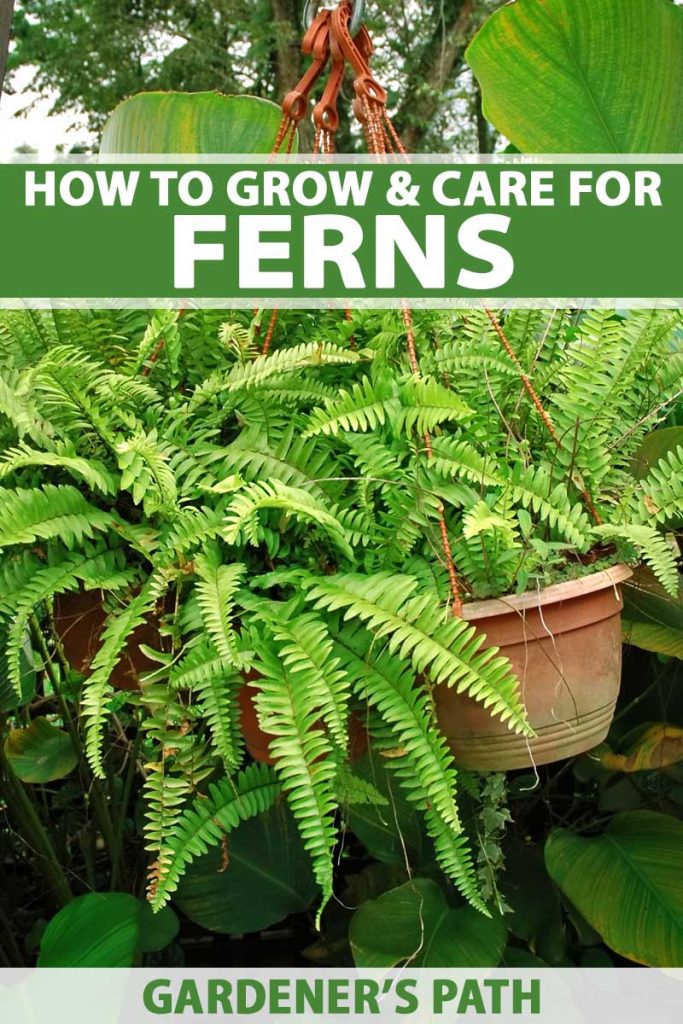 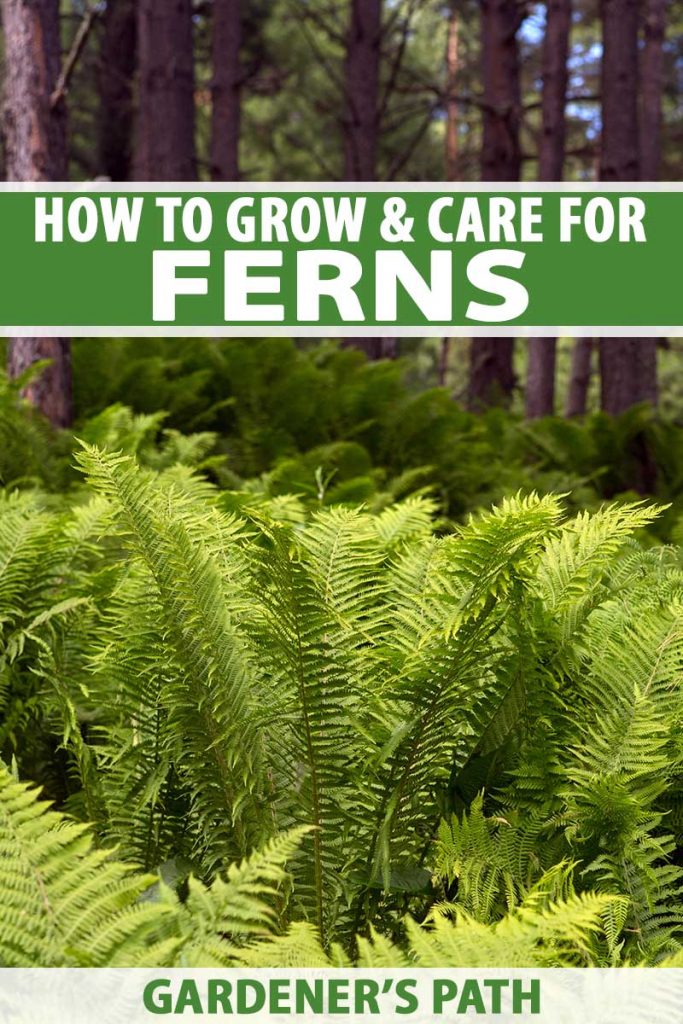 Many of us think of “Jurassic Park” when we think of ferns (Pteridophytes) – abundant, spiky greenery thrashing about as huge dinosaurs crash through the forest in pursuit of human intruders.

At 300,000 million years old, they were, indeed, among the dominant plant species when dinosaurs roamed the Earth. And as many as 15,000 species now call our planet home.

Scientists aren’t exactly sure how many species exist, because new ones are still being discovered in unexplored tropical areas, according to Encyclopedia Britannica.

But we know there are more than enough for you to choose from to include in both your landscape and inside your home, as these green beauties are versatile additions to either place.

While ferns are relatively easy to grow, you’ll want to understand some of their peculiarities before diving in. Let’s get started!

Ferns are vascular types of greenery, land plants with rigid, woody tissues that form “tubes” used to conduct water and minerals throughout.

They reproduce via spores and have neither seeds nor flowers, and are distinguished from other spore-bearing plants, such as moss, by the fact that they have true roots, stems, and complex leaves.

And spore-based plants are evolutionarily much older than seed-based ones.

Instantly recognizable by their lace-like fronds (divided leaves) and hues of green ranging from olive to chartreuse, ferns are the Kevin Hart-Shaquille O’Neal of the plant world, varying in size from a quarter inch to as tall as 80 feet.

Because ferns evolved in the shadows of the giant conifers that dominated the landscape in the time of the dinosaurs, they are generally fond of indirect light.

This makes them a wonderful go-to for areas of your garden that are shady – and frustrating to fill since so many plants want sun, sun, and more sun. 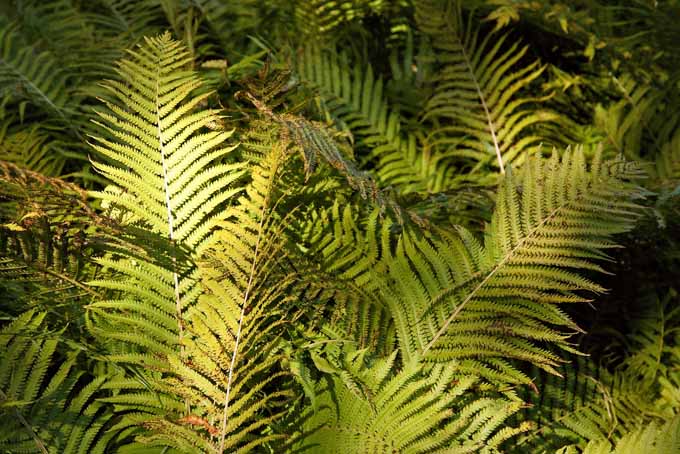 Of course, there are exceptions to every rule. Some species – which may be evergreen or deciduous – will do well in sunny areas.

They are also very geographically diverse.

“There are ferns that do well in almost every area of the United States,” says Skip Richter, a county extension agent with Texas A&M Agrilife Extension Service. “Check with a local source to find the best varieties for your area,” he recommends.

‘Japanese Holly’ fern, successfully grown in Zones 5-10, has “leaves” that are leathery and serrated, resembling holly.

If you want a true “Jurassic Park” experience, you might plant bracken (Pteridium) fern – it is one of the oldest and most evolutionarily persistent ferns.

Scientists have identified bracken fossils that are more than 65 million years old.

But beware – bracken can be be quite invasive with its extensive branched rhizome, which may grow to 1,300 feet in length.

All of these varieties (and more!) are available from Nature Hills Nursery.

Hungry, Thirsty All the Time

Whether grown in sun or shade, “they almost always want a high organic matter soil that’s moist,” says Richter. “A forest floor, for example, is ideal. The decaying leaves and understory lighting are just what they need,” he adds.

Adding these ancient treasures to a landscape that mimics those conditions will likely offer the best chance of success for most varieties, Richter says. 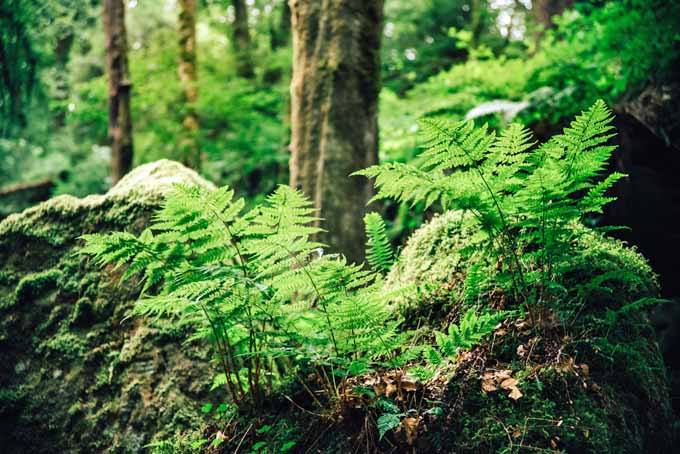 A top dressing of organic matter every now and then will ensure your plants are well fed. Keep in mind that they generally prefer soil that is more acidic than alkaline.

Again, there are exceptions, but most prefer a highly moist environment, such as in a humid forest or along a water source.

In the home garden, mimic these conditions by applying plenty of water if rain is infrequent. Keep the top six inches of soil moist but not soggy.

Spring is the best time to transfer these plants from one place in the garden to another. If installing from a container, any time is fine.

In either case, you may want do the work when it’s cloudy, to lessen the shock to the plant.

Simply dig a hole about the same depth as its container or root ball and twice as wide.

Remove the plant from the container and place it in the hole; then fill in with organic soil. Water well, and add a layer of mulch to retain moisture.

You can also propagate these multifaceted plants by dividing them.

Start by watering the plant the day before you intend to divide it. Gently dig up the plant (or remove it from its container) and then cut or pull it into two or three clumps.

Each clump should have at least one growing tip – this is the structure from which the fronds grow. Replant the clumps as desired and keep the starts moist until you see new growth. 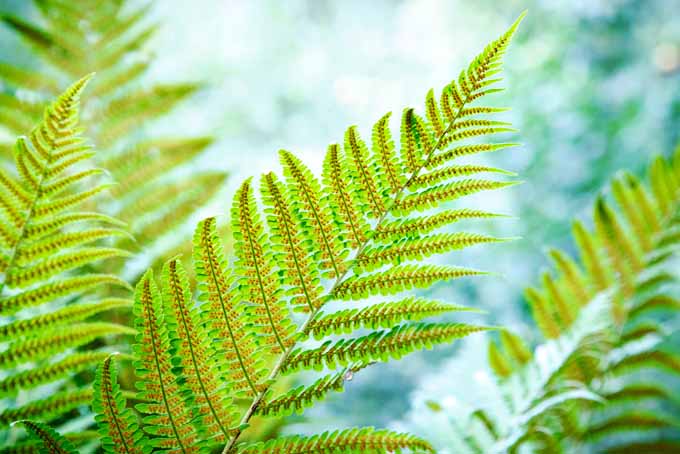 Creating new plants from spores is trickier, and takes a long time, but it can be done.

Choose spores when they look plump and furry. Remove a healthy frond and place it in an envelope or between two pieces of paper to dry out, then shake to loosen the spores.

Dust the spores over wet, organic, and sterile potting soil in a flat tray with a lid. Before you add the spores, you can microwave your soil to kill any pathogens.

To do this, moisten the soil so that it is damp but not waterlogged and place it in a microwave-safe container. Cover with a paper towel or ventilated lid and heat for about 90 seconds on full power for every two pounds of soil.

Don’t microwave seeds or spores as that will likely kill their ability to germinate.

Place the tray indoors in indirect light, and keep the soil moist at all times. Eventually you’ll see a green coating on the surface of the soil; many months later you will see small fronds popping up.

Some varieties produce stolons, or runners. To create a new plant from one of these, simply “pin” the runner to the top of the soil using landscape staples or a small stone.

Keep moist and look for new growth. At this point, you can cut the stolon from the mother plant and transplant as desired.

To provide indirect light, place near a north-facing window. Avoid south or west facing windows, because too much sunlight can scald the fronds.

As many indoor environments tend to be quite dry, be sure to water indoor consistently and provide an adequately humid environment.

Try situating them in a bathroom, for example.

Other ways of increasing humidity, according to the University of Vermont Extension Department of Plant and Soil Science, include placing the pots on a water-filled, pebble-lined tray, placing a room humidifier nearby, or misting them occasionally.

Thirty to 50 percent humidity is the sweet spot for these prehistoric plants.

While a fern is actively growing, the University of Vermont recommends fertilizing by applying liquid houseplant fertilizer at about one-half the recommended rate.

And while asparagus fern is a popular houseplant, it is not a true fern. It is a member of the lily family.

Need More of this Lacy Beauty?

If you decide these shade-lovers are really your thing, you might want to first visit Fern Canyon.

This is an actual place in Humboldt County, California, where 80-foot canyon walls are clothed in thousands of lush plants, and where parts of “Jurassic Park 2: The Lost World” were filmed.

And then, consider joining the American Fern Society, where you can exchange information and spores with other fern fans.

Do you fiddle with ferns? Tell us about your passion for this plant in the comments section below.

And for more information on growing plants that thrive in the shade, check out these guides next:

A former garden editor for a daily newspaper in Austin, Texas, Gretchen Heber goes through entirely too many pruners and garden gloves in a year’s time. She’s never met a succulent she didn’t like and gets really irritated every 3-4 years when Austin actually has a freeze cold enough to kill them. To Gretchen, nothing is more rewarding than a quick dash to the garden to pluck herbs to season the evening meal. And it’s definitely time for a happy dance when she’s able to beat the squirrels to the peaches, figs, or loquats.
More Posts
Subscribe
22 Comments
Oldest
Newest Most Voted
Inline Feedbacks
View all comments 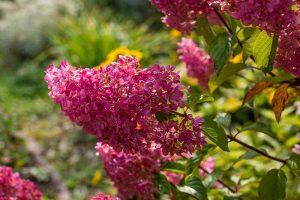 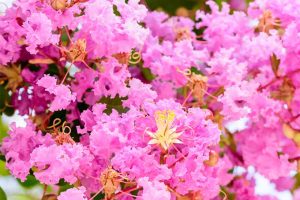