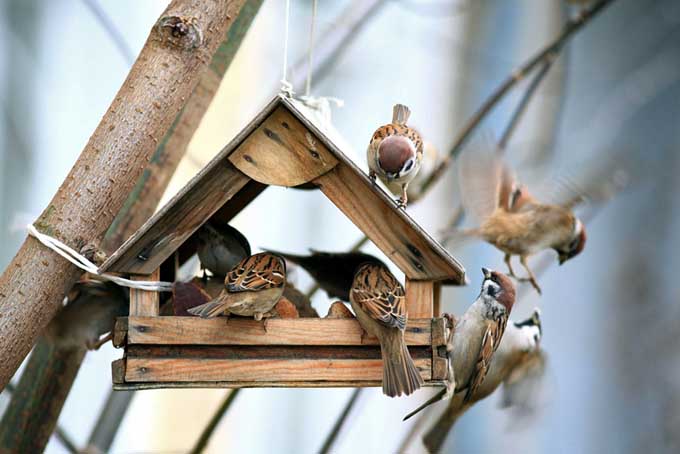 One of my favorite things to do during the winter is to put food out for the birds.

Not only does this activity nourish the birds during the hardest time of the year, but I find it immensely entertaining to watch who comes in for dinner.

For several years, I served as one of Cornell Ornithology Lab’s “backyard scientists” by counting and identifying the many birds that hung out at my feeding station.

I poured a generous line of black oiled sunflower seeds along the four-inch-wide railing around my patio and counted as nearly a hundred grosbeaks feasted on the seeds. If disturbed, the whoosh of their flight sounded like a jet engine.

Mountain chickadees also dared to fly in, grab a seed, then take it to a safe place to crack open and eat at their leisure. These intrepid little birds stayed the entire year in the mountains, while the grosbeaks were visitors from lower elevations. 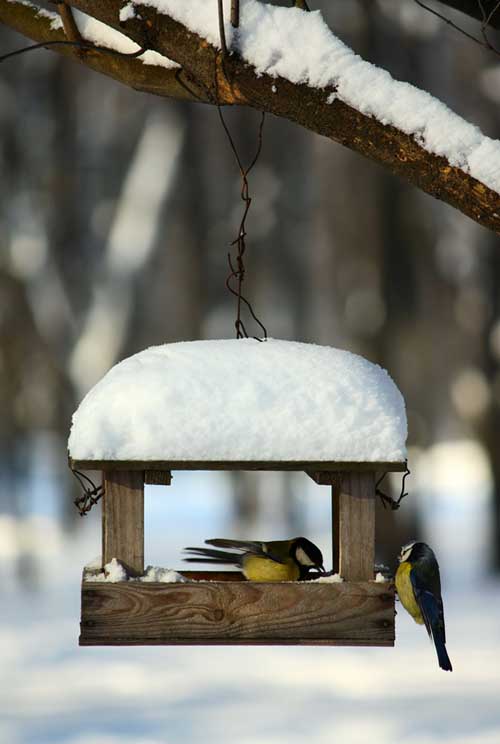 The key to attracting a wide variety of birds was the seeds. Standard wild bird seed contains milo, which attracts ground feeders, but most birds in our neighborhood ignored it.

The richer the seed, the more kinds of birds appear at the feeder.

What they came for was the oily, tasty and substantial black oiled sunflower seeds.

That’s all I put out for almost a decade and we had juncos, chickadees, Stellar’s jays, evening grosbeaks, and pine siskins. I got so I could identify them by their sounds as well as their appearance. 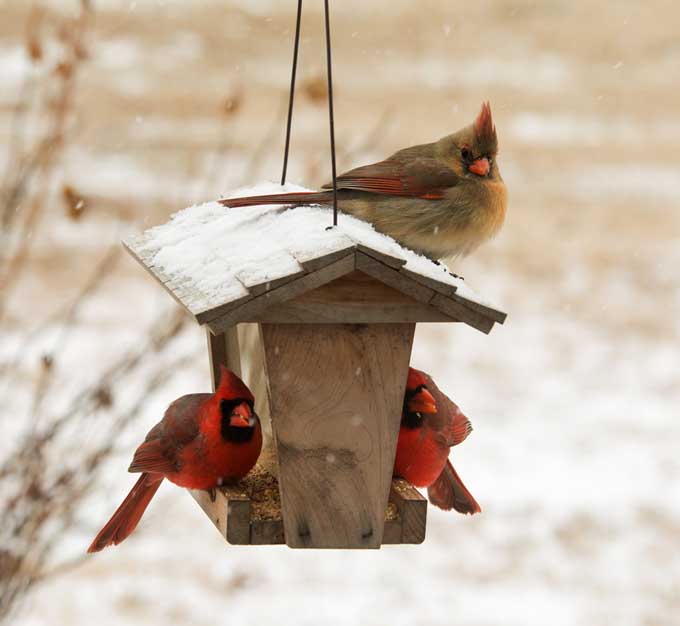 Most people believe that human development encroaching upon animal habitat destroys food sources and shelter, but that’s not necessarily the case.

When we lived in Truckee, California, it appeared that wildlife actually increased its presence as more houses filled in the landscape and the animals became more accustomed to people.

Because our HOA didn’t allow fences between properties, deer, bears, and coyotes could migrate freely among the houses. As houses increased in number, oddly enough, we saw more deer, coyotes, and bears.

It seems counter-intuitive, but such neighborhoods mean safety from hunters, if not from traffic, and some interesting food resources.

Bears not only found a smorgasbord of garbage from which to eat, they also sheltered under decks and inside ice caves formed where heavy snows bridged between eaves and high drifts. Over time, this snow hardened into what is affectionately called Sierra Cement.

I watched as a pair of ravens discovered a cozy shelter under the roof line of a house; a beam jutted out from under the roof ridge, making a handy landing spot.

When homeowners such as myself put food out though, the birds soon find out about it and the crowd builds throughout the season.

It became a post-Christmas tradition to put the tree out on the porch and slather its limbs with peanut butter. Chickadees loved it. In fact, the chickadees were so desperate for the fat in this sticky treat; they would fly around me as I layered it on the branches.

One courageous (or maybe just starving) little chickadee actually landed on the end of the knife and plunged his beak into the peanut butter. Because birds don’t store fat, rich foods help birds survive the Sierra Nevada’s frigid winter.

There’s also a risk, however, that bigger animals will discover an easily-accessible feeder, especially if suet and other oily foods are used.

A squirrel soon found our peanut butter tree and often chased away the chickadees.

The biggest danger for such feeders, though, is bears. We were lucky that bears didn’t regularly visit Sue’s Diner, as we called it. Only twice did the sunflower seeds entice bears.

One night, my dog needed to go out. Just outside the door, he yelped in surprise. When I checked to see what the problem was, there was a huge bear feasting on the birdseed left from the previous year.

To my relief, he seemed quite content to ignore both me and the dog.

The second bear adventure attracted a trio of orphaned cubs. One looked like a yearling while its two siblings were younger. The smallest stood to check out the BBQ and only came up to waist height.

They were digging the sunflower seeds out of a crust of ice on the railing. For hours, we watched as they lay on the snowdrift and mined the seeds.

When I saw how emaciated the smallest cub was when he stood, I wanted to throw the remaining seeds from the sack to them. But that would have been a tragic mistake.

There was a very good chance I may have been injured doing so, but more importantly, the bears would have returned to raid the feeder throughout the winter.

I would have taught those youngsters to eat human food instead of their natural and healthier diet, thus creating a trio of problem bears who would most likely be killed by wildlife rangers in the future.

As you can see, bird feeders can bring adventure and wonder to your doorstep, but they can also bring danger.

Need one or more bird feeders for your home? Be sure to check out our buying guide here. 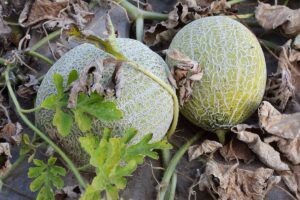 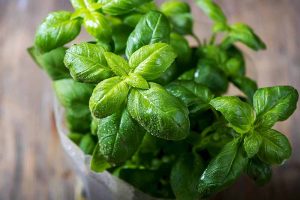