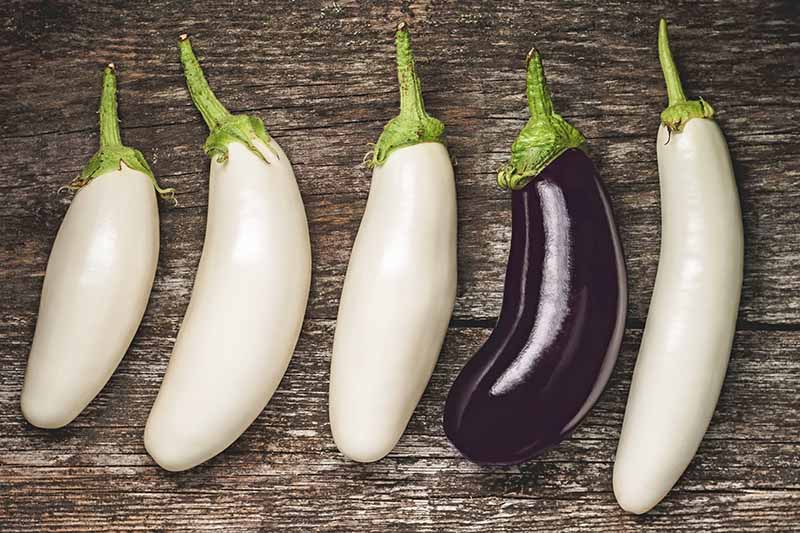 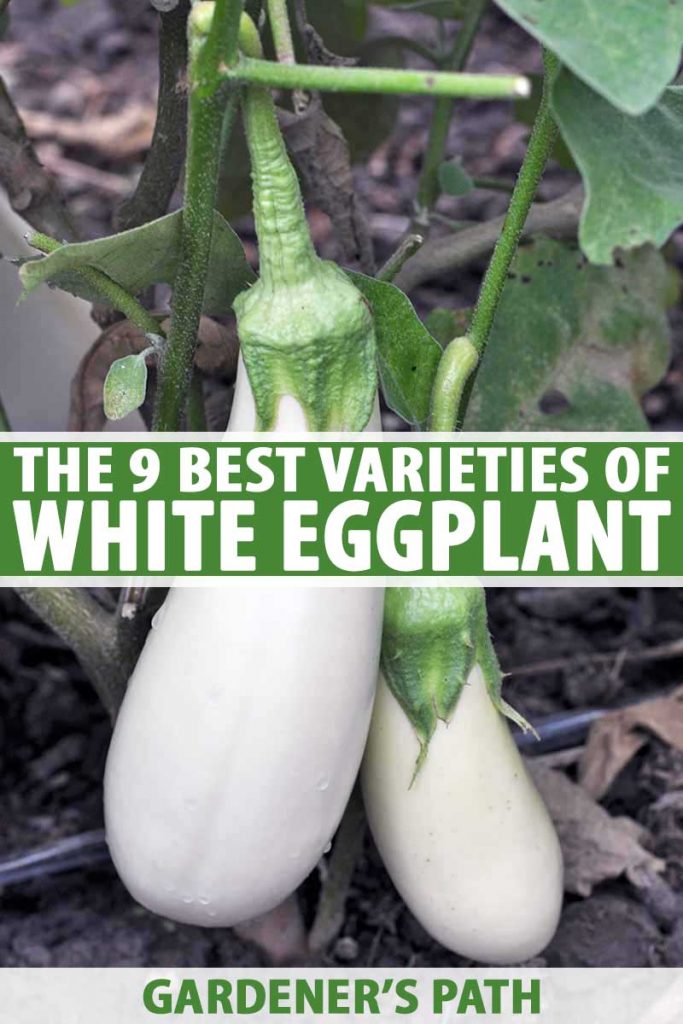 When I hear the word eggplant (Solanum melongena), I immediately think of my all-time favorite Mediterranean dish, the smoky, garlicky baba ghanoush.

The next thing I think of is eggplant’s famous color, that deep, gorgeous, intense shade of… white?

White eggplant? Let’s explore, shall we?

Have you ever wondered how our deep, dark purple eggplant got its rather vivid and seemingly meaningless name?

Raw, this large purple vegetable doesn’t look anything like an egg. When cooked, it doesn’t taste or look egg-like either.

So how did the word “egg” become attached to an aubergine, etymologically speaking?

Here’s how: In England in the 1700s a new vegetable made an appearance on the culinary scene. This vegetable was white, small, and shaped just like an egg.

It didn’t take much imagination to decide what to call this new vegetable: eggplant. The name endured, and encompasses the purple varieties, too.

There are still many cultivars of the white eggplant around today. Some are old heirloom varieties, while others are more recently cultivated hybrids.

And the fruits of these varieties come in all sorts of shapes and sizes – small and round, long and thin, or plump and oval.

I’m going to take you on a tour of nine cultivars that span all shapes and sizes, providing for a wide array of culinary uses. See our full guide if you are new to growing eggplant in your garden.

9 of the Best White Eggplant Varieties for Your Garden

Compared to purple varieties, many of the white cultivars have thinner skin, which is why they aren’t usually seen in supermarkets.

Thin skins mean they bruise more easily during transport, resulting in less-than-perfect-looking produce at the store.

When you’re growing your own produce in your backyard, however, you don’t have to worry about transporting your crop nearly as far, so thinner skins might not be an issue for you at all.

And by the way, thin skin also comes with an advantage:

According to Dr. Leonard Perry, Extension Professor at the University of Vermont, along with their seeds, much of the bitterness associated with eating these vegetables comes from compounds contained in the skin.

Less skin equals less bitterness, so if the bitter flavor of purple eggplant has gotten in the way of your appreciation for this vegetable before, maybe it’s time to give it a second chance.

Some of these albino-looking varieties have much a sweeter taste than the purple ones, opening up possibilities for new and unexpected flavor experiences. Sounds like reason enough to give them a try to me!

9 of the Best White Eggplant Varieties for Your Garden

Ready for your tour through the world of unpigmented eggplant? Let’s go! Here are nine of my favorite white eggplant varieties to grow in your garden.

‘Casper’ is a French heirloom cultivar that is quite unique among eggplants.

Unlike most heat-loving varieties of this vegetable, ‘Casper’ actually thrives in the cooler days of the growing season, slowing down its production in the hottest part of the summer.

However, it is still frost sensitive, so don’t go planting it with your cool season crops.

This is good news for those of us with short summers who don’t always have enough time to bring those varieties that take longer to mature all the way to harvest.

On the other hand, gardeners in areas with long, hot summers would do well to pick a different variety.

‘Casper’ plants will reach two to three feet tall at maturity, with elongated fruit that are almost entirely free from compounds that cause a bitter flavor.

These have a mild, almost mushroom-like flavor, along with meaty flesh and a silky texture. They are best picked whey they reach 6 inches in length.

‘Casper’ is an open-pollinated cultivar, so saved seeds will grow true if the plants are isolated from other varieties.

Seeds for ‘Casper’ are available in packets of various sizes from Eden Brothers.

Staying in Europe, but moving from France to Italy, ‘Clara’ is an Italian hybrid that produces a prolific harvest in 65-70 days.

The early maturing, bright and creamy fruits of ‘Clara’ are cylindrical in shape, reaching six to seven inches long and four to five inches wide.

With thin skin that bruises easily, you’ll want to use the fruits quickly once they are ripe.

‘Clara’ eggplant have a mild taste with nutty undertones, and a meaty, creamy texture.

As you may have noticed with ‘Caspar,’ references to ghosts abound among pale vegetable varieties. ‘Ghostbuster’ is another such example.

This hybrid offers a mid-season harvest, maturing in 72-80 days.

‘Ghostbuster’ plants can become quite large.

With their semi-spreading growth habit, it’s not unusual for plants to grow to five feet tall with a four-foot spread at maturity.

The fruits of ‘Ghostbuster’ are oval shaped, measuring up to six to seven inches long and four inches wide.

Reaching maturity in just 50-60 days, it is one of the earliest maturing white varieties we could find. This hybrid was a winner of the All America Selections Vegetable category in 2009.

The plant can grow to three to four feet tall with a two- to three-foot spread at maturity, and does well in containers.

‘Gretel’ has elongated fruit that are typically picked small, at three to four inches long. If left to mature, these will develop purple stripes.

This variety bears fruits that are sweet and never bitter, with few seeds, and skin that remains tender even when harvested late.

‘Gretel’ seeds in packets of 100 are available from True Leaf Market.

‘Japanese White Egg’ is a heavy-yielding heirloom that will produce egg-shaped fruit, hearkening back to the origins of this vegetable’s name.

Ripening early, this container-friendly plant will reach maturity in around 65 days.

The fruits of this variety are shaped like large eggs, about two to three inches long, and at their peak they are rich and creamy tasting.

However, they will develop a bitter taste when they turn yellow, so make sure you harvest them before they start to change color.

‘Paloma’ is another hybrid that is perfect for short-season growers. Plants are vigorous and highly productive, reaching maturity in just 65 days.

What’s different about ‘Paloma’ are the bell-shaped, lightly ribbed eggplant it bears.

Highly productive, ‘Snowy’ will mature in around 60 days, and is well suited for containers.

Unlike ‘Clara,’ our other cylindrical selection, ‘Snowy’ is open-pollinated so you can save seeds for future plantings.

‘Snowy’ bears snow-colored eggplant that reach a hearty eight to 10 inches long and have a delicate, sweet, and mild flavor with no bitter undertones.

Fruits hold up well during cooking, thanks to their medium-to-thick skins and firm texture.

Seeds for ‘Snowy’ are available in a variety of package sizes from True Leaf Market.

You’d be forgiven if you mistook this eggplant for an heirloom tomato.

The fact that these two nightshade members of the Solanaceae family are related is easy to see when you look at fruits from this cultivar.

‘Thai White Ribbed’ produces its fruit on two- to three-feet-tall plants and takes up to 90 days to mature, so it is more suited to areas with a long growing season.

This variety bears eggplant with a flattened round shape with deep ribbing – looking uncannily like albino heirloom slicing tomatoes.

The three- to four-inch fruits have a mild flavor, and a smooth and creamy texture.

Shaped like shooting stars, ‘White Comet’ is a Japanese type that has very few seeds, and is totally without any bitter flavor.

These hybrid plants reach two to three feet tall and mature in 70 days.

‘White Comet’ bears fruits that are thin-skinned, sweet, and meaty.

A Plant By Any Other Name

Now that you’ve had the tour of these nine white cultivars, are you ready to put the egg back in your eggplant?

Which of these varieties sounds like it needs a spot in your garden? I’d love to hear about your plans in the comments.

Personally, I’m ready to put every one of these varieties into my next batch of baba ghanoush.

And by the way, there’s a brilliant recipe for a baba ghanoush-hummus mashup over at our sister site Foodal.

Check it out if all this talk of eggplant has your mouth watering as much as it does mine.

If you’re interested in growing other tasty nightshades in your garden, dig in to these articles next:

And be sure to take a look at our 21 of the Best Japanese Eggplant Varieties guide to find some of the most recommended Asian cultivars. 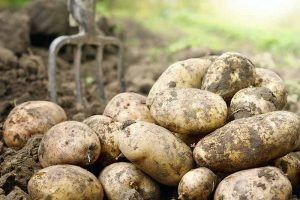 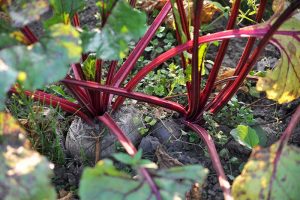 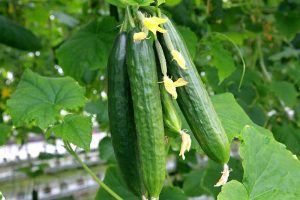 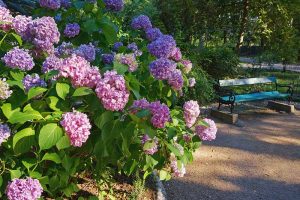 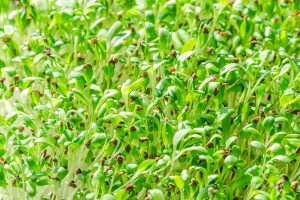