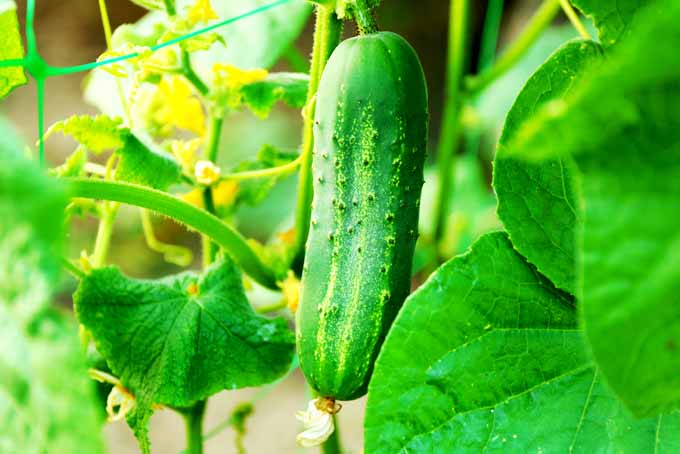 Cucumber’s anti-inflammatory benefits have earned the vegetable a starring role in practically every “woman at a spa” image ever made. 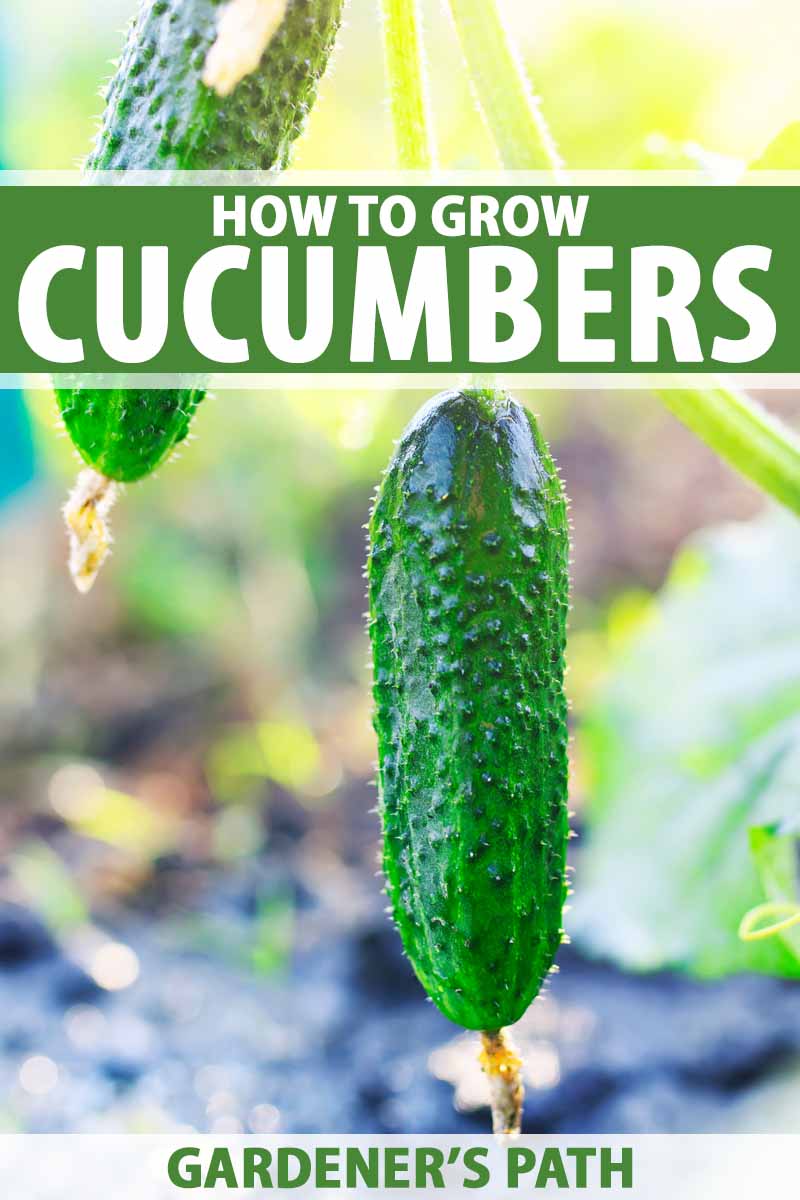 And pretty much everyone knows the satisfying crunch cucumbers (Cucumis sativus) add to salads and sandwiches. They’re also most enjoyable in sushi or even simply sliced and seasoned.

And while, yes, there’s pickled okra, pickled peppers and pickled carrots, when the patty hits the bun, it’s pickled cucumbers we crave on our big, juicy burgers.

So let’s learn how to grow this oblong green edible, which is technically a fruit since it bears seeds, but is used in the kitchen as a vegetable.

From India to Spain to the US

According to the University of Arizona, cucumbers are believed to have originated in India, which possibly explains raita, the cooling condiment served up from that nation, in which cucumber is a primary ingredient. 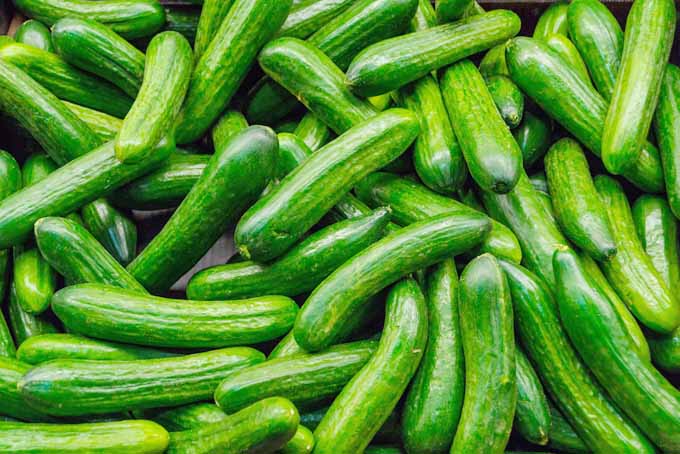 Perhaps ironically, Christopher Columbus, in his search for India and the East Indies, instead found Haiti. Many sources credit him as the first to share cucumbers with this part of the world.

From Hispaniola, the green fruit traveled north, where we have enjoyed them ever since (except for a regrettable period in the late 1600s when consuming raw fruits and vegetables was deemed to be dangerous!).

Long and Green, Round and Yellow

These are the table cukes, the ones we enjoy in a salad or even a soup.

Of the slicers, you’ll find varieties containing seeds, and types that don’t. These are often called “burpless” because they don’t contain the burp-causing compound cucurbitacin.

These are the shorter, stubbier fruits whose thin skins allow pickling liquid to be better absorbed by the cucumber.

Of the slicers, gardeners have had good luck with ‘Burpless #26 Hybrid,’ and ‘Spacemaster 80,’ which has been adapted to a variety of climates.

If you’re looking for something out of the ordinary, consider adding ‘Lemon’ to your garden; you’ll get baseball-sized yellow cucumbers.

For pickles, ‘Boston Pickling’ is wildly popular, while ‘Bush Pickle’ is a bush-type fruit with a shorter growing season of just 50 days to maturity.

Mountain Valley Seed Co. is a great resource for all of these cucumber varieties, and more.

Cucumbers like warm soil, no cooler than 70°F, according to the Oregon State Extension service, so when springtime warms your soil all all danger of frost is past, it’s time to get planting.

Put them in a spot that gets eight to 10 hours of full sun a day. 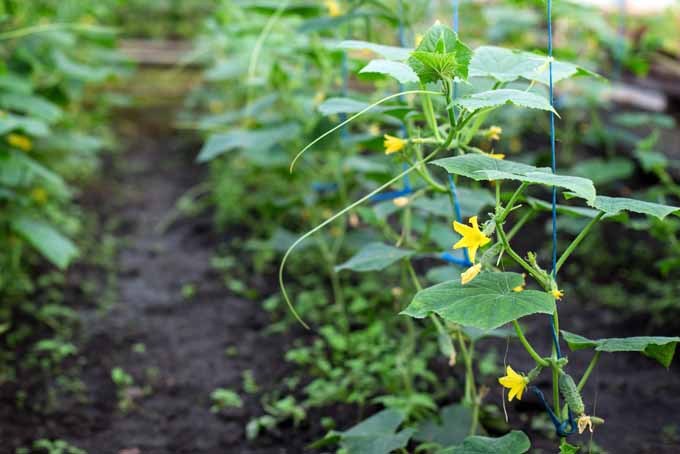 Although they prefer sandy soil, cucumbers can be grown in any well-drained soil. This plant grows best in slightly acidic soils with a pH range of 5.8-6.5.

A sprawling, viney plant, cucumbers need space to spread out, or a trellis to climb.

These plants send down a very deep tap root, so make sure there aren’t tree roots competing for resources 3-4 feet down.

You can buy starts from garden centers, but planting cucumbers from seed is so easy, there’s little reason not to go with this option.

Well, unless your resident squirrels dig up and eat the seeds. Repeatedly. Grrrrrrr.

In rows or hills, plant seeds 1 inch deep; they’ll germinate in five to 10 days. Thin seedlings to every two feet.

Plant transplants two feet apart in rows four feet apart. The Utah State University Cooperative Extension cautions against damaging the roots when transplanting, because this can slow establishment and growth. Transplants should have one or two true leaves and no runners.

As always, apply a thick layer of organic mulch to aid in moisture retention and weed reduction.

In addition to the aforementioned deep tap root, cucumber plants have many shallow roots, so they require ample soil moisture at all stages of growth. Water weekly, and give the plants about 1-2 inches of water using drip irrigation if possible. 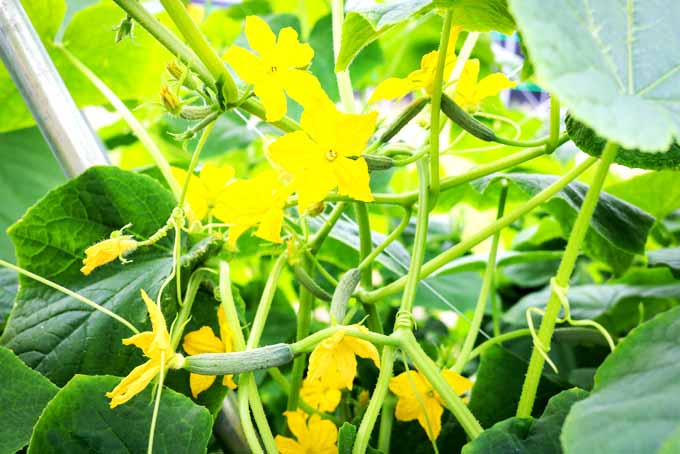 Inconsistent watering can stress plants and cause bitter, misshapen fruits.

Keep the growing area as weed-free as possible, but don’t hoe, as you might damage the shallow roots.

USU recommends applying a side dressing after the vines develop runners, but before the plant starts to flower. They recommend a “nitrogen fertilizer (21-0-0) using 1/4 cup per 10 feet of row.”

What do Kids and Aphids have in Common?

In addition to seed-stealing squirrels, you’ll want to watch out for aphids, which can be controlled by insecticidal soaps or a strong stream of water, and for cucumber beetles, which often require chemical treatment.

Powdery mildew — identified by white patches on older leaves — is a pesky problem in cucumbers. If this disease is common in your area, select varieties that are resistant.

Also look out for wilt diseases, and treat as applicable to the particular type of disease.

Cucumber plants with light green, mottled, malformed, dwarfed, or curled leaves may be victims of a virus. You’ll have to destroy any severely affected plants.

Like kids who don’t wash their hands, aphids are often the culprit, spreading viruses from plant to plant. So be sure to control those little buggers. Both types. 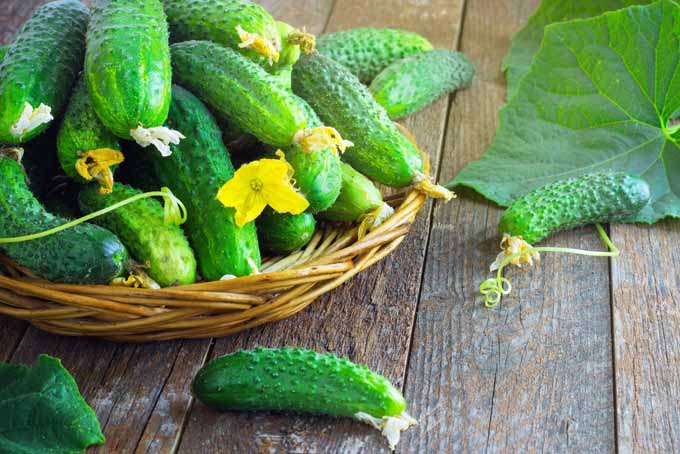 Cut the fruits from the vine when they are crisp, green, and tender. Check individual varieties for desired length; if cukes grow too large, they can become bitter. If normally green varieties are allowed to go yellow, they will have an overly strong flavor.

Store slicing cukes in the crisper area of your fridge for up to three days. Pickling cucumbers will keep a bit longer and don’t necessarily need to be refrigerated.

The humble cucumber — puffy eye reducer, hamburger perfector, and gazpacho must-have — is a worthy addition to any summer garden. Dazzle friends and family not only with your tasty cooking, but also with your youthful appearance — all from this versatile plant. 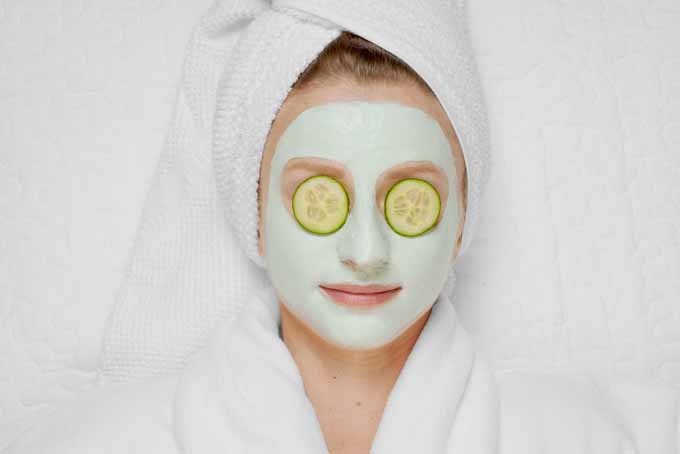 How cukey are you? Got some growing in your garden? Tell us what zone you’re in and what your favorite varieties are.

If you’d like to try out your hand out out growing a few (or many) vines, be sure to check out our Top 33 Cucumber Varieties to Grow at Home to help you decide on various cultivars for pickling, fresh eating, and more!