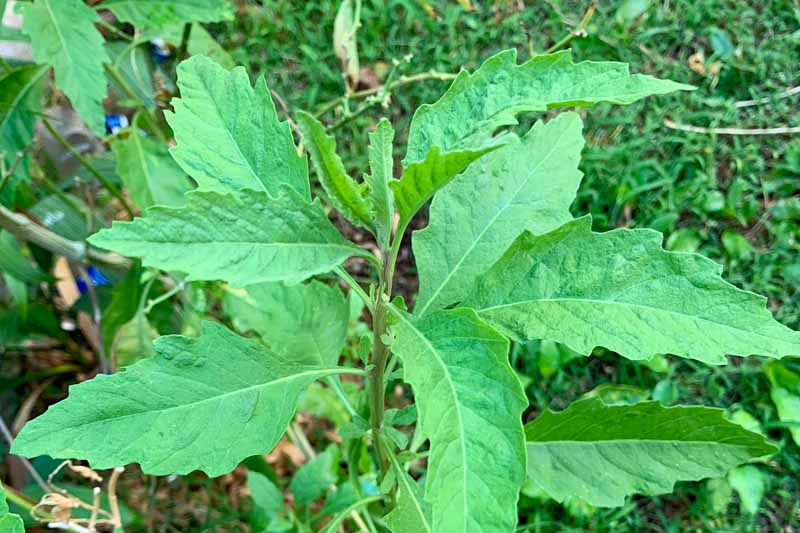 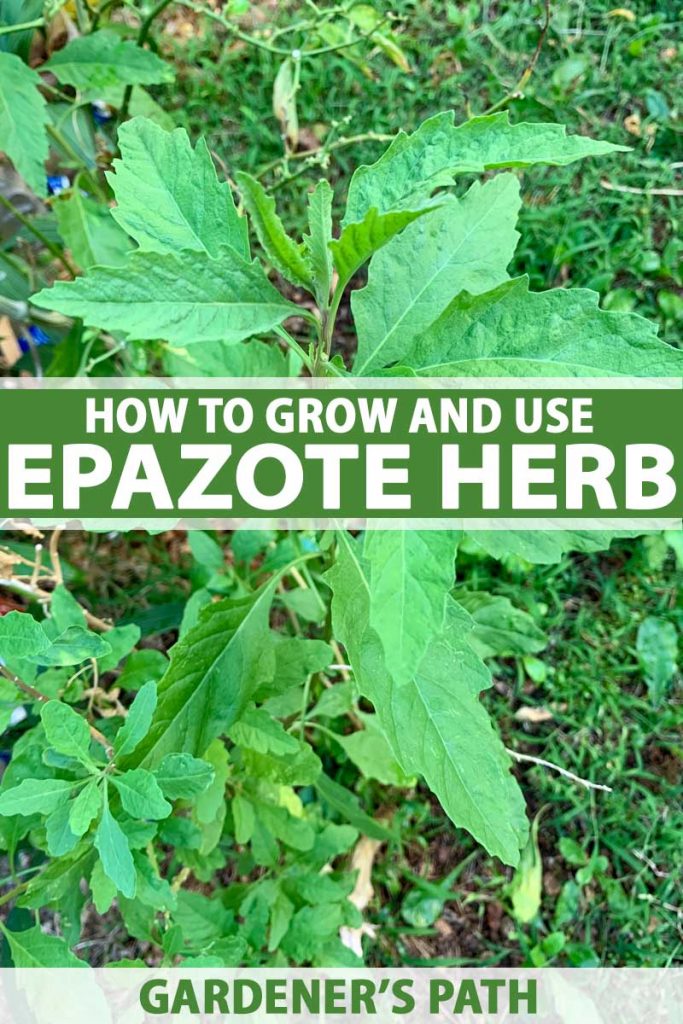 Show of hands – who’s ever heard of epazote? If you’re a fan of southern Mexican or Guatemalan food, you may be familiar with this ingredient, which is comprised of the leaves and stalks of the epazote (eh-puh-ZO-tay) plant.

This plant is considered a weed by some, but proudly cultivated by others who treasure its unusual flavor, described by some as “earthy,” or as having lemony, acidic qualities.

Other tasters compare it to a stronger version of oregano, anise, fennel, or tarragon. It’s also been called spicy.

You may also see this herb called wormseed (more on the genesis of this nickname in a minute), Jesuit’s tea, or Mexican tea. Botanically, the plant was once known as Chenopodium ambrosioides.

Interestingly, epazote is considered a carminative, well-known for its, ahem, flatulence-reducing properties. One can only assume this is why it is a popular flavoring for bean dishes. 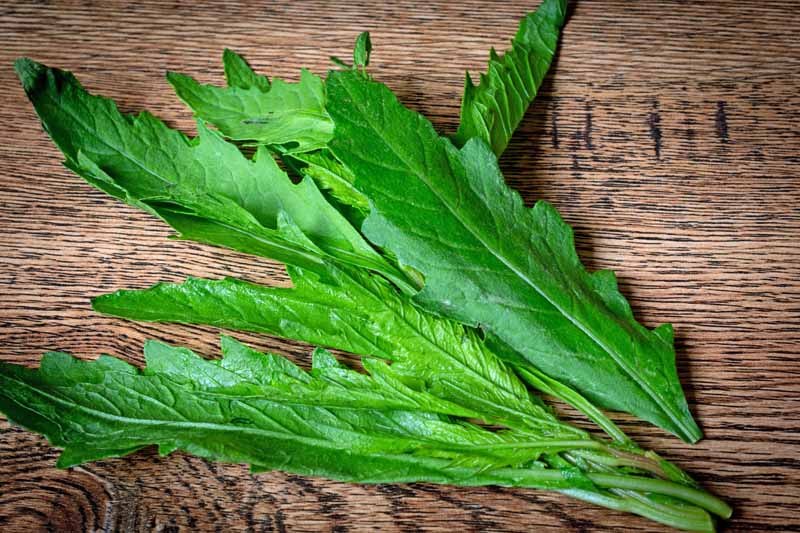 Gardeners in Zones 4-12 can grow this plant. In the more northern zones, the plant is typically grown as an annual, though it does tolerate a bit of frost, so can be overwintered in warmer climates.

Before we get too far into our exploration of this plant and how to cultivate it, I would be remiss if I didn’t mention that if you were to eat a dump truck full of epazote, you may experience some awful side effects, as it is poisonous in large quantities.

It contains the toxin ascaridole, which can potentially cause deafness, vertigo, paralysis, incontinence, jaundice, sweating, and even death.

So just enjoy it in the occasional taco and discourage young children and pregnant people from consuming the herb.

Native to southern Mexico, Central America, and South America, epazote has been used in the cuisines of these areas for centuries. It is believed that the Mayans used it both culinarily and medicinally. 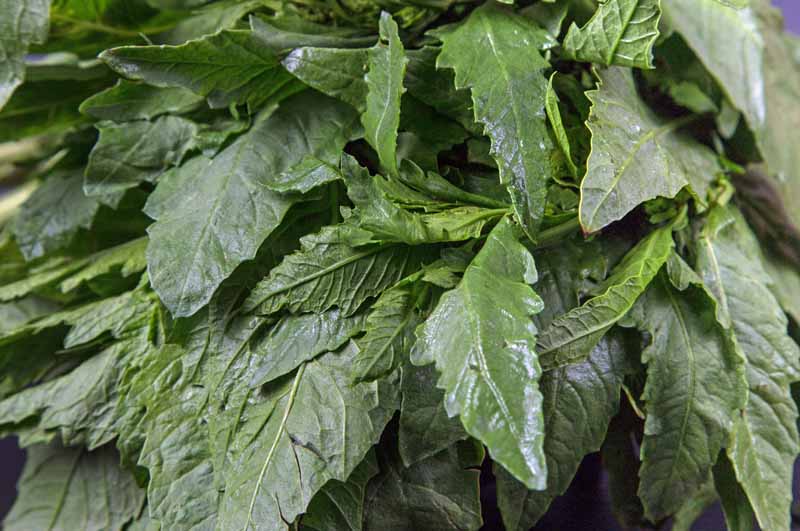 Notably, the herb contains a chemical called ascaridole, which repels intestinal worms. For centuries, people around the world used D. ambrosioides to purge worms from their systems.

Until antiparasitic drugs became available in the 1940s, many thousands of gallons of Baltimore Oil, also known as wormseed oil, were produced as a household remedy for hookworm in pets, livestock, and humans. In the 1930s and ‘40s, more than 240 farmers in Carroll County, northwest of Baltimore, grew wormseed.

You can sow seeds indoors in early spring, or sow directly outdoors when soil temperatures have reached 70°F. If starting indoors, applying heat to the bottom of your seed trays will speed germination. 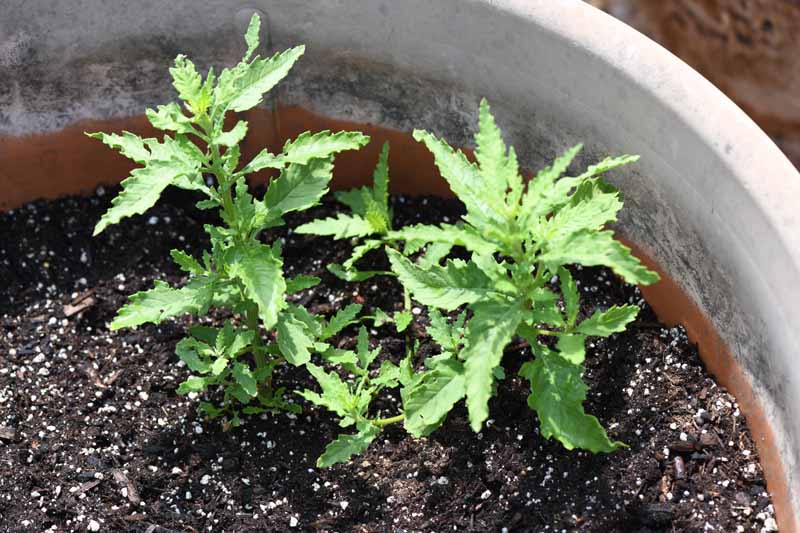 Soak seeds in water for 24 hours, and then lightly press seeds into the soil and add a scant layer of dirt on top. Keep the soil moist until germination occurs. Seeds should sprout in seven to 14 days – the germination rate of this plant is pretty good.

In order to have a continual supply of young leaves (more on this below), you might want to make successive sowings of this herb every two to three weeks.

Wormseed grows best in full sun. It is not particular about the soil in which it grows, though it does need a location that drains well.

If you really want to, you can enrich the soil with a wee bit of organic matter, but any additional fertilizer will result in less flavorful leaves. 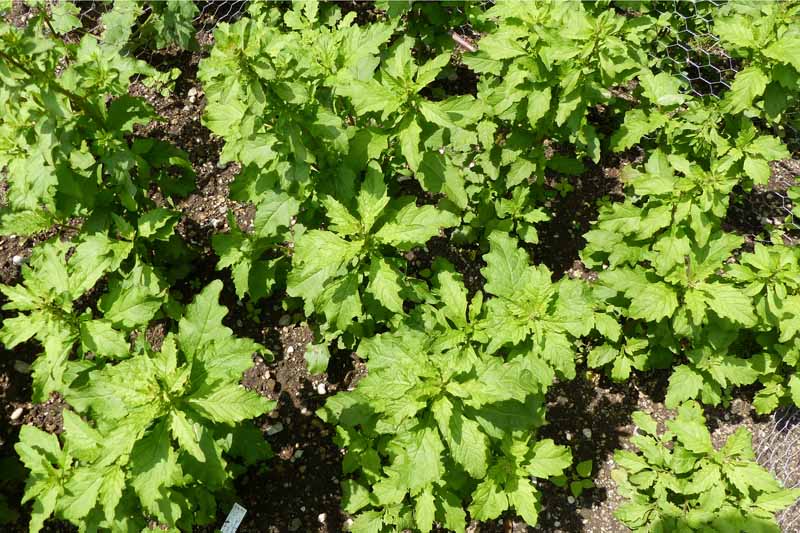 The plant prefers dry weather with a medium amount of water; it can tolerate some drought, but it really does better with regular watering.

Because of its attractiveness to predatory wasps and flies, it is sometimes intentionally grown near plants that are infested with insects that these beneficial wasps and flies like to dine on.

Near the end of the growing season, you can let the plant go to seed and collect the seeds to sow in the spring.

Simply rub the seed stalks gently between your fingers, collecting the seeds in a container beneath. Store the seeds in sealed container in a cool, try place.

You’ll find a packet of 50 seeds available from Frozen Seed Capsules via Amazon. 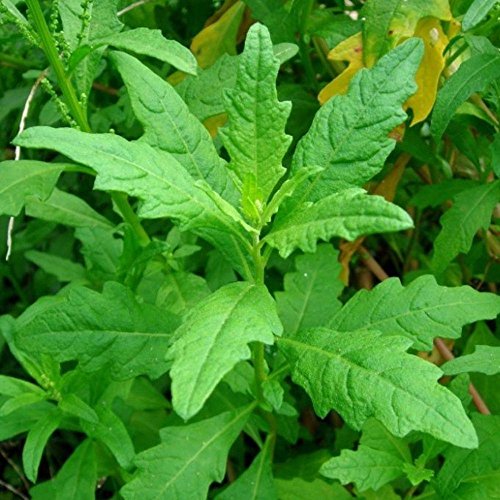 Your seeds will arrive in an air- and water-tight glass vial that’s filled with silica beads and organic cotton, which absorb moisture and offer a good long-term storage option.

While epazote’s strong scent wards off many potential pests, you may see thrips, which can be treated with insecticidal soap.

Thrips are a pain in the neck, not only for their propensity to suck essential fluids out of plants, but also for their ability to transfer viruses from plant to plant.

Epazote is considered a “host reservoir” for some viruses, including lettuce mosaic virus and tomato spotted wilt virus. This means the plant is infected with a virus but may or may not show symptoms.

Viruses typically show up as discoloration on the plant’s leaves. There is no treatment for viruses in plants; if the disease is severe, you will have to pull up and destroy the plants.

You can harvest epazote leaves about 55 days after the seeds are sown. Simply cut or tear young leaves from the center stem of plants. 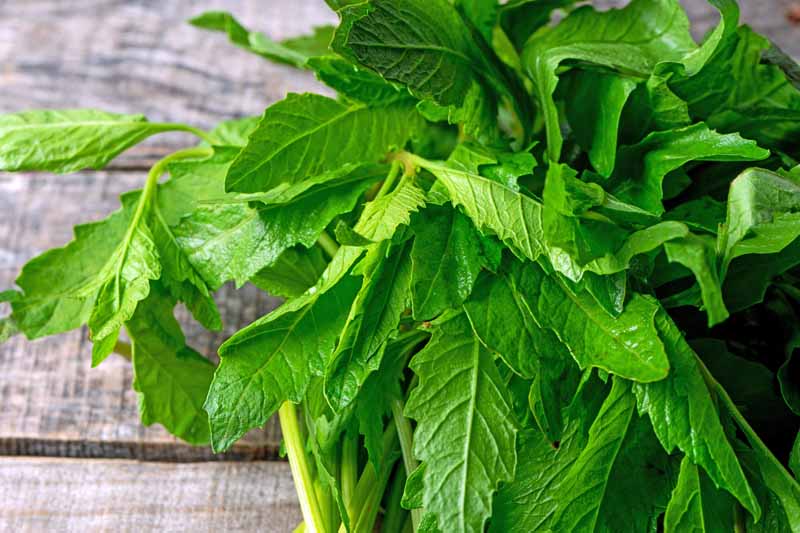 You can harvest and eat the older leaves, too, but they have a stronger flavor and should be used in small amounts. The younger leaves have a milder, yet richer, flavor.

If you’re harvesting leaves in advance of when you need them, wrap them in a damp paper towel, place in a zip-top bag, and store in the refrigerator, where they will keep for about three weeks. Alternatively, you can store stems upright in a glass of water in the fridge.

Epazote leaves can be dried and used later.

If you’re bumping up against a blizzard and want to get your plants out of the ground before they’re buried in snow, pull the entire plant and hang it upside down in a cool, dust-free room. Make sure there’s plenty of room between each stalk, with adequate airflow to prevent mold. 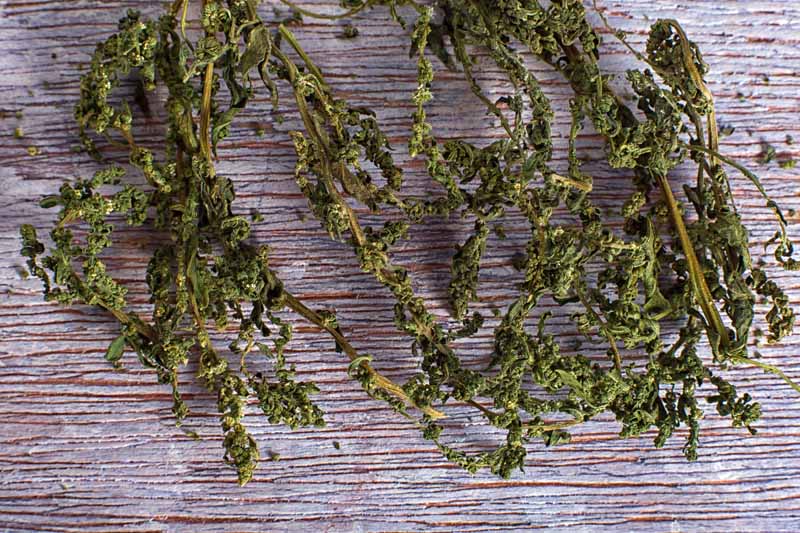 Check them after seven to 10 days; if the leaves appear dry and they crumble easily, they are ready for storage. Take your stalks down, remove the leaves, and discard the stems.

Store the leaves in a jar with a tight-fitting lid in a cool, dark place. Remove and crumble leaves as you need them. 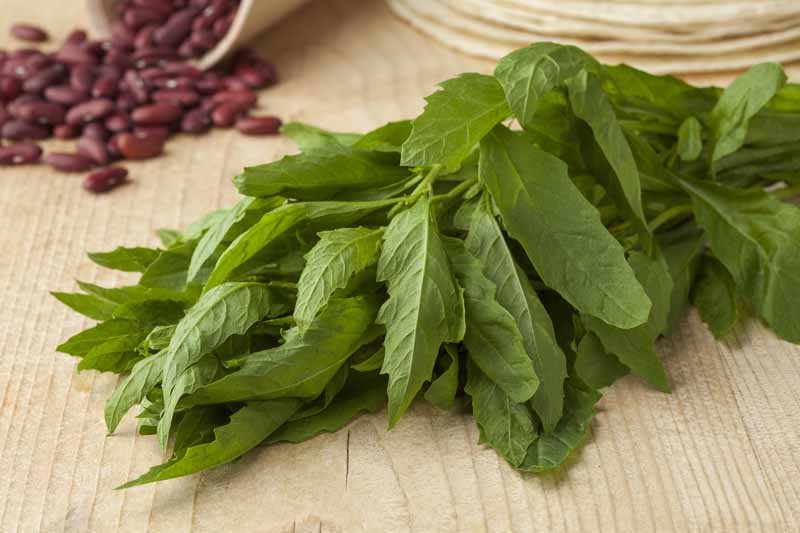 In addition to its use in bean dishes, it also makes a flavorful addition to soups, egg dishes, corn dishes, and mole sauces. It’s also used around the world to make tea.

This plant is a good source of vitamins A, B6, C, and D, as well as dietary fiber, iron, and calcium. But keep in mind that it should only be consumed in small quantities, and as such, will not provide a significant amount of any of these nutrients.

Invite the Neighbors Over for a Big Pot o’ Beans

If you want to grow something that perhaps no one else on your block is growing, epazote may be just the plant.

It’s very easy to grow, and indeed is so amenable to a variety of conditions that it has weedy tendencies.

If you can keep it contained, however, and enjoy cooking and eating Mexican and Central American cuisines, how wonderful would it be to have a fresh supply of this tasty herb?

Would you like to expand your herb garden even more? Check out these articles:

The staff at Gardener’s Path are not medical professionals and this article should not be construed as medical advice intended to assess, diagnose, prescribe, or promise cure. Gardener’s Path and Ask the Experts, LLC assume no liability for the use or misuse of the material presented above. Always consult with a medical professional before changing your diet or using plant-based remedies or supplements for health and wellness.

A former garden editor for a daily newspaper in Austin, Texas, Gretchen Heber goes through entirely too many pruners and garden gloves in a year’s time. She’s never met a succulent she didn’t like and gets really irritated every 3-4 years when Austin actually has a freeze cold enough to kill them. To Gretchen, nothing is more rewarding than a quick dash to the garden to pluck herbs to season the evening meal. And it’s definitely time for a happy dance when she’s able to beat the squirrels to the peaches, figs, or loquats.
More Posts
Subscribe
1 Comment
Oldest
Newest Most Voted
Inline Feedbacks
View all comments

Detailed and thorough. Thanks