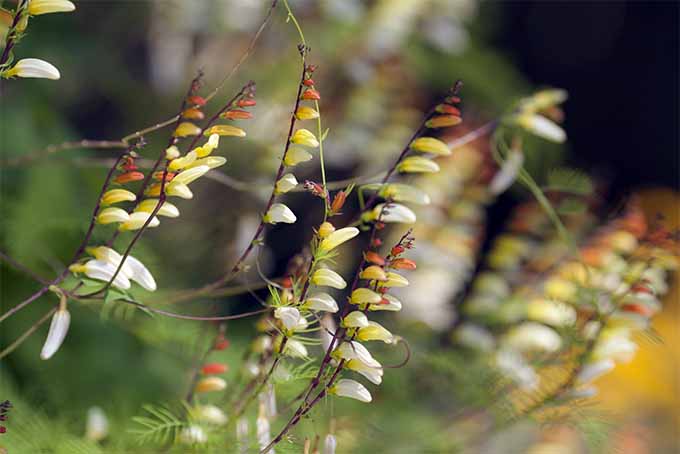 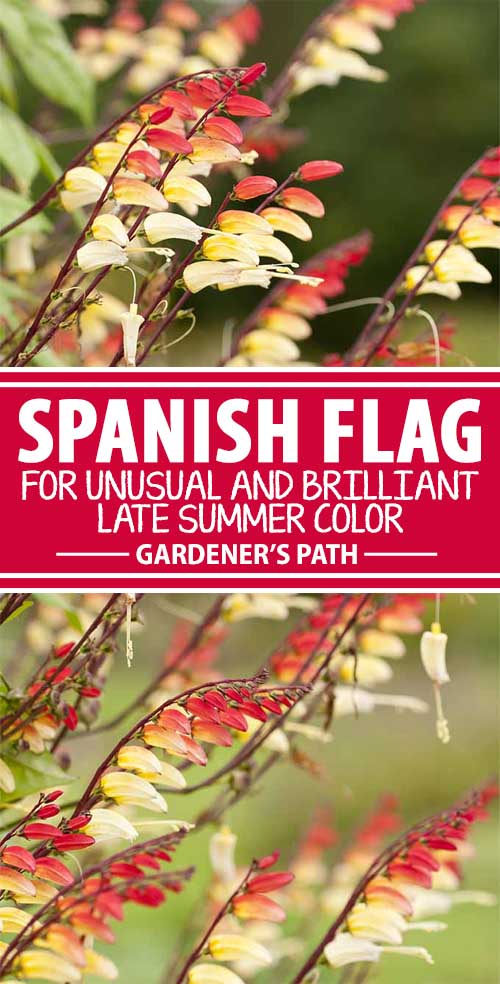 Shooting up almost as quickly as one of its many nicknames, firecracker vine can grow close to 10 feet in a month, racing up trellises and fences and launching attractive red, banana-shaped flowers that gradually fade to a cream color.

Properly known as Ipomoea lobata, firecracker vine is also known by two former scientific names, Mina lobata and Quamoclit lobata and by a colorful array of other nicknames including Spanish flag and exotic love vine.

Its most recent Latin name, Ipomoea lobata, is particularly distasteful to many gardeners because while indeed being botanically related to Mexican morning glory (I. tricolor), common morning glory (I. purpurea) and others in the Ipomoea genus, firecracker vine’s flowers look nothing like morning glory flowers.

If not using one of its non-scientific names, many gardeners simply call the plant “mina lobata.”

Mina lobata is native to Central and South America. It made its way to Mexico where visiting Spaniards gave it one of its monikers and took it home to Europe.

A German seed house made the plant available in the United States in the late 19th century, and it has enjoyed varying degrees of popularity here ever since. 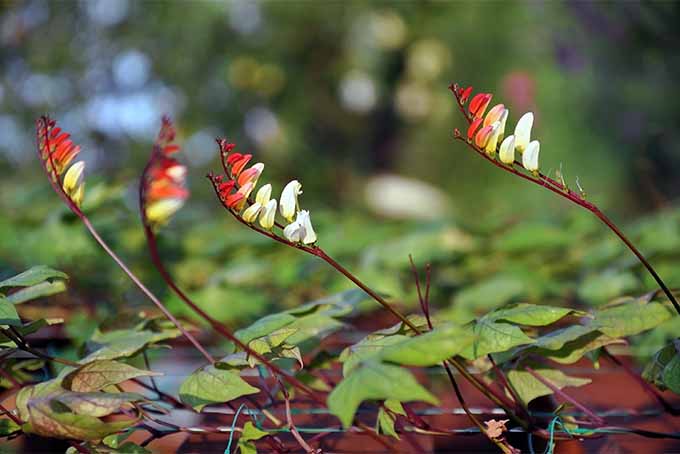 Grown as an annual in some climates, in others Spanish flag is actually characterized as a weed – much like its cousin, morning glory – for its speedy and aggressive growth habit.

It typically flowers in late summer and well into autumn, making it an attractive addition to colorful fall landscapes.

In the south, this vine will overwinter quite well, whereas northerners will have to plant afresh each summer.

As they age and change colors, the blossoms remain vertically arranged on one side of the stem as new red blooms are produced at the top of the floral stem.

This results in a stunning cascade of colors that exhibit the flag-like appearance for which the plant is known. 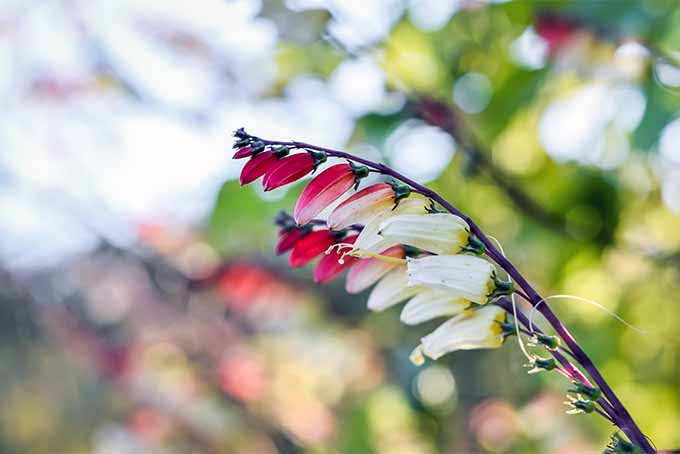 Though generally just one flower on a stem becomes fertile, thrusting out pistil and stamens, the flowers’ nectar attracts hummingbirds and bees.

These leaves are shed as the season progresses, so you might want to plant low-growing screen plants in front of the base of the vines.

Firecracker vine prefers, and will flower sooner, in full sun but will also do well in a bit of shade. Heat is no problem for this plant.

It appreciates rich, moist, well-drained soil, and will tolerate soils that are mildly acidic to mildly alkaline. 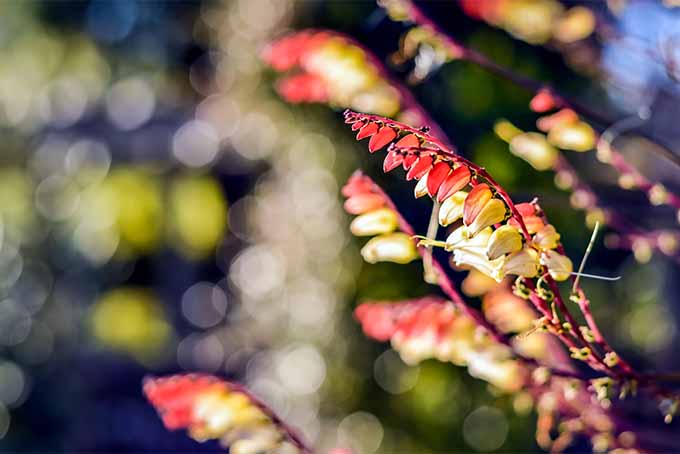 After soaking seeds for 24 hours, start seeds indoors in late winter or early spring and transplant when all danger of frost has passed. Or directly sow soaked seeds outdoors when freezing temperatures are a winter memory.

Mina lobata makes an attractive container plant if you give it something to climb on and keep the soil moist.

You can find seeds for Spanish flag from Seedville via Amazon. 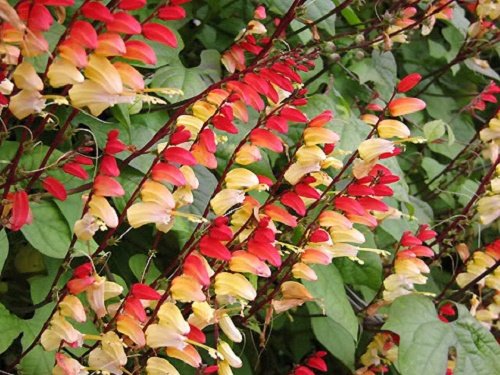 Each package contains 10 seeds and plants should be spaced nine to 12 inches apart.

Provide your vines with a high-nitrogen fertilizer at the beginning of the growing season, and switch to a high-phosphorous mixture before the plant blooms.

Keep an eye out for red spider mites and whiteflies, and treat with an insecticidal soap or diatomaceous earth if necessary.

Firecracker vine is also susceptible to white blister, rust, fungal leaf spots, and wilts. Use fungicides to combat these diseases.

A Fence of Many Colors

This fast-growing, tall vine dazzles with its unusual spray of colorful blossoms. Imagine a sun-splashed fence quickly covered in showstopping hues — your neighbors will turn green with envy. 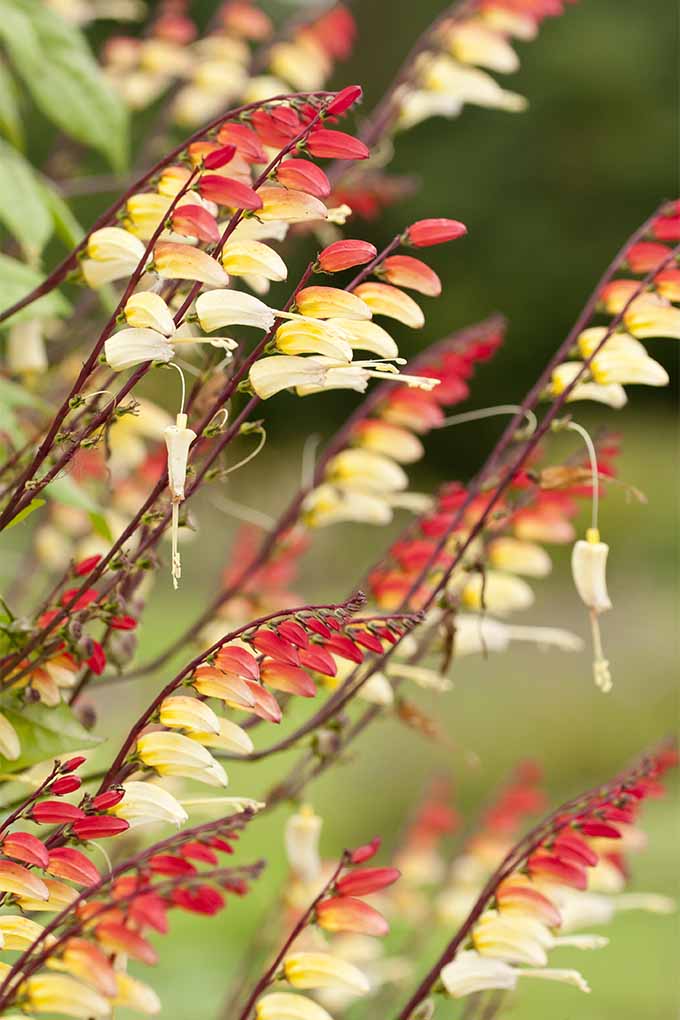 Some rich dirt, some water, and protection from a handful of pests – not too much to ask for an unusual carmine display well into autumn, is it?

Had you heard of mina lobata and do you consider it a beneficial or a weed? Share your thoughts in the comments section below.