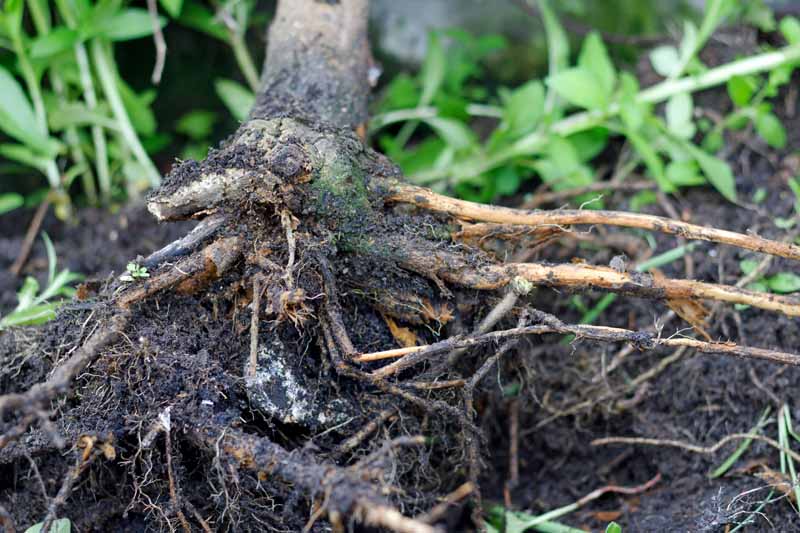 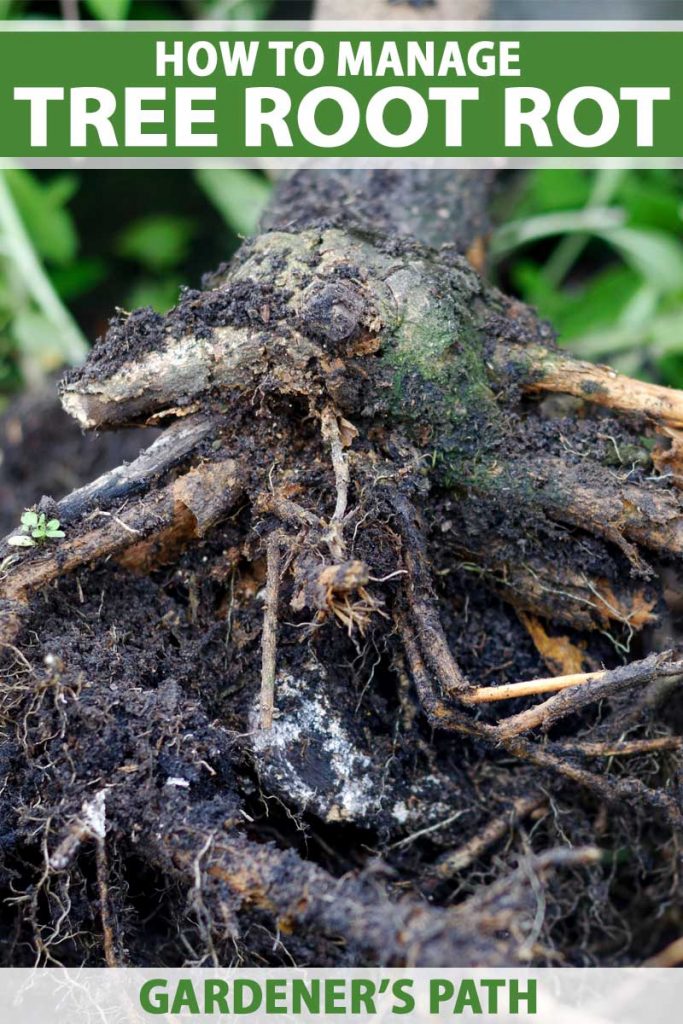 Many fruit, nut, and landscape trees can succumb to root rot caused by three types of fungi and a group of water molds (that used to be considered fungi); these include the fungi Armillaria, Phymatotrichum, and Xylaria and the water mold Phytophthora.

The trees show varying symptoms from these different diseases.

However, in all cases, there is a distressing tendency for the trees to be so weak that they lean or even break near the soil line.

There is no easy cure for any of these diseases. Trying to prevent them is your best bet. So read on to learn about these disturbing diseases, so you know what to look for.

Phytophthora species have such a strong preference for moist soils that they are known as water molds. The infamous species Phytophthora infestans caused the Irish potato famine in the late 1800s and the death of one million Irish.

Despite this term, they are now classed in a separate kingdom (the oomycetes) and are no longer considered fungi. However, they act like them!

A large number of these organisms cause root rot on a huge array of plants. However, in trees and shrubs, the species primarily responsible for root rot is Phytophthora cactorum.

These organisms have two types of spores. Oospores are thick-walled spores that can lurk in the soil for a long time and strike when conditions are moist. Other types of spores (zoospores) can swim, so they can travel across the soil in irrigation water or runoff. This enables them to quickly infect large numbers of trees.

If your tree or shrub is suffering from just Phytophthora root rot and not the other kinds of diseases it causes (collar and crown rot), there is some chance that it can recover. This can happen if conditions become unfavorable to the pathogen, such as becoming warmer and drier.

So many factors can cause decline that it can be difficult to determine what is causing these symptoms. If you think your tree might be under siege by Phytophthora, dig up the soil around the roots and look at the fine ones.

They might be orange or brown, and the primary roots might be shedding off the fine ones. In contrast, roots that are drowning due to wet soil will be brown overall and might smell decayed or fermented.

The use of overhead sprinklers can quickly spread Phytophthora onto trees. As an example of how dangerous irrigation canals can be, scientists isolated 749 specimens from irrigation canals in eastern Washington State. The way to check the water for these organisms is to suspend fruit in it and look for visible fruit rots.

2.Limit the Saturation of the Soil

Monitor your soil moisture and only irrigate when needed, since free water greatly increases the chances of the spread of this pathogen.

3. Plan Ahead if You Know Phytophthora is in Your Area

Try to plant in well-drained soil. For fruit and nut trees, you can also sometimes find rootstocks that are resistant to this pathogen.

However, resistance in rootstocks varies depending on the particular species of Phytophthora. So be sure and have your soil tested to determine the exact species before you choose a variety to plant.

Fortunately, microbes in the soil are waging constant war against each other, and you can harness that trend to your advantage.

Many types of soil bacteria and fungi can outcompete root rot organisms. For example, a classic biocontrol fungus that is widely used is Trichoderma.

You can encourage the growth of such organisms by adding a lot of organic matter to the soil. Grass clippings and compost are a good place to start.

Only certain compounds will work on Phytophthora, since they are not true fungi.

For the root zone, treat the entire area and not just near the base of the tree with the following compounds:

Trunk and root zone sprays that should not be combined with a copper-spray program include the following:

It is truly a giant fungus – its mycelia can spread for miles – giving it the designation of the largest organism in the world.

And to make things worse, the mycelia can survive for decades in dead root tissue and stumps. Stone fruits are the most susceptible, while apple trees are moderately susceptible.

How to Tell if Your Tree Has Armillaria Root Rot

Symptoms can range from the obviously horrendous, such as the sudden collapse of the tree in the middle of the summer, to more subtle ones. Your tree’s terminal shoot growth may be reduced, and the leaves may turn purple much earlier than they should.

You can diagnose Armillaria root rot by checking the base of your tree beneath the soil. The wood can show a white rot. If you remove the outer bark from the roots, they may look spongy and stringy (hence the name shoestring fungus).

If the tissue is actively decaying, the mycelia may be bioluminescent. Another giveaway can be the production of clusters of honey-colored or light-brown mushrooms at the base of the tree.

It May Be Too Late for Your Tree

Your best bet is to try and avoid this fungus in the first place. Try and remove all pieces of wood and roots from the soil before you plant your tree, since the fungus lives on in dead tissue.

Also try to protect your tree from stress. Adjust the pH of the soil and grow cover crops.

The amount of variation in this fungus can make it difficult to choose a resistant type of rootstock. A rootstock that is resistant in one test may be susceptible in another.

As if the previous types of root rots aren’t bad enough, there is another type of root rot that tends to affect older apple trees and hardwood trees, such as walnuts and elm. Two species of fungi, Xylaria mali and Xylaria polymorpha, cause this disease.

Black root rot also goes by the dramatic name of dead man’s fingers due to its production of structures that look like blackened fingers. These are found on decaying root surfaces.

Although trees of any age can come down with this infection, those that die are usually at least 10 years old.

Since the fungus can live on root fragments for up 15 years after you remove the infected tree, you will not be able to plant another apple tree on that site. However, if the site has deep soil and is well-drained, you can plant peach trees, since they are not susceptible.

Cotton root rot is a devastating disease that also goes by the names of Texas root rot or its scientific name of Phymatotrichum root rot.

The species name of this fungus, Phymatotrichum omnivorum, translates to “eats everything.”

That is an apt name for the fungus, since it can attack more than 2,300 species of broadleaf plants. Strangely, it can infect every kind of fruit tree except for pomegranates.

Fortunately for most fruit tree growers, this aggressive fungus is only found in soils that are heavy and alkaline – those that are common in the southwest – and soils that are below 5,000 feet.

Cotton root rot attacks when the soil is warm and moist – typical post-monsoon weather. The fungus spreads when an infected root touches an uninfected one. To complicate matters, Texas root rot can survive indefinitely on native vegetation like mesquite trees.

Also, the fungus can attack its hosts indiscriminately. For example, cotton root rot fungi from cotton can infect apple trees. This is a particular problem, since many housing tracts in the southwest are located on old cotton or alfalfa fields.

Even worse – the resting structures of the fungus survive for many years in soil more than 12 feet deep.

How to Tell if Your Tree has Cotton Root Rot

The only way to positively ID this infection is in a lab, but you can make a good guess based on the symptoms and the knowledge that the fungus is active in your area.

Your tree may wilt suddenly in the heat, and leaves (dead or dying) will remain attached to the tree even after it dies. The branches can wilt permanently as quickly as two weeks after you see the first signs of the disease.

Your tree is probably a goner, since there are no good controls for cotton root rot – even though the fungus has been studied since 1888.

You May be Able to Save Your Tree

If you notice the infection early enough, there is a chance to save your tree.

First, aggressively treat the soil. Add large quantities of ammonium sulfate and soil sulfur and then water deeply. The idea is to lower the soil pH when these fertilizers leach into the deep soil.

This serves two purposes. One is to inhibit the fungus, and the other is to encourage soil microbes that might be able to fight Phymatotrichum.

If this technique is successful, you need to repeat it every year. If not, the soil will revert back to favorable conditions for the fungus, which will return with a vengeance.

If you cannot save your tree, at least the soil will be ready for planting next year – hopefully with a resistant tree.

All Types of Root Rot Can be Fatal

Prevention is your best bet in all cases of root rot. Make sure you plant your apple tree in well-drained soil to protect against Phytophthora root rot. Minimizing the amount of moisture in the soil can help protect against this water mold.

Also treating your soil with biocontrol agents and using cultural practices that encourage the growth of these types of soil organisms can help in the battle against Phytophthora root rot.

If you know your area has a history of Armillaria root rot, you should prepare for planting by picking old tissue such as chunks of wood and dead roots out of the soil. The fungus can live in these types of tissue for years. Keeping your tree safe from stress can help to keep this fungus at bay.

While there are some fungicides that can limit Phytophthora infections, there isn’t much you can do if your tree is showing symptoms of Armillaria, black root rot, or cotton root rot.

Have you waged war against root rot in your fruit, nut, or landscape trees? If so, let us know how It went in the comments below, so that we can learn from your experience.

Looking for more tree disease information? Try some of our other guides:

One of Helga George’s greatest childhood joys was reading about rare and greenhouse plants that would not grow in Delaware. Now that she lives near Santa Barbara, California, she is delighted that many of these grow right outside! Fascinated by the childhood discovery that plants make chemicals to defend themselves, Helga embarked on further academic study and obtained two degrees, studying plant diseases as a plant pathology major. She holds a BS in agriculture from Cornell University, and an MS from the University of Massachusetts Amherst. Helga then returned to Cornell to obtain a PhD, studying one of the model systems of plant defense. She transitioned to full-time writing in 2009.
More Posts
Subscribe
23 Comments
Oldest
Newest Most Voted
Inline Feedbacks
View all comments 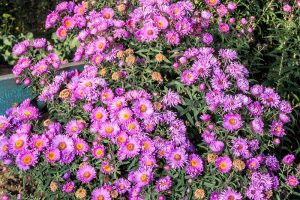 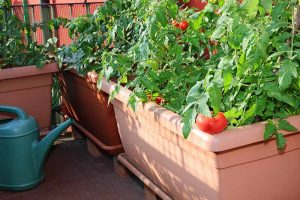