Southern blight is dreaded by home gardeners and commercial growers alike. The fungus that causes the blight is believed to be able to lie dormant in the soil for up to four years. 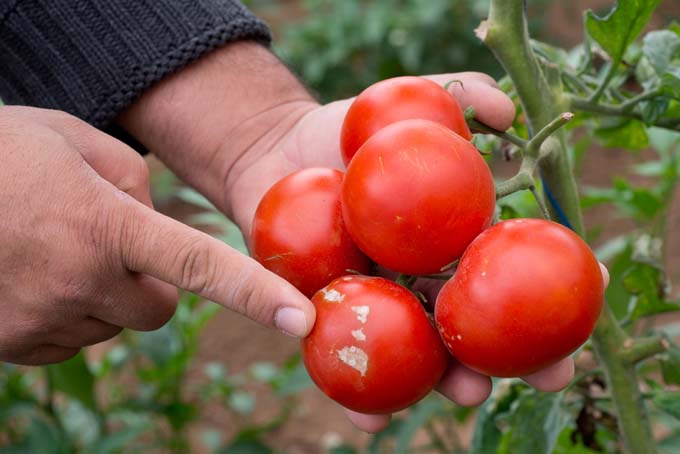 Once temperature and humidity conditions are right and and it finds a host plant on which to become established, it is extremely difficult to eradicate.

The southern blight fungus Sclerotium rolfsii, is hard to miss in healthy, green tomato plants. The leaves of the plants turn a sickly yellow color and begin wilting very quickly.

A lesion forms around the collar of the tomato stem, usually covered in a white mold. Within the patch of mold, round beads of a white or brown color resembling mustard seeds can be seen lying in the soil.

These beads, called sclerotia are the source of the fungus. Prevention is far preferred over trying to remove the blight once it has become established.

There are a number of measures a conscientious gardener can take to help ensure the health of a garden.

Seedlings purchased from any nursery that reuses potting soil or does not sterilize reused containers are often the overlooked source of an initial infestation.

The sclerotia are small enough that many gardeners do not even notice them mixed into the soil of the seedlings. When temperatures soar and humidity rises, the seedling will quickly die and the healthy sclerotia multiply in the soil.

Not cleaning gardening tools between plantings is similar to a surgeon operating on a patient without cleaning their scalpel or hands. It is the quickest way to infect a an entire garden.

A commonly overlooked source of sclerotia is in the dirt that gets caught in the treads of garden shoes. Walking through an infected nursery or home improvement store and then tramping through the garden is all that is needed to bring southern blight home.

Simply knocking the mud out of the treads before entering the garden should be sufficient to knock off any sclerotia hiding in the mud.

Many gardeners prefer planting tomatoes in large patio containers. While this is easier than digging in tough earth, the heat and moisture that is created in containers is the exact environment that southern blight thrives in.

A gardener’s odds of avoiding the blight are greater when tomatoes are planted in the ground with wide spaces between plants to allow sufficient air circulation.

This circulation helps to ensure the stems remain dry at the soil line where the fungus is known to attack..

Some gardeners employ crop rotation to help decrease the number of sclerotia in the soil. The idea is that over time, when the sclerotia cannot find a suitable host, they begin to die off.

This is a plausible method that could feasibly take two or three years to succeed. Corn is one of the few plants that is fairly resistant to the blight.

Sclerotia seem to attach themselves to decaying plant matter on the ground before infecting healthy plants. Removing plant debris and keeping a tidy garden can help prevent the sclerotia from getting a foothold.

That said, composting plant debris is a common and effective gardening practice that does not have to be abandoned all together. Gardeners should simply bury the compost deep in the ground, at least 8 inches, as the sclerotia do not seem to be able to attach to plants unless they are in the top layers of soil.

Tilling the same ground in later years may bring the buried sclerotia back to the surface though, so careful attention should be payed when composing is used.

The best time to look for signs of southern blight is a day or two following a heavy rain after a long period of hot, dry weather. The humidity spurs the fungus into action and when left untreated can destroy an entire crop in a matter of days.

Tomatoes are not the only plants susceptible to infection. Such popular backyard garden plants as beans, peas, watermelon and carrots can be host plants for the fungus.

In fact, southern blight is so hardy it can live on over 500 different plants. Gardeners are well advised to do all they can to avoid the blight rather than attempt to treat it.

For more information about other similar tomato diseases, then these other guides might of use: