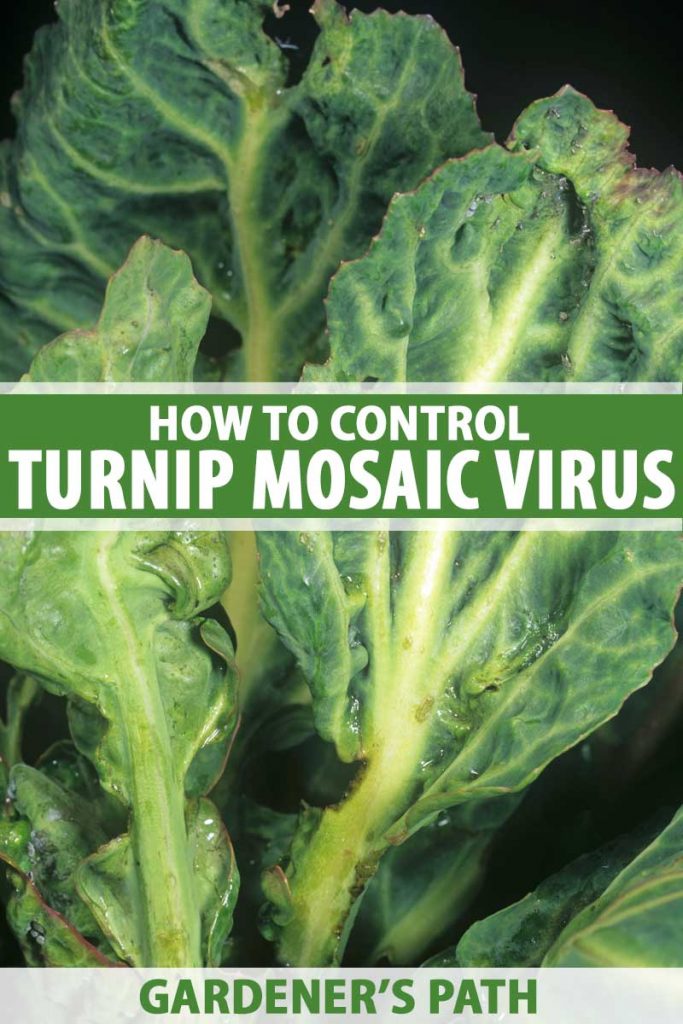 Turnip mosaic virus (TuMV) can be a severe disease on cabbages and other types of brassicas.

Many weeds are hosts to this virus.

This makes the situation worse for growers of cole crops, since aphids are a key source for this virus. The weeds can harbor both the aphids and the virus.

Since there is no cure for turnip mosaic virus, control is of paramount importance.

We at Gardener’s Path will describe the many facets of this virus and how to control it.

Turnip mosaic virus has a phenomenally wide host range – at least 318 species of plants in 43 families! And it infects plants all over the world.

Most cruciferous vegetables are susceptible to this virus. Among them, TuMV is the most severe on turnip, radish, mustard, and Chinese cabbage.

Hosts in other families include spinach, beets, lettuce, rhubarb, and tobacco.

While the yield losses for plants infected late in the season are usually low, TuMV can be devastating if it infects its hosts early in the season.

If it strikes in the seedbed or soon after transplanting, losses can be as high as 75%.

TuMV can infect the whole plant.

The symptoms of this disease vary depending on which host it infects and the stage of growth of the plants.

Symptoms on the young leaves include yellow round spots.

The tissue in these lesions dies as the infection progresses. Even worse, the lesions may join together and result in the complete loss of leaves.

The plants may be stunted and senesce prematurely.

Cabbage plants may develop dead spots on the outer leaves that occur throughout the whole plant.

Cabbages can also develop turnip mosaic virus during storage, although the disease is only visible on the internal leaves.

Common symptoms of infection in these plants include leaf distortion, stunting, and blisters.

In addition, turnips, radishes, and mustards may develop the classic symptoms of the disease – mosaics – variegated patterns of dark and light areas.

The symptoms often occur on one side of the plant and include the death of the veins and dead spots on the head leaves.

Unfortunately, a wide variety of aphids can transmit TuMV by feeding on a plant for less than a minute.

Winged aphids typically spread the infection over a thousand feet.

The aphids are more likely to travel downwind, so weather conditions have an enormous effect on the spread of this virus.

Aphids reproduce and spread more widely when it is warm and dry (68-82 F). Therefore, the aphids spread the virus more rapidly under these conditions.

Plants are less likely to become infected in cool, windy, and wet weather.

Once a crop has been infected, aphids can rapidly spread the disease between plants if they are not controlled.

In addition, the virus can be spread mechanically, such as using infected equipment – or even your hands.

There is no evidence of the transmission of turnip mosaic virus by seeds.

Cauliflower mosaic virus often infects cabbage and other cole crops when they are already infected with TuMV and enhances the severity of the infection.

In cool weather, this combination of diseases causes severe stunting and vein clearing.

Stunting and mottling are more common in warm weather.

Cauliflower mosaic virus is also spread mechanically and by aphids. However, unlike turnip mosaic virus, it only infects members of the brassica family.

Eliminating aphids and weeds are the major ways to control TuMV.

You should focus on the elimination of weeds in the brassica family like wild mustard and wild radish, although other types of weeds can also serve as hosts for TuMV.

If you are growing cabbage from seed, locate the bed away from fields that have weeds in them. (And do not plant in soil that previously harbored an infected crop.)

You may want to consider:

If you live in an area that frequently suffers from turnip mosaic virus, you should consider growing Danish cabbage varieties. Reports suggest that they have some resistance against this virus.

A Sporadic but Potentially Deadly Disease

Turnip mosaic virus can be a highly serious disease of cabbage, other cruciferous vegetables, and plants like tobacco.

And if this isn’t bad enough, the course of the disease is often complicated by cauliflower mosaic virus, which can simultaneously infect and greatly worsen the symptoms.

Aphids are the primary agents that spread both types of viruses, and both the pathogens and the aphids can live on weeds near your crop.

Have you suffered through an epidemic of turnip mosaic virus? If so, let us know how your plants fared in the comments.

Looking for more information about cabbage diseases? Check our our complete guide here.

We have grown some Chinese cabbage in our farm, recently I found some symptom on them which looks like Tumv, but I didn’t find aphids but flea beetles on them. Besides, the temperature here is so high, the high would be 90F, in the past few days, the high would be 100F. So I was wondering if it’s because of the heat stress or virus? Please check the pictures attached, and if it’s virus, could I compost them?

Hi Betty, I’m sorry that your plants are exhibiting such drastic symptoms. It’s hard to say for sure, but that does look like a viral infection, and the symptoms are consistent with those of turnip mosaic virus on Chinese cabbage. Flea beetles can spread viruses, so it’s possible that they were the source of the infection. We have an article on controlling flea beetles. Unfortunately, you can’t compost the plants. It would cause the virus to remain in your field. You should remove the plants from your field and destroy them. Hopefully if you control the flea beetles, that will… Read more »

hi Dr. George,
Thanks for your reply, beside the Chinese cabbage, will kale inflected by the Tumv? because some of my kale have dark and light mosaic on them, is that Tumv too? 😢

I’m sorry to say that the answer to your question is yes. Turnip mosaic virus infects a broad array of plants, including other members of the cole (crucifer) family.

You should also remove the infected kale plants. It really is an awful virus.