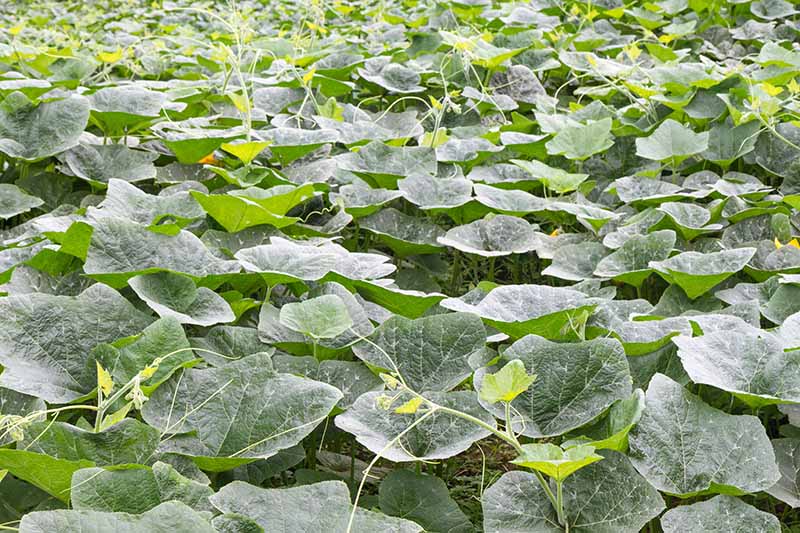 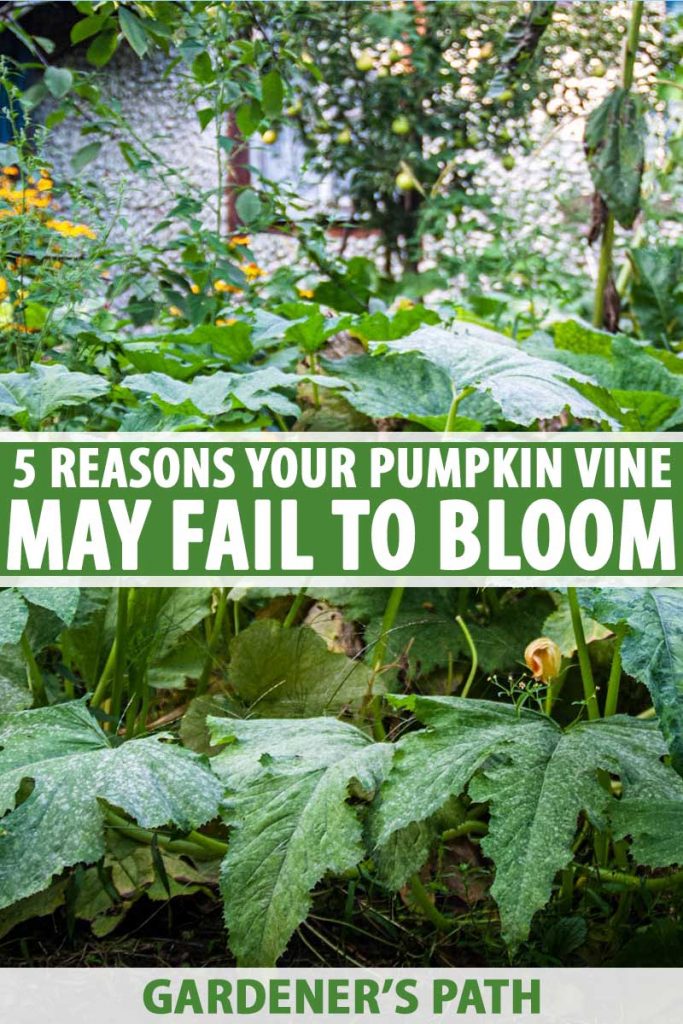 You planted your pumpkin seeds and felt that buzz of excitement when they germinated and poked through the earth.

They grew into robust vines with huge leaves, but right around the time when you expected flowers, none came.

What in the world?

Why Isn’t My Pumpkin Blooming?

From the time you sowed seeds in the ground, you should expect them to germinate within seven to 10 days. About eight weeks (or 50-55 days) after that, you should start seeing flowers.

This is about halfway through the pumpkin’s 100-120 day growing time, depending on the variety.

Here’s a tip: the first flowers you see are male. The biggest visible difference between male and female flowers is that males don’t contain an ovary like females do. The ovary looks like a tiny lump just behind the flower.

Male flowers, also called staminate flowers, contain pollen on the stamen. They begin to appear on the plant about a week or two before you’ll see any female, or pistillate flowers.

The pollen’s aroma in your garden begins to attract bees from the start, ensuring that there will be pollinators around once the female flowers bloom. 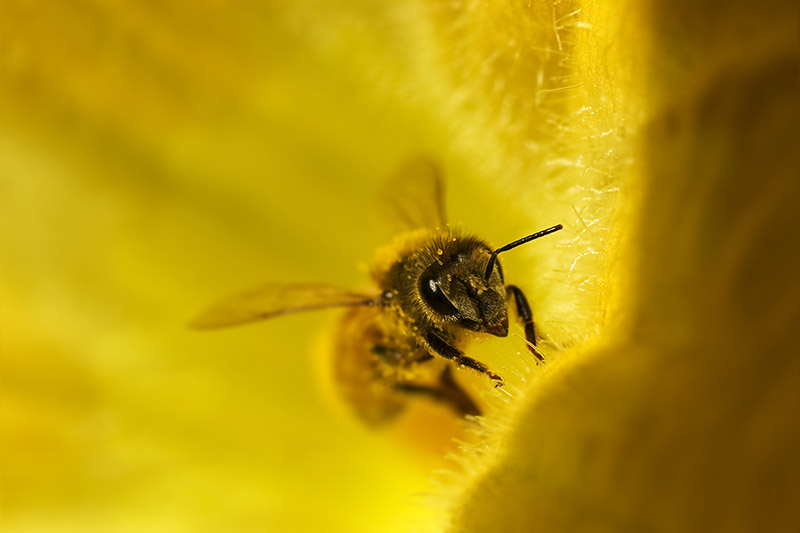 Here’s another secret of the pumpkin flower that I didn’t know until I started growing my own pumpkins: they only last for a day.

The flowers unfold at dawn. In the next several hours, they open more and more until they are graceful golden basins at their peak of beauty.

These hours are critical for pollination, whether you’re depending on bees or pollinating the plant yourself. 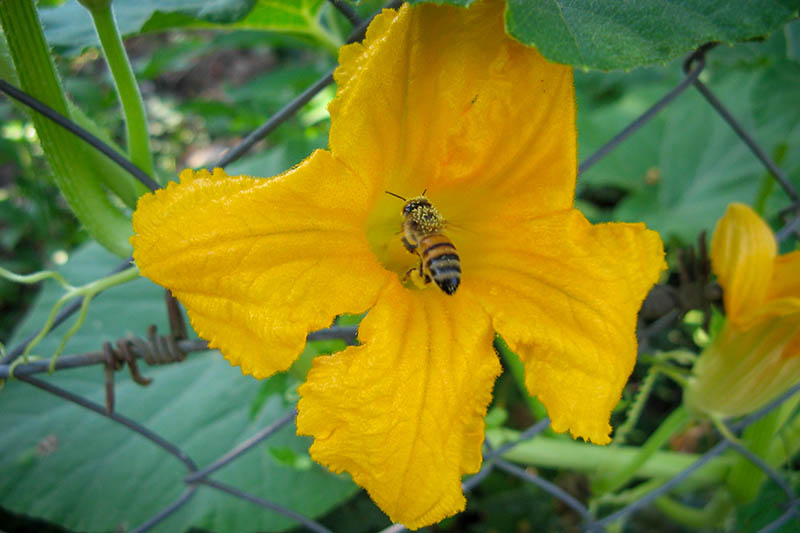 But that’s birds-and-bees talk for another article on pumpkin pollination, which is coming soon!

For now, just know that pumpkin flowers live short yet significant lives. By the end of their first day of life, they shrivel up.

The second thing to keep in mind is that they don’t appear until halfway through the plant’s entire life cycle.

So if you see vines and leaves but no flowers, consider two things:

If you aren’t seeing flowers even after more than 55 days, it’s possible that the soil your pumpkins are growing in has too much nitrogen, which contributes to lovely leaves but not to flower production.

Or maybe it has a workable amount of nitrogen but not enough phosphorus.

Phosphorus is responsible for helping plants set fruit, and it’s integral to the flowering process.

So if you planted your pumpkins in fertile soil several months ago but haven’t fed them anything since, it’s time to feed those hungry pumpkins!

To encourage flowering while still supporting leaf growth, choose a 5-10-10 NPK fertilizer so that your plants get more phosphorus and potassium than nitrogen.

If you’d rather not use a chemical fertilizer, work bone meal into the soil around your pumpkins, according to package instructions. 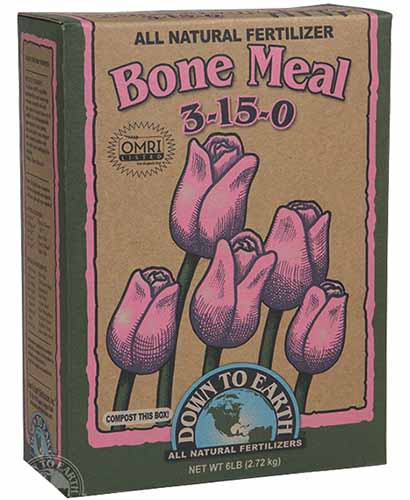 Down To Earth Bone Meal All Natural Fertilizer

This bone meal fertilizer, available from Arbico Organics, contains lots of phosphorus, a little bit of nitrogen, and no potassium — it’s 3-15-0 NPK, which should help your plants begin to blossom if phosphorus is what they’re lacking.

If you suspect that too much nitrogen is the problem, what to do? How do you lessen the amount of a chemical element in the soil?

Try planting corn next to your pumpkins next year, which eats up lots of nitrogen. 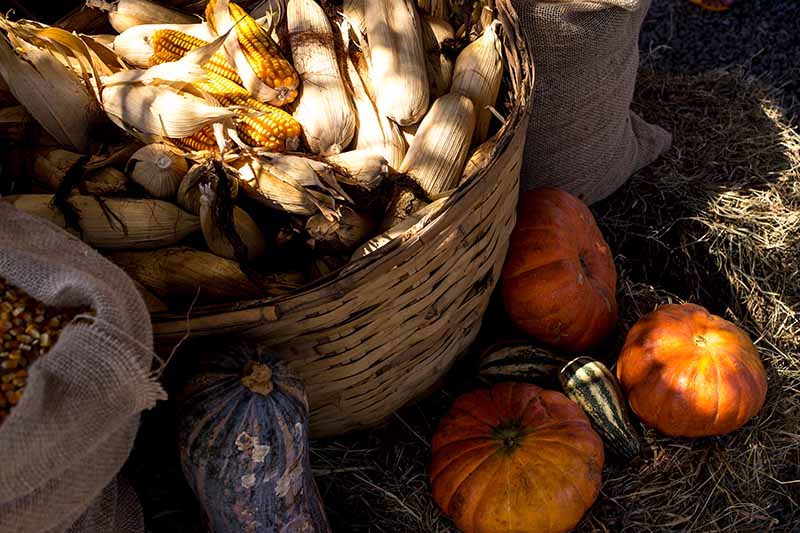 Remember that pumpkins need nitrogen too, so you’re not trying to eradicate or even greatly diminish the content.

The main thing is to let a few other plants benefit from it while adding phosphorus to help those plants bloom.

You can learn more about the best companion plants to grow with pumpkins in this guide.

Another reason you might not see blooms is lack of sunshine.

Like many plants, pumpkin vines will grow weak and leggy with a lack of light. And these plants love the sun – they need at least six to eight hours a day, preferably more. 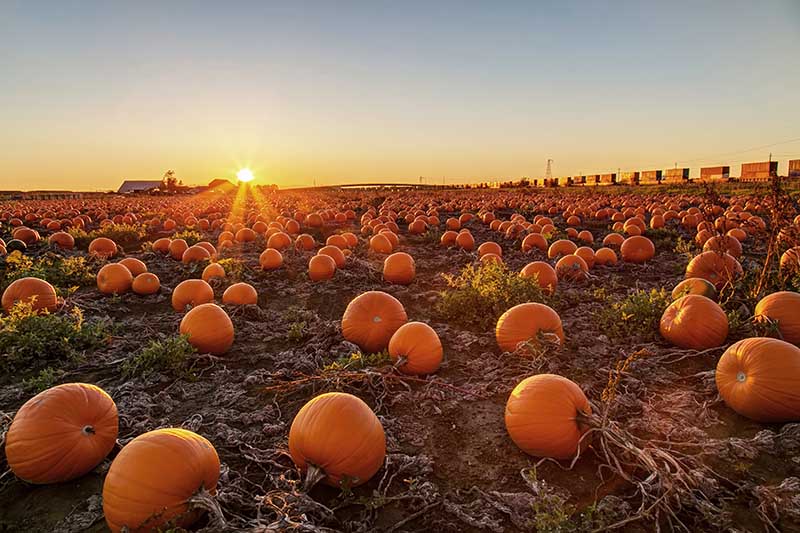 If they’re only getting four or five hours of sun and spend the rest of the day shrouded in shade, they may not produce blossoms when they’re supposed to.

So for one full day, keep track of how much sun your plant is getting. Don’t be afraid to carefully transplant it to a new, sunnier location if needed.

It’s possible that your plant is getting stressed under a big heatwave and dropping immature buds before they have a chance to open.

While pumpkins love sunshine, they don’t like to get too hot. 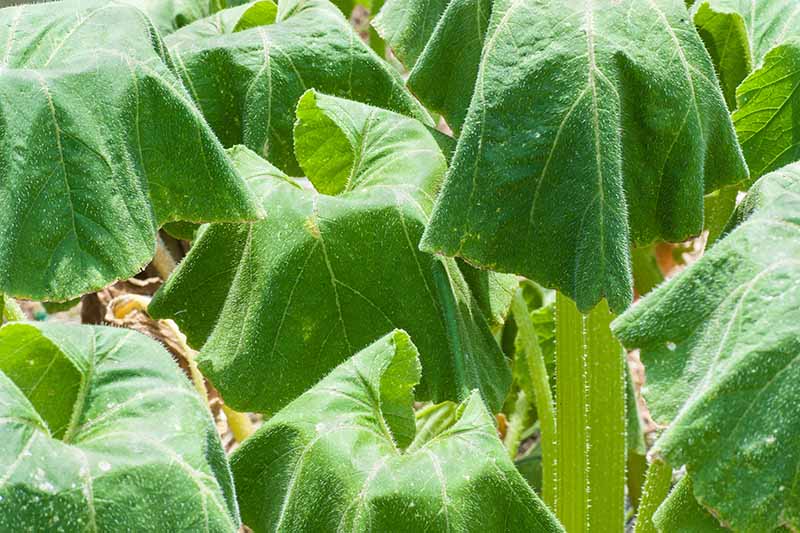 If daytime temperatures persistently rise above 90°F with little to no reprieve at night, your plant may be too stressed to produce flowers, which takes a lot of its energy and nutrients. Instead, it switches to a survival mode of sorts.

You might be skeptical that the sun could cause such damage to a sun-loving plant.

But take this example, which happened to me recently: I sowed several rhubarb plants from seed in containers this winter.

As soon as our extra-long Alaskan summer days hit, they thrived in their warm windowsill spot, growing thicker stalks and huge (for their age) leaves.

So I decided to put one outside for some hardening off. Since rhubarb loves sunshine, I figured a couple hours in fresh, relatively cool, 60-degree sunlight would do the plant some good.

I was wrong. It wilted.

It got too much sun, and the black container didn’t help.

So here’s what to do if pumpkin flowers are dropping and you suspect overheating is the culprit:

Just as we need help staying cool during the middle of any hot summer day, so do our plants.

5. There’s a Fungus Among Us

Sorry, I couldn’t help slipping that lovely rhyme in. But what I really mean is that there could be fungus among your pumpkins, and that could be the reason why the vines aren’t producing flowers.

Powdery mildew is one extremely common disease caused by fungi, and pumpkins are extra susceptible. 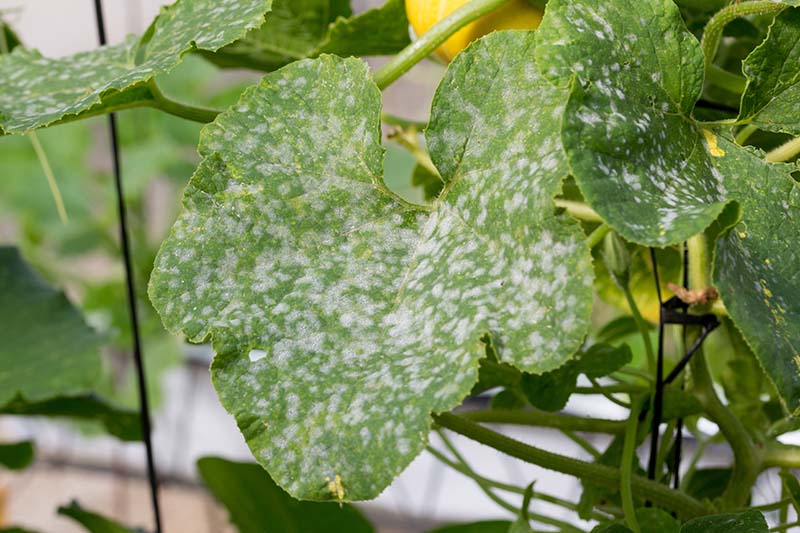 If you see powdery white stuff on your pumpkin vines or leaves, take action quickly. Remove the affected leaves and grab an organic fungicide to treat the plant.

Some fungicides are preventative, others are intended to treat an existing infestation, and some do both. So pay attention to what you’re spraying your plants with.

Spraying an existing fungal outbreak with preventative fungicide won’t do much, while adding a curative fungicide to non-infected plants can be a waste of time and money.

And if you live in an extra wet, rainy area, it’s worth spraying your plants with preventative fungicide early on in their growth. 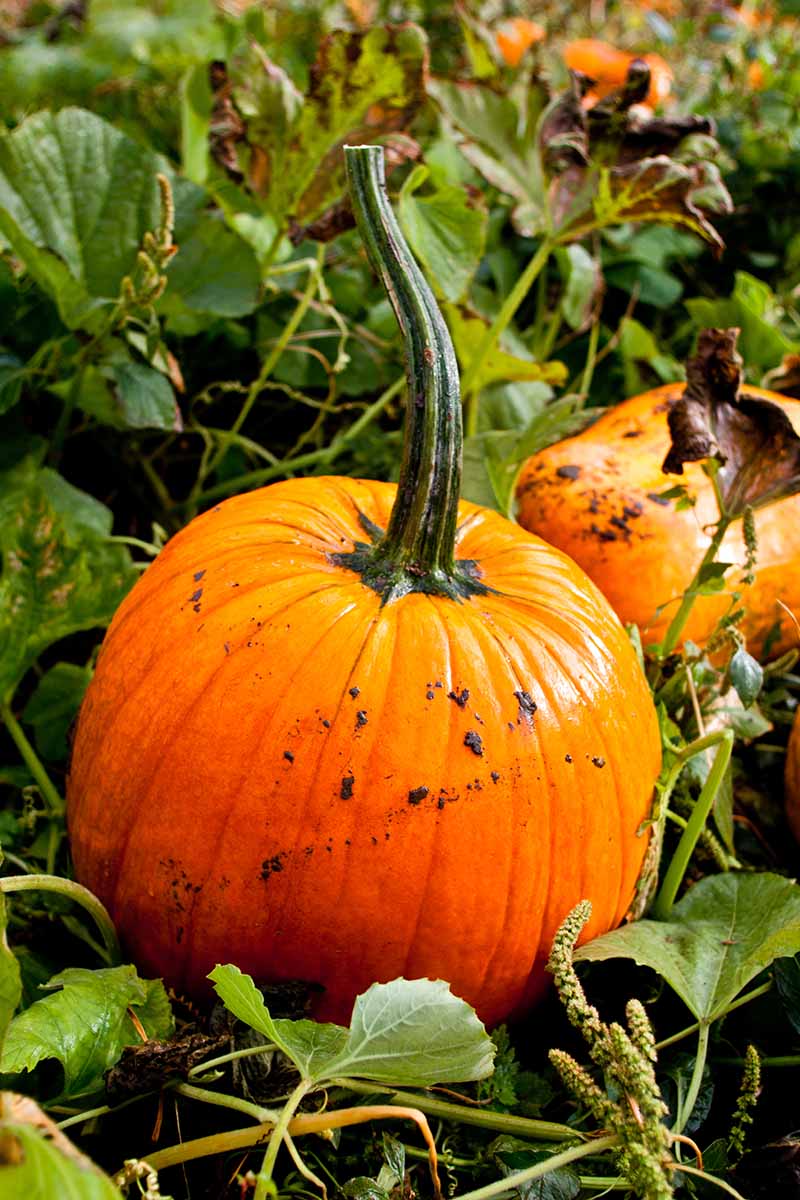 Also, when you’re removing leaves, be sure to wash your hands between plants and even between infected and not-yet-infected leaves on the same plant.

The last thing you want to do is pluck a mildewed leaf off one vine, only to use that same hand to touch a healthy nearby plant or leaf, thus spreading the spores.

Any fungal infection could affect blossoming if the disease lowers the overall health of the vines and leaves, delaying blooming or even killing the plant.

But with quick and early treatment, you should be able to avoid this.

Of course, the best way to prevent fungal infections is to avoid overhead watering and make sure there’s adequate airflow around your plant.

This, combined with getting into the habit of checking your pumpkin leaves and vines daily for signs of disease, will help ensure that your plants are healthy enough to blossom and set fruit.

May They Bloom and Grow Forever

Well, maybe not forever. But now that you know the five main culprits that may cause a lack of blossoms, you’re ready to get those plants healthy and blooming.

And you know what that means – baby pumpkins coming soon to a plant near you. Oh, the excitement!

In the meantime, keep an eagle eye out for those pumpkins, like my three-year-old does. He adores checking on them. He even uses binoculars to get an extra-close look.

Have you ever dealt with pumpkins that didn’t want to bloom? Let us know in the comments!

And remember to check out our other articles on growing pumpkins in your garden: 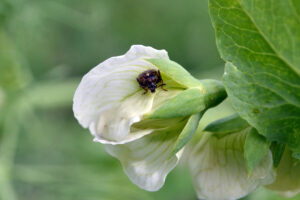 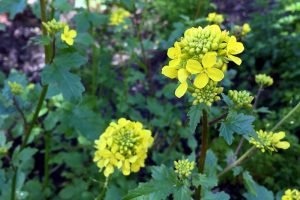 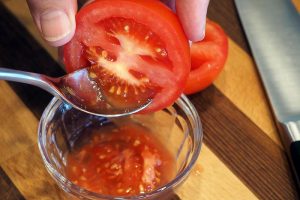 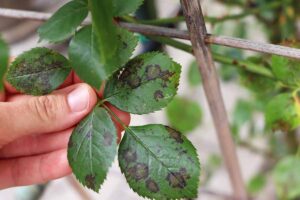 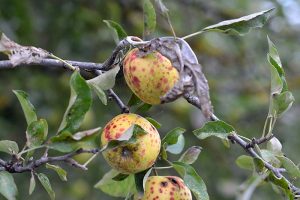