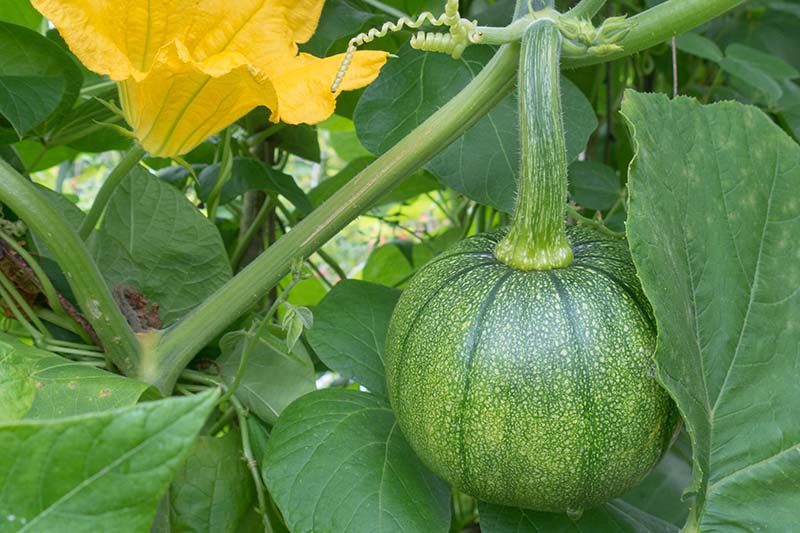 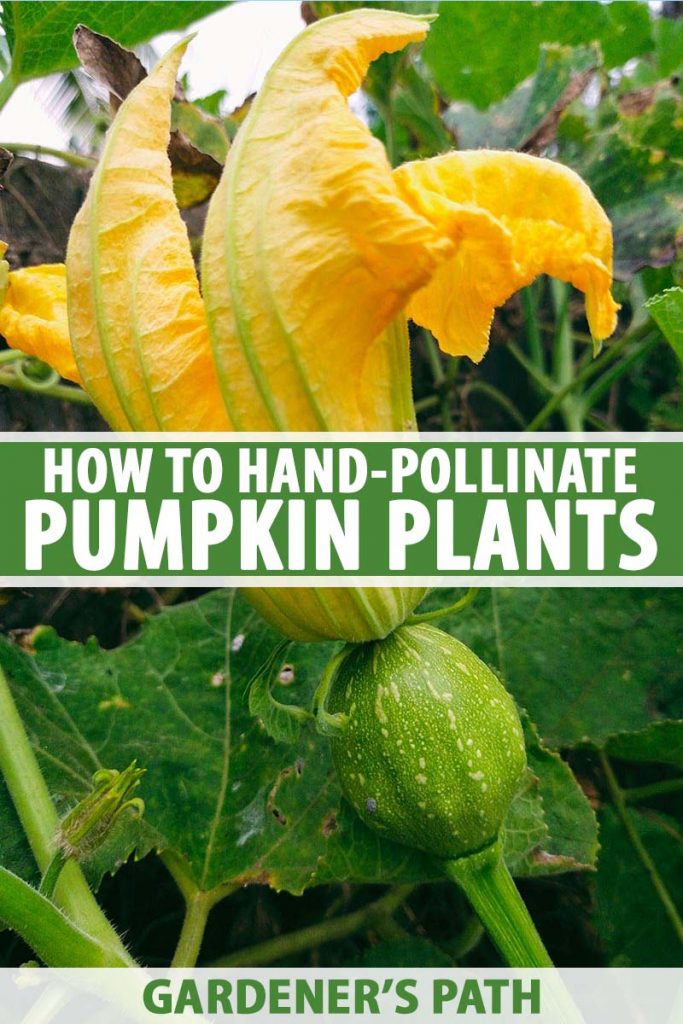 To me, pumpkins are the paragon of autumn, my favorite season. So this last winter, I decided to grow a few varieties indoors in early spring for a summer transplant into the garden.

But the gourds began to flower while they were still inside.

Frantic, I researched pumpkin pollination. Sure enough, they need bees in order to be pollinated.

Alas, there were no bees to be found in my house in early May.

What comes next is a story of determined lovers, along with tips for what to do if your flowers aren’t as romantic as mine.

Ready to unlock the secrets of Cucurbit pollination? (Because yes, everything you’ll learn here applies to zucchini, squash, gourds, cantaloupes, and more.)

How Do Pumpkins Pollinate?

Before we get started on how to hand-pollinate your pumpkins, let’s dive into the nitty-gritty details of pollination for this gorgeous member of the Cucurbit family.

About 50-55 days after your seedlings germinate, the first yellow, open-throated flowers will appear.

These are the male, or staminate, blooms. They usually start blooming a week or two before the female, or pistillate, flowers. And unlike the females, they contain no visible teeny tiny baby – aka the ovary – at the base of the stem.

That’s right  – pumpkins and other Cucurbits are monoecious, meaning they have separate male and female flowers on the same plant.

In order for the baby ovary to grow into a mature fruit, pollen from the male flower’s stamen must be transferred to every portion of the female’s pistil.

How does that typically happen? You guessed it. When your plants are growing outdoors, honeybees, bumblebees, and squash bees usually do that work for you. 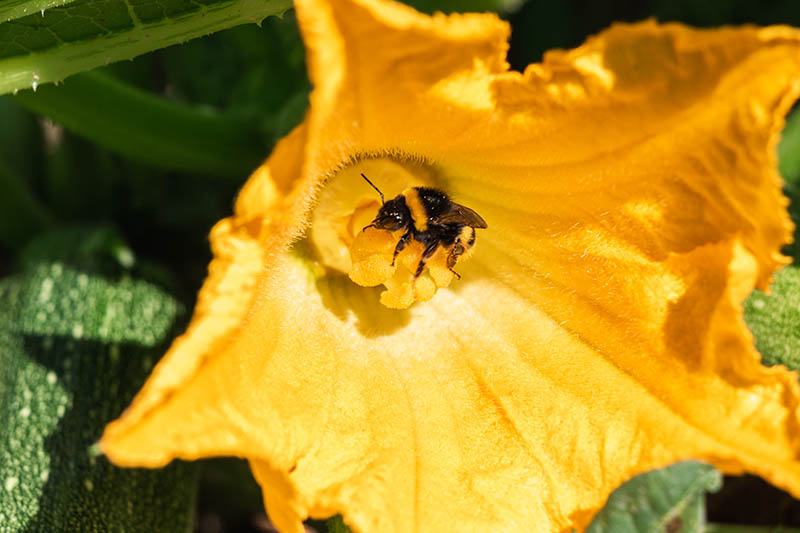 But if you’re like me and you’re growing your gourds indoors for a while, you’ll have to do it yourself if they bloom. We’ll talk more about that in a moment.

Here’s a tip: don’t be like me and freak out when both the male and female flowers wilt and die by the end of the day.

That’s what they’re supposed to do. The ideal pollination time is during those golden hours when both types of flowers are open.

While one plant can definitely have both male and female flowers blooming at the same time, you’re more likely to get more “pollination windows” if you plant several gourds of the same variety. 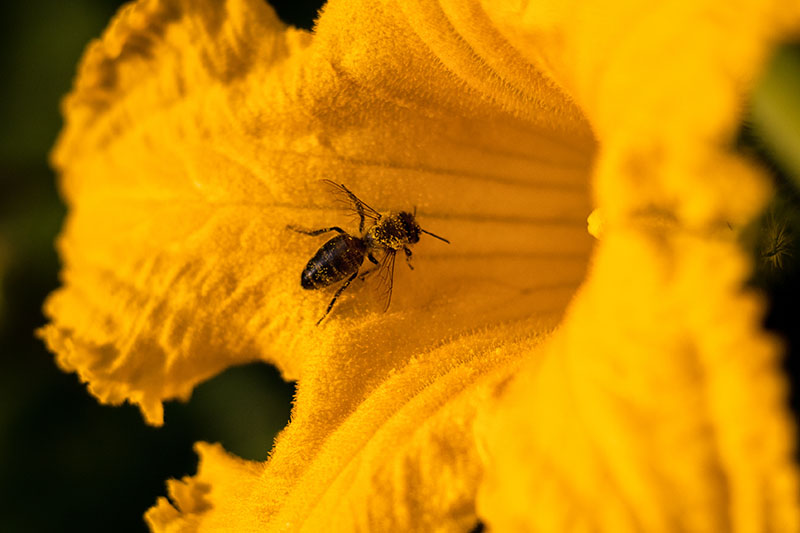 This is because there will be more male flowers open at a given time to pollinate those females.

But say you don’t have many bees around in your outdoor garden, you’re growing gourds in a greenhouse or a similar indoor space where bees don’t have access, or it rains on the day when your male and female flowers open and the bees aren’t out and active?

This is where hand pollination comes in.

Or romantic intentions between blooms, if you want to place your bets on it…

That’s what happened to my ‘Jack be Little’ plant.

A Tale of Determined Love

One morning, before I had researched how pumpkins are pollinated, I awoke to find a flower with a tiny baby pumpkin at the base (aka the female flower) and another flower from farther down the vine fused together in what appeared to be a sort of embrace.

A couple days later, the blooms fell off but the baby remained.

And it kept growing.

After conducting my research into pollination, I was fascinated to discover that the two blooms had somehow found each other, with the male pollinating the female directly since there weren’t any bees inside and I, the tardy gardener, hadn’t solidified my pumpkin pollination knowledge yet.

Isn’t that too cool?

If you don’t want to depend on this unlikely but seemingly amorous method, here’s what to do.

How to Hand Pollinate Pumpkin Plants

The easiest way to do this is to first identify a male flower. The stamen should be covered with fuzzy pollen.

Next, peel back the petals until the stamen is exposed. Take the stamen and bring it over to a female flower’s pistil, which looks like this: 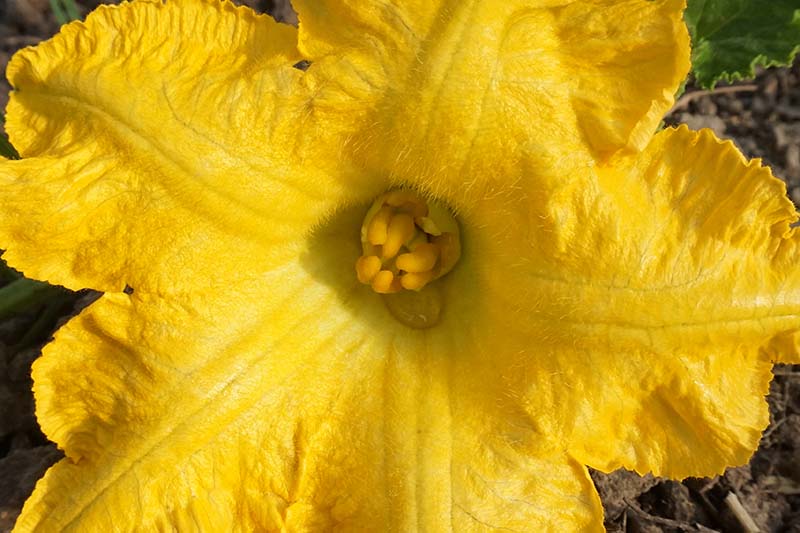 Gently rub the male’s stamen over each segment of the female’s pistil until there’s plenty of sticky pollen on every single segment.

You can also take a paint brush or cotton swab and use it to gather yellow pollen from the male flower.

Then, carefully brush the pollen all over the female’s pistil. 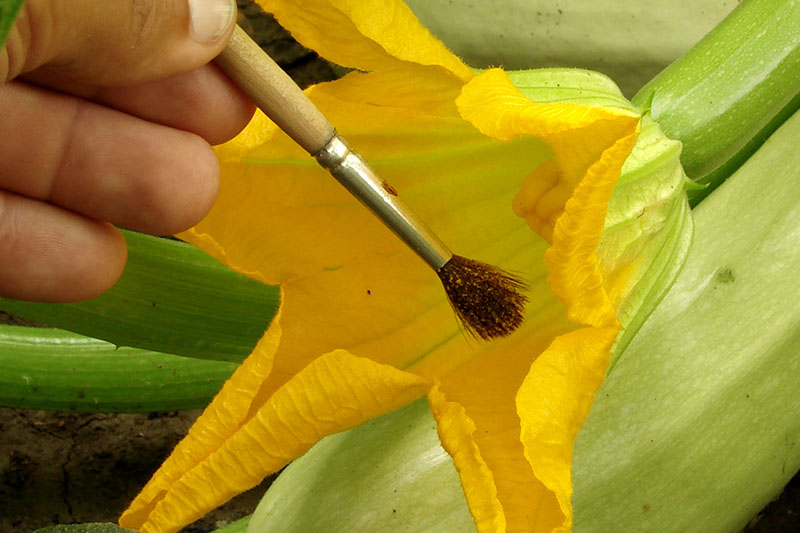 Once you’re done, gently seal the female flower by pressing the petals together, covering the pistil. This will keep any nearby bugs from landing there and transferring pollen away from the flower.

That’s all there is to it.

The female flower petals will dry up and fall off, and the tiny ovary will grow into a fat pumpkin if it’s been pollinated sufficiently.

An Easy-Peasy Path to Beautiful and Delicious Harvests

It’s shocking how easy it is to pollinate pumpkins on your own. Now that you know, you can be smarter than I was, and watch out for those male and female flowers.

Now even those of us who have to grow our gourds somewhere artificially warm and bugless can enjoy the promise of pollination.

Have you ever hand-pollinated Cucurbits? Let us know in the comments below!

And don’t forget to check out these guides for more information on growing pumpkins in your garden:

Laura Melchor grew up helping her mom in the garden in Montana, and as an adult she’s brought her cold-weather gardening skills with her to her home in Alaska. She’s especially proud of the flowerbeds she and her three-year-old son built with rocks dug up from their little Alaska homestead. As a freelance writer, she contributes to several websites and blogs across the web. Laura also writes novels and holds an MFA in writing from Vermont College of Fine Arts.