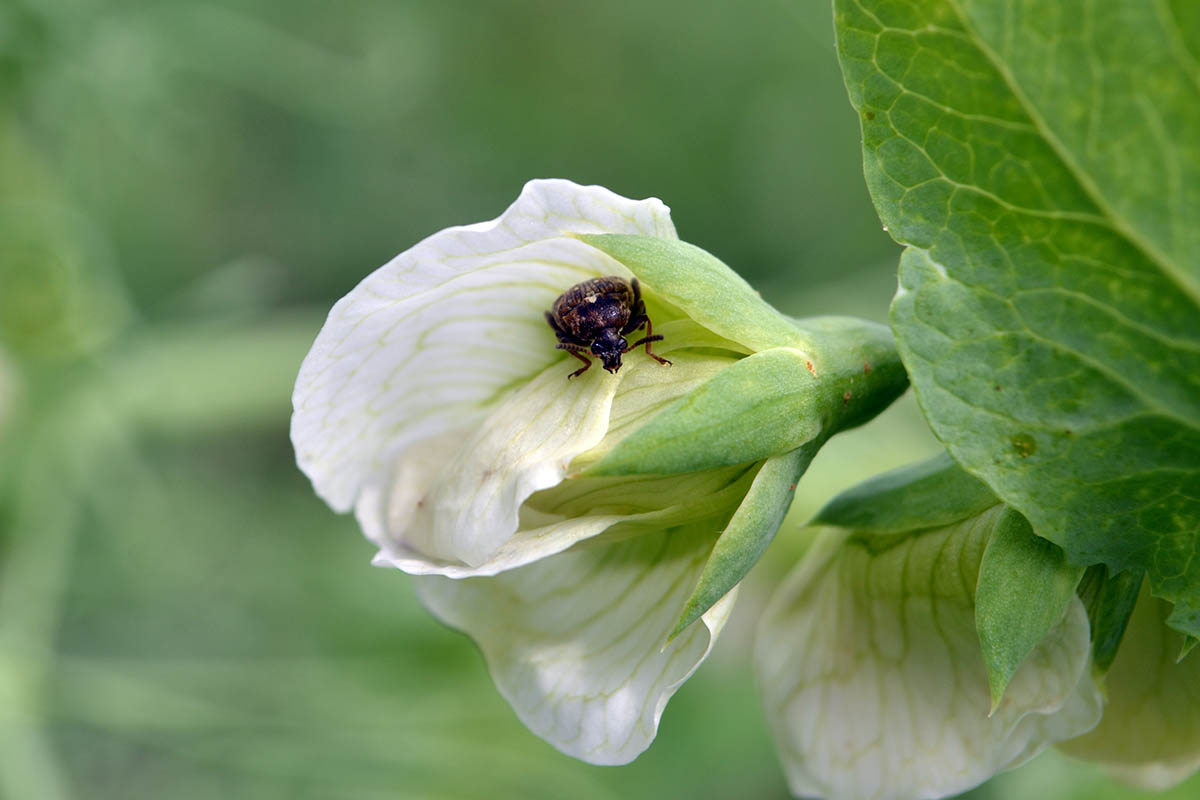 They may not be actual weevils, but there is no question that these pests are sneaky. Hiding inside the pea seeds within the pods, they can ruin an otherwise beautiful, bountiful crop.

The worst part: they’ll make themselves known after all the hard work of growing and harvesting is done, often emerging from the seeds in storage.

What can be done about them?

Everything you need to know about these little insects is laid out for you below!

What Are Pea Weevils?

Pea weevils are not true weevils, and they in fact belong to the leaf beetle family, Chrysomelidae. They lack the snout that distinguishes true weevils. Other common names for these pests include pea seed beetle, or pea beetle.

Known as significant pests since the mid-1700s, they were accidentally introduced to North America from Europe in the 1600s via infested seed.

Now they are found everywhere that peas are cultivated, including all over the United States and southern Canada, and in most temperate regions of Asia, Europe, north Africa, and Australia.

They are monophagous, feeding exclusively on Pisum sativum or field peas, attacking plants both in gardens and in large commercial fields.

Bruchus pisorum adults are five to seven millimeters long, and two and a half millimeters wide. The females are slightly bigger than the males.

With a globular shape, the beetles have long legs and a short head. Their antennae are less than a third of the length of their bodies.

Soft gray or brown to black in color, they have irregular white flecks over their elytra, or wing covers. The elytra are short, with the last abdominal segment exposed. This segment sports a white pattern that is described by some as being airplane-shaped.

The larvae are legless, creamy white, C-shaped grubs with a brown head. They grow up to five millimeters long.

B. pisorum eggs are bright yellow, oval-shaped, and one and a half millimeters long.

Though their common names are very similar, these are not the same species as pea leaf weevils (Sitona lineatus), which feed on the rood nodules underground as well as the leaves and growing tips of annual legumes including field peas, lentils, and fava beans.

The adults of this species are slender and grayish-brown, with three distinct, light-colored longitudinal stripes running down the thorax.

B. pisorum produce one generation per year, taking 50 to 80 days to complete the cycle from oviposition to adult emergence.

Adults overwinter beside fields and emerge once temperatures reach 68°F, often coinciding with the time when peas begin to bloom. They will travel up to five kilometers to find the flowers, attracted by their scent.

Adults will invade the crop for three to four weeks. Both males and females feed on flowers, leaves, or pods, but initially they are especially drawn to pollen.

Females’ ovaries mature after consuming significant quantities of pollen, and mating will occur after this. Volatile phytochemicals released by the plant cue the start of egg-laying.

Females lay their eggs on the outside of pods. The eggs hatch in one to three weeks, depending on the conditions, and the larvae burrow into the pod, leaving distinctive, tiny, dot-like entrances.

Larvae grow in the developing seeds inside the pods, or inside stored or germinating seeds, going through four larval stages (instars) over the course of four to eight weeks.

Feeding on the peas from within, only one larva can survive per developing seed. Optimal temperatures for larvae and pupae development range from 89 to 105°F.

After pupating for about two weeks inside the seeds, the adults that emerge chew an obvious, two-and-a-half-millimeter round exit hole.

This can happen before harvest, allowing the adults to disperse to overwintering sites, or about a month post-harvest, surprising the farmer or gardener. Large populations can decimate a stored crop. Affected seed is not fit for human consumption.

The life cycle can’t continue in storage, however, as the adults need pollen to reproduce, and developing pods for the larvae to burrow into.

Since the adults often don’t emerge from the seed, and damage isn’t obvious until the peas are in storage, many think of B. pisorum as a storage pest. However, as is obvious from their biology and life cycle, the problem starts much earlier.

Farmers often use sweep nets to monitor for adults every three to four days once flowering begins. If you have a smaller crop, check the flowers for adults, as these pests are very attracted to their scent.

Cultural control is very effective for these pests, making up for the lack of biological controls and limited chemical options.

Sown seed needs to be free of insects, and garden hygiene is essential. Be sure to purchase seed from a reputable purveyor.

Field sanitation practices – such as destroying crop residues, preventing pod shattering at harvest by picking peas before they are dry, and eliminating volunteer pea plants – can go a long way toward protecting future crops.

If you leave spots available for the adults to overwinter, such as in debris left on the edges of the field or garden, count on facing repeat infestations year after year.

Crop rotation is effective if good sanitation is also employed, especially in small gardens. Trap cropping is still being studied and an effective trap crop is yet to be found.

Early harvest, when the insects are still immature and damage is minimal, along with harvesting before adults emerge and move to hibernation areas, can decrease pest abundance the following year.

Storing harvested peas at 1°F overnight can kill B. pisorum in any stage of their life cycle that may be hiding inside, and chilling shouldn’t affect germination rates in saved seed. This is a great idea if you plan to plant your own seeds.

Triaspis thoracicus is a tiny wasp that parasitizes B. pisorum larvae and it is used in Australia and Canada for biocontrol.

Using sheep to graze out crop residues is more practical for many farmers and smallholders. The animals will eat shattered pods, volunteer pea plants, and any other infested plant parts.

Unfortunately, there are no organic pesticides available today that are effective against these pests.

Luckily, the other methods described above provide good control if multiple strategies are combined.

Pesticides are generally unnecessary for use in home gardens.

Once the larvae have hatched and burrowed into the pods, they are protected from most insecticides, so timing is key if you are using sprays. Aim to spray for the adults after most have invaded but before the eggs are laid.

Commercial growers will often wait until just after the first flowers wither to spray.

Border sprays are also effective, catching the overwintering adults right before they head into the field.

Malathion, carbaryl, pyrethroids, and organophosphates may be useful against this pest. However, keep in mind that many pesticides are tough on beneficial insects and pollinators.

The Weevil That Isn’t

It can be intimidating to know your peas might be harboring a hidden pest at this very moment.

The good news is cultural controls are very effective, so start early and use a variety of methods to hit this beetle where – and when – it counts.

Have you ever noticed holes in your peas that weren’t there before? Tell us about it in the comments below!

And for more information about growing peas in your garden, check out these guides next:

Sylvia Dekker is a nature-inspired creative with a bachelor’s degree in agriculture, a history of Canadian province-hopping, and a life filled with brown thumbs, bee stings, and tan lines. When Sylvia travels, on mountain or steppe, she harvests knowledge, experiences, and honey, goes starry-eyed over each tiny plant, and writes about it all.
More Posts 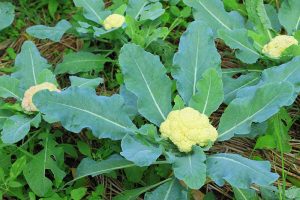 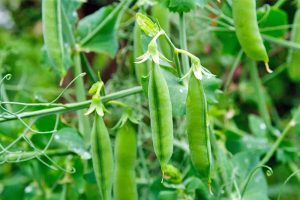 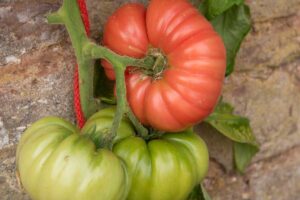 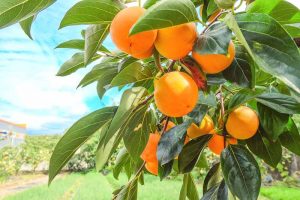 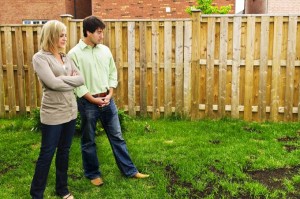