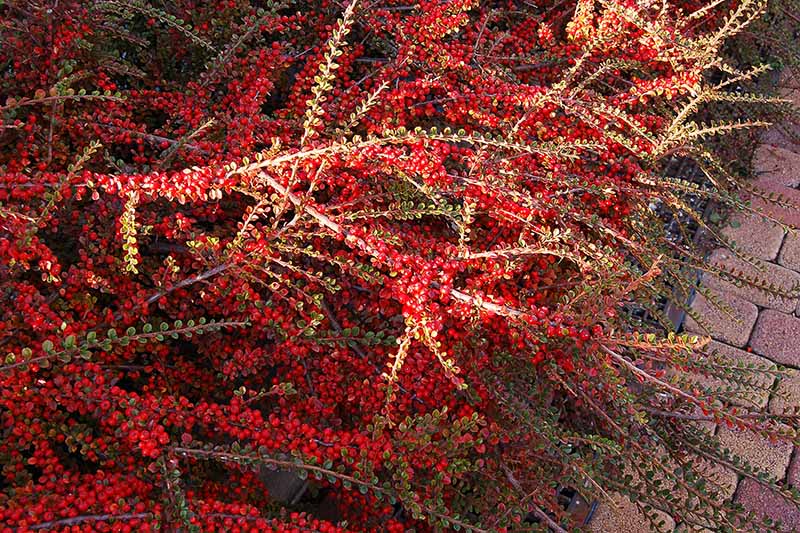 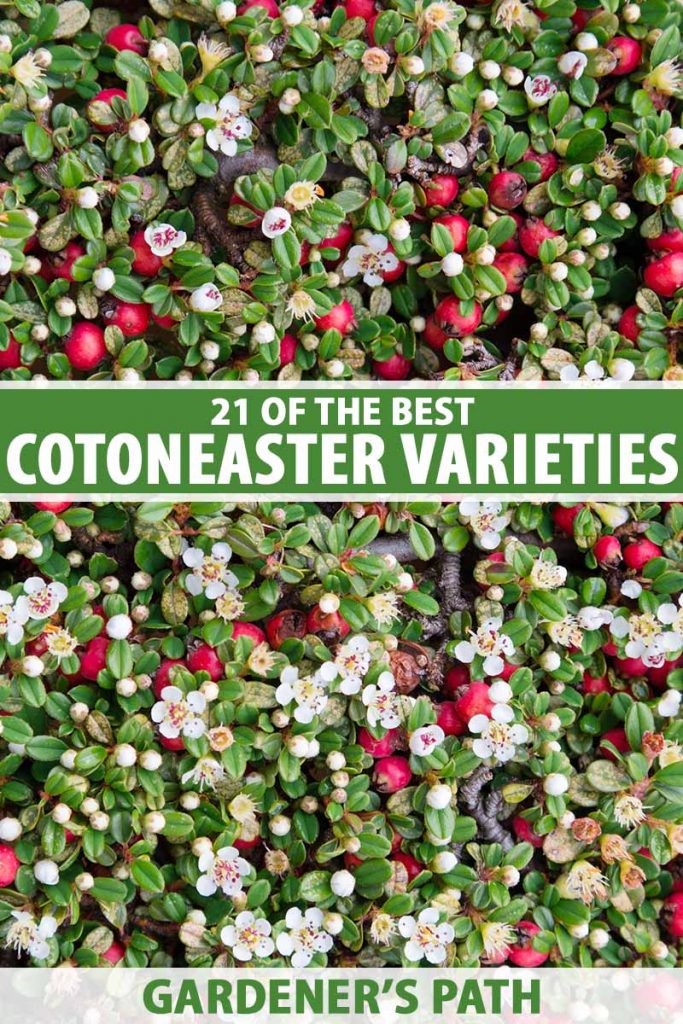 Creeping and prostrate types are low-growing and are typically used as ground covers.

They also make striking additions spilling over the side of containers and retaining walls, creeping in rockeries, trimmed into fanciful topiary, stabilizing banks and slopes, and in xeriscapes.

The upright species typically have graceful, arching branches and create handsome displays when either tightly trimmed into formal hedges or left freeform as informal hedges.

Easily trained, upright types are also popular espaliered to fences and walls, trellised as privacy screens, standardized into small trees, and grown in single or multiple rows as farm windbreaks.

The flowers and berries attract bees and birds, but deer and rabbits stay away from these shrubs. They’re also salt resistant, making them a good choice for seaside gardens.

And once they are established, these plants are drought resistant and self-root readily, forming large, attractive colonies.

These shrubs may be evergreen or deciduous, depending on the species, and some are semi-evergreen. Semi-evergreen types will remain evergreen in warmer locations, and drop their leaves in cooler growing zones.

In our guide to growing cotoneaster, you’ll learn that they’re very easy to care for – a little spring pruning for shape if needed, and that’s about it for maintenance!

Then join us now for a look at 21 of the best cotoneaster varieties for ground covers, hedges, and more!

21 of the Best Cotoneaster Varieties for Your Garden

It should be noted that some species have escaped garden cultivation and are considered invasive in certain coastal areas in North America such as British Columbia, California, the Great Lakes states, Hawaii, and the Pacific Northwest, as well as in parts of Australia, New Zealand, and western Europe.

You may wish to check with your local extension office or the USDA invasive plants list before planting, to ensure that your chosen variety is not considered invasive in your area.

For growing as ground covers, the following prostrate species are popular.

Bearberry, C. dammeri, has low, trailing stems that grow up to 10 feet long, with a height that ranges from six to 24 inches. 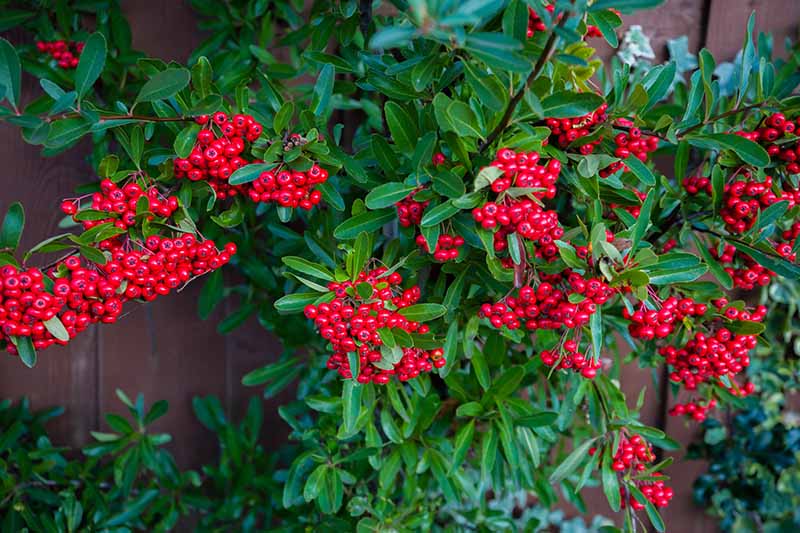 An evergreen, the ovate leaves are deep green and glossy, turning reddish-purple in the fall. The stems are covered with a showy display of single white flowers in late spring followed by bright red berries through fall and winter.

Bearberry cotoneaster is a versatile shrub that can be used for borders, ground covers, atop retaining walls, or for soil stabilization. Hardy in Zones 5-9, plants are semi-evergreen in colder areas. 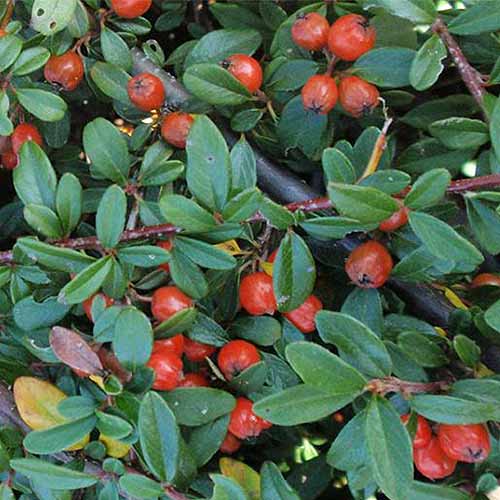 You can find plants in #1 containers available at Nature Hills Nursery. 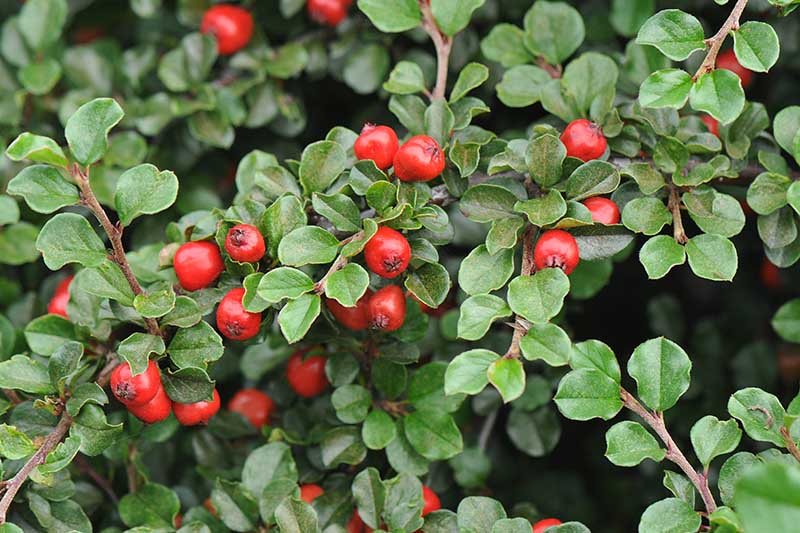 Pink blooms appear in spring, then a profusion of bright red berries in fall, with round, glossy leaves that turn red to burgundy in autumn.

This deciduous species is a beautiful choice for a low barrier, ground cover, rockeries, or for slope and bank stabilization. Plants are suitable for cultivation in Zones 4-7. 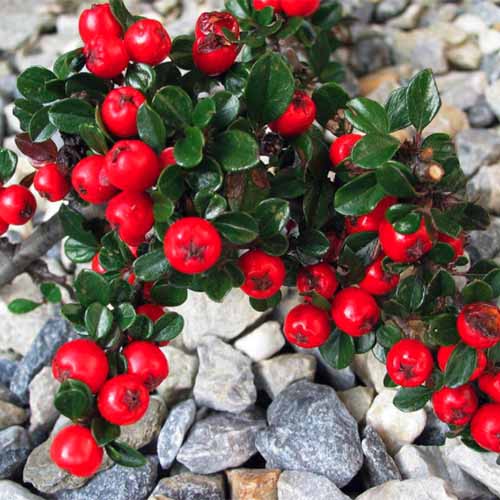 You can find plants in one-gallon containers available at Home Depot.

C. adpressus, aka creeping cotoneaster, are compact deciduous plants with trailing stems that reach up to six feet long with a height of only 12 inches. 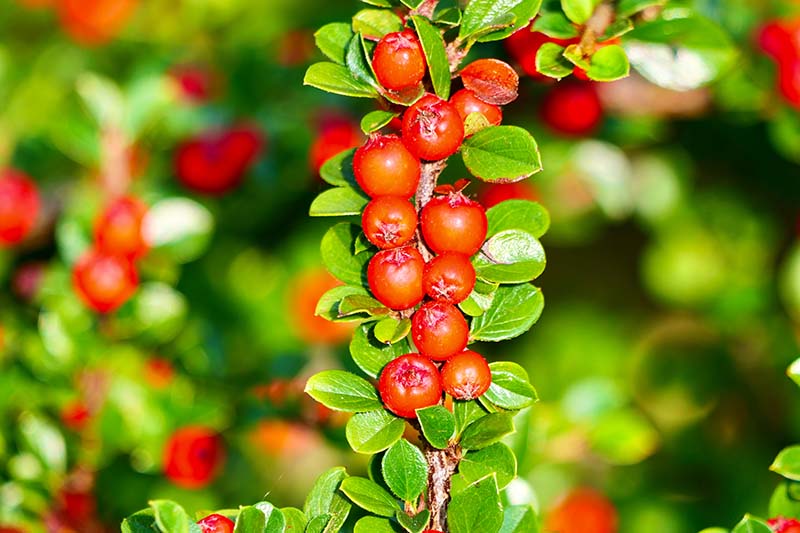 Pinky red flowers are followed by dark red berries and deep burgundy fall colors. This species is hardy in Zones 4-7 and is highly drought tolerant once established.

Most effective when used for borders, ground covers, and in rockeries. It’s also a popular choice for topiary and bonsai. 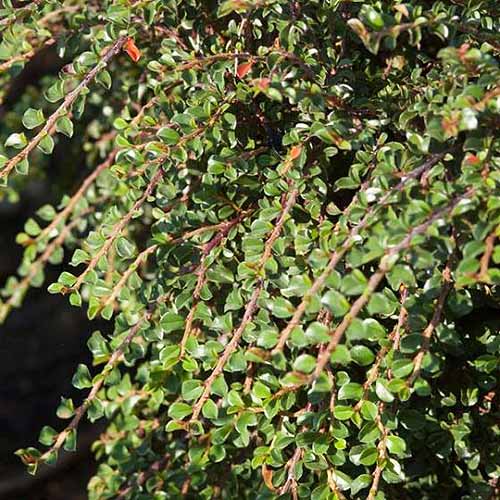 ‘Tom Thumb’ is a dense, dwarf cultivar with tiny leaves and smaller-than-average fruit.

Plants are available in one-gallon containers at Nature Hills Nursery.

Compact with a low-growing form, Kashmir cotoneaster, C. cashmiriensis, is an evergreen species with a height of up to 12 inches and spreads up to four feet. 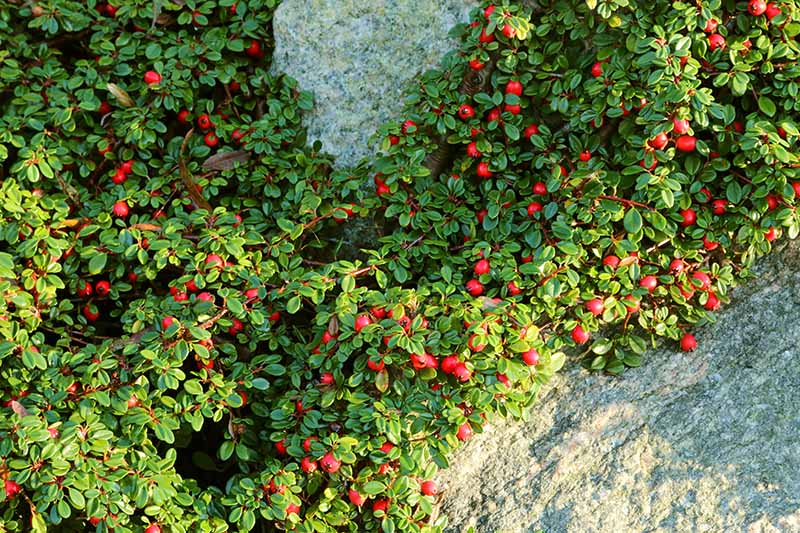 It makes an excellent ground cover or soil stabilizer on banks and slopes and is equally at home in containers or rockeries. It’s also popular as a bonsai specimen.

One of the smallest and slowest growing types, C. microphyllus, or littleleaf cotoneaster, is a mounding evergreen with a mature height of up to 18 inches and a spread of up to four feet. 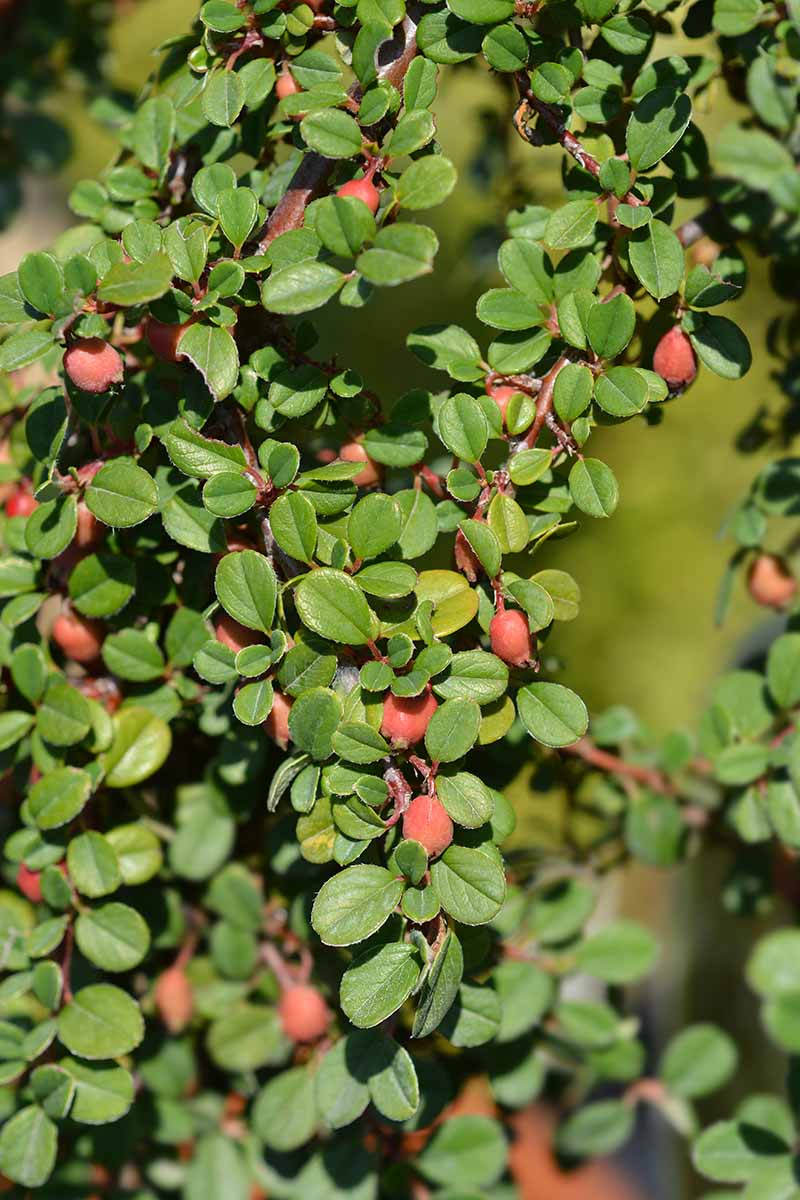 Plants are hardy in Zones 5-9, and are suitable for bonsai, containers, ground covers, rockeries, and other small spaces. 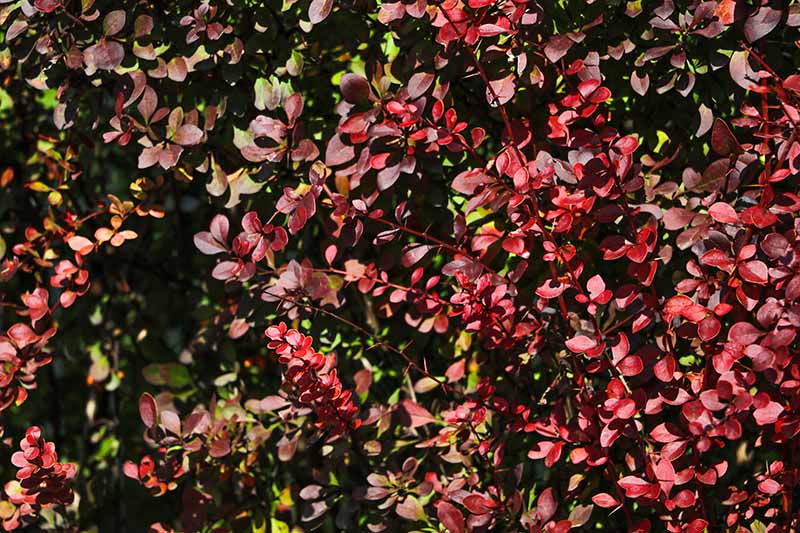 Stems are covered with pretty, single white flowers in late spring and the berries are early to color, turning a glossy crimson in late summer. Can be semi-deciduous in cooler regions, with leaves turning crimson and maroon.

Hardy in Zones 5-9, plants are well-suited for growing as ground covers, slope stabilizers, or as fillers in beds and borders.

The following upright species are commonly used for hedging as well as barriers, foundation plantings, standards, topiary, and windbreaks.

The black-fruited C. melanocarpus is a mid-sized shrub with a rounded form and is extremely drought tolerant once established. 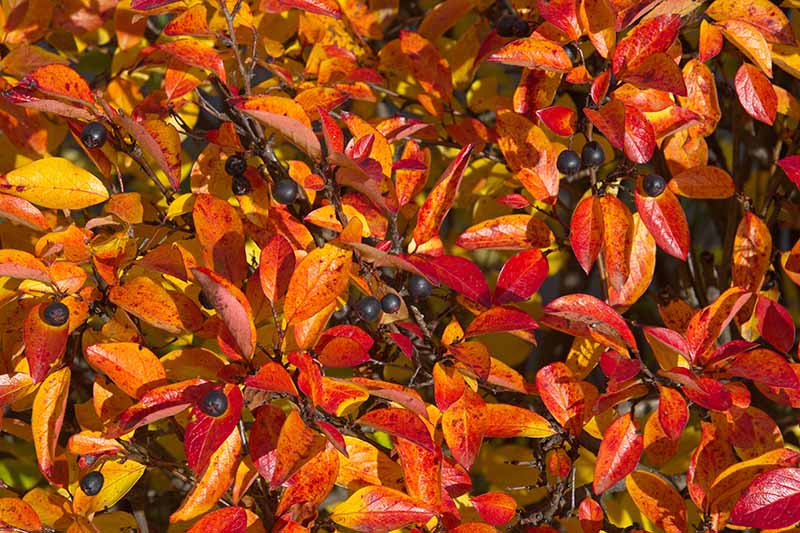 Abundant panicles of pinky-white flowers appear in late spring and pomes emerge as deep orange or red, then ripen to a rich, purplish black. The glossy, ovate leaves shine in blazing shades of orange, red, and yellow in fall.

Suitable for cultivation in Zones 3-7, black-fruited cotoneaster is a deciduous shrub used for borders, hedges, and bank stability. It has a height and spread of four to eight feet.

A good choice for regions with cool summers, the deciduous European species, C. integerrimus, has a multi-stemmed, upright growth of five to eight feet with a similar spread. 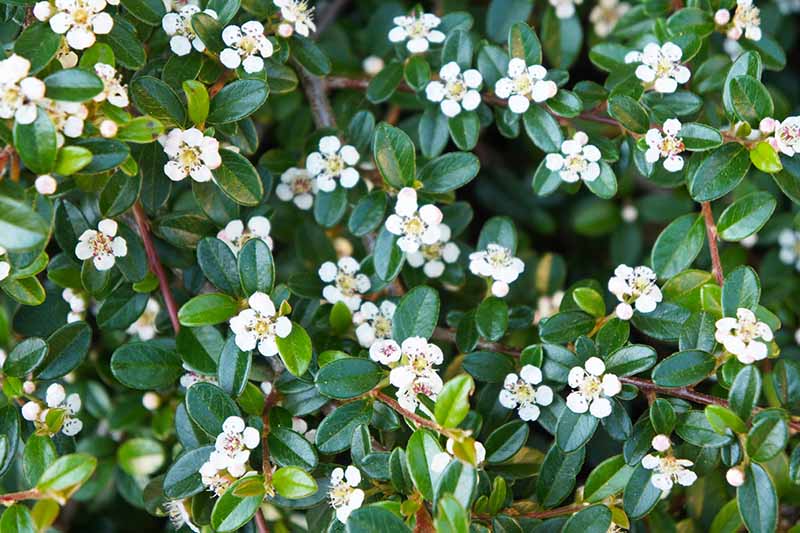 In late spring, the stems are covered with attractive, small cream flowers and dense foliage, then an abundance of rose-colored berries. The dusty green leaves put on brilliant fall colors of burgundy and scarlet.

Popular in conservation projects and for multiple or single-row windbreaks, shrubs can also be used as hedges and summer privacy screens. European cotoneaster is hardy in Zones 3-6.

An outstanding evergreen to semi-evergreen, Franchet’s cotoneaster, C. franchetii, features arching branches with a height of six to 10 feet with a spread of four to eight feet. 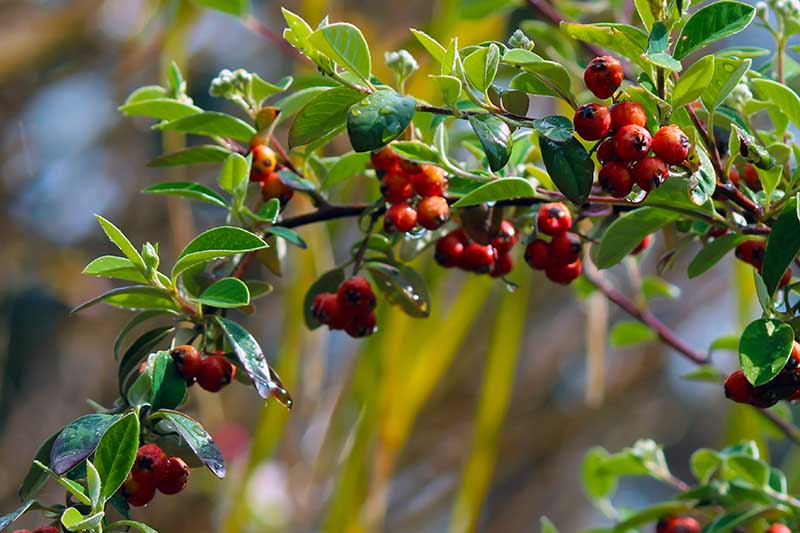 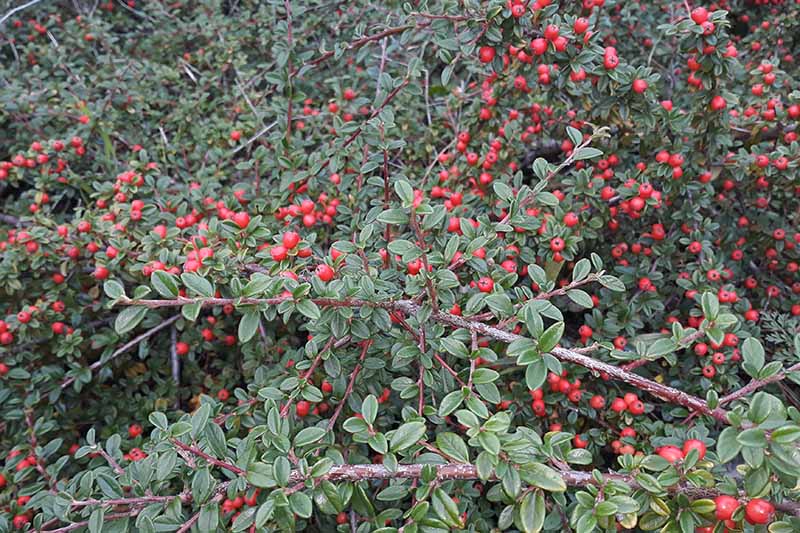 It grows five to eight feet tall with a similar spread and is well suited to planting as a barrier, hedge, or privacy screen and is also a good choice for xeriscapes. Plants are hardy in Zones 7-9. 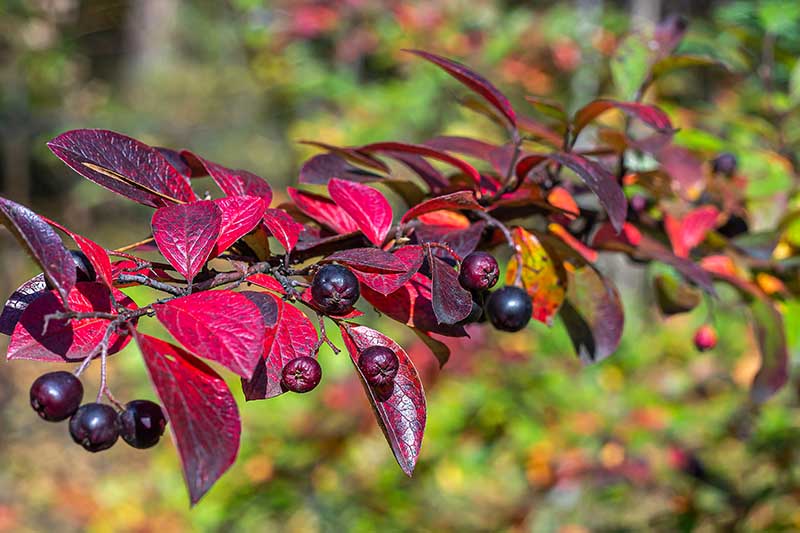 Superb as a foundation plant, along fences and walls, for open or trimmed hedges, and privacy screens, this deciduous species has a height and spread of six to 10 feet. Hardy in Zones 3-7. 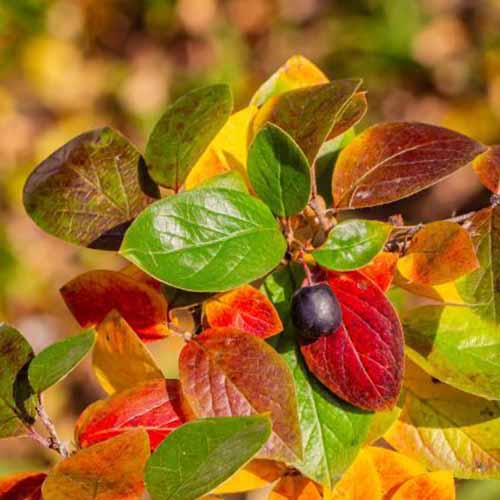 ‘Peking’ is a C. lucidus cultivar that grows to a mature height of eight to 10 feet tall with a spread of five to six feet.

A semi-evergreen variety with an upright habit, Himalayan cotoneaster, C. simonsii, grows six to 10 feet tall with a similar spread. 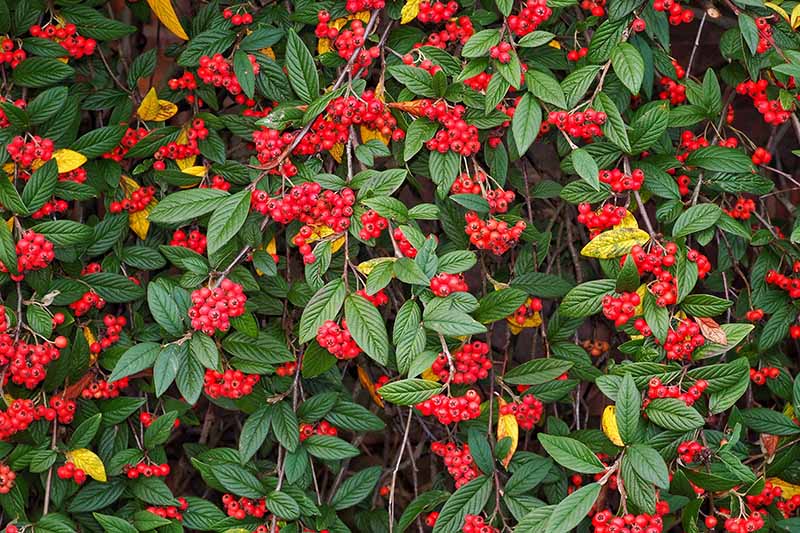 Hardy in Zones 4-8, plants are well-suited for barriers, hedges, screens, or stabilizing banks and slopes.

A vigorous grower with an upright habit and elegant, arching stems, C. bullatus aka hollyberry, is a deciduous shrub with a mature height and spread of eight to 12 feet. 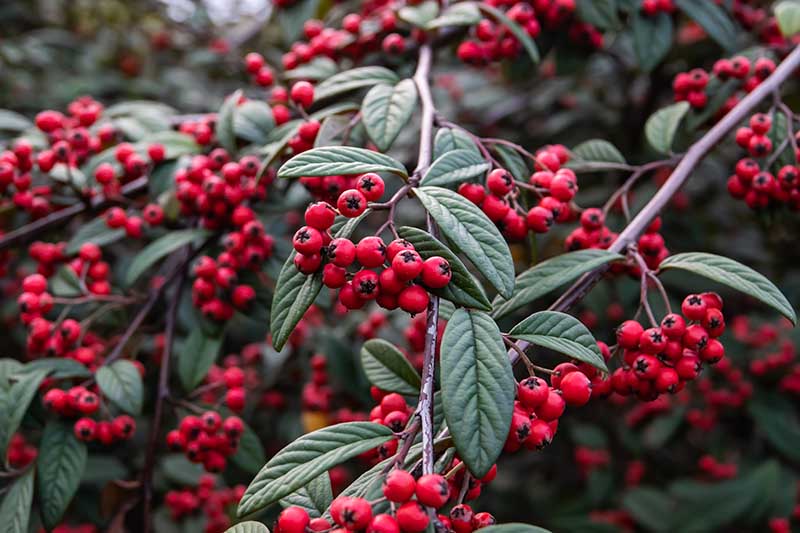 Aptly named, clusters of pale pink flowers give way to an abundant display of large, showy berries that color early. The deep-veined, textured leaves turn intense shades of orange and scarlet in fall.

Useful in the background of shrubscapes, along fences or walls, and for growing as privacy screens, plants are hardy in Zones 5-9.

An evergreen shrub, late cotoneaster, C. lacteus, is also known as milkflower or red clusterberry – for the beautiful clusters of milky-white flowers and bright scarlet berries. 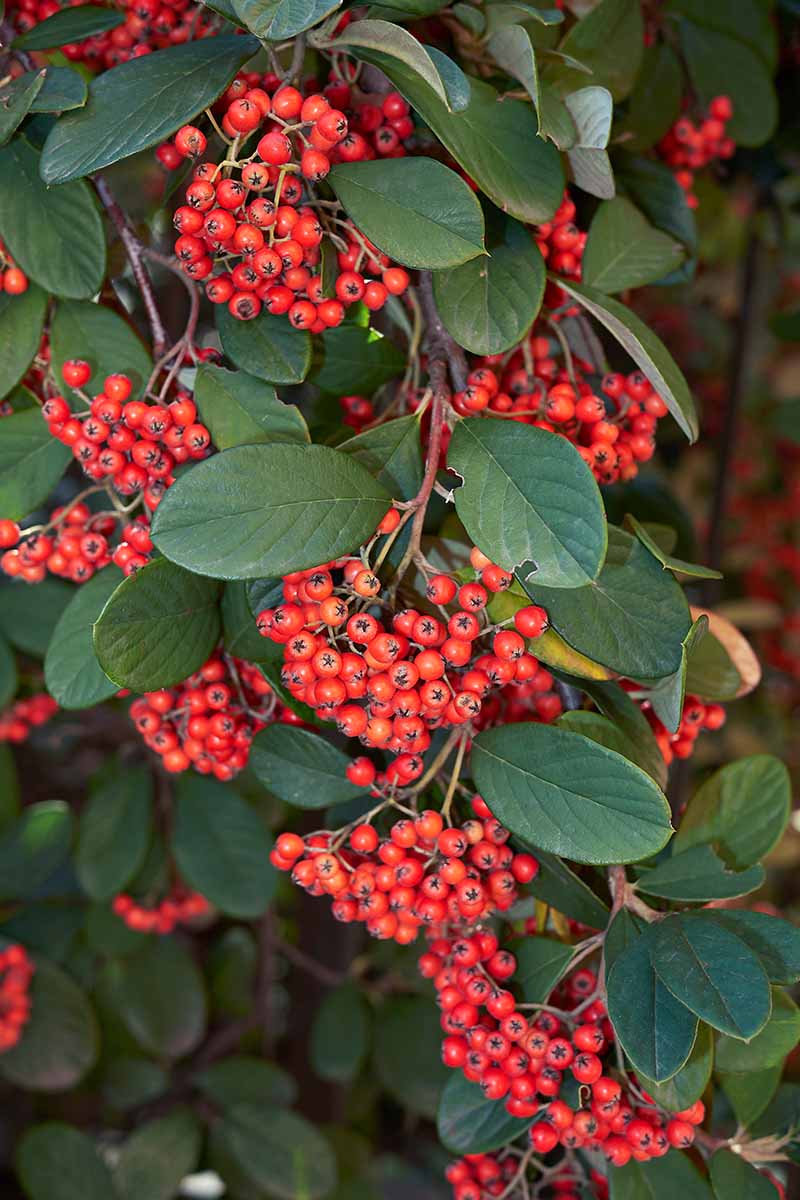 Shrubs grow eight to 12 feet tall with a similar spread, and are attractive for planting as barriers, hedges, screens, or training as standards. Plants are hardy in Zones 6-9.

A large, deciduous shrub, C. multiflorus, aka many-flowered or showy cotoneaster has an upright, mounding growth habit with a graceful, weeping form. 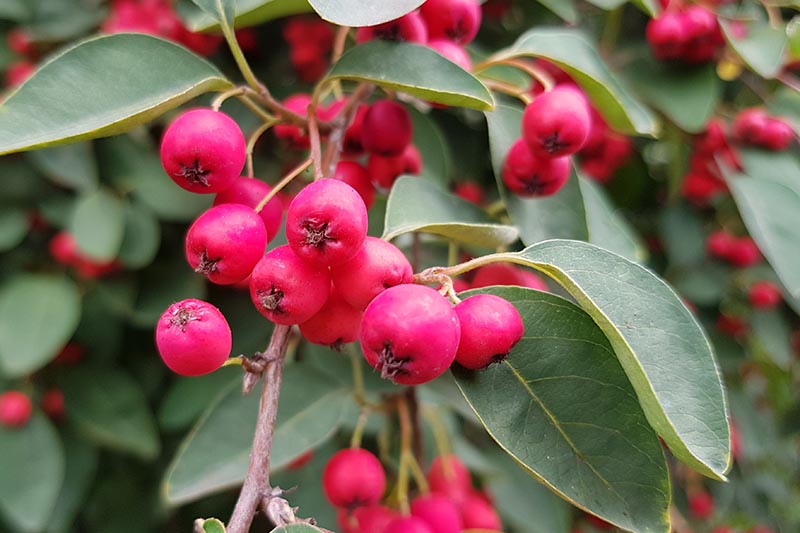 A reliable choice for bank stabilization, planting along fences and walls, and informal or formal hedges. It grows eight to 12 feet tall with a spread of 12 to 15 feet and is hardy in Zones 4-8.

The attractive stem structure of C. horizontalis, aka rockspray or wallspray cotoneaster, makes it ideal for hedges or trained against fences and walls. 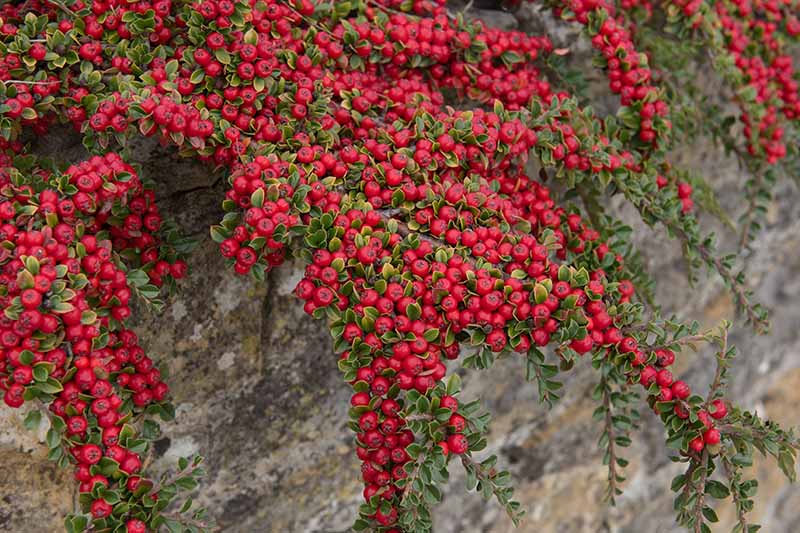 Small white flowers have a hint of pink, and bright red berries adorn the stems in fall along with a gorgeous display of orange-red foliage. These deciduous shrubs are hardy in Zones 5-7 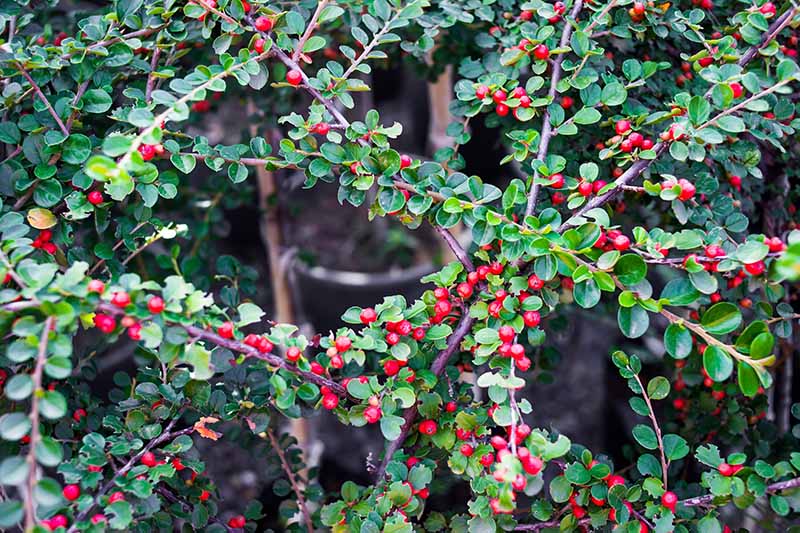 This species also does double duty as a ground cover and is popular for bonsai, as well as for stabilizing banks and slopes. The fanning branches in herringbone patterns spread six to eight feet with a height of up to three feet.

Upright with a handsome, arching form, silverleaf cotoneaster, C. pannosus, is an evergreen species with a mature height and spread of 10 to 12 feet. 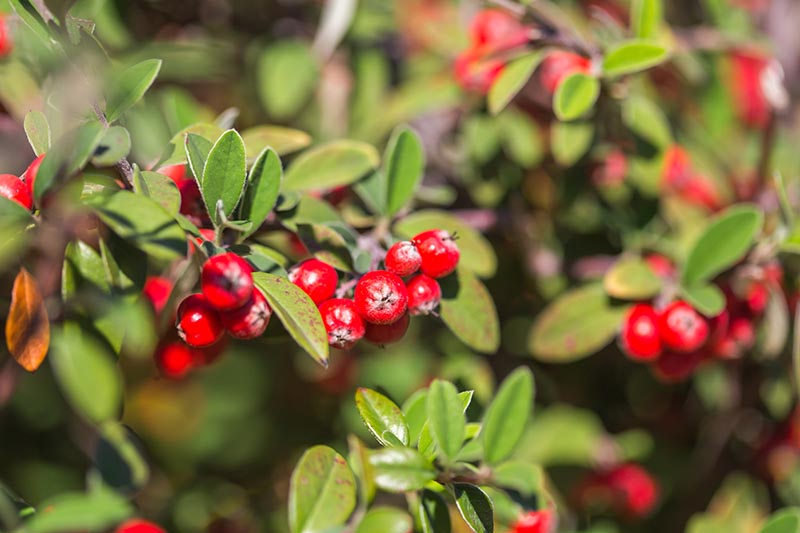 It features dull, dark green leaves that have a silver, wooly underside, and dense clusters of small white flowers in early summer that develop scarlet to burgundy berries.

A good choice for barriers, hedges, or espaliered on fences and walls, C. pannosus is hardy in Zones 7-10, making it a good option in warm regions.

A deciduous species with a rounded, arching growth habit, the spreading cotoneaster, C. divaricatus, is noted for its attractive, densely branched form that grows up to six feet with a spread of six to eight feet. 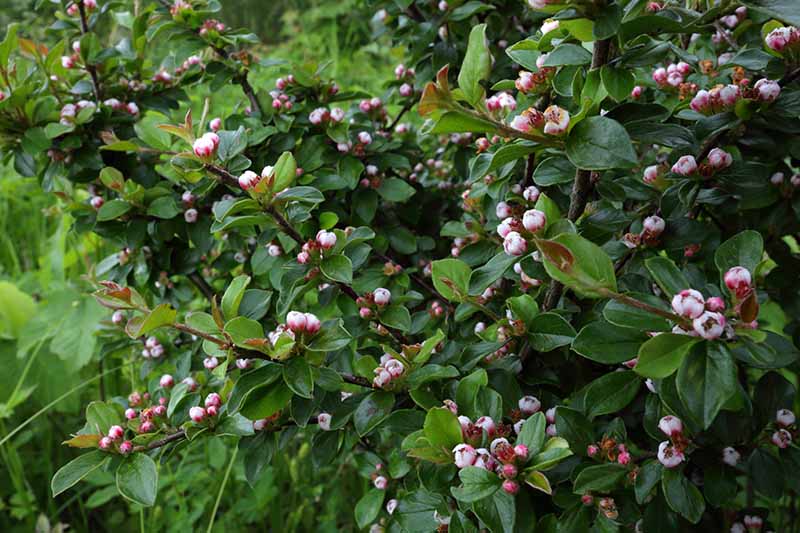 Widely used for barriers, borders, hedges, screens, or grouped on banks and slopes, plants are hardy in Zones 4-7.

One of the best varieties for training into a standard tree form, C. frigidus is a large, deciduous to semi-evergreen shrub that reaches a mature height and spread of 15 to 20 feet, with more compact cultivars available as well. 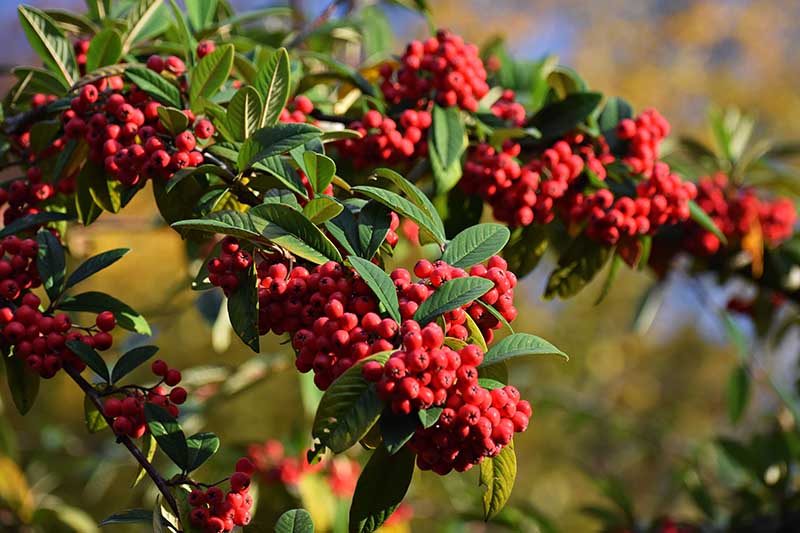 Excellent to prune and feather as a standard, for use as hedging, and along fence lines, the stems are also used for basketry. The tree cotoneaster is hardy in Zones 6-9.

A vigorous evergreen or semi-evergreen shrub with dark green, elliptical leaves, C. x watereri, or Waterer’s cotoneaster, has a height and spread of 16 feet. 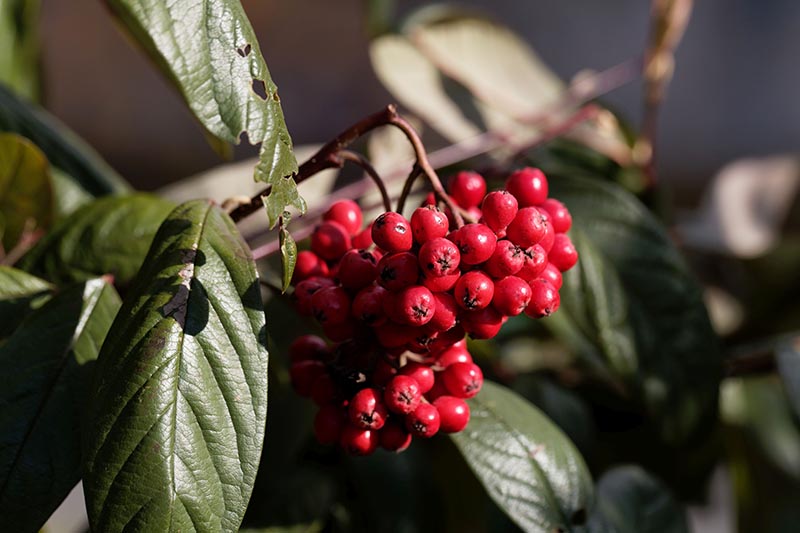 This hybrid variety, bred by John Waterer, nurseryman in the UK, is a cross between C. frigidus and C. salicifolius.

Large clusters of white flowers show in early summer and produce an abundant display of coral to bright scarlet berries.

Suitable for planting as privacy barriers, borders, hedges, screens, and windbreaks. Waterer’s cotoneaster is hardy in Zones 7-10, another good choice for warm regions.

An evergreen to semi-evergreen shrub, C. salicifolius is a vigorous spreader with elegant, arching branches that have a height and spread of 12 to 15 feet. Compact cultivars are available as well. 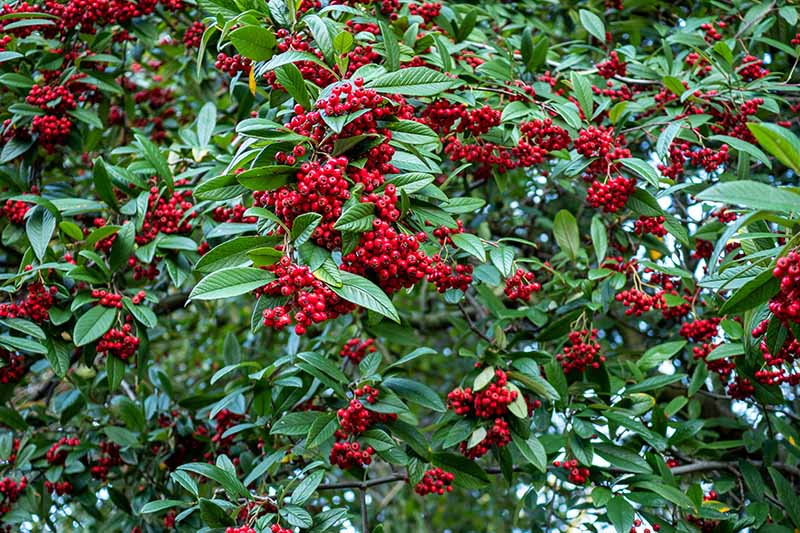 Abundant corymbs of white flowers are followed by ample clusters of scarlet berries. The unique foliage is deeply veined, with lance-like leaves that take on yellow and red tones in fall and burgundy shades in cold winter weather.

Hardy in Zones 6-8, these shrubs make handsome borders, hedges, or screens, and dwarf cultivars are popular as ground covers.

From Bonsai to Windbreaks

Appealing, easy to cultivate, and versatile, cotoneaster provides multiple seasons of interest that can be used in a wide range of garden settings.

From barriers and ground covers to hedges and windbreaks, these hardworking plants do it all – they’re even popular as bonsai plants!

How do you folks use cotoneaster? Tell us about it in the comments below.

And for more know-how on growing ornamental shrubs in your garden, be sure to read these articles next: