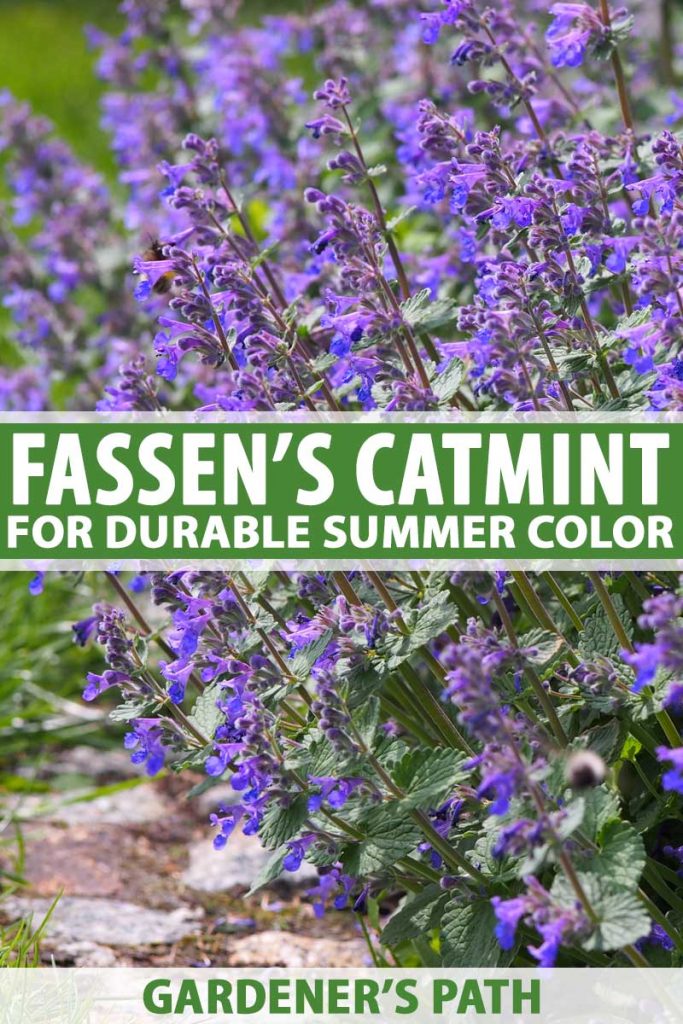 Hey, get your cats straight! CatMINT is not catNIP.

Unlike its cousin catnip (Nepeta cataria), Faassen’s catmint does not drive felines wild, so you are free to plant it in your garden without fear of your yard turning into a hangout for tipsy tabbys. 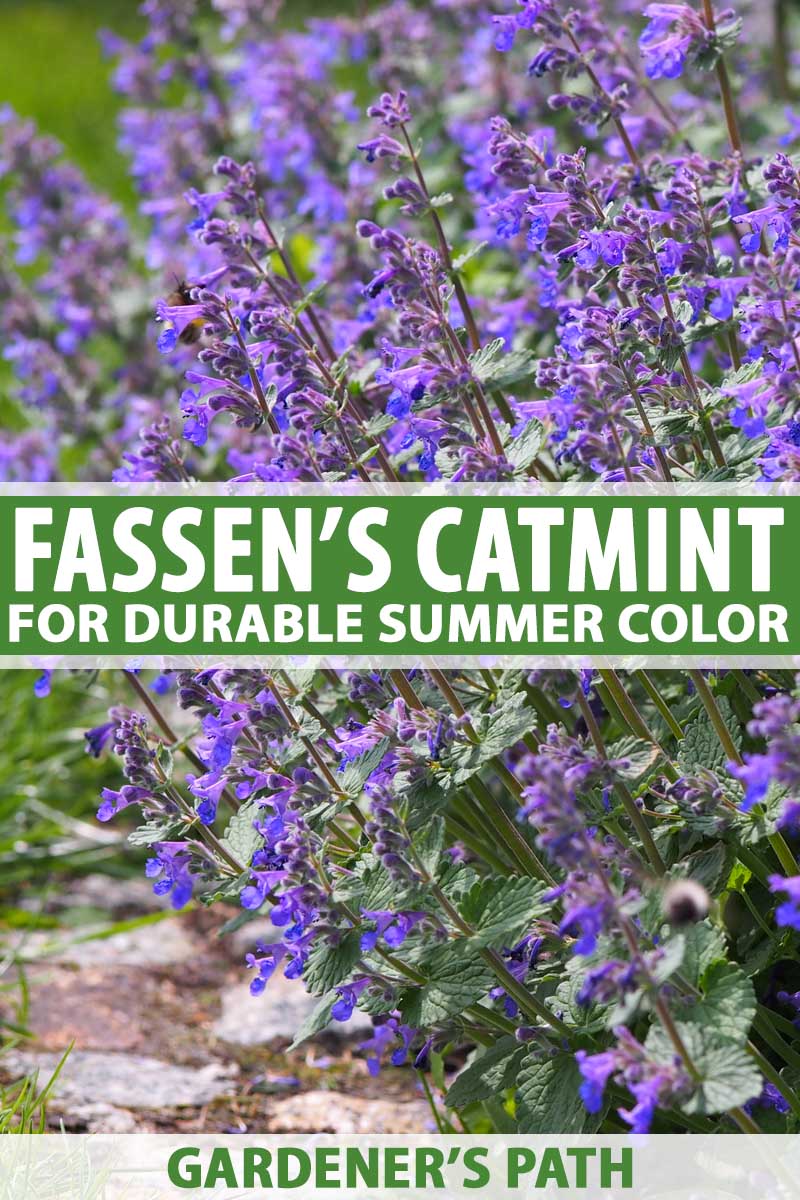 All members of the Nepeta genus produce nepetalactone, the kitty intoxicant, but the amount in Faassen’s catmint is considerably less than the amount found in catnip.

So you may end up with some super-sensitive kitties in your yard, but not a convention.

Once established, it’s heat and drought tolerant, which is why I love it for my Austin garden.

The name of the genus for this plant – Nepeta – derives from Nepete, an ancient Etruscan city now known as Nepi in Tuscany, Italy.

The plants of this genus are native to southern and eastern Europe, the Middle East, central Asia, and parts of China.

Nepeta is a genus within the mint (Lamiaceae) family and includes about 250 different species of catmints and catnips.

Gardening books will tell you this is a full sun plant, but as we’ve discussed, full sun doesn’t always mean full sun.

In the brutal heat and humidity of Texas, for example, it appreciates some shade. When planted in the shade, the plant will be a bit floppy, and function as a ground cover, which is just what I’m after.

It produces spikes of 1/2-inch, lavender-blue flowers that bloom from late spring into fall.

Like it’s mint cousins, it’s a vigorous spreading herbaceous plant that has a tendency to spread if left unchecked.

N. x. Faassenii is sterile, so while it may produce seeds, they are useless.

Glue ‘em to a piece of paper and call it art – that’s all you’ll get out of them.

Divide Faassen’s catmint as you would any perennial. You can get our tips here.

To propagate from cuttings, come springtime, take a sharp knife and cut a four- or five-inch piece of stem, just below a leaf. Strip off all but the top three to four leaves.

Fill a small pot with a rich potting mix; insert a pencil into the center of the pot to create a hole.

Dip the end of the cutting into powdered rooting hormone and insert into the hole in the potting mix. Water well.

You may also be able to find seedlings in local garden centers and online.

To plant them, just dig a hole about the same size as the container the seedling came in, drop it in, backfill if necessary, and give it a lot of water for the first couple weeks.

As mentioned above, if you live in the South, you’ll likely want to plant Faassen’s catmint in a semi-shady spot.

Gardeners from other parts of the country can plant in a full sun location.

It appreciates well-drained soil, but this doesn’t have to be anything fancy – average, dry to medium is fine.

Water well until established, and then leave it alone. I water mine every couple weeks if we haven’t had any rain.

To encourage repeat blooming, trim the plants back by about half after the initial flush of flowers fades.

‘Walker’s Low’ is the cultivar of N. x. Faassenii I most often see and hear about, though this moniker is a bit of a misnomer, because it can grow up to two feet tall.

It has silver-gray foliage, lavender-blue flowers and spreads two to three feet. 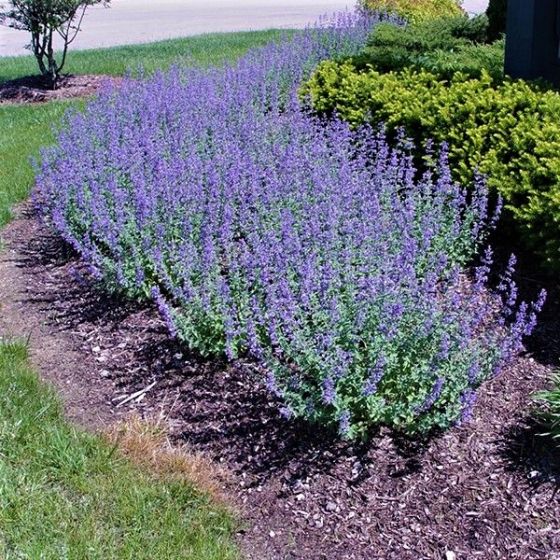 The Perennial Plant Association named ‘Walker’s Low’ its “Perennial of the Year” in 2007.

You can find an 18- to 30-month-old plants in one-gallon containers at Nature Hills Nursery.

Find them at your local plant centers at the beginning of spring.

Other cultivars to look for include:

This plant is really quite trouble-free, but we’ll touch on a few problems you might encounter.

For aphids, blast them off with a stream of water.

In the case of leafhoppers, if the infestation is bad, you might have to pull up affected plants.

If it’s not too bad, use an insecticidal soap such as this one from Bonide, available from Arbico Organics.

Spider mites can be treated with neem oil.

In hot and humid conditions, gardeners might see disease caused by the bacterial pathogen Pseudomonas.

This can be controlled with a bactericide.

Catmint is often used in rock gardens, or as a border plant.

I have some growing in a small area as a ground cover.

Easy as Pie and Feline-Free

Just plop it in well-drained soil, water it for a couple weeks, and then sit back and enjoy. 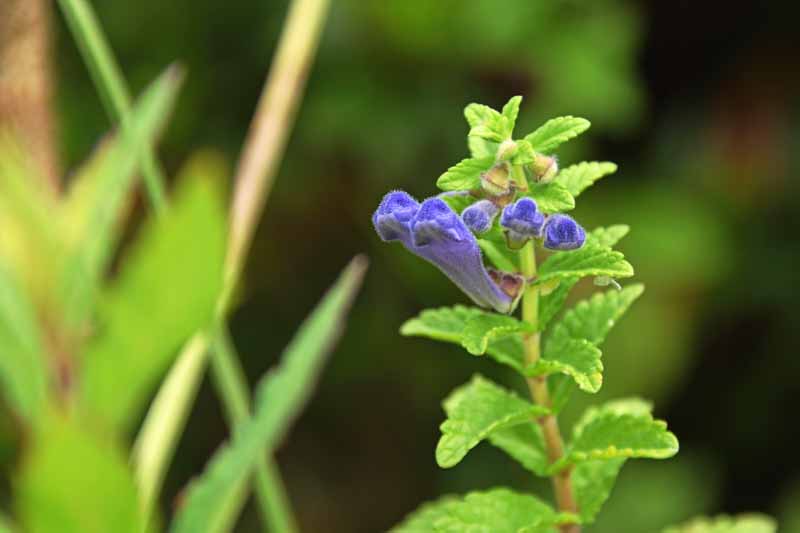 Remember that although it’s kin to catnip, it contains far less of the chemical compound that drives cats wild, so you can safely plant Faassen’s catmint without fearing a clowder of cats will descend upon your garden.

Do you have catmint in your garden? Share your tips and tricks in the comments section below!

And for more herb growing guides, check these out next:

Thank you for this article. I’m trying to find out what – if anything – I can use Nepeta faassenii for as a tea or tincture or for any herbal remedies, since I’ve found it growing in abundance in my friend’s garden. Unfortunately, every site I check, it seems, just treats it as the equivalent of nepeta cataria. I even found an Etsy site advertising Nepeta faassenii with a jar labelled nepeta cataria, as though there’s no difference whatsoever chemically in the plants. Yours is the first article even to HINT that there’s some difference and that they might not… Read more »

Good for you for knowing to rely on botanical names rather than common names, since they can often be used interchangeably to talk about different (or very similar) plants! Unfortunately the scientific nomenclature can at times be a bit confusing as well, as N. racemosa is also sometimes referred to as “dwaft catnip” and N. mussinii is sometimes used interchangeably with N. faassenii, though it seems to depend who you ask. All of these are members of the Nepeta genus, which contains about 250 plants altogether. Though the quantity varies depending on the species, many plants in the Nepeta genus… Read more »