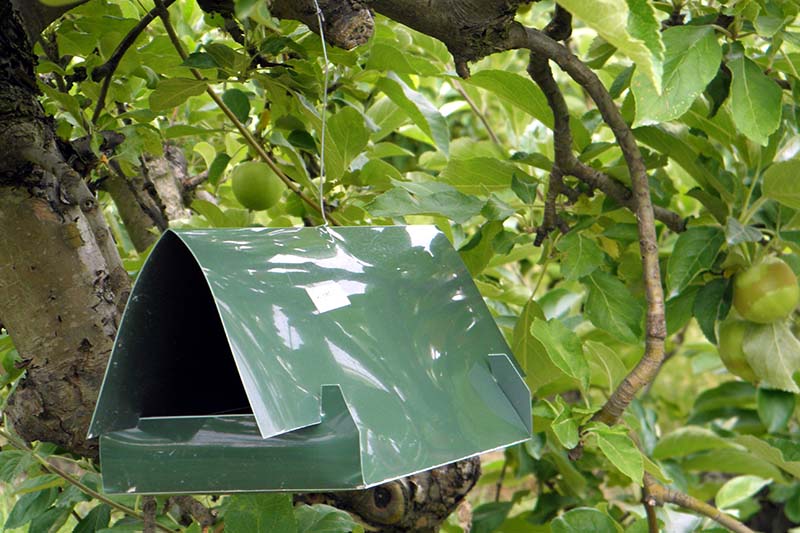 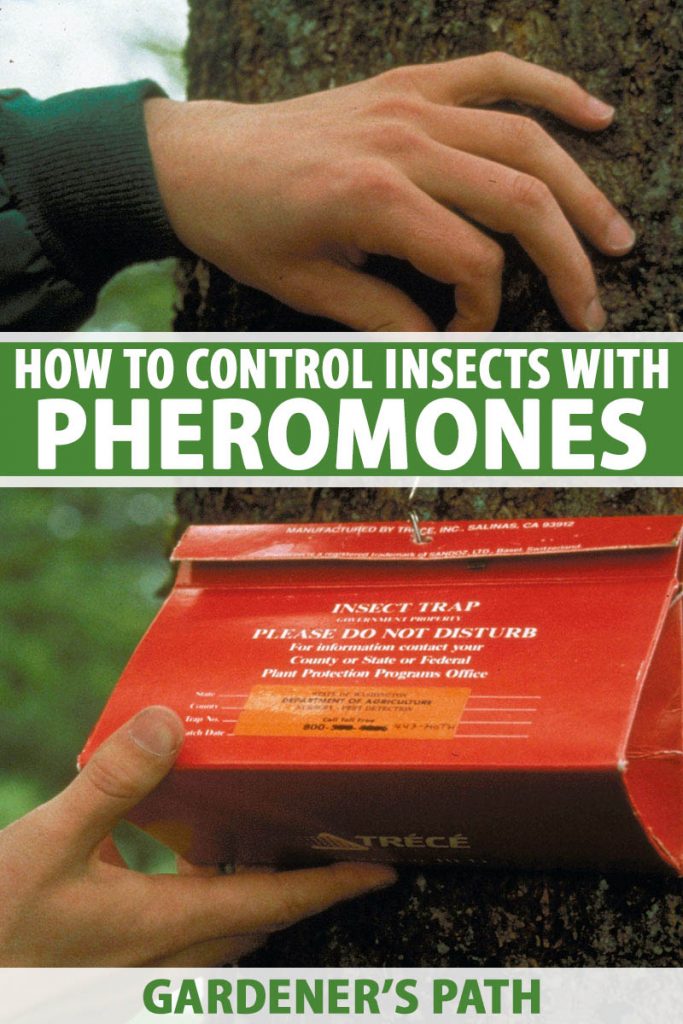 What lures a potential mate? While it may be looks and charm in humans, for insects, it is typically a seductive chemical.

You may have heard of pheromones – chemical attractants.

Scientists have identified pheromones for over 1,500 insects, although only a small number of them are used commercially.

Read on to learn about the many ways in which you can use these hormones to control insect pests as part of your integrated pest management strategy.

Using Pheromones in the Garden

What Is a Pheromone?

A pheromone is a specific chemical that insects and other organisms use to communicate with others of the same species – usually those of the opposite sex.

Once released, the pheromone travels through the air or water before reaching the second organism, which will often alter its behavior in response. 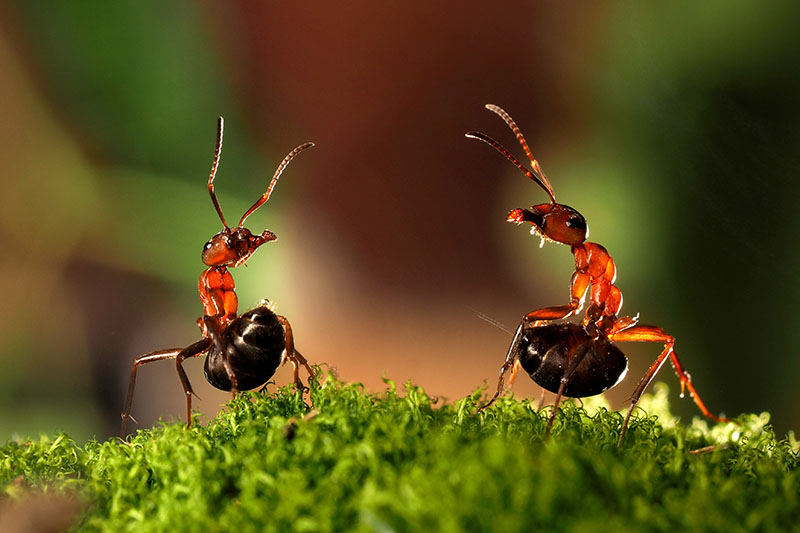 These chemicals are typically used to lure a mate, mimicking pheromones released by females, but some types warn of danger.

Pheromones are active at extremely low concentrations, just 1 millionth of an ounce.

Since their discovery in 1959, chemists have learned to synthesize many in large quantities. This has enabled them to be used on a large scale – primarily in traps.

The ability to lure insects into traps has been a boon to growers and other people who face insect threats on a regular basis.

Use in Monitoring Traps

One of the most common uses of pheromones is in so-called lure traps.

Sticky traps coated with these compounds are placed in a field or orchard before the target insect has become active. 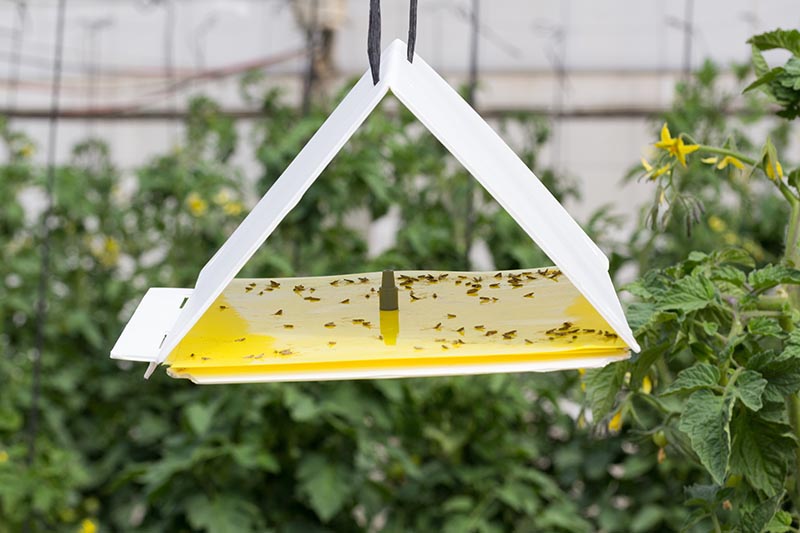 Then, you check them daily for the presence of the insect. Once the insect has been identified, you will know to start rigorously monitoring its levels.

Keeping track of the number of males that you find each week lets you monitor the development of the population over time.

One way you can use this information in your pest management planning is to note the date of the first arrival in your gardening journal, and use a degree day model to predict when the populations will grow large enough that you will need to take action (i.e. spray them with insecticides).

State and university extension offices often provide this information to enable you to use your data to make decisions for pest management.

Other types of pests that are frequently monitored include:

In addition, monitoring traps are used at the national level to track the spread of pests like gypsy moths and Japanese beetles.

In other cases, pheromone traps are used to determine whether potentially invasive insects like those under quarantine have entered an area.

An example is the Asian citrus psyllid, which fills citrus growers and stakeholders with dread.

This insect is a vector for the citrus greening pathogen, which has devastated the Florida citrus industry and has California on high alert.

Another is the Mediterranean fruit fly.

Ports of Entry into the US

Many invasive and destructive pests have entered the US in cargo containers or the wooden packing material in ships.

With about 25 million cargo containers entering the US every year, it is an incredible undertaking to examine all of this cargo.

The US Customs and Border Protection agency employs agriculture specialists who work at 167 ports of entry – sea, land, and air – along with their canine aides.

Cue pheromone traps! They are used at most major ports of entry in North America to identify invasive insects that could pose a threat to US agriculture.

This strategy confuses the males by filling the air with these chemical attractants.

The presence of an excess amount of pheromone means the males cannot locate the females!

And therefore, they cannot mate.

This has been an effective technique for dramatically limiting the populations of some types of insects and reducing the need for insecticides. In some cases, pests have been eradicated from certain localities.

Complications of This Strategy

Biological systems are inherently complicated, and the use of pheromones is no exception.

A reduction in the use of insecticides to eradicate the primary pest can sometimes lead to outbreaks of other types of pests that were also being controlled by a given insecticide.

There are two common examples in orchards:

1. Oriental fruit moths in peaches – Their elimination has resulted in increases in injury by stink bugs.

2. Codling moths in apples – A frequent side effect of the reduced use of pesticides is an increase in leafrollers.

Mating disruption efforts are more effective in fields or orchards that are greater than five acres in area, so this may not be a good strategy for a homeowner with only a few trees.

Also, if the crops or orchards border others that are not being treated, the treatment will be less effective.

If the air is flooded with pheromones, in addition to having difficulty finding mates, the males will probably not be able to locate the traps either.

In this case, the pheromones are stored inside a polymer capsule, which controls their rate of release.

You can spray these formulations through the air like conventional pesticides, and they typically last for 4-6 weeks.

You may need to reapply these several times a season.

The most effective one on the market targets the Oriental fruit moth.

Hand-applied dispensers have a reservoir with an impermeable membrane that regulates the release of the pheromone.

These dispensers are draped, flipped, or twisted directly on the plant.

The labor involved can get expensive for a large field or orchard, but it’s more feasible for homeowners.

In some cases, their use can suppress mating for an entire growing season.

Removal of Insects from an Ecosystem

Another use of pheromones is to capture large quantities of insects that pose a severe menace. 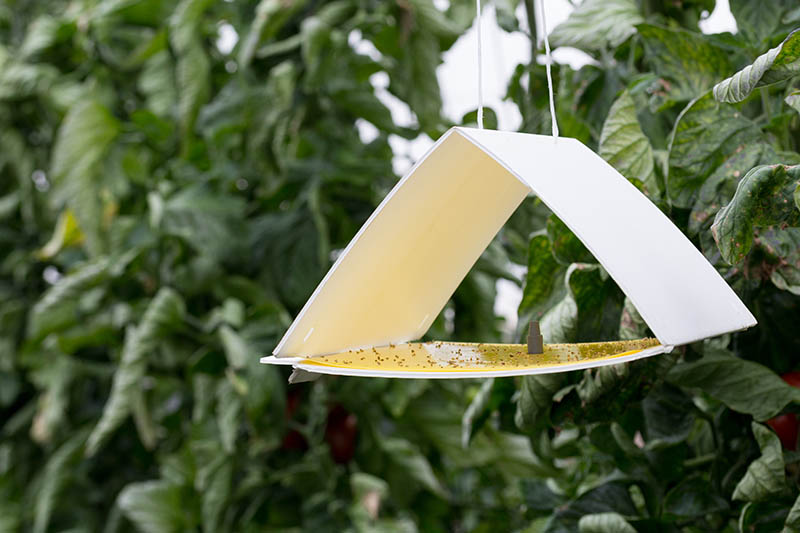 This damage has ravaged forests, leaving large quantities of brittle, dead trees that burn like torches. As many as 85% of the trees have been killed in some localities.

Thanks to pheromones, millions of bark beetles have been lured into traps and away from trees.

A variety of different types of pheromone lures and traps are available at Arbico Organics.

The reusable Scentry Large Plastic Delta Trap is suitable for all types of insects, and pheromone bait is sold separately. 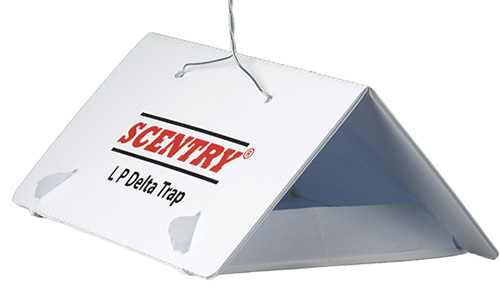 Simply add the lure to the trap to easily monitor pest populations, and disrupt the mating cycle.

These hard-wearing traps are designed to withstand poor weather conditions.

Find packs of 5 or 10 available at Arbico Organics.

Suitable for a variety of insect pests, the Scentry Wing Traps are weather-resistant and work well in orchards and greenhouses, as well as amongst vegetable crops.

The bottom of the trap has a grid pattern to make counting of trapped insects easy.

Pheromone lures are sold separately, and your choice will depend on the insect you are targeting.

Find packs of 5 or 10 and replacement bottoms available at Arbico Organics.

Your choice of lure will depend on the insect species you are targeting.

Both of the above traps can be used with bait for a variety of insect pests including armyworms, cabbage loopers, clearwing peachtree borers, squashvine borers, and many others.

See all the lures available at Arbico Organics.

Specifically designed to trap adult gypsy moths, this half-gallon trap helps to monitor the population of gypsy moths in an area. 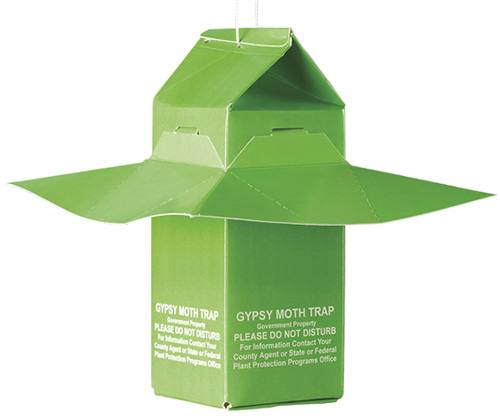 Easy to assemble, the lure is placed in the trap in early summer. Pheromone lures are sold separately.

Doug Johnson of the University of Kentucky’s Department of Entomology provides some practical tips for using pheromone traps in field crops:

1. Make sure to label the trap with the name of the species and the date that the bait was changed.

2. Change the bait once a month

3. Do not leave bait wrappers or spent baits near your traps. They could compete with your bait.

5. Make sure to remove the captured insects during each visit and discard them away from your field or orchard.

It’s All About Hormones

While that kind of statement can be an insult to humans, it is totally accurate for insects.

These potent chemicals can lure male insects into traps to warn you of their presence, so you can take action.

And in some cases, flooding the air with them can greatly disrupt the mating process.

Pretty dramatic results for a compound present at a millionth of an ounce!

Have you had success using pheromones in your garden? Let us know in the comments below.

And to learn more about controlling pests in your garden, you’ll need following guides next: 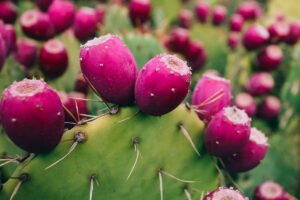 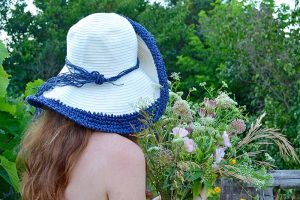