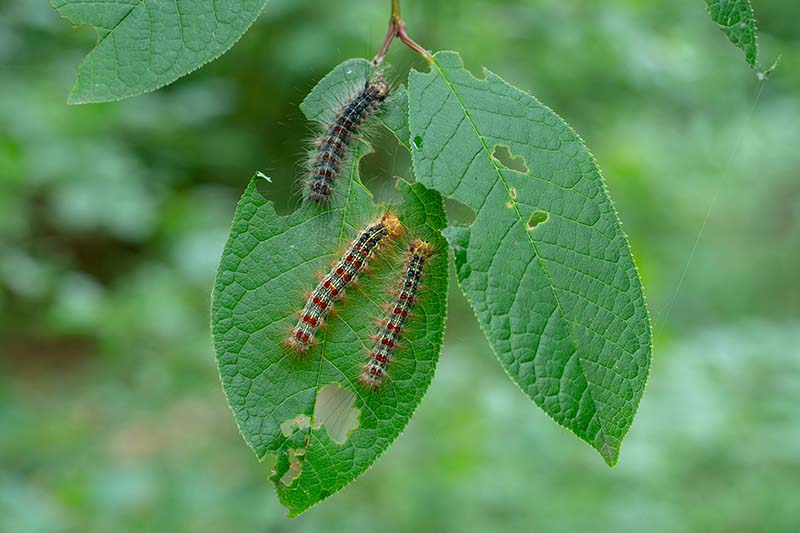 I had to memorize a lengthy list of invasive pests’ Latin names in my pest identification class, and to help me remember, I imagined the trees groaning out a silent mantra of despair when they realized a generation of the defoliating caterpillars of Lymantria dispar were emerging.

The name has stuck in my head ever since.

Though the moths themselves are harmless, their larvae are menaces to trees, chewing holes in the leaves and sometimes stripping the foliage entirely.

Luckily, there are some steps you can take if you notice them in your landscape.

We’ve compiled everything you need to know about these chewing pests in this guide.

What Are Gypsy Moths?

The name gypsy moth, as of July 2021, is no longer recognized by the Entomological Society of America as the official common name for Lymantria dispar.

However, until a new name is found, you’re likely to see use of this outdated and offensive moniker continue.

L. dispar is native to Europe, Asia, and north Africa, and was introduced to North America 130 years ago.

Since then, it has become established in the northeastern US and eastern Canada, and is classified as an invasive, regulated pest.

Have you ever noticed signs along the highway, begging you to not move firewood?

This moth is one of the reasons. It is believed the primary way they spread from one region to another is on firewood and other outdoor items such as furniture, camping equipment, and trailers.

The caterpillars will chew on over 300 species of plants, especially trees, both hardwood and softwood.

About 150 of these, including oak, maple, birch, alder, and hawthorn, all highly valued ornamental and forest trees, are considered favored hosts. Sometimes they will even attack conifers.

Not only can they defoliate trees with ease, the resulting twig and branch dieback is unsightly in both sylvan and urban settings, and severely infested trees are weakened, becoming more vulnerable to disease.

Most mature trees are resilient and will produce a second flush of leaves once the infestation subsides, usually by late July.

They will be stressed, but most will survive a few years of damage as long as there are no other serious stressors present such as drought or disease.

However, conifers won’t regrow their needles in the same season, and are more vulnerable to damage.

If infestations occur in public places, a rain of frass (caterpillar feces) from the tree above a vehicle or picnic bench is not appreciated. The caterpillars’ hairs can also be irritating to people’s skin.

Adult females have white or light beige wings, but they can’t fly.

Males are smaller than the females, and have brown wings with dark markings and feathery antennae, which they use to sniff out their mates.

Both male and female adults have an inverted V pointing to a dot on their wings.

Eggs are laid in tan masses that are often one and a half inches long and three-quarters of an inch wide. New masses are firm to the touch, while old ones are pale in color and crush easily.

Larvae are dark colored and up to two and a half inches (six centimeters) long, with long dark hairs, and five pairs of blue dots followed by six pairs of red dots down the back.

Pupae have a dark red-brown shell.

This pest completes one generation per year.

Females lay 500 to 1,000 eggs in masses on the trunk or branches of trees and cover them with hairs from their abdomens. The eggs overwinter and hatch in April.

The larvae immediately climb up the tree and begin to feed. Young larvae will feed during the day, but as they grow older, they will transition to feeding mainly at night.

Young larvae will sometimes crawl to the top of the tree, produce a silken thread, and fly on the wind to new pastures. Or trees, rather.

Larvae will feed for four to six weeks before pupating in a sheltered spot. Adults emerge after 10 to 14 days in late July or early August.

Since the females can’t fly, the males must seek them out by detecting their sex pheromones.

The adults lack mouthparts so they don’t feed, and will only live as long as is needed for mating and egg laying, often less than two weeks.

Thanks to several natural control agents, which we will discuss below, populations tend to ebb and flow.

Localized outbreaks lasting for two to three years before collapsing and remaining low for five to ten years are common, however, outbreaks across large areas can last much longer.

Some regions’ government agencies and other groups do extensive monitoring with traps to track outbreaks and determine whether aerial sprays or other control measures are necessary.

These traps are baited with the female sex pheromone, which attracts the males, and allows them to find new populations and make population forecasts.

The traps are not effective at controlling or reducing populations.

You can find Scentry Gypsy Moth Traps and Lures at Arbico Organics.

As a tree owner, you can keep an eye out for the obvious egg masses on bark or other surfaces to predict whether you may have gypsy moth damage the following year.

Keeping an eye on when the caterpillars have hatched is essential for treatment with contact or ingestion controls, if you decide to use them.

Even after a year or two of heavy damage, healthy trees can survive.

However, the damage is quite ugly, so combine a variety of the control methods described below as part of an integrated pest management (IPM) strategy to reduce pest numbers.

Beginning well before these pests become an issue, keep your trees healthy. This will help them to be resilient against L. dispar attacks.

Drought-stressed trees are more vulnerable, so water your trees deeply once per week during dry periods in the summer and fall.

Avoid damaging roots and the trunk, such as with a weed eater or other garden tools.

Plant a variety of trees, and try choosing less susceptible species, although this can be hard because the insects have so many favored hosts!

If you notice egg masses, wait until after the first frost to scrape them off. Soak in soapy water for a couple days before disposing of them.

Waiting until after frost is helpful to allow any beneficial parasitoids to develop and emerge from the eggs, boosting their populations.

Starting in June, wrap tree trunks with burlap, leaving a flap for the caterpillars to shelter under during the day. Knock any hiding larvae that you find into a bucket of soapy water.

You can also apply a sticky barrier such as Tangle-Trap Sticky Coating, which is available from Arbico Organics, on the trunk to capture any larvae that are crawling up and down.

Do not apply it directly on the trunk; first wrap a layer of tape around the tree and apply the product to the tape.

Alternatively, try Stiky Tree Wrap, also available at Arbico Organics, which is a wrap that’s already covered in adhesive and ready to be applied to the tree.

This is where things get interesting. It turns out Nature (with a capital N!) has a few tricks for controlling L. dispar up her sleeve.

White-footed mice, birds, parasitoids such as Ooencyrtus kuvanae, and caterpillar hunters all prey on this insect.

Besides these helpful beneficials, there are two disease pathogens which are the main reasons outbreak populations tend to collapse after a few years.

The fungus Entomophaga maimaigi, which favors cool, wet weather, attacks this moth species specifically, causing the larvae to dry out and hang upside down stiffly from the trunk of their host.

It was introduced to the United States from its native range in Japan in 1910, and again in 1985 and 1986, and since 1989 has been a very effective biologic control.

L. dispar multiple nucleopolyhedrovirus (LdMNPV) is always present in sublethal amounts in populations of this species, and may affect the females’ size, reducing the number of eggs she can lay.

During outbreaks, the virus eventually gains the upper hand, and lethally damages the internal organs of the larvae.

The larvae hang limp, in an upside-down V shape from the bark and branches, their insides liquefy, and they disintegrate. Beware of handling them at this stage: they are very smelly!

LdMNPV has been formulated into several pest control products, including Gypchek, which is used by the USDA Forest Service, and Dispavirus, which is used in Canadian forestry.

Using pesticides is difficult. Affected trees are often too tall and broad to reach the chewing pests with contact products.

Rather than scraping the egg masses off, you can also spray them with horticultural oil, such as this product from Monterey that’s available from Arbico Organics.

However, you will need to reapply it several times to achieve penetration and control.

The larvae are susceptible to Bacillus thuringiensis v. kurstaki bacteria or Btk, a microbial agent which is available in a variety of formulations including Bonide Thuricide.

Btk must be consumed by the larvae to have an effect, and young larvae are more vulnerable. Spray it on the leaves of susceptible trees when the larvae are young, starting soon after the eggs hatch.

Systemic chemicals, those that are absorbed or injected into the plant and transmitted from root to tip, are the solution for large trees infested with the caterpillars.

Trees may be injected with a systemic pesticide such as emamectin benzoate or imidacloprid, which will kill the larvae chewing on the leaves.

Keep in mind that in general, many chemicals are toxic to beneficial insects, pollinators, and fish, so use them with caution!

A bald tree is never a good look, whether it’s in your backyard or in the forest.

While outbreaks usually only last a few years thanks to the virus and fungal diseases Nature provides to knock down populations, it can be frustrating for the gardener and stressful on the tree to be attacked year after year by these pests.

Luckily, there are a few options available, including some cultural, physical, and biological methods, as well as chemical controls if necessary.

Have your trees ever been stripped of leaves by L. dispar caterpillars? Let us know down in the comments below how long the outbreak lasted in your area, and how you dealt with them!

And while you’re at it, read about other plant-chewing larval garden pests here:

Sylvia Dekker is a nature-inspired creative with a bachelor’s degree in agriculture, a history of Canadian province-hopping, and a life filled with brown thumbs, bee stings, and tan lines. When Sylvia travels, on mountain or steppe, she harvests knowledge, experiences, and honey, goes starry-eyed over each tiny plant, and writes about it all.
More Posts
Subscribe
0 Comments
Inline Feedbacks
View all comments 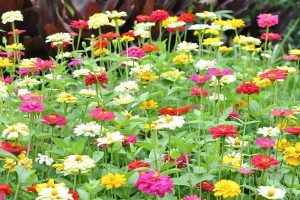 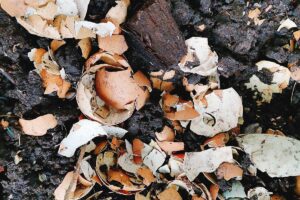