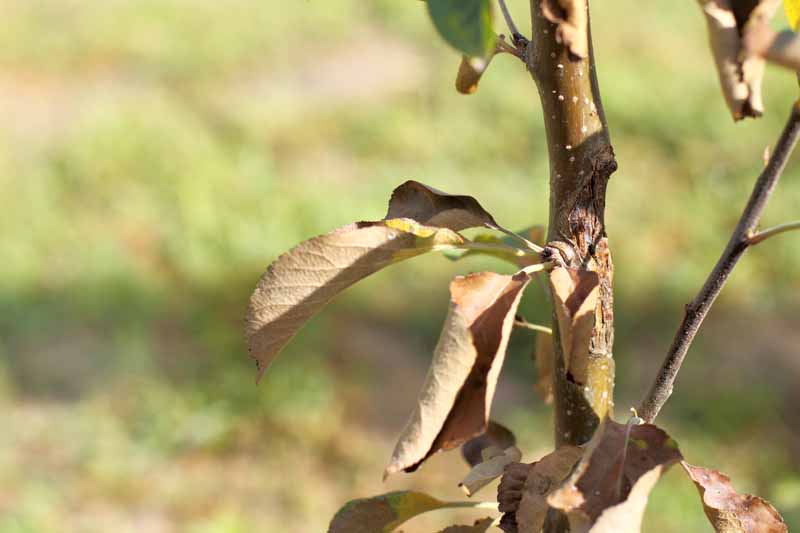 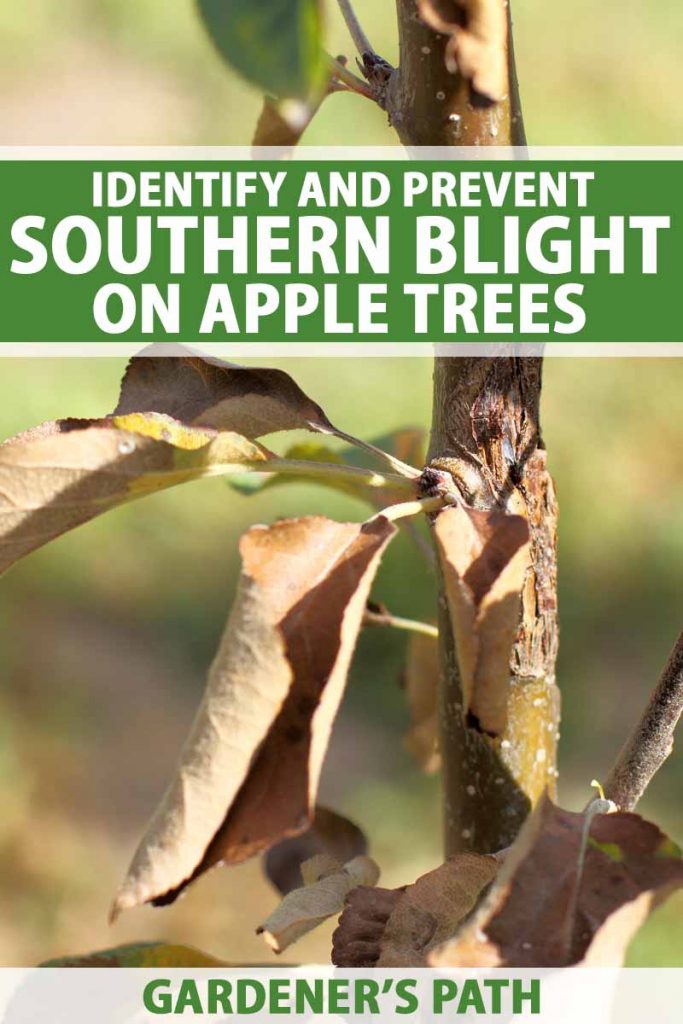 What do you call a fungus that can infect hundreds of types of plants and live on organic matter in the soil for years?  A gardener’s nightmare!

In this case, the nightmare is called southern blight or southern stem. An insidious fungus called Sclerotium rolfsii (also known as Athelia rolfsii) causes this disease. It can rapidly kill apple and crabapple trees, black walnut, and roses among many others.

The name “Sclerotium” is a giveaway to what enables this fungus to be such a successful pathogen. It produces small resting structures called sclerotia that can both live on organic matter and infect plants.

Symptoms on Apple and Crabapple Trees

Once you notice the infection on your apple or crabapple trees, it will be too late to save them.

Look for sudden wilting, the death of stems, and yellowing leaves, which will stay on the tree. These symptoms typically manifest in the heat of the summer. Your tree’s stems may turn brown and die near the soil line.

A telltale sign is the web of white mycelia on top of the soil and the lower stem or trunk. The mycelia will produce the sclerotia, which are round, yellow or pink round objects 1/8 of an inch or less in diameter.

Trees typically die soon after the symptoms become visible, although they might survive for a month.

How to Prevent Southern Blight

Like most other fatal apple diseases, avoiding the problem is your best bet. And we don’t mean ignoring it!

If you know that southern blight has been active in the area, don’t plant a tree there. Common crops that can serve as reservoirs of infection include tomatoes, soybeans, peanuts, and clover.

Obsessing about hygiene can help prevent southern blight. Since the fungus thrives on dead plant tissue, be sure and remove any organic matter from the base of your tree. Part of this strategy includes not letting crop residues build up there. And make sure and control weeds under your tree.

To the best of our knowledge, there are currently no chemicals registered that can control southern blight.

Your Tree Will Become More Resistant with Age

The only bright side is that as your tree gets older, it will be less susceptible. One- to three-year-old apple trees typically contract the most severe southern blight infections.

The reason for this is that the bark will get thicker as your tree gets older. The fungus will have more difficulty penetrating it to cause infection.

Geography May Spare Your Tree

As the name suggests, southern blight typically infects plants in the southern part of the US. Northern growers are usually (but not always) spared this plant killer.

Southern blight on apples is a particular problem in the Piedmont region in the southeast. (The long region stretching from New Jersey to Alabama) And it has been reported in nurseries and commercial orchards in Texas.

Avoidance is Your Best Bet

Since southern blight is usually fatal to apple and crabapple trees, do everything in your power to avoid infection.

Don’t plant apple trees in areas known to harbor this fungus. And keep weeds and crop residues away from your trees.

Have you lost a tree to southern blight or been able to save one? If so, share your experience with us in the comments.

Are you still trying to identify the disease infecting your tree? To learn more about apple tree diseases, check out these guides next: