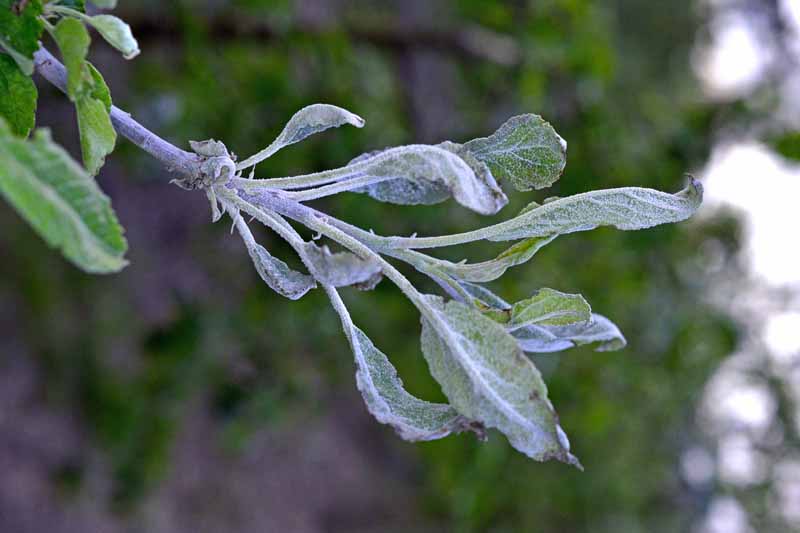 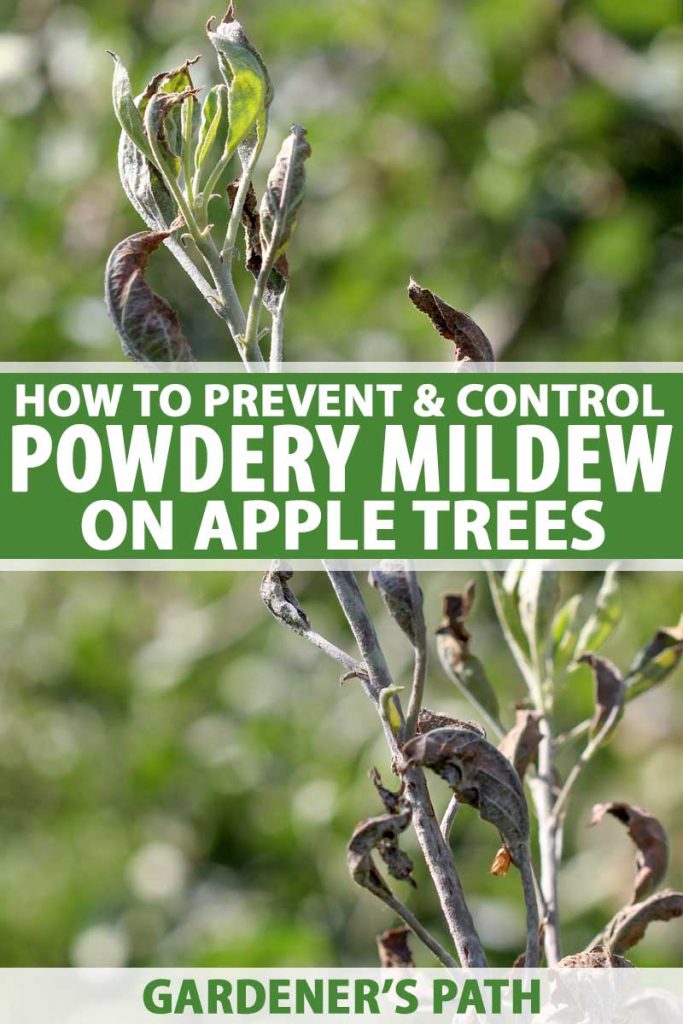 While powdery mildews don’t kill their hosts, they sure do a number on them. And that is particularly true for powdery mildew of apples and crabapples, Podosphaera leucotricha.

The apple powdery mildew attacks both cultivated and wild apples and crabapples. And it occurs in the all regions of the world that produce apples!

Powdery mildews get their name from the white spores that are produced by the mycelia (fungal threads). The disease on apples attacks virtually every stage of the plant – buds, blossoms, new shoots, leaves, and fruit.

The disease can be severe enough that no fruit form.

While fungicides are the standard treatments, there are some cultural practices that can help control this disease.

Unlike most fungal infections, apple powdery mildew spores do not require moisture to germinate. Therefore, this infection is known as the “dry weather disease.”

Read on as we at Gardener’s Path walk you through the steps you take to diagnose and treat powdery mildew infection on your apple or crabapple tree.

If your tree is infected, the first thing you will notice is a delay of up to four days in the opening of the infected buds in the spring. These buds are covered with spores.

Next, the leaves and blossoms become covered with the fungal spores as they emerge from their buds. The spores look like a light gray or white powder, and the infected leaves curl upward. 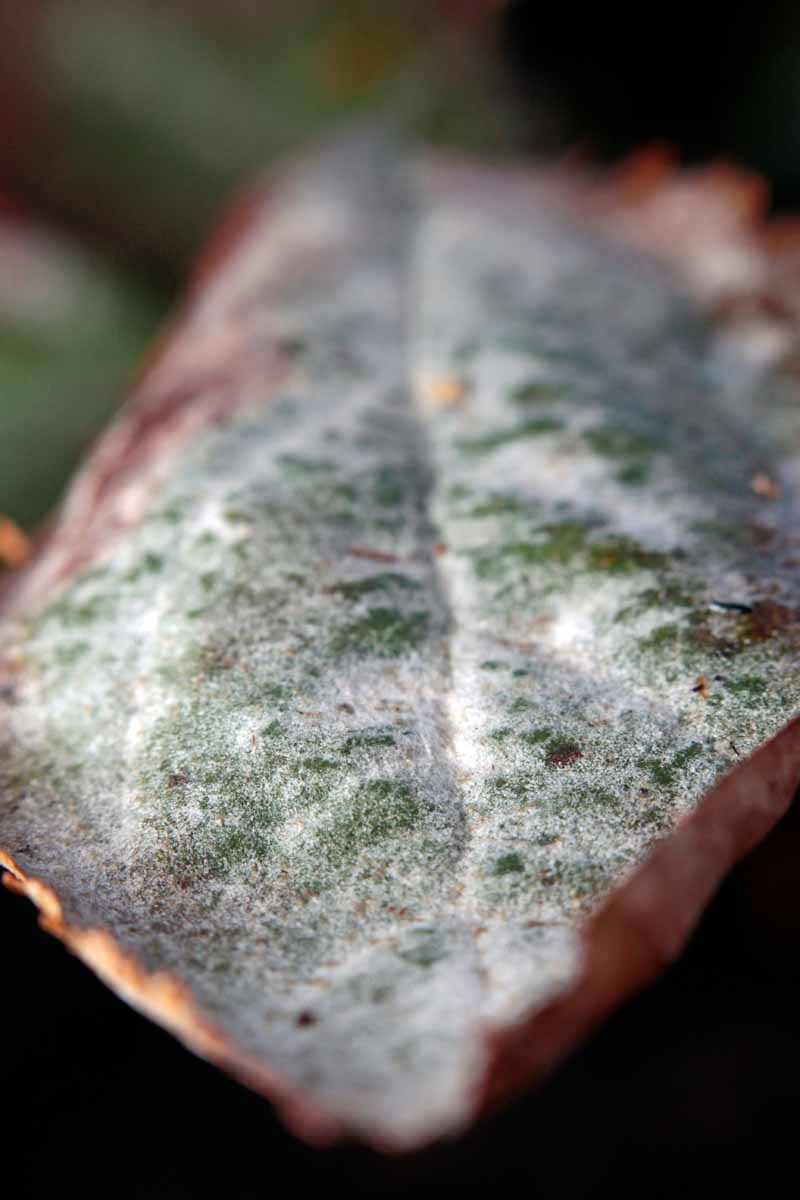 Both sides of the leaves and tree shoots will be covered with this powder.

An Infection That Won’t Stop

These spores are easily blown by the wind and cause secondary infections on new shoots, leaves, and fruit.

As long as the shoots continue growing, the leaves and shoots can continue to become infected.

The infections typically occur at night at 65 to 80 F when the relative humidity is greater than 70%. While this sounds really high, it is common on the lower leaf surface.

The disease on the leaves occurs first on the bottoms and may appear like chlorotic spots on the top of the leaves.

As time passes, the tissues that are infected develop the classic silver-gray powdery mildew appearance.

Fruit that is infected will come down with discoloration and netlike reddish brown colors. It may also be distorted and/or dwarfed.

High levels of powdery mildew at the end of the growing season can damage the tree in two ways. First, it can increase the number of infected buds, so you will have a high level of infection next spring. And second, it can inhibit the formation of flower buds, so that there will be fewer or no fruit produced the following season. 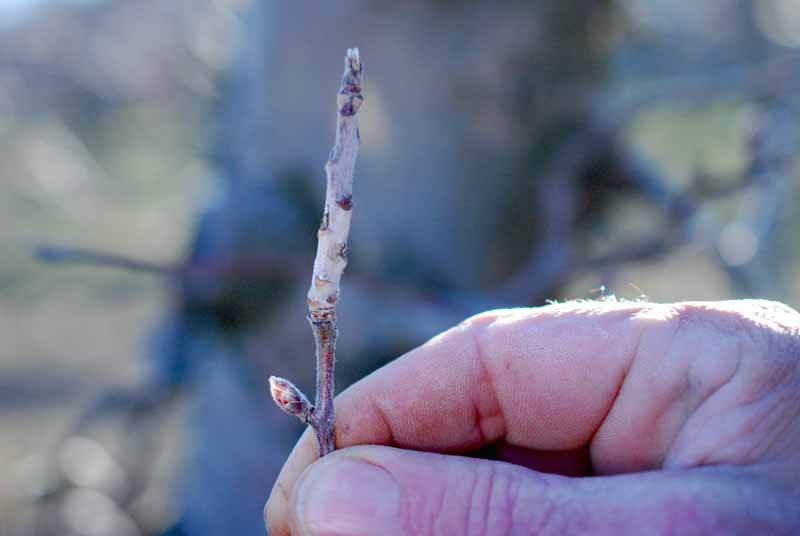 And if that isn’t bad enough, a tree that is heavily infected with powdery mildew can become susceptible to additional types of infections.

You should prune any shoots that appear white in the early spring, so they won’t spread spores.

Be sure and disinfect your pruning shears afterwards, and destroy all the infected plant parts, so the disease won’t spread.

Avoid the excessive use of fertilizer, especially in the late summer. This will prevent succulent new tissue from growing, which is easily infected by the fungus.

Another thing you can do to protect your tree is to plant it in a sunny area, since excessive shade, high humidity, and poor circulation all increase the chances of infection.

Since this is such a difficult disease to control, and it is critical to eliminate the spores that will keep infecting your tree, you may choose to apply fungicides. Be sure and choose ones that are labeled specifically for fruit trees.

You have a choice of low toxicity fungicides like horticultural oils. These include jojoba oil, neem oil, and brand name spray oils designed for fruit trees.

Classic fungicides that are used against apple scab, such as sterol inhibitors, are highly effective at controlling powdery mildew. These include myclobutanil and fenbuconazole.
Since the fungus overwinters inside buds, you should start treating your tree early in the season before the blossoms start to show a pinkish color.

The failure to spray before the blooms opens is one of the most common mistakes made in controlling this disease according to the American Phytopathological Society.

Be sure and repeat the sprays at 2-3 week intervals until the new shoots stop growing. That could mean as many as 18 sprays if your cultivar is highly susceptible!

Also be sure to continue spraying even if the weather becomes dry. Unlike most other foliar pathogens, apple powdery mildew continues its growth and spore production in dry weather.

Faithfully applying the fungicides will reduce the need for future applications.

You can also spray sulfur fungicides before the symptoms appear.

Be careful with sulfur. You can harm the plant if you apply it within two weeks of a fungicide or if the temperatures are greater than 90 F.

This class of fungicides includes the classic Bordeaux mixture of copper sulfate and lime. This combination is highly effective at preventing powdery mildew and is certified organic. You can buy a pre-packaged mixture designed for small gardens.

The ultimate prevention technique is to plant resistant varieties! Some of the most popular cultivars are the most susceptible – Granny Smith, Jonathan, and Rome for example.

Some of the more common resistant cultivars include:

Although apple powdery mildew will not technically kill your crop, it can debilitate the tree to such an extent that it could be unable to produce any fruit.

This disease is widespread on wild and cultivated apples and crabapples in every part of the world in which they are grown.

Therefore, it is critical to know the symptoms of this mildew, so you can be ready to take action as soon as you see infected tissue.

You will need to spray with some sort of fungicide – sulfur, horticultural oils, or sterol inhibiting fungicides. A strict spray schedule may help save your tree from this aggressive pathogen.

Have you successfully fought off powdery mildew on your apple or crabapple tree? Let us know how your battle went in the comments.

And if you’re still trying to identify a specific disease on your apple tree(s), then some of these guides may be of assistance: