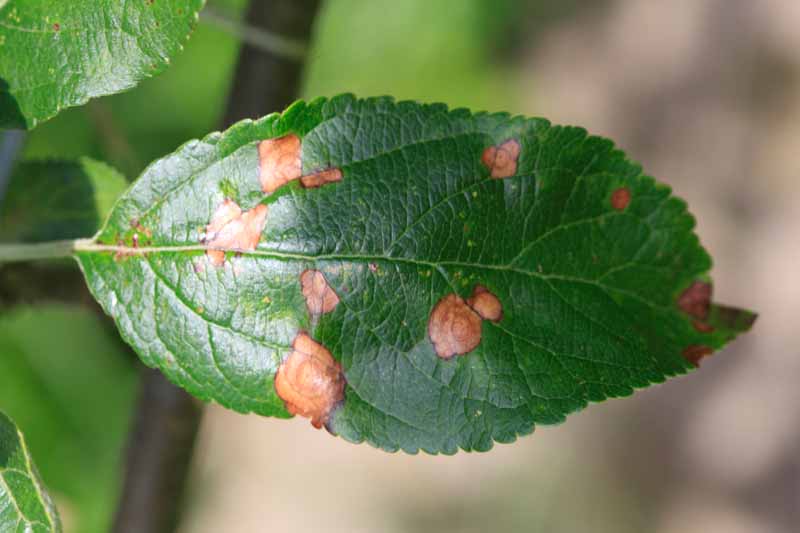 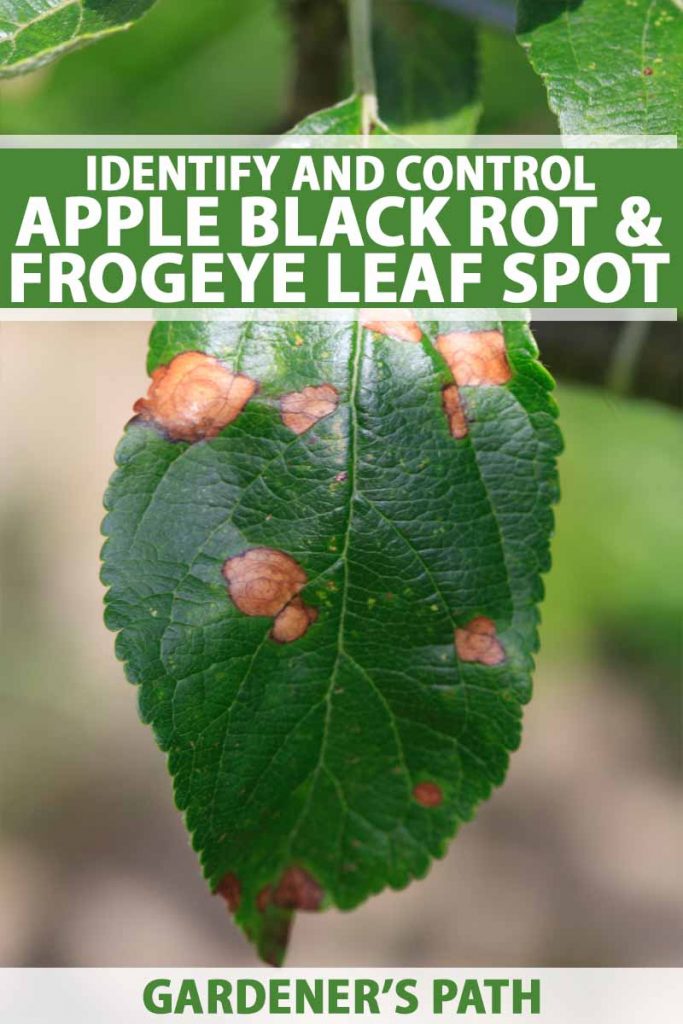 The fungus Botryosphaeria obtusa can cause devastating losses to apples and crabapples over a wide geographical range and especially in warm humid climates.

It does this by causing three different types of diseases:

Part of the reason why this fungus is so widespread and ready to attack your apple and crabapple trees is that it grows on the dead tissue of many other host plants. However, its ability to cause disease is limited mainly to pome fruits (apples and pears).

Another reason is that the fungus is skilled at lurking in dead apple tissue. It commonly colonizes apple limbs that died after fire blight and can enter through a variety of wounds – including pruning cuts.

There are many ways you can act to eliminate places the fungus can lurk and produce spores to spread its insidious growth. Depending on how badly your trees and/or fruit are infected, you may need to spray fungicides.

Read on to learn what symptoms to watch for and how to control black rot and frogeye.

This fungus causes reddish brown cankers that are slightly below the level of the healthy bark around it. One unusual characteristic of these cankers is that they tend to spread more quickly along the length of the branch rather than going around it.

If not pruned out, the cankers can expand each year. When you see black bumps in the cankers, you know that the fungus is producing the spores that will try to infect more tissue.

The first signs of infection are small purple spots on the top of the leaves in the early spring. These lesions then expand to circles up to ¼ inch in diameter. While the margins of the lesions will stay purple, the centers turn brown.

The holes grow in size and start to resemble the eyes of a frog. Heavily infected trees develop chlorosis and can drop all their leaves. Obviously, this stresses the trees.

While it’s pretty obvious when fruit start to rot, black rot manifests in an unusual manner. The rot is usually just at the calyx (flower) end of the fruit.

Bitter rot also manifests at the calyx end. You can tell the difference because black rot on fruit only causes one spot, while bitter rot produces a number of spots.

If the fruit start to rot early in the season, the lesions start as reddish spots and progress to be purple surrounded by a red halo.

Rots on mature fruit turn black and are sometimes surrounded by a red halo. As the rotten area grows larger, concentric bands from that alternate between black and brown.

The rotten fruit become firm and leathery and eventually develop into dead mummies on the tree – ready to serve as a source of inoculum for future infections.

The Importance of Removing Infected Tissue

This insidious fungus overwinters on the trees, and it is ready to strike once the spring rains start.

The cankers in the dead tissue left over following a fire blight invasion can be a tremendous source of spores. And the dead bark can be another major source, as can the mummified fruit left over on the tree.

The black rot fungus produces two types of spores that can lead to infections. Conidia are one source. They spread primarily through water. The other type of spore is ascospores that are blown through the air and mainly infect in the fall.

Rains result in thousands of conidia oozing out of the diseased tissue. Splashing rain, insects, and wind all serve to spread the spores to cause new infections.

Temperature has an enormous effect on whether infection will occur. If the temperature is between 61 and 90 F, both conidia and ascospores can germinate in four hours.

Eighty degrees F is the optimal temperature for the leaves to get infected. In contrast, for fruit infection to occur, the temperatures must be in the range of 68 to 75 F during a wetting period of at least nine hours.

In addition, the fruit can be infected through injuries that occur during harvesting. If this happens, they can decay while they are stored or even after removal from storage.

How to Control Black Rot and Frogeye Leaf Spot

Hopefully, you are now well aware of the importance of getting rid of these sources of fungal infection. This is the primary method of control.

Remove the cankers by pruning at least 15 inches below the end and burn or bury them. Also take preventative care with new season prunings and burn them, too.

You are better off pruning during the dormant season. This will minimize the odds that fire blight will infect your tree and produce dead tissue that can easily be infected by Botryosphaeria.

If you must prune during the season, consider treating the sites with the antibiotic streptomycin or a copper-based fungicide.

You should also take precautions if the bark is damaged by hail, or branches break during a windstorm. Using a copper-based fungicide will protect against both black rot and fire blight.

Although black rot cankers, fruit infection, and frogeye leaf spot can cause serious losses on apples and crabapples, you can minimize this damage by taking preventative measures to limit the sources of the fungal spores. And fungicides are also an option to keep these diseases at bay.

Still looking for an apple tree disease identification? Some of these guides may help you: