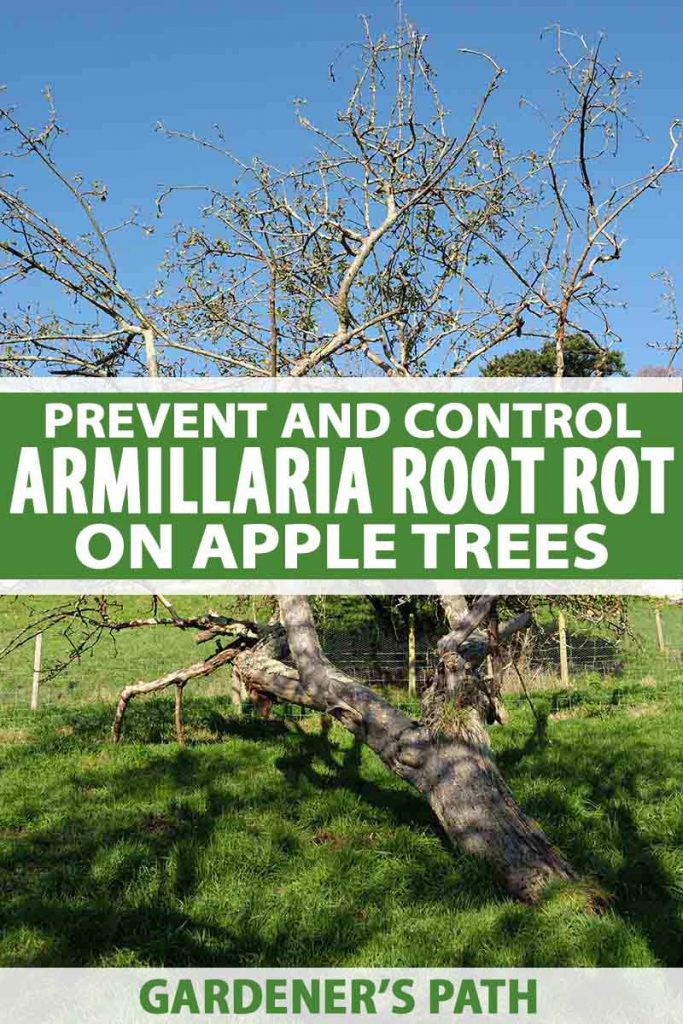 The fungus Armillaria is truly a menace to apples and a number of other fruit trees, ornamentals, crops, and shrubs. 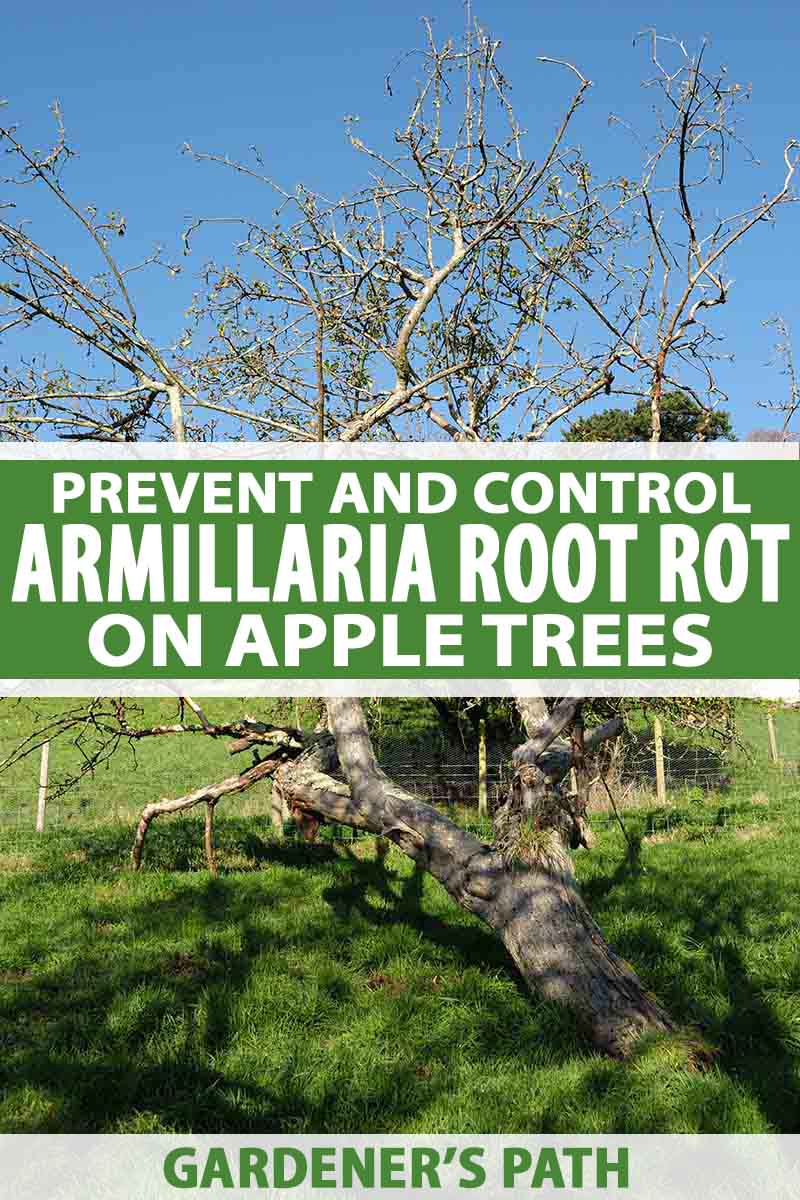 Often referred to as the honey mushroom, shoestring fungus, or honey fungus, the Armillaria genus consists of a number of different species that can be devastating to an orchard.

What Is Armillaria Root Rot?

Armillaria is found throughout the world in both tropical and temperate regions, and it has been found in nearly every state in the US.

In addition to apple, some of the fruit trees that this pathogen attacks include peach, nectarine, apricot, almond, citrus, avocado, and loquat. 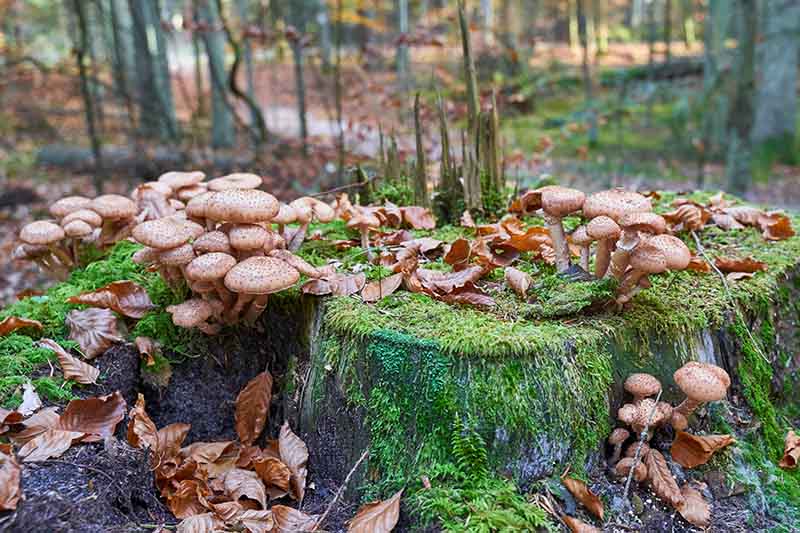 Veronica Basnayake of the North Carolina State University, in a study of soil borne plant pathogens, described this fungus as “one of the most prominent killers and decayers of deciduous and coniferous trees and shrubs.”

According to Melanie L. Lewis Ivey, an extension plant pathologist at the Department of Plant Pathology at The Louisiana State Agricultural Center reports that Armillaria is one of the leading causes of the premature death of fruit trees in the Southeast.

Part of the reason for this is that Armillaria can live in the soil for decades on large pieces of roots and fragments of stumps – ready to pounce as soon as a specimen growing in the vicinity becomes stressed and susceptible.

Although there is no effective control of this pathogen, as it is resistant to fungicides, there are steps you can take to minimize this devastating infection.

Read more about this how this fungus affects apricots here.

Unfortunately, your tree may be infected long before any symptoms start to appear.

The first indication of an infection is often wilted or yellowing foliage, loss of leaves, or dieback of the branches, and more terminal growth. Eventually, in the case of a bad infection, it will die.

Even if your apple is showing obvious signs of distress, at first it might be difficult to figure out that Armillaria is the culprit, as it infects from underground.

Attacks by other fungal root rot pathogens, bark beetles, or rodents can mimic the symptoms of this root rot.

However, as the disease gets worse, some symptoms will develop that will indicate that it is infected with this fungus. 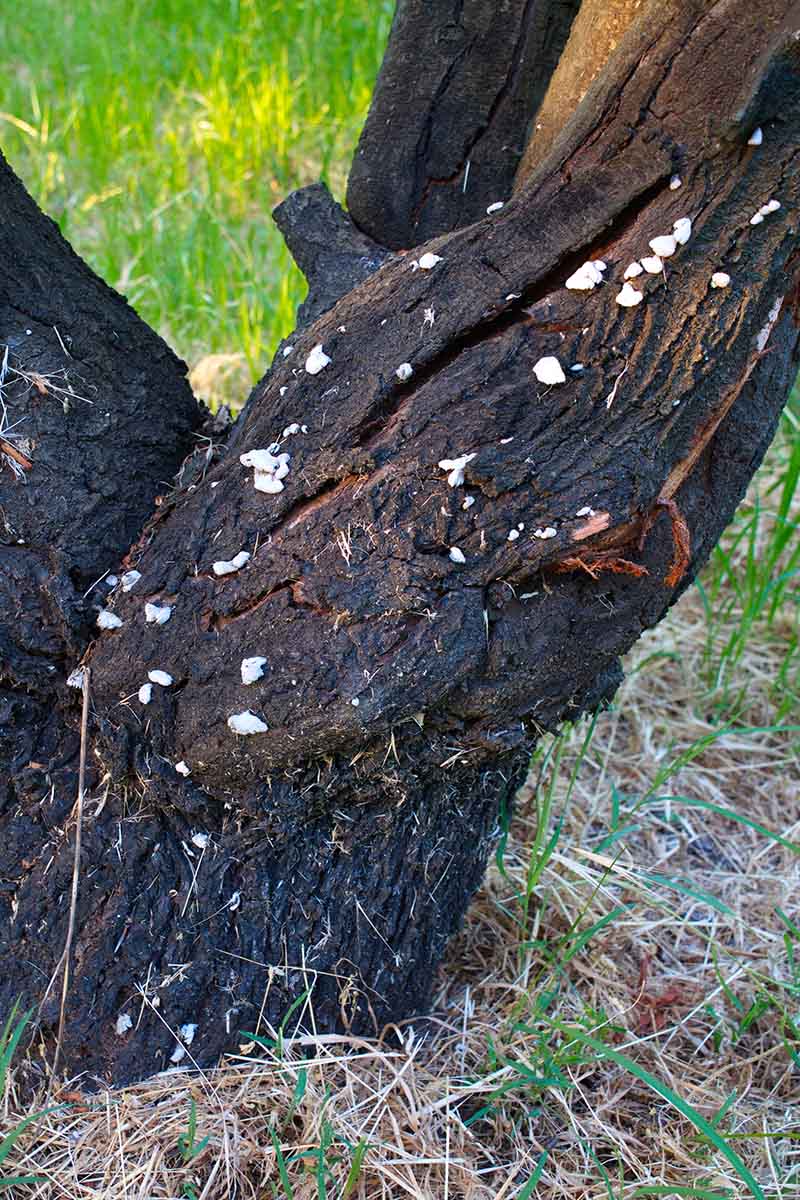 Large dark colored cankers will form on the larger branches and trunk. In many cases, the cankers will ooze resin.

And then there are the three classic symptoms of this disease:

Mycelial fans will become apparent in the area between the inner bark and the wood.

If you scrape back the bark near the cankers or at the base of the trunk, you will see a white growth, often in a fan-like pattern.

Rhizomorphs are another indicator. These are dark shoestring-like structures made up of fungal threads that grow in the soil, on the roots, and underneath the bark. 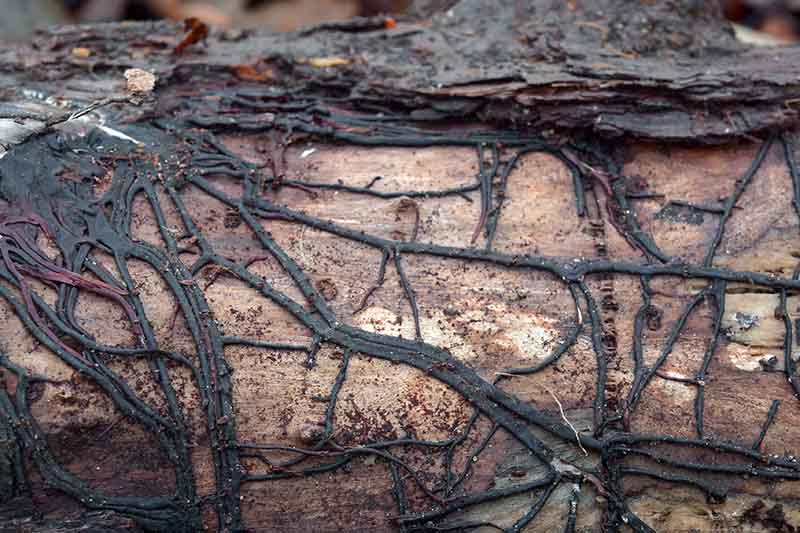 If you remove some of the soil at the base of the trunk, these rhizomorphs can often be visible as dark strands attached to larger roots.

Clusters of small, brown mushrooms often grow at the base of infected trees during fall and winter following a rain. Although many of these are actually edible, that probably won’t make up for the loss of your apple crop.

This type of root rot is the most common in home orchards planted where hardwood forests have recently been cleared.

This is a problem because the soil is often full of infected pieces of wood from which the fungi can spread underground.

The rhizomorph structures can spread up to 60 feet from an infected stump, and survive for many years on dead or dying roots. Additionally, rhizomorphs growing from the roots of an infected specimen can grow into the roots of uninfected trees and spread the disease.

Young trees are especially susceptible, as are established ones that have been physically damaged, or placed under stress by drought or flooding.

Sometimes spores from the visible mushrooms can be carried through the air to spread infection, although this is a less frequent problem, as they will only grow on wood that is already dead.

How to Prevent Armillaria in Apples

The best way to prevent this common and devastating root rot is to avoid planting in infected soil, and to keep your apple in healthy and robust condition.

1. Choose Carefully Where You Plant

If you will be planting where a hardwood or oak forest once grew, try to remove all the dead roots. If you know an area has been infected in the past, dig up and destroy all remaining plant matter.

Wait a year or two before you plant in that spot to provide enough time for any remaining roots to decompose. You can plant cover crops during this time or grasses that are not susceptible to infection.

If there are existing trees in the planting area, check for the tell-tale mushrooms growing at the base of established specimens or old stumps.

When you do plant your apple, try and keep it in optimal condition. 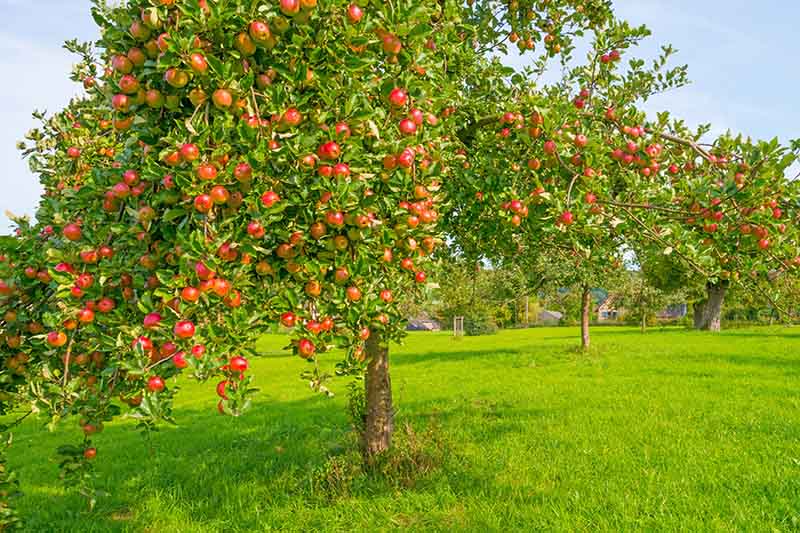 Maintain the correct soil pH, irrigation schedule, and be vigilant about other pests and disease that can compromise the health of the tree.

Drought and flooding can cause unnecessary stress and leave it susceptible to infection, as can physical damage from lawnmowers, or earth moving equipment.

How to Treat an Infected Tree

If you have multiple trees, and one becomes infected, you can try an approach recommended by the University of California Integrated Pest Management Program (IPM).

It involves digging four-foot trenches around the infected ones and then putting a plastic tarp down from the bottom to the top of the trench wall.

Then, replace the soil over the top of the tarp. The plastic provides a physical barrier to keep the disease from spreading.

The only option in the case of a severe infection is to remove any diseased trees, dig out the stump and destroy all the plant material.

The Honey Mushroom Seems Like Such a Harmless Name

Despite its common name, Armillaria is a devastating pathogen of an array of trees and shrubs and is found throughout the world.

It attacks a large variety of fruit trees. Thoroughly preparing the soil before planting can help lay the groundwork to prevent infection.

And fortunately, this pathogen usually attacks only trees that are stressed and more vulnerable, so keeping your apple trees healthy will make them more resistant.

Have you lost a tree to Armillaria root rot, or worried your orchard may have an infection? If so, let us know in the comments.

To learn more about growing apple trees, and some common diseases why not try these guides next: