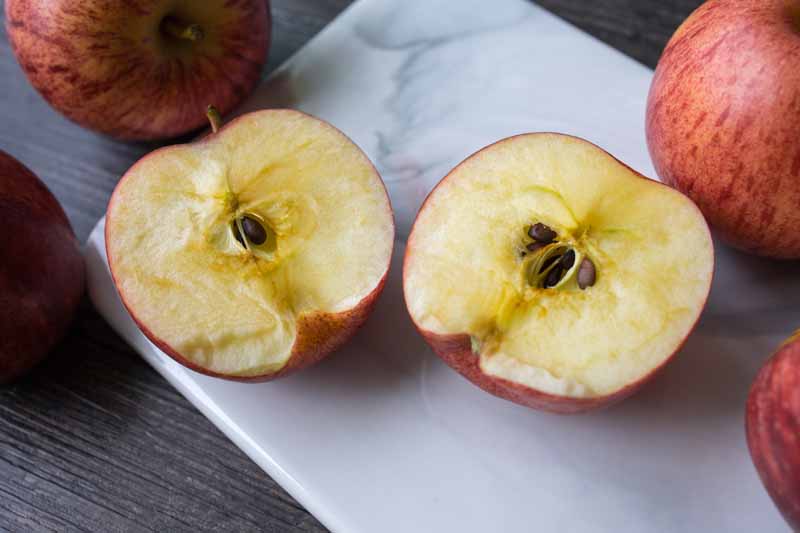 Here’s a riddle for you:

With juicy and crisp ‘Honeycrisp’ apples being in such high demand that they often fetch two to three times the price of other types, why did Bloomberg publish an article called “The Curse of the Honeycrisp Apple” in 2018?

Because this variety is so fussy! It was bred for its divine taste, not its ability to grow, store, or ship well.

In many ways, that’s a testament to its quality.

Though this is often the case with some of the best varieties of homegrown produce in terms of flavor and texture, you may need to put in a little extra effort as a gardener to get your best crop yet.

Soggy breakdown disorder is not uncommon in ‘Honeycrisp,’ and it may affect several other cold-sensitive varieties as well.

We’ll cover how to identify and prevent it in this guide.

‘Honeycrisp’ apples are prone to a variety of disorders, with one of the most heartbreaking of these being soggy breakdown.

Why is it heartbreaking? Because fruit with this disorder often look fine on the surface. The trouble’s hidden inside.

This means they survived despite the threat of a bunch of other common disorders, such as bitter pit and soft scald. (Or, maybe you’ll note symptoms of several of these together…)

But when you cut open your perfect-looking fruit, you may find brown, discolored areas under the skin that ruin it, and a less than ideal texture. The damage may be severe enough that you need to toss the fruit.

Don’t give up hope on your ‘Honeycrisp’ crop just yet, though. You may be able to avoid this fate if you store the fruit at a warmer temperature before chilling it.

We will walk you through this process, so you will have a good chance of producing and storing the tasty fruit that made you want to grow this type of tree in the first place.

Should I Worry About Soggy Breakdown Disorder?

While soggy breakdown can occur in other varieties as well – such as ‘Grimes Golden,’ ‘Golden Delicious,’ and ‘Wealthy’ – it is primarily noted as a problem today in the highly popular ‘Honeycrisp’ fruit.

This disorder manifests as discolored blotches under the skin that are often invisible on the surface.

These brown blotches will be moist, soft, and spongy.

Usually associated with low temperatures and a late harvest, this disorder has been reported in the available research in a variety of states including Pennsylvania, New York, Minnesota, Michigan, Massachusetts, and Maine.

In Canada, the disorder has been reported to manifest commonly in Ontario and Nova Scotia.

Incidence of soggy breakdown disorder is difficult to predict, and prevalence can vary between orchards, and from one tree to the next.

This condition is a physiological disorder. That means it is not caused by another organism such as a type of fungi, bacteria, or a virus, as a disease would be.

It is a problem that may be traced back not only to how the tree was grown and cared for, but often more importantly, to how the fruit were treated post-harvest.

Soggy breakdown disorder can be more severe when the fruit are harvested late, and it has also been noted in commercial or research operations when crops are light, and the fruit are unusually large.

Climatic factors play a role, too. Your fruit are more likely to manifest this disorder if the temperatures are cool, and excess moisture is available when you harvest – very similar, in fact, to the conditions you would commonly find inside a refrigerator.

However, the primary reason that apples wind up with this problem has to do with the temperatures at which the harvested fruit are stored.

This condition is known as a chilling disorder, since the low-temperature conditions that are normally best for storage actually hurt the apples in this case, leading to a decline in their quality.

At What Temperature Should Honeycrisp Apples Be Stored?

Not all apple cultivars are the same, and some types of fruit respond better to near-freezing temperatures than others.

Agricultural universities have conducted a tremendous amount of research on the best temperatures for storing ‘Honeycrisp.’ Other varieties that may suffer from soggy breakdown may respond in a similar way.

One of the most thorough studies was conducted at Cornell University, published in the New York Fruit Quarterly, and reprinted with permission by Penn State’s extension program.

Researchers found that conditioning the fruit – storing it at a warmer temperature before putting it into long-term storage – made a huge difference in the quantity of fruit affected by soggy breakdown.

Storing apples at 50°F for a week before storing them at 38°F led to 40 times less soggy breakdown disorder than what was observed in fruit that was immediately stored at 33°F.

Storing the fruit at 38°F instead of 33°F reduced the incidence of this disorder even without prior conditioning at a higher temperature, by a factor of seven.

Most apple varieties would decrease in quality during storage at warmer temperatures, however, ‘Honeycrisp’ is not most apples. This type can maintain its firmness in warmer storage.

The Problem with Conditioning

‘Honeycrisp’ fruit are likely to suffer from other types of physiological disorders, too, with bitter pit and soft scald being among the worst.

Unfortunately, storage temperatures that can lead to a dramatic drop in the incidence of soggy breakdown disorder and soft scald can cause a substantial increase in the prevalence of bitter pit.

You should check your fruit for bitter pit after a month of storage if you have a bumper crop that you hope to keep on hand throughout the winter.

One additional complication is that ‘Honeycrisp’ apples grown in different regions or under different climatic conditions may differ in their level of susceptibility to postharvest storage disorders.

Treatments that work well in one area might hurt the fruit in another.

Fortunately, experts at the University of Minnesota – the original breeder of the ‘Honeycrisp’ – provide information on the best temperatures at which to store the fruit in different locations, based on their research.

Keep in mind, however, that local climates and weather patterns are changing. What worked in one year for a given harvest may yield different results at another time.

What does all of this mean for home growers?

If you have a number of ‘Honeycrisp’ trees or another cultivar that may be susceptible to soggy breakdown, and a large harvest that you’d like to preserve fresh for the long haul, carefully fine-tuning the temperature of your refrigerated storage based on your local growing conditions can help to maintain the highest quality.

Of course, home refrigeration isn’t always the most reliable, and temperatures can fluctuate or vary throughout different portions of the appliance, and with repeated opening and closing of the door.

Unless you run a commercial operation with high-quality refrigerated storage available, you may want to consider using the extras for another purpose to avoid this condition if it’s common where you live.

You Can Grow Your Honeycrisp Apple and Eat It, Too

Not only can you grow perfect ‘Honeycrisp’ apples, you can eat them, too – fresh, and out of hand – if you keep the storage disorders at bay.

Following the recommendations for storing your harvest described above will go a long way towards preventing soggy breakdown disorder, and soft scald as well.

You will have to check the fruit to make sure that they don’t have issues with bitter pit, but there are steps you can take during the growing season to prevent this disorder.

Or maybe you’d rather eat a few right away, and just make cider with the rest.

Have you bitten into a ‘Honeycrisp’ apple only to find out that it was ruined? Or have you mastered the art of growing pristine apples? Let us know in the comments section below!

And if you enjoyed this article, give these a read next for more information that will help you to grow your best apple crop yet: