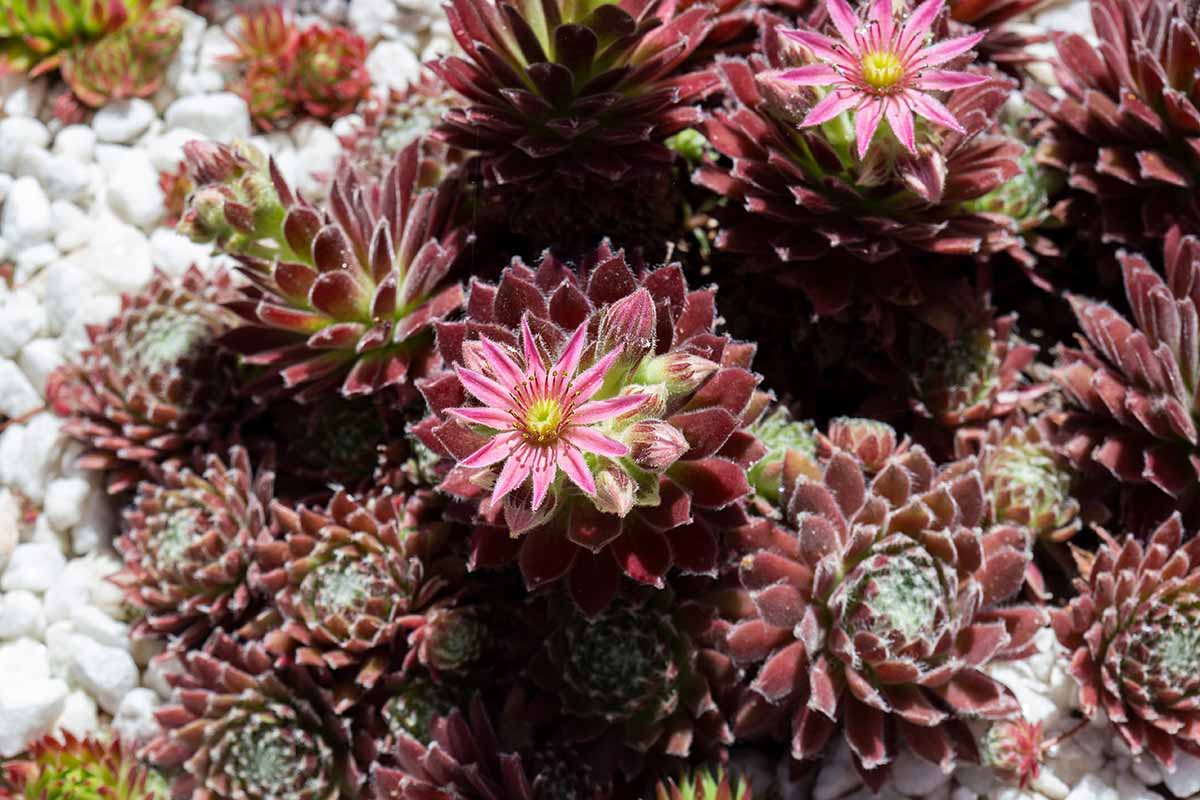 Also known as houseleeks, Sempervivum varieties nicknamed “hens and chicks” are already easy to care for, and readily produce offsets to share or add to your own garden beds, container gardens, or terrariums.

Is it too much to expect them to bloom, too?

I’m here to tell you how and when these plants flower. But fair warning: The blooms appear just once per plant, as part of its natural reproductive cycle before it reaches the end of its life.

So the thrill of anticipating a bloom is tinged with the knowledge that it heralds the plant’s death.

The full story still has a happy ending, though, so keep reading!

Do Hens and Chicks Bloom?

All Sempervivum varieties do indeed bloom, including common houseleek (S. tectorum) and cobweb houseleek (S. arachnoideum), as well as other species in the genus, hybrids, and cultivars.

Many of these are commonly cultivated as ground covers or potted specimens, and they are often called hens and chicks.

These types mostly reproduce via offsets. The mother rosette – or “hen” – produces mini-me rosettes – the “chicks” – that are attached to the parent via a stolon, or runner.

They receive nutrition via the runner until they form their own roots and attach to the soil, typically near the base of the parent. These offsets can also be removed for planting elsewhere, to propagate new specimens.

Hens and chicks usually flower only after producing several generations of offsets, after several years have passed.

But they may also flower prematurely due to environmental stress, which we’ll look at more fully a bit later in this guide. First, a little more on those flowers!

These plants produce just a single bloom at the tip of a tall flower stalk.

The blooms are star-shaped, and you’ll usually see them in shades of pink or light red, but some varieties produce flowers that are orange or white.

Each flower has six or more pointed petals and a green or yellow center that attract pollinators.

The blooms last a good long time, for up to about 30 days. After pollination occurs they give way to small, dry fruits full of even smaller seeds that you can collect to sow and start new plants.

After the blooms fade and the fruits form, the parent dies.

I admit it seems somewhat ironic to talk about how a plant named Sempervivum, which means “forever alive” in Latin, will die after it flowers.

But this particular type of succulent is monocarpic, which means it flowers only once, and then the mother plant ends its life cycle. It will live on, however, via the offsets it produces.

I’ll share more about that in a minute. First, let’s go over how you’ll know a Sempervivum is stressed, and when it’s getting ready to bloom.

Perennials that are hardy in Zones 3 to 8, houseleeks are simplicity itself to care for in rock gardens or as a ground cover.

They can tolerate sandy soil and need very little water to thrive. Sun is a must, they prefer cool nights, and they need a dormant period of cool conditions in the winter.

They also do well in containers and can overwinter as houseplants indoors, though they grow best outdoors year-round in suitable zones.

Nonetheless, they can still become stressed and flower prematurely, dying soon after.

What situations make the hen feel the need to flower and produce seeds?

The first is overcrowding. While a thick blanket of rosettes is visually appealing, especially in rocky areas or atop areas of hard, compacted earth, these succulents need to be spaced at least four inches apart to give them enough room to produce chicks via stolons.

If space gets too tight, they may resort to forming flowers that will produce seeds for reproduction instead.

Other adverse conditions in their environment can have an effect as well. If they experience a big change in the usual light exposure, for example, they may respond by flowering.

So consider that if you’re removing a nearby tree that usually offers respite from the afternoon sun in a climate that’s maybe a little too warm for them to tolerate.

An overabundance of water may cause them to bloom. And even though they’re drought resistant, if they suddenly experience prolonged drought, the parent rosettes may start to send up those stalks.

Big temperature shifts can also initiate flowering. If they’re growing in containers, you can move them inside for a spell, but there’s little you can do to stop the bloom cycle once a heat wave or harsh freeze has affected the hen.

If you don’t wish for your plants to flower prematurely, be sure to prevent overcrowding and oversaturation, water as needed, and protect them from extreme temperatures they aren’t able to tolerate.

Only grow in well-draining soil, and be prepared to move potted specimens to shade or bring them indoors if extreme weather is in the forecast, or if attempting to grow them outdoors beyond their ideal range.

If you anticipate flowering from such stresses, you can take steps to propagate a few extra plants from the parent as needed when the time comes.

Signs Blooms Are on the Way

Do you have a budding houseleek on your hands?

Once you know what to look for, it’s pretty easy to spot a Sempervivum that’s about to bloom.

Before it flowers, the leaves of the parent rosette, aka the hen, will begin to close in on themselves.

Then the rosette will begin to elongate, producing a scaly flower stalk that can reach 10 inches tall.

At the same time, the base rosette will often start to tilt to one side.

It’s an impressive sight, but also a cue to make sure to take cuttings if you don’t have offsets available at the base of the parent plant. This propagation method isn’t nearly as foolproof as transplanting rooted offsets, but you may be successful.

Also, take a few minutes to make sure those chicks around the base of the hen that’s begun its flowering cycle have established roots.

If they don’t have any roots of their own, they will languish with the parent plant since she is responsible for providing nutrients via the stolon until they can grow independently. Larger offsets are more likely to be ready for transplant.

How to Keep Your Plants Going After Blooming

It’s dismaying that blooming foreshadows the end for a Sempervivum plant. But you can take comfort in knowing this type of succulent, named for its habit of producing “chicks” from the parent “hen,” can live on via these offsets.

You’ll need to give them a little encouragement, though, especially if the plant is blooming because it’s stressed, not just as part of the natural aging process.

Be sure to remove and transplant at least a few of the offsets if they’ve produced roots. These are also sometimes called “pups.”

You’ll find them surrounding the mature parent Sempervivum. Snip the stolons and get those rooted mini rosettes into their own containers or suitable spots in the garden quickly so they can grow on.

And remember – if extreme conditions have prompted the mature hen to focus her energies on flowering, pick a location where her babies are sure to thrive, or pot up and wait to transplant outdoors until conditions improve.

If pups ready for planting aren’t available you may need to take cuttings, by severing either leaves or rosettes that are attached to leggy stems.

Like other succulents, Sempervivum is unusual in comparison to other types of common garden plants in that you allow cuttings to dry out and callus over at the cut end so they’ll form roots.

Learn about propagating succulents in five easy steps in our guide.

After you’ve finished taking what you need to propagate new plants, when flowering is complete, you can either wait to collect seeds or go ahead and remove the mother from the garden or container.

A Flowery End for Sempervivum Succulents

I can’t be the only one who thinks Sempervivum blooms resemble the feathered top-knots of some of those exotic hen breeds that urban farmers, 4-H exhibitors, and avian pet owners raise.

Maybe I’m being overly fanciful about the name hens and chicks, but those unexpected, bright pink blossoms fuel my imagination.

The forming buds also inspire me to get moving if I haven’t separated offshoots recently.

Being able to share starts readily or use them to expand your own holdings is a major part of the appeal of growing any type of succulent.

Have you ever tended a hens and chicks plant that bloomed? Please share your photos and tell us about your experience in the comment section below, and let us know if you have any questions we can help with.

And if you’re looking for more succulent growing do’s and don’ts, read these guides next: 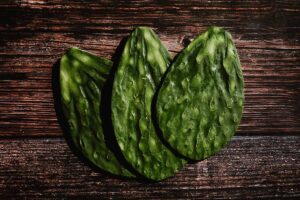 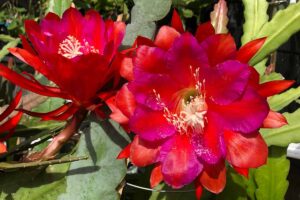 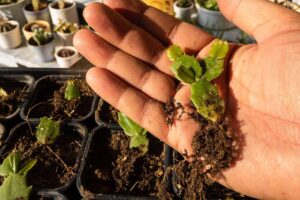 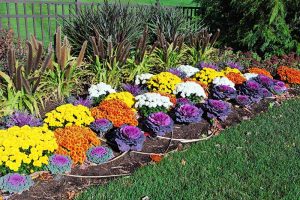 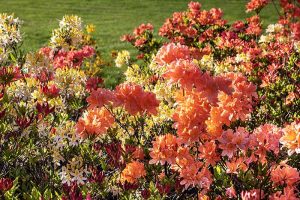