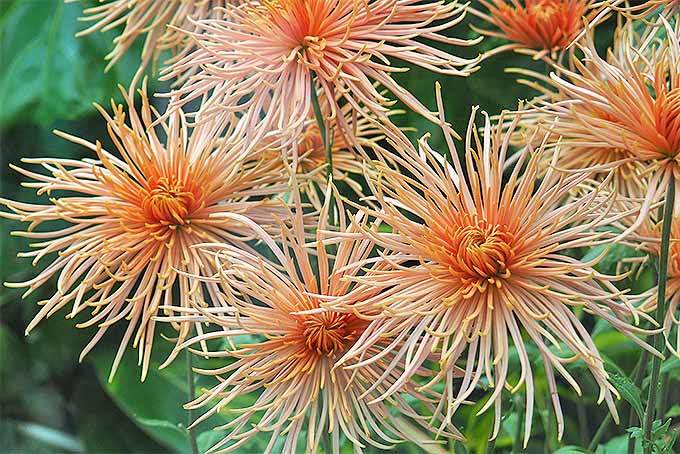 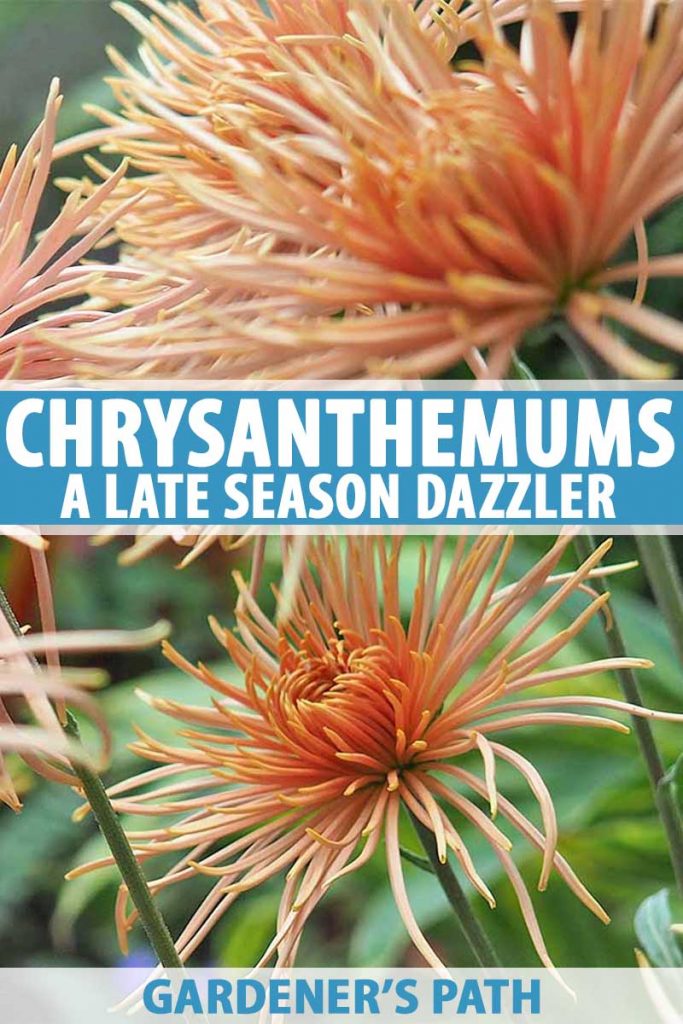 November’s flower is the delightful chrysanthemum, an easily grown herbaceous perennial that adds a lovely splash of warmth to the cool autumn garden. These late-season flowers can handle a light touch of frost, and colors often deepen and improve with cold weather!

Often referred to as “mums,” they received their Western name from Swedish botanist Karl Linnaeus, who compounded the Greek words for “gold” (chrysos) and “flower” (anthemon) to describe their luminous beauty.

Native to northeastern Europe and Asia, the colors of wild species are typical of an autumn palette, in hues of red, white, and yellow.

But with over 30 species and innumerable hybrids and cultivars, today’s selections are available in a vast assortment of tertiary shades, including earth tones, mauve, maroon, orange, and pink.

The genus is split into two primary groups, known as “garden hardy” and “exhibition.”

The garden hardy group are the ones that can be overwintered in temperate regions, and this is the group we’re exploring in this article.

Exhibition types are gorgeous, but of a delicate nature. They require a good deal of attention and special environments to produce flowers worthy of garden shows – beautiful, but a lot of work! 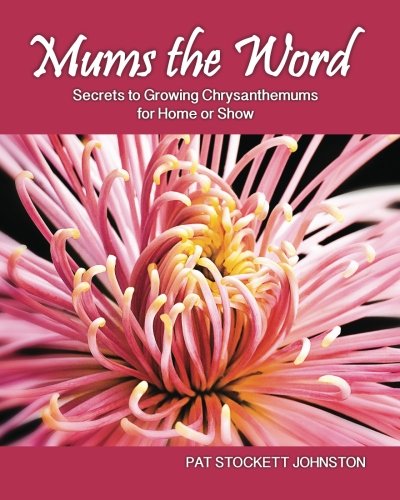 Mums the Word: Secrets to Growing Chrysanthemums for Home or Show

But, if you are interested in growing show flowers, study up first with a good reference book. Pat Johnston’s book Mums the Word: Secrets to Growing Chrysanthemums for Home or Show is a good place to begin this rewarding hobby, and is available on Amazon.

Mums have several growth habits, ranging in size from small dwarf varieties to jumbo, shrub-sized specimens. The leaves are arranged alternately, and have both toothed and smooth edges.

One of the prettiest perennials, some varieties like the painted daisy will bloom in mid-summer, but the majority begin flowering in late summer and bloom through mid-autumn.

The first known cultivation of chrysanthemums dates to the fifteenth century in China. At that time, the beautiful symmetry of their petals was held in such high esteem that only the nobility could have them in their gardens.

Over the years, the rules relaxed, allowing all to enjoy their beauty. And they become an important symbol in Eastern art and festivals.

Confucius reportedly suggested meditating on the perfection of the mum’s unfolding petals, which some believe to be the inspiration for The Four Gentlemen.

The chrysanthemum is the third of the Four Gentlemen in Chinese ink and wash paintings – floral subjects used to denote the seasons, with each plant having characteristics relative to human traits. The other three gents are orchids for spring, bamboo for summer, and plum blossoms for winter.

In eighth century Japan, the chrysanthemum came to represent the sun and became part of the emperor’s royal standard. It’s also revered in the annual Happiness Festival in Japan, and symbolizes long life and happiness.

Today, a stylized version is still found on the front of the Japanese passport, as well as some of their paper currency. 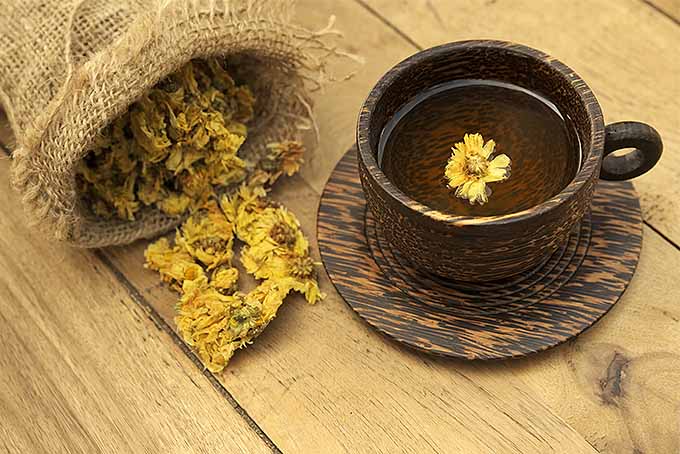 In many parts of Asia, the white and yellow petals of C. morifolium are steeped to make tea, and in Korea the rice wine known as gukhwaju is flavored with chrysanthemum flowers.

They were first introduced to Europe in the mid-1700s, and made their way to North America at the end of the eighteenth century.

Given the right conditions and just a bit of TLC, the Queen of the Fall Garden will provide many years of colorful enjoyment, either directly in the garden or in containers.

They’re not fussy about soil conditions, preferring a slightly acidic to neutral soil. But they do abhor wet feet, making good drainage a must.

Plenty of sunshine is also important, as too much shade will result in leggy growth with few buds. A minimum of three hours per day is needed for healthy growth, but for best results, a full six hours is ideal.

Before planting, improve the soil by working in a couple of inches of compost or well-rotted manure along with a sprinkle of bone meal, like this all-natural fertilizer from Dr. Earth that’s available on Amazon. And towards the end of June, top dress with a complete fertilizer such as 5-10-10 or 5-10-5 to encourage overall growth.

Plants taken from basal cuttings or divisions should be planted in the spring after the last frost, and mature plants purchased from nursery stock can go in the ground from spring through early autumn – with the following caveat:

Late-flowering mums planted in the fall often fail to survive the winter. With all their energy going into flower production and naturally shallow roots, they simply don’t have the time to form a strong root system – without which, they can’t handle freeze and thaw cycles.

For these late-bloomers, you might have better success overwintering them in a cool, dry, and sheltered spot that doesn’t freeze.

Cut back the foliage before tucking them away, cover with a dry mulch, and water lightly to keep the soil just moist until warmer temperatures arrive. Gradually move them into the garden as the days grow longer to harden them off, and plant once the danger of frost is past.

Some cultivars are available for propagation by seed, and new plants can be grown from division or basal cuttings. To learn about root division, see our Complete Guide to Dividing Perennials.

As mums seem to prefer growing on new roots, basal cuttings are often the most successful method for plant propagation.

In late winter, choose several strong, new shoots growing from the crown of your plant. Scrape away some of the soil to ensure your cut (made with a sharp, clean knife) is as close to the crown as possible, then gently pot up in a light, loamy soil. 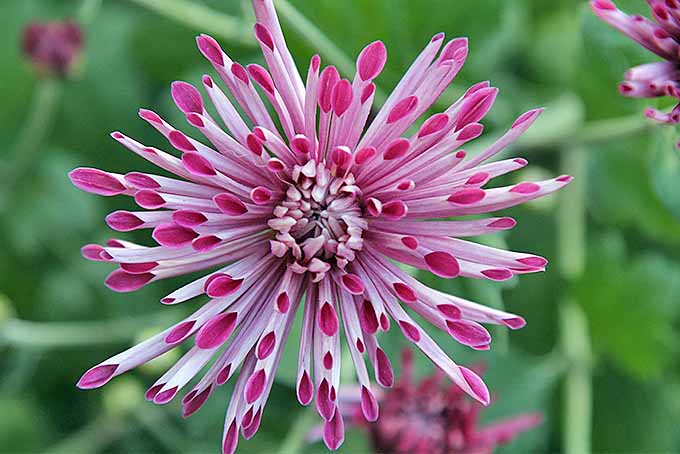 Pinch out the tops, water gently and regularly, and cover with a cloche or plastic bag. Place in a cold frame or sheltered spot until roots have formed, and plant in spring once warm temperatures arrive.

Dwarf mums are best situated at the front of garden beds, as borders, and in containers, while mid-sized and large species are good in mixed beds or as stand-alone specimens.

Established plants are hardy in Zones 3-9, but will appreciate some winter care. Before the cold weather sets in, cut back after flowering to six inches and cover with a coarse mulch to provide insulation against the winter cold.

To maintain a compact shape, mums will need to be pinched or pruned regularly.

The breeders of many new cultivars claim pinching isn’t required, but personally, I find this traditional method produces bushier plants with more blossoms – particularly after their first year of growth.

In late winter, once the new growth reaches a height of 6-8 inches, pinch or trim off the top inch of each stem – this will produce new side branches.

When the new side branches have grown to 6 inches, pinch or trim all stems again by 1 inch. Continue pinching in this manner until mid-June for early flowering varieties, and until mid-July for those that flower in September and October.

For direct sowing, packets of 50 seeds for the lovely white and yellow ‘Popcorn’ mum are available from My Secret Gardens on Amazon.com.

Plant this cheerful variety indoors and transplant to the garden once danger of frost has passed. Cut spent flowers back to encourage a second flush of blooms. 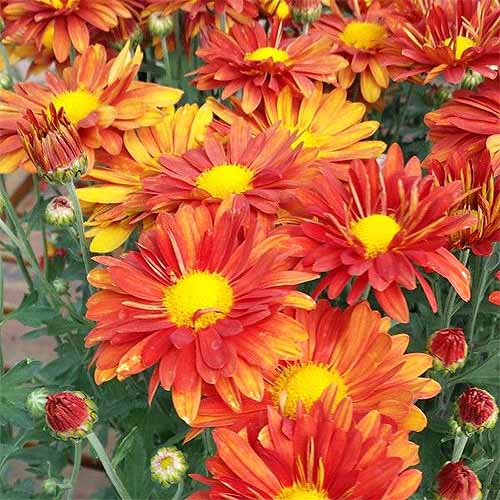 With a height of 3 to 4 feet, this specimen is a vigorous grower and resplendent with semi-double ray florets.

Deer resistant and generally trouble-free, there are still a few pests to watch for, mostly fungi.

A fungus that appears first as small yellow spots, infected areas darken to black as they grow.

Remove and destroy any infected leaves, and keep the growing area clean of garden debris where the spores like to overwinter.

A layer of mulch will help to prevent spores from reaching lower leaves, and overhead watering should be avoided to prevent splashing spores onto leaves.

Remove infected leaves, ensure plants have good air circulation, and avoid getting water on the leaves.

If rust is a common problem in your garden, select rust-resistant varieties such as ‘Achievement,’ ‘Mandalay,’ and ‘Orange Bowl.’

Powdery mildew is a result of infection by the fungus Erysiphe cichoracearum, in which leaves become covered with a pale gray powdery coating caused by an excessively moist environment.

Whatever style of mums you enjoy, they make a spectacular splash of autumn color to finish up the growing season.

Give them plenty of sunshine, excellent drainage, and all-purpose fertilizer as summer begins, then pinch vigorously for compact growth and a showy display of flowers.

And for those late bloomers, remember to overwinter in a sheltered spot before planting out in the spring.

Do you folks have a favorite variety of mums to recommend, or any questions you’d like addressed? Drop us a line in the comments below. 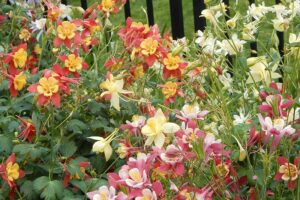 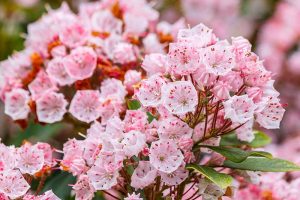 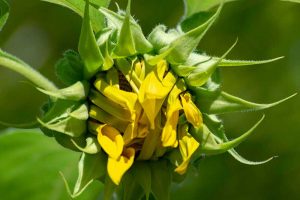 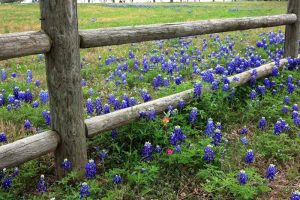 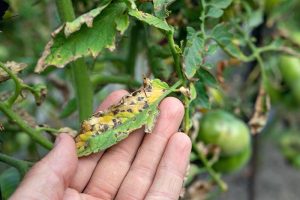