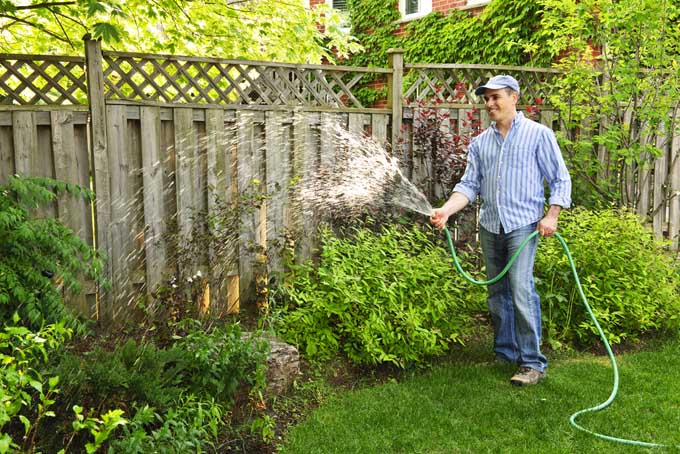 My parents are still using the same four garden hoses they bought back in ’60s. Unlike their daughter, my parents really know how to extend the life of their garden tools.

I’m quite a bit more careless then they are. I fold over the ends of the hoses when switching out sprinkler heads, drag them across the street where they can be run over by cars, coil them up on sawbucks, and leave them outside all winter long where they’ll freeze.

It should come as no surprise then, that at our place, garden hoses last less than a couple of years before ending up in the trash can.

For those of us with old upright vacuum cleaners, we learned from our mothers that the way to prevent wear and tear on the cord was to wrap it with a figure eight from handle to base.

When coiling up a garden hose, using the same type of figure eight wrap will prevent the tube from permanently developing a kink to the left or the right. Over time, kinks in the line eventually turn into holes.

Kinks aren’t only caused by improper coiling, but also by folding the lines in half when changing out sprinkler heads. Since I water from a central well, this lazy way of kinking the end saves me multiple trips when I need to irrigate.

Unfortunately, over time that fold will eventually split and then must be repaired. Avoid the temptation to kink the tubing at the end, and always turn the water on or off by using the faucet.

If watering from a central well, consider investing in a few quick change adapters to save endless trips back and forth across the yard. Adapters easily attach to nozzle ends and sprinkler heads, and pop apart when it’s time to change sprinklers.

They also have a baffle inside of them that shut off the flow of water, making the task of switching out sprinklers a snap.

I’d really suggest springing for the brass made adaptors such as the ones made by nelson as they tend to last much longer and I haven’t had good luck with the plastic ones – they tend to last a couple of weeks to several months before developing issues. 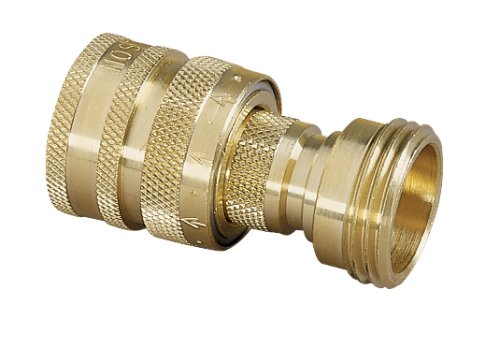 Over time, the ultra violet rays of the sun can also damage and disintegrate a garden hose. A sun damaged tube can develop kinks and bulged areas that look like a snake swallowing an orange.

My dad always kept them under cover when not in use, by placing them beneath a small, disc shape platform. The cover doesn’t have to be anything special, but must provide a total sun block.

However, I believe in form following function and I like to purchase a holder, such as a reel or pot that can camouflage them – the  CobraCo Bird Motifi  product shown below is my current favorite and the one I use at home. 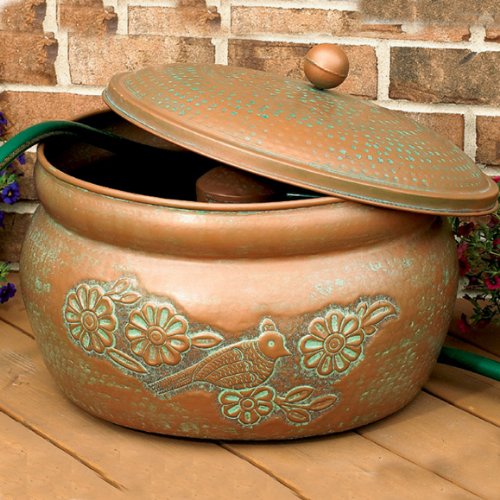 Freezing temperatures are also hard on any water line. Before putting a hose away for the winter, remember to drain any water remaining inside.

And, instead of hanging it on the wall of the garage, use that figure eight coil described earlier and set it out of the way on the floor.

One more common sense way to extend the life is by not running over it with a car. Once those fittings have been smashed, they will leak and can no longer be attached to other fittings.

If you must bring a garden hose to the street for whatever reason, take care to place the connections where they will not be flattened by traffic.

Near the sprinkler section of your favorite home improvement store, you may have notices a small shelf filled with hose repair components. No matter how badly they have been mangled, there’s a kit to repair the damage.

Repair kits usually cost less than a few dollars, and needs nothing more than a screwdriver and a sharp knife. Repair is far less expensive than buying a new one, and when done properly, will extend the life by many years.

Again, don’t cheap out here. Get a good kit made of aluminum or brass rather than cheap plastic. I prefer the Orbit brand for this. Also, make sure you order the correct one for your hose size – 1/2″ or 5/8″ (most common). 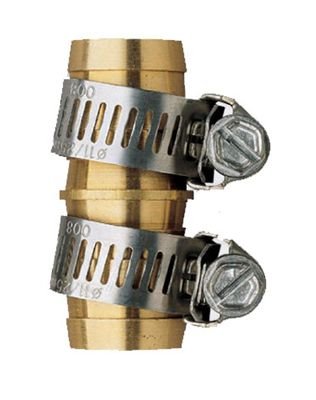 With a quality example costing nearly $25 per 50 foot section, it makes economic sense to take care of ones you already own. Using your hoses properly and paying attention to how they are stored and coiled are simple tasks that can save significant amounts of money over time.

And should you find yourself in the position of need a new one, be sure to check out our garden hose buying guide. 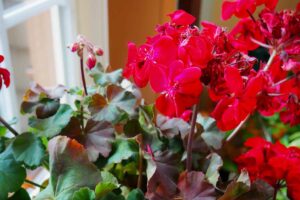 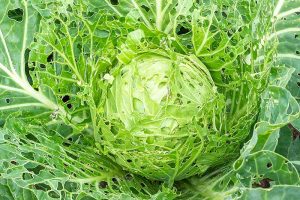