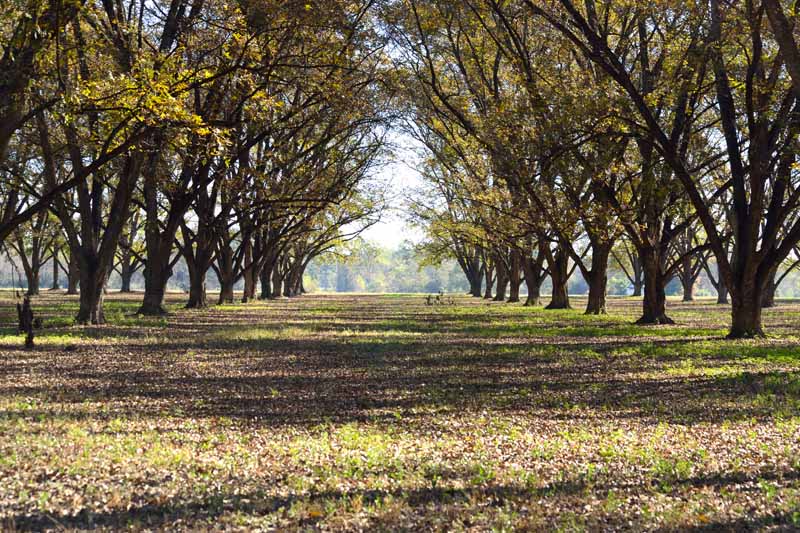 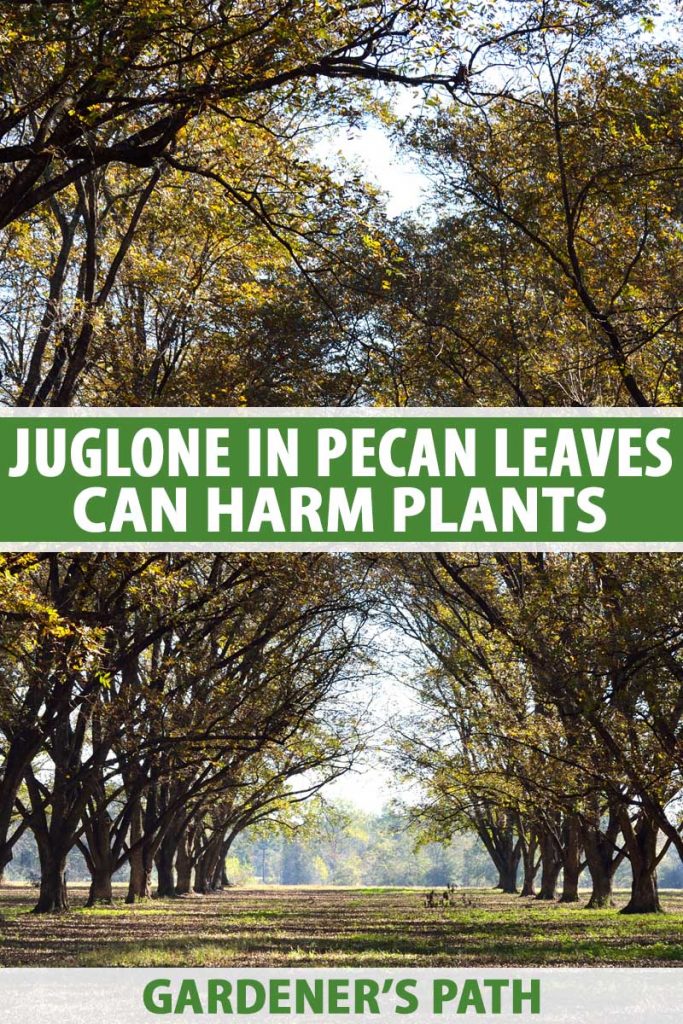 You may know that many plants don’t grow well – or at all – under walnut trees. This fact has been observed and documented since the first century AD.

But what about pecan trees? Do they have the same effect?

They are members of the same family as walnuts (Juglandaceae), although that doesn’t necessarily mean that they have the same chemical properties.

Think about the Solanaceae family. Edible plants like tomatoes, eggplants, peppers, and potatoes, and the highly toxic deadly nightshade, are all in the same family.

But yes, pecans can also inhibit the growth of other plants in the vicinity to the extent that you should avoid planting certain species under or near pecan trees.

Why Do Plants Die When They Live Under Pecan Trees?

They die because they are being poisoned!

Both pecans and walnuts produce a family of closely related toxic chemicals. The parent compound is called juglone – or 5-hydroxy-1,4-napthoquinone to be precise.

And there is a reason to be technical.

Focus on the quinone in that name. Quinone is a highly reactive compound that can be dangerous in the presence of oxygen.

So dangerous, in fact, that small amounts can kill a person.

Juglone acts like cyanide and is poisonous to animals, plants, and microbes.

But don’t worry! The leaves, nuts, and roots do not contain high enough concentrations to kill us.

Why Do These Plants Make a Poison?

Producing a chemical that inhibits the growth of another plant is known as allelopathy – the poisoning of one plant by another.

The idea is that both pecans and walnuts will have less competition from other plants if they produce a substance that kills them.

However, another reason could be to protect themselves against microbial pathogens. There has been quite a lot of research on the effects of juglone against fungi that cause disease on these trees.

The compound is clearly toxic to many of these fungi, but whether it protects against disease has not yet been definitively proven.

Why Don’t Pecan Trees Die From This Toxin?

Juglone is as toxic to pecan trees as it is to any other plant. However, the plants that create it are able to modify it and keep a less toxic form in their cells.

This modified juglone is called hydrojuglone. It is juglone with an -OH group attached to it.

It is no longer a nasty oxidizer, and the plants containing it are safe.

A classic way to see the difference between juglone and its less toxic form is to look at the colors of the nut when you cut a husk open.

Hydrojuglone is clear, while juglone is dark reddish-brown.

The husk will initially be green, and then you can see it turn brown as the oxygen in the air changes the chemical back to the juglone parent.

There is also hydrojuglone glucoside (HJG) – a fancy way of saying that the hydrojuglone has a sugar molecule (glucose) bound to it.

This makes the chemical even more stable, although it serves as a reservoir if the juglone is needed.

How Does This Affect My Garden?

The studies that have been conducted thus far show mixed results as to whether plants are safe growing under pecans. Some claim that pecans produce juglone at a much lower concentration than black walnut, so it’s less of a threat.

However, research has shown that in some cases the pecan actually has higher levels of juglone than walnut.

Some of this discrepancy may be due to the substantial difference in the production of these chemicals in different pecan cultivars.

Some cultivars are more likely to kill your nearby plants than others.

For example, the cultivar ‘Cape Fear’ has a low concentration of both juglone and hydrojuglone, and therefore should have little effect on the plants under it.

Juglone was not detected in up to seven sampling times for the cultivar ‘Pawnee,’ and ‘Desirable’ also had the lowest HJG concentration at all the time periods measured.

Some plants are particularly susceptible to this chemical. Tomatoes, apples, and azaleas are notorious for their sensitivity.

You might not realize what the problem is at first. The plants may wilt, and have yellow leaves and stunted growth before dying. There is no cure once the plants have been poisoned.

Avoid Planting Near a Pecan or Walnut Tree

It’s not just planting under the trees that can be a problem. The roots also contain the chemical, so you need to avoid growing sensitive plants in a wide area around the tree – 50-60 feet in the case of walnuts.

Even if you remove the tree, the roots will still release toxins as they decay, so you may have to wait a year or more before you can grow sensitive plants in that area.

Some older research studies suggest that the roots of pecan trees contain fewer toxins than those of walnut trees, so you may be able to plant closer to a pecan tree.

What Can I Plant Under a Pecan Tree?

Most of the advice on what plants will grow in the presence of juglone comes from studies on walnuts, but this can be extrapolated for pecans as well. 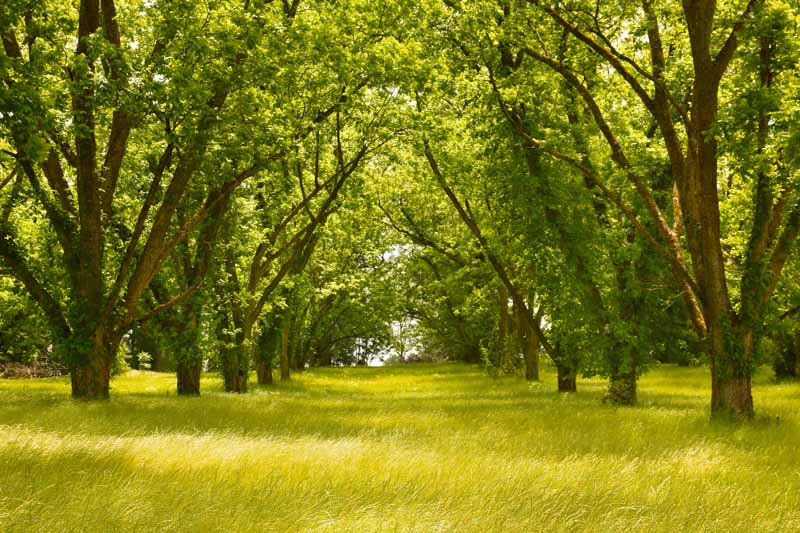 Some of the more common trees that have resistance include: maples, buckeyes, birches, hickories, elms, and oaks.

Many understory and forest-edge shrubs are also resistant. Some of the more common species include: dogwood, rose of Sharon, hydrangea, sumac, currants, raspberries, blackberries, elderberries, and viburnums.

Many flowers, vines, and evergreens are resistant to juglone as well. We’ll provide a full list in a follow-up guide (coming soon!).

Plants are Not Out to Get Us!

Many of us tend to view nature as benign. But the natural world is rife with competition.

Since plants cannot run away, they typically use chemicals to defend themselves from predators like insects or deer, microbes, and even from other plants. 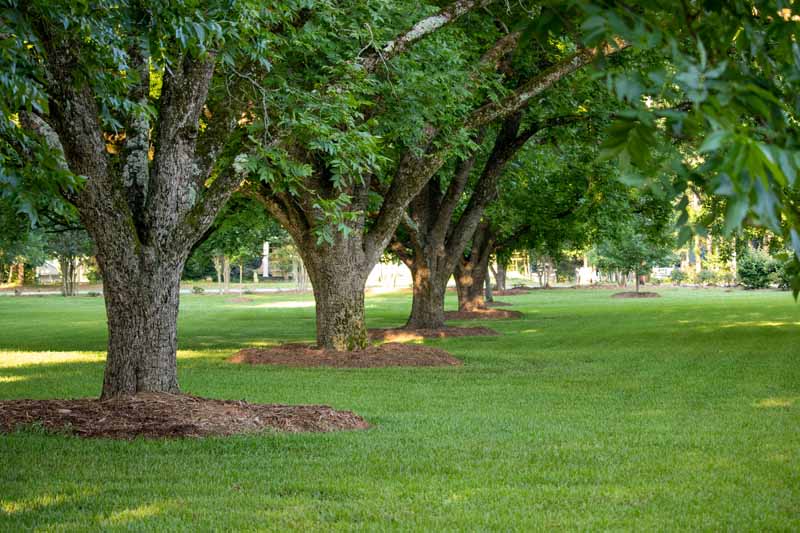 Far from being a safe haven, nature produces some incredibly powerful toxins.

There is no evidence that plants are plotting against us – yet. But it’s certainly helpful to the gardener to know which plants may produce these chemicals that inhibit the growth of others, when we plan our gardens.

Have you had good or bad luck planting under pecan trees? If so, please share your experience in the comments below.

And for more information about growing pecan trees, you’ll need these guides next:

One of Helga George’s greatest childhood joys was reading about rare and greenhouse plants that would not grow in Delaware. Now that she lives near Santa Barbara, California, she is delighted that many of these grow right outside! Fascinated by the childhood discovery that plants make chemicals to defend themselves, Helga embarked on further academic study and obtained two degrees, studying plant diseases as a plant pathology major. She holds a BS in agriculture from Cornell University, and an MS from the University of Massachusetts Amherst. Helga then returned to Cornell to obtain a PhD, studying one of the model systems of plant defense. She transitioned to full-time writing in 2009.
More Posts
Subscribe
3 Comments
Oldest
Newest Most Voted
Inline Feedbacks
View all comments 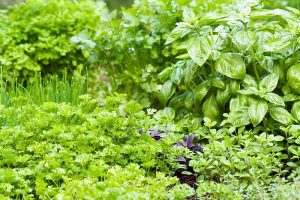 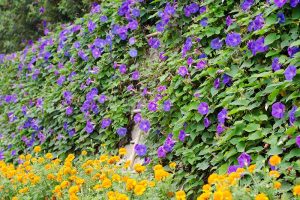