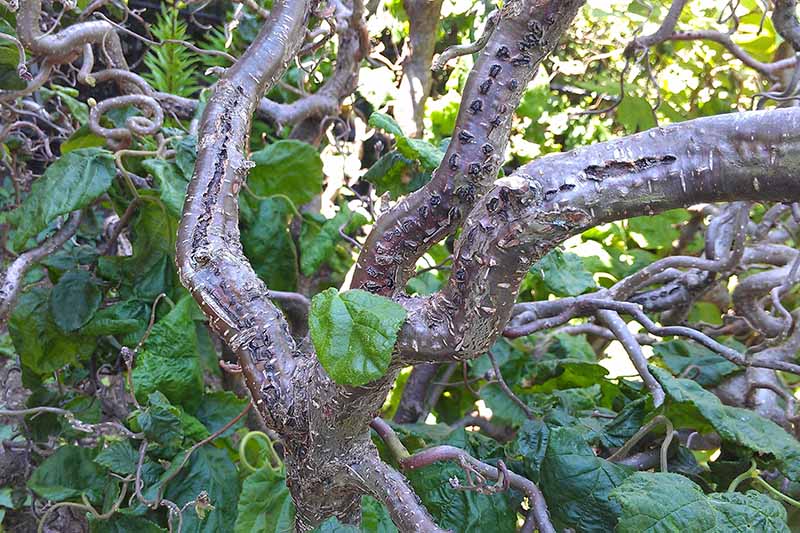 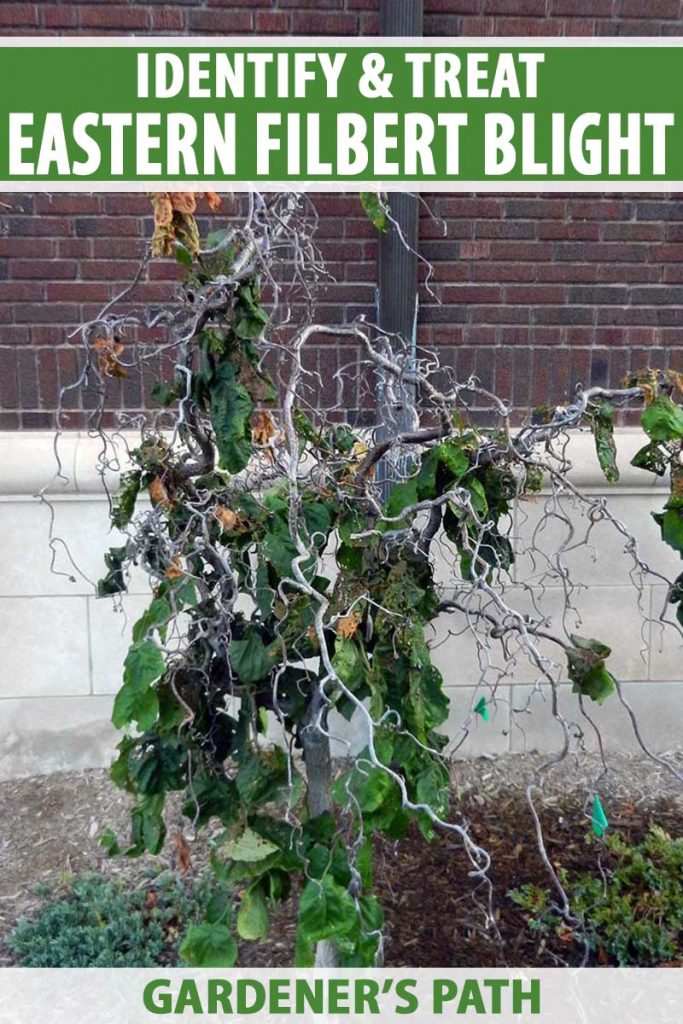 Hazelnuts have been considered divine for ages. We can trace this history back to their mention in a 2838 BC Chinese manuscript as a sacred nourishment bestowed by God.

Currently, commercial groves of these tasty nuts are under siege from an aggressive fungal disease commonly known as Eastern filbert blight.

In case you aren’t already familiar, filbert is an older name for the hazelnut that is still commonly used in the Northwest.

The fungus that causes this blight, Anisogramma anomala, is considered the worst pathogen to plague hazelnut orchards. If it’s not controlled, it rapidly spreads from tree to tree, and orchard to orchard.

There is no cure for this disease, and it can kill all parts of the tree except the roots.

In addition, the disease has a 12- to 15-month lag time before symptoms manifest.

Read on to learn how to protect your hazelnuts from a potential onslaught.

How to Control Eastern Filbert Blight in Hazelnut Trees

There are three different species of hazelnut commonly grown in the US: native American species, Corylus americana, the filbert C. maxima, and the European species, C. avellana. 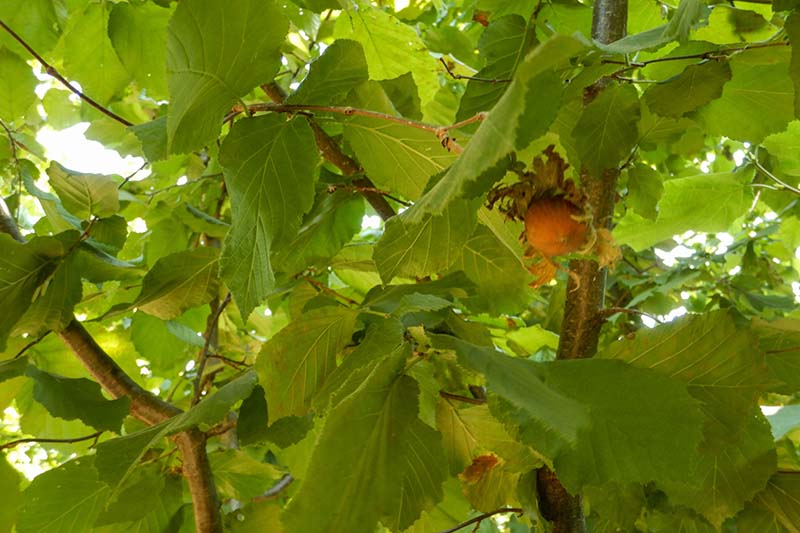 High-end hazelnuts of the European variety typically fetch the highest prices, and these are often grown commercially in the Pacific Northwest. These trees don’t tolerate cold as well as the American species.

So, why grow them?

The nuts that they produce are larger and generally considered tastier, and the trees have been bred to perfection for centuries if not thousands of years. This is the type that is commonly used in chocolate confections and it fetches the highest prices.

And then there are the hazelnut trees native to North America – from Canada all the way down to Georgia and Louisiana.

These nuts don’t meet the rarefied standards of the European ones, but the hazelnuts they produce are tasty nonetheless, and they are easy to grow.

Most importantly, the American species tends to be resistant to Eastern filbert blight (EFB), a disease that has done its best to ravish the commercial groves in Oregon and Washington.

If you are growing the European species at home, this can be a problem for you too.

The Encroachment of Eastern Filbert Blight into the Pacific Northwest

The soils and climate of Oregon and Washington State are ideally suited to European hazelnuts, which have been grown there since the mid-1800s.

In particular, Oregon’s Willamette Valley is a haven for these trees and produces more than 99 percent of the country’s hazelnuts. It’s a dream location for growing hazelnuts, with its Mediterranean climate near the ocean.

In addition to ideal soils and temperatures, another plus for this location is that the nuts were grown thousands of miles away from the dreaded EFB – for nearly a century, that is.

However, pathogens do not respect geographical boundaries, and the disease was discovered in Washington State in the 1960s. By 1998, it had spread to the Willamette Valley.

How can you determine if your trees are infected with this blight?

Branches may suddenly die, from July through September.

More subtle signs are collapsed areas of bark on the trunk or stems, known as cankers. You will see them first on new twigs.

According to Kaitlin Morey Gold of the University of Madison Plant Pathology Department, the trees may not develop any cankers.

If they do, the cankers expand slowly and may cause the loss of occasional branches.

However, it’s another story for European hazelnuts. The cankers will keep growing – up to three feet per year – and can form deep gouges or grooves over time, typically killing an infected tree or shrub within five to 10 years.

Another symptom is the fungal structure that produces the spores – a stroma, or multiple stromata.

The fungus produces these black football-shaped structures within the cankers. The stromata are slightly raised above the branches.

How the Disease Spreads

The spores from the stromata can be splashed by water or blown by wind. People can also spread the disease on their clothes, hands, and gardening tools, or by transporting wood from infected plants.

This fungus is unusual because it doesn’t infect plants through existing wounds. Instead, it infects immature tissue on leaves and stems that are actively growing.

The cankers will not become visible until 12-18 months after infection.

Inspect Your Trees Every Six Months

If you are growing European cultivars, it is imperative that you scout for this disease at least twice a year.

The fungus has a life cycle of two or more years, and your trees are likely to show symptoms within the first two years after planting.

Being able to contain the disease is more likely if you catch it early. If you fail to notice symptoms early on, your orchard may quickly go from having a single canker to hundreds of them.

This process entails examining your trees for cankers and taking action if you find them.

If there are only a few cankers, you can try pruning off the infected tissue. Cut two to three feet below each canker.

Be sure to disinfect your tools after each cut. Dip them in 70 percent alcohol or 10 percent bleach and then let them dry.

If you do not remove the diseased limbs, the whole canopy is likely to die within seven to 15 years after the first sign of infection.

If your tree is covered in cankers, be ruthless and remove it. If you don’t, the fungus will keep producing spores, and this will cause new infections in nearby trees.

Burn your infected tree if this is permissible in your area. Otherwise, you should bury it deep in the ground or cut it into chips and let them dry to kill the fungus.

How to Prevent Infection

Fortunately, there are steps you can take to prevent infection if you are growing European cultivars:

‘Barcelona,’ a high-yielding and vigorous cultivar, was once the primary variety grown in 60-70 percent of orchards in the Pacific Northwest.

It produces medium to large round nuts, with excellent flavor. 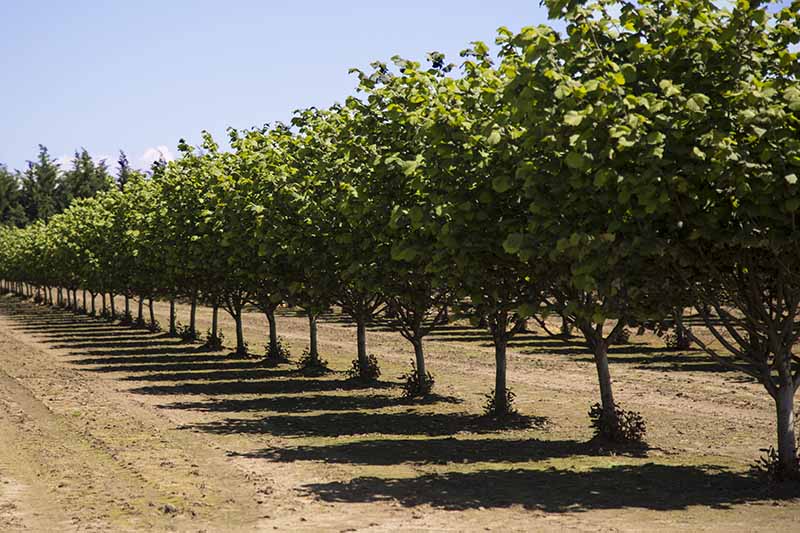 What’s its downside? It is only moderately resistant to EFB. This feature has resulted in more limited commercial planting in recent years.

As of 2017, the percentage of ‘Barcelona’ hazelnuts that were planted in Oregon had dropped by half.

Other varieties are being planted today that have more resistance to EFB, according to the Hazelnut Growers of Oregon.

With support from the hazelnut industry, Oregon State University (OSU) has been breeding hazelnuts since 2007 to develop new cultivars to replace ‘Barcelona.’

Recent cultivars produced by Dr. Shawn Mehlenbacher and his team at OSU include ‘PollyO,’ ‘Yamhill,’ ‘Wepster,’ ‘Jefferson,’ and ‘Dorris.’

‘PollyO,’ named after industry stalwart Polly Owen, produces nuts that are suitable for use in chocolate and baked goods.

While these cultivars can still get cankers, this will occur infrequently if a tree is infected, and the cankers may not produce spores.

Unfortunately, there are strains of the fungus that can overcome the gene resistance in these varieties.

If you want to grow hazelnuts on the East Coast, you are better off sticking with the local species, C. americana, rather than growing the resistant cultivars that are popular on the West Coast.

The State of Oregon does its best to keep the disease out by restricting the cultivars that can be imported from other states.

If you are growing just a few hazelnut trees, you can just plant two or three of the same cultivar, so they will pollinate each other.

However, if you plan on growing an orchard, you should consider adding different cultivars to your repertoire – and you need to make sure these are resistant to the disease.

These trees have similar bloom times, and they make good partners for promoting high yields.

Suckers that sprout from the base of the stem are usually pruned out anyway, so that energy will be focused into the main stem or “leader.”

However, if you need an additional incentive to prune them, suckers can also be sources of spores that can spread to other trees.

While suckers can be pruned in the summer, spring is the perfect time to do so, because you can prune them while they are small and before they harden off.

While there is no cure for Eastern filbert blight, fungicide treatments can protect against new  infections if applied properly.

You will need to apply a fungicide four times per season to adequately protect your trees, starting at budbreak. Be sure to thoroughly cover all of the branches.

You should treat resistant cultivars as well, in the first spring after planting.

Start when the buds begin to swell, and spray every two weeks for a total of four treatments over the course of eight weeks.

Make sure to alternate or mix fungicides with different modes of action. 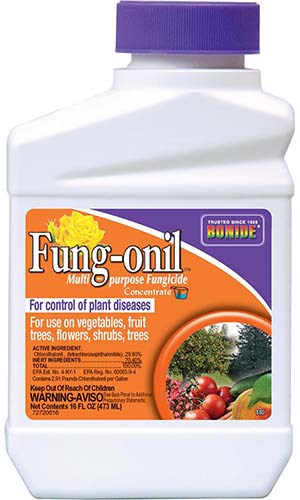 As described by George Plaven in 2018 in an article in the Capital Press, a detailed study on the use of fungicides in commercial hazelnut orchards found that their use could net growers an extra $4,274 an acre.

This study bodes well for home gardeners, since they should also have the potential for much higher yields after using fungicides to treat the infection.

And more importantly – their use bought time for researchers to develop resistant cultivars, thus saving the industry.

There Is Hope for Hazelnut Growers

Fortunately, the American hazelnut cultivars grown on the East Coast can live in harmony with Eastern filbert blight.

If only that were the case for the prized European cultivars grown on the West Coast… It was dire news indeed when EFB was discovered in Washington and then Oregon in the last century.

However, the combination of fungicides and new resistant cultivars available today has greatly improved the odds of success for growing these delectable and highly sought after nuts.

Do you have a horror story to share about Eastern filbert blight, or a tale of redemption? Either way, let us know in the comments.

And read on to learn more about diseases of nut trees in these articles:

One of Helga George’s greatest childhood joys was reading about rare and greenhouse plants that would not grow in Delaware. Now that she lives near Santa Barbara, California, she is delighted that many of these grow right outside! Fascinated by the childhood discovery that plants make chemicals to defend themselves, Helga embarked on further academic study and obtained two degrees, studying plant diseases as a plant pathology major. She holds a BS in agriculture from Cornell University, and an MS from the University of Massachusetts Amherst. Helga then returned to Cornell to obtain a PhD, studying one of the model systems of plant defense. She transitioned to full-time writing in 2009.
More Posts
Subscribe
2 Comments
Oldest
Newest Most Voted
Inline Feedbacks
View all comments 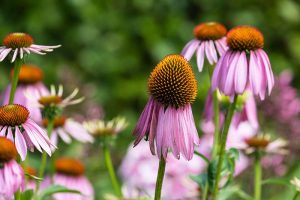 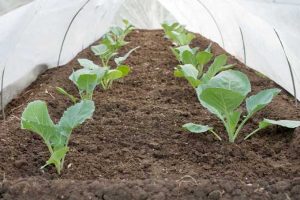