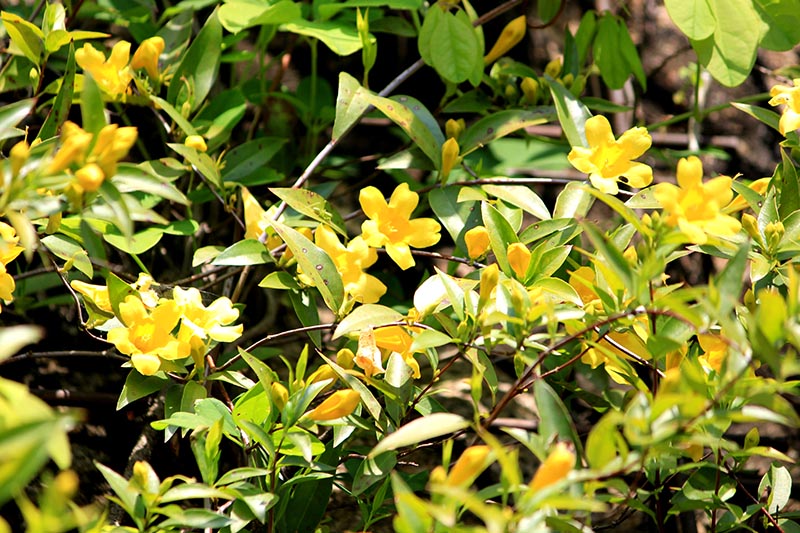 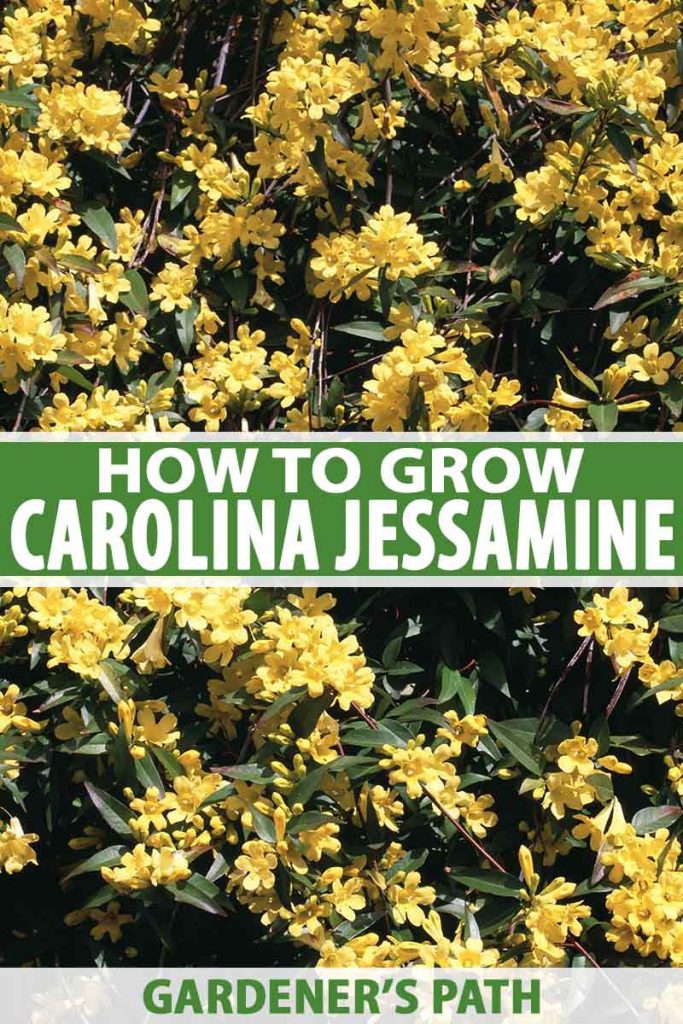 Though the profuse bell-shaped, yellow flowers that adorn the lengthy, twisted vines of Carolina jessamine are truly breathtaking, they conceal a deep, dark secret.

They, along with the rest of the plant, are capable of murder.

But no worries – just don’t eat it and you’ll be fine! And you’ll be thrilled with the spectacular show this plant puts on each spring.

Don’t let our silly drama scare you off. G. sempervirens is a colorful and beloved vine that is native to the southeastern and south-central United States as well as to Honduras, Guatemala, Belize, and Mexico with nary a homicide to its name.

Even deer are smart enough to leave this one alone, so you needn’t fear for the lives of your neighborhood foragers.

Climbing 10 to 20 feet up and over fences, trellises, walls, and anything else that gets in its way, this evergreen vine – hardy in USDA Hardiness Zones 7-9 – is a favorite for the cheerful color and heady perfume of its inch-long blooms borne on wiry reddish-brown stems. 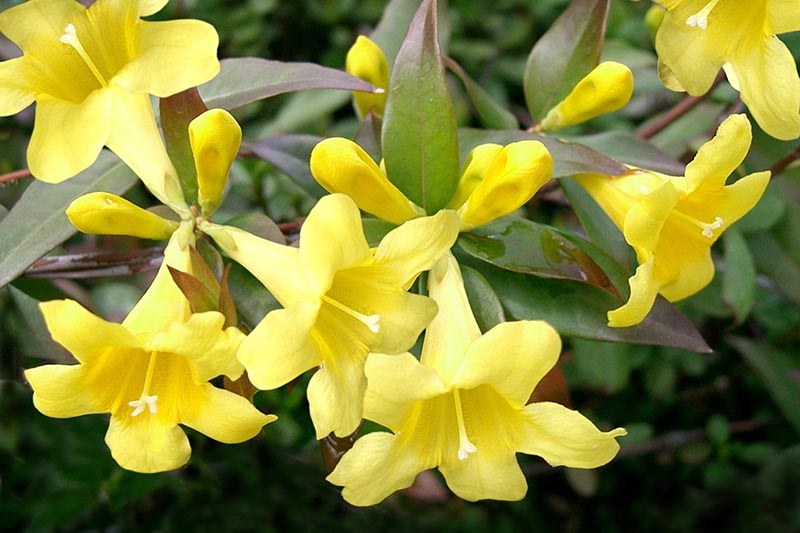 The appearance of its bright flowers is often taken as a sign that winter is coming to an end.

Homicidal tendencies aside, does this beauty sound like it might bring some much-needed drama to your garden? Here’s what you’ll learn in this article:

Of course, every potential murderer has a list of aliases, and this one is no exception. 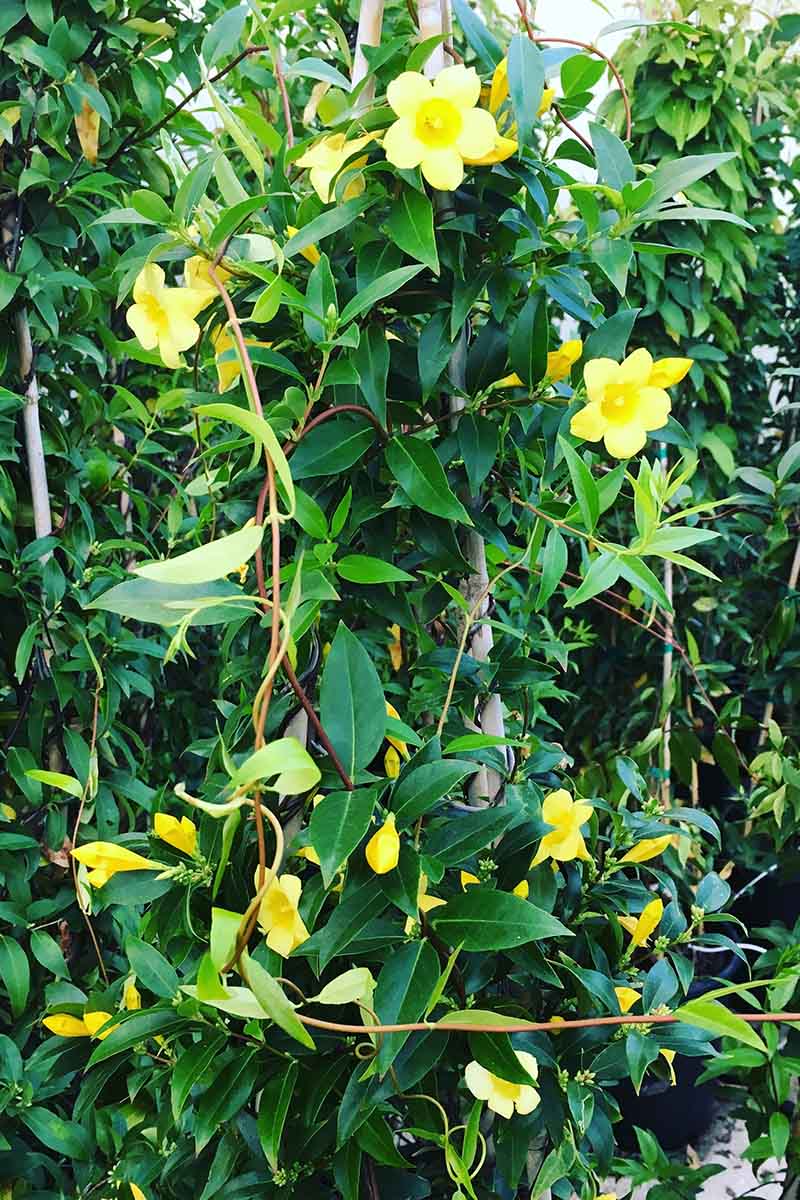 Carl Linnaeus, the Swedish botanist known as the “father of modern taxonomy,” first classified Carolina jessamine as Bignonia sempervirens in 1753.

However, French botanist Antoine Laurent de Jussieu shook things up in 1789 with the publication of “General Plantarum,” wherein he defined groups of plants differently than Linnaeus had.

The other two plants in this three-plant genus include the also-poisonous G. rankinii and G. elegans.

Gelsemium was once classified in the family Loganiaceae but was reclassified into Gelsemiaceae in 1994.

Mostuea consists of nine small flowering shrubs. Two, M. brasiliensis and M. muricata, are native to Brazil, while the others, including M. brunonis and M. adamii, are native to tropical Africa.

In Joint Resolution No. 534 passed in 1924, this lovely climber was declared the state flower of South Carolina. 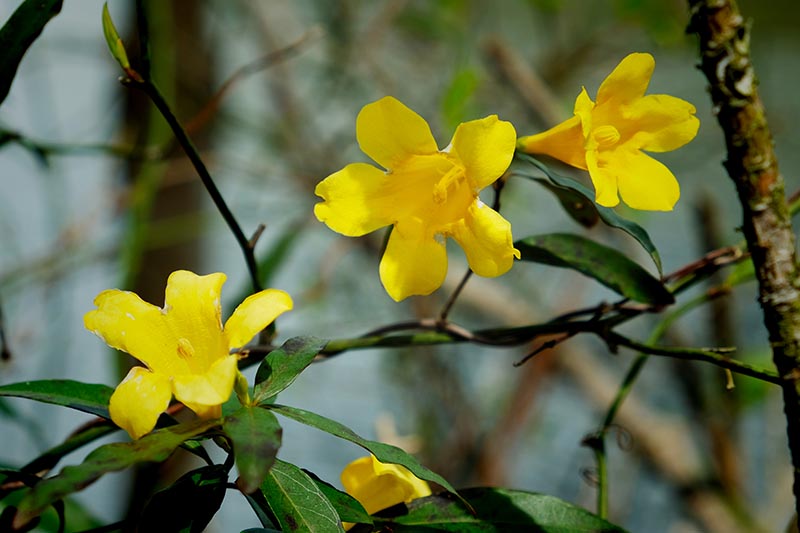 In doing so, the state’s General Assembly said, “It is indigenous to every nook and corner of the State; it is the first premonitor of coming Spring; its fragrance greets us first in the woodland and its delicate flower suggests the pureness of gold; and its perpetual return out of the dead of Winter suggests the lesson of constancy in, loyalty to, and patriotism in the service of the State.”

There you have it: language as flowery as the plant itself.

But more studies are required to confirm the plant’s effectiveness as a medicinal agent, according to the trio.

Perhaps unsurprisingly, this cold-blooded killer (just kidding) is quick to reproduce, and is amenable to several methods of propagation.

If you are collecting seeds, pick pods in the fall after the seeds inside have turned brown. Refrigerate the seeds until you’re ready to use them to keep them fresh and viable.

Plant the seeds in a well-draining growing medium, and place the pots or trays indoors, in a place where they receive bright light throughout the day.

Keep the soil moist until the seeds germinate in 7 to 10 days, then water twice a week.

If you’ve started your seedlings in the fall, they should be ready to transplant outdoors in the spring, while it’s still cool.

If you start seeds later than fall, you’ll be better off letting them mature in their containers until the next fall before setting them out.

This plant will root from semi-hardwood cuttings.

Using a clean, sharp implement, cut a 4- to 6-inch piece of stem late in the growing season when the new year’s growth has matured, in mid- to late summer. 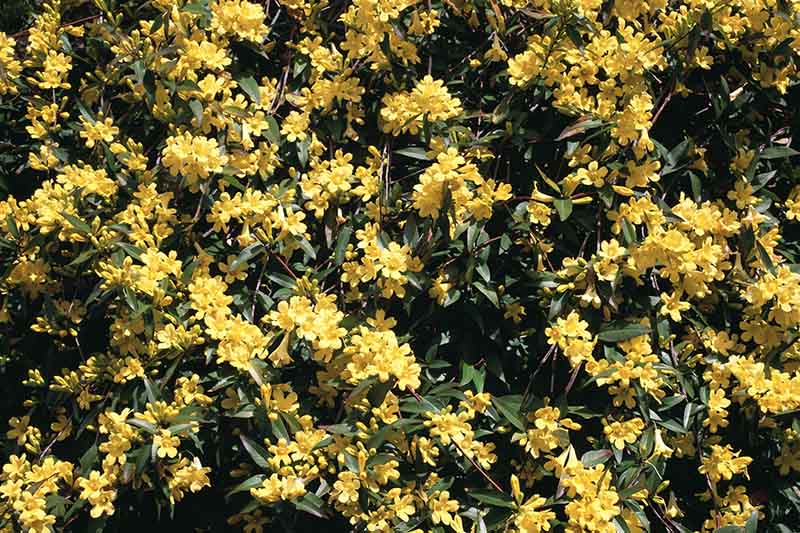 Fill a pot with good drainage with a good-quality growing medium. Insert a pencil into the soil and remove it to create a hole to receive the cutting.

Keep the growing medium evenly moist, in a warm area with indirect light, until the cutting begins to root. This should take about 10 to 12 weeks.

After you see growth, you can reduce waterings a bit. In autumn, feed the plants once a month with one teaspoon of NPK 10-10-10 fertilizer per quart of potting mix. In winter, reduce the quantity of fertilizer to one-half teaspoon.

Keep your new plants in a protected place until early spring, and then transplant outdoors when it’s still cool.

Keep in mind that you may not see newly rooted jessamine cuttings bloom for the first three years.

Another way to get more plants is by dividing the rhizomes. Start by digging up your jessamine in September or October. Remove the excess soil from the rhizomes, and then cut them into pieces, making sure that each rhizome has at least one bud on it. 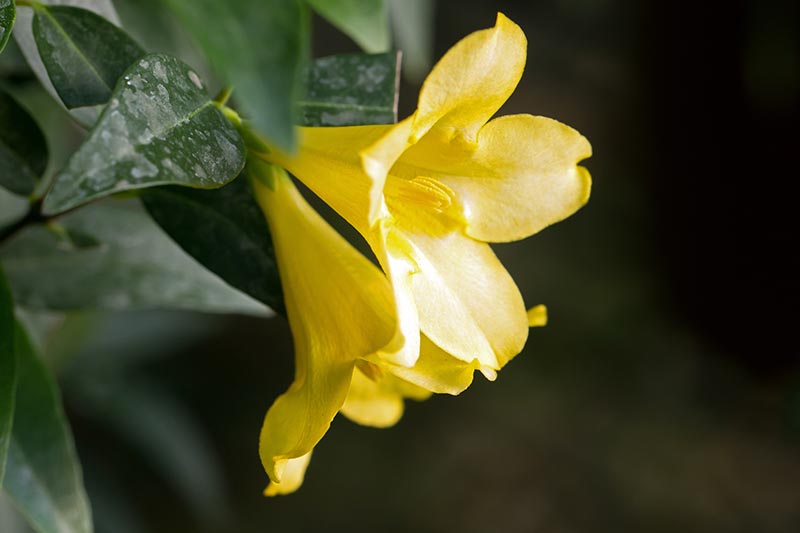 Bury the rhizomes in the ground to about the same depth they were planted when you dug them up, and water well. Continue to water twice a week throughout winter. In spring, you should see some above-ground activity.

From Seedlings and Transplanting

Transplant purchased or homegrown seedlings by simply digging a hole the same size as the container from which you are transplanting, and then placing your new plant in the hole.

You’re best off planting in early spring or fall, when it’s cool.

Water well, and add mulch around the planting area.

Yet another propagation method takes advantage of jessamine’s willingness to put down roots wherever it comes in contact with soil.

In summertime, simply trail a vine along the ground, burying 5-inch segments at regular intervals, leaving 8-10 inches between buried segments. For even better success, administer a small, slanting cut 1/4 of the way through the portions of the stem you intend to bury.

Give your layered length of vine some extra water – twice a week.  Once the segments have rooted, cut the mother vine to separate the rooted portions.

Carefully dig up the rooted portions and replant as desired, as described in the seedlings and transplanting section above.

Plant jessamine along a fence or wall, or even as a ground cover. While this plant will tolerate some shade, you’ll find it blooms much more prolifically and grows much more densely in full sun. In the right conditions, it will grow 3 to 5 feet per year. 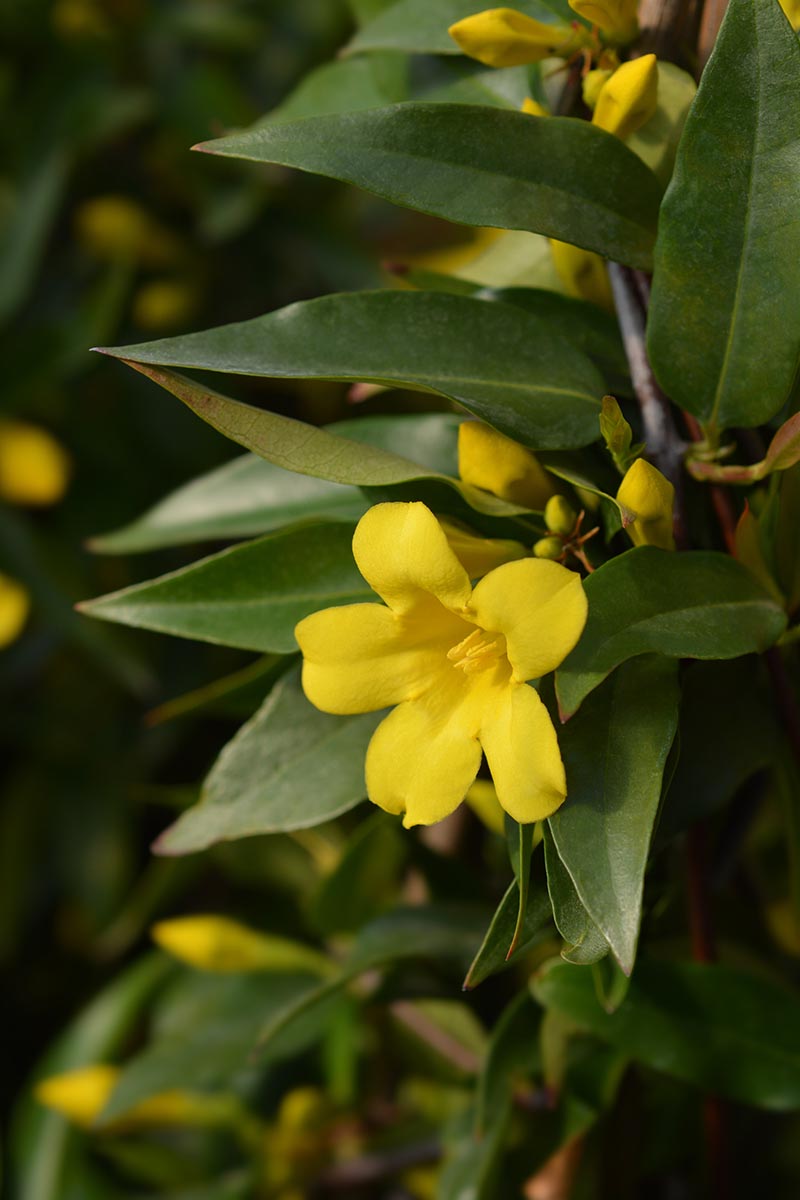 It’s also drought tolerant to an extent, but again will perform much better if watered regularly. And the same can be said for soil. It will survive in poor soil, but is much happier in organically rich soil with a pH of 6.0 to 7.5.

Not sure what type of soil you have? Conduct a soil test to understand whether these plants will do well in your soil, or if you need to amend it.

Many years ago, I planted two jessamines in not-good soil (I was younger and dumber then). One of the plants lasted a few years before succumbing; the other lasted many years but never really did much in terms of producing foliage or grand floral displays. 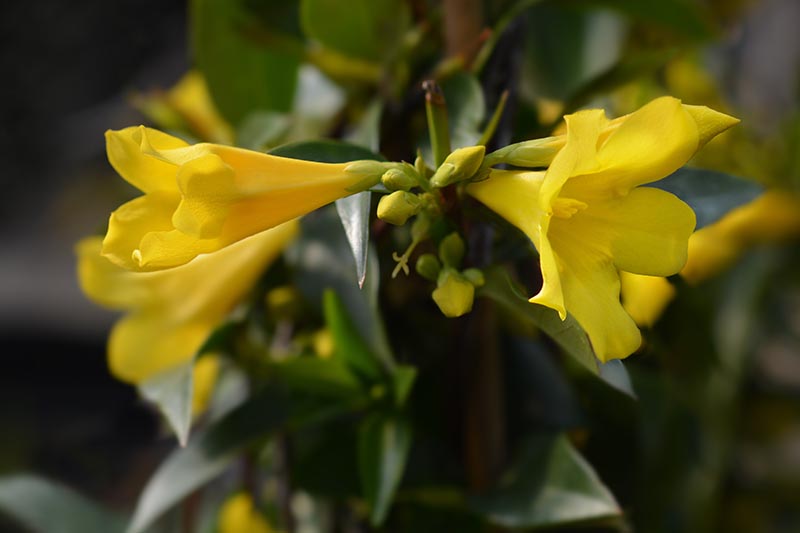 The second one finally bit it this past August when I failed to water it often enough.

Want to see better results than I did the first time around?

Fertilize Carolina jessamine in late spring after the plant flowers. Use a moderate amount of a slow-release balanced fertilizer. Don’t over-fertilize, as this will reduce flowering.

Carolina jessamine vines can get leggy and top heavy if not properly pruned once a year.

Bring out the clippers after it blooms in the spring. Clean out the old, dead stems and do some general cleanup, cutting it a bit smaller than the full size you’re aiming for. 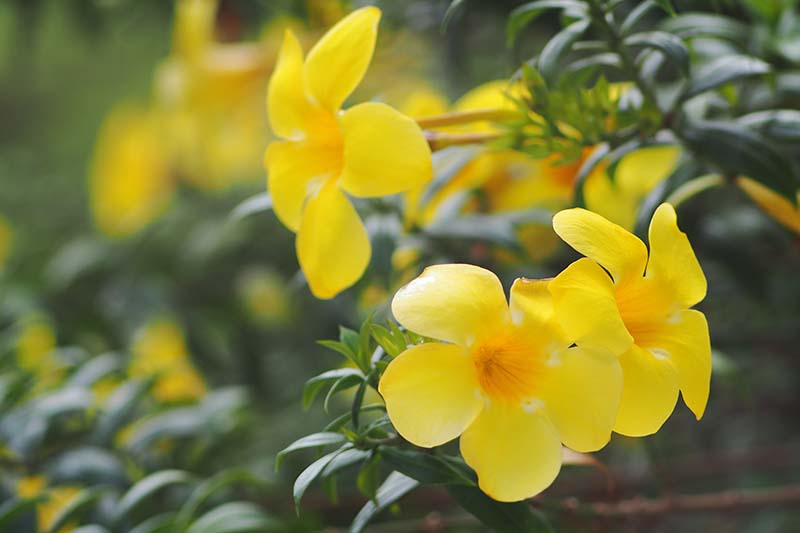 Oh, and be sure to wear gloves and long sleeves for the trimming process, as some people experience contact dermatitis from touching the plant. (See? I bet you’ve been so lulled by its charms so far that you forgot it’s also a bit evil.)

If you’re growing jessamine as a ground cover, keep the vines trimmed to about three feet long, but be sure to do the spring trimming only after the bloom period.

What you’ll likely see scrambling over dilapidated fences and up tombstones in the southeast is the open-pollinated variety such as these, available from Florida Foliage via Amazon.

An order of these will net you three live plants.

Or if seeds are more your thing, consider these from Aster Farm via Amazon. 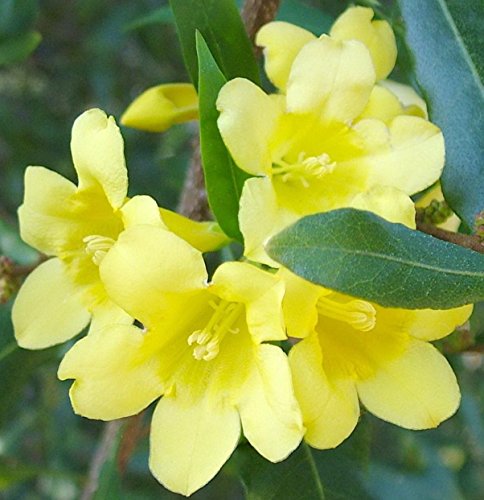 And, unsurprisingly, breeders have developed a few crafty cultivars that might catch your fancy.

‘Pride of Augusta,’ for example, develops double, ruffled flowers. This type is thought to have been introduced many years ago by the now-defunct Fruitland Nursery in Augusta, Georgia.

‘Margarita’ is a superior seedling discovered by Don Jacobs of Eco Gardens in Decatur, Georgia.

Jacobs was impressed by the selection’s larger, more prominent flowers, and named the variety after his wife. It has been found to be more cold-tolerant – hardy to Zone 5a – than species jessamine.

Carolina jessamine has no serious disease or insect problems. 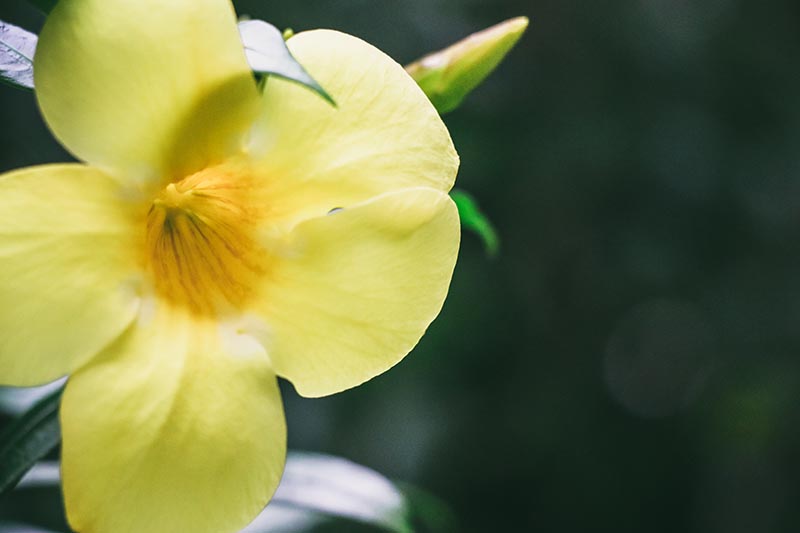 If the leaves stay wet for an extended period, you may see some fungal leaf spotting, which presents as brown, tan, or black spots and can be treated with a fungicide.

You may occasionally see aphids on jessamine. 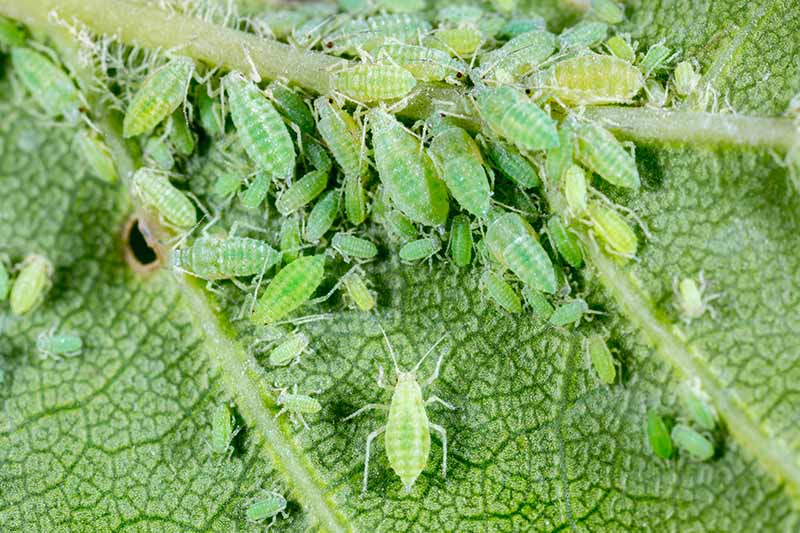 Aphids are tiny, sap-sucking insects that may be green, red, brown, yellow, or black. They harm plants by sucking essential fluids from leaves and other plant parts.

Use insecticidal soap to kill these pests, or get rid of minor infestations with a strong spray from a garden hose. See our guide to learn more about controlling aphids in your garden.

Carolina jessamine is lovely when grown on an arbor or trellis.

It also makes an attractive ground cover for areas with little to no foot traffic.

It’s easy to live with this deadly beauty; just don’t eat it. And be sure to warn children against mistaking the attractive blooms for those of honeysuckle.

The spectacular allure provided by these twining vines outweighs the easily avoidable risks associated with growing them.

Care is fairly simple for this aggressive climber – all it needs is some sun, even moisture, an annual haircut, and maybe a dose of fertilizer once a year.

Have you grown Carolina jessamine? Any tips to share? Add your two cents in the comments section below.

Looking for more vines to adorn your garden? Check out these articles next:

A former garden editor for a daily newspaper in Austin, Texas, Gretchen Heber goes through entirely too many pruners and garden gloves in a year’s time. She’s never met a succulent she didn’t like and gets really irritated every 3-4 years when Austin actually has a freeze cold enough to kill them. To Gretchen, nothing is more rewarding than a quick dash to the garden to pluck herbs to season the evening meal. And it’s definitely time for a happy dance when she’s able to beat the squirrels to the peaches, figs, or loquats.
More Posts
Subscribe
10 Comments
Oldest
Newest Most Voted
Inline Feedbacks
View all comments 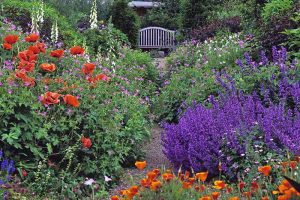 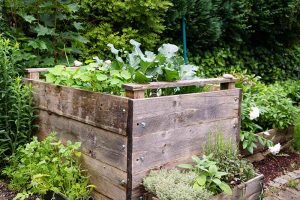