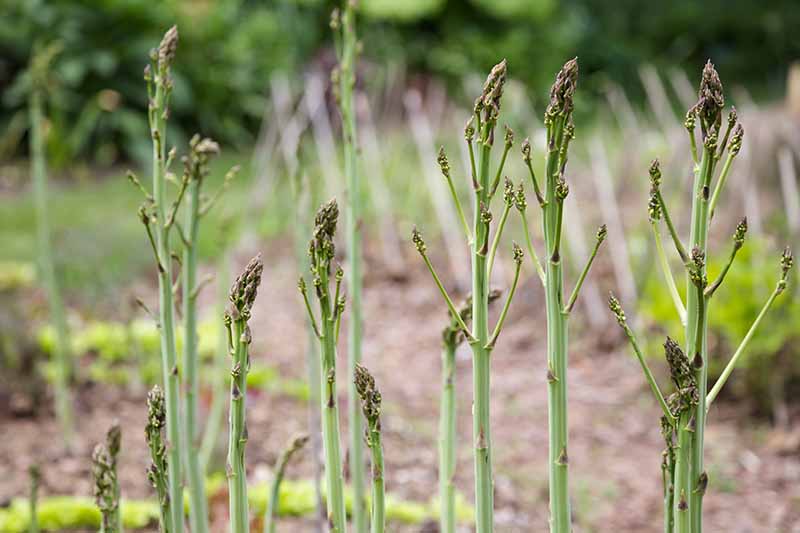 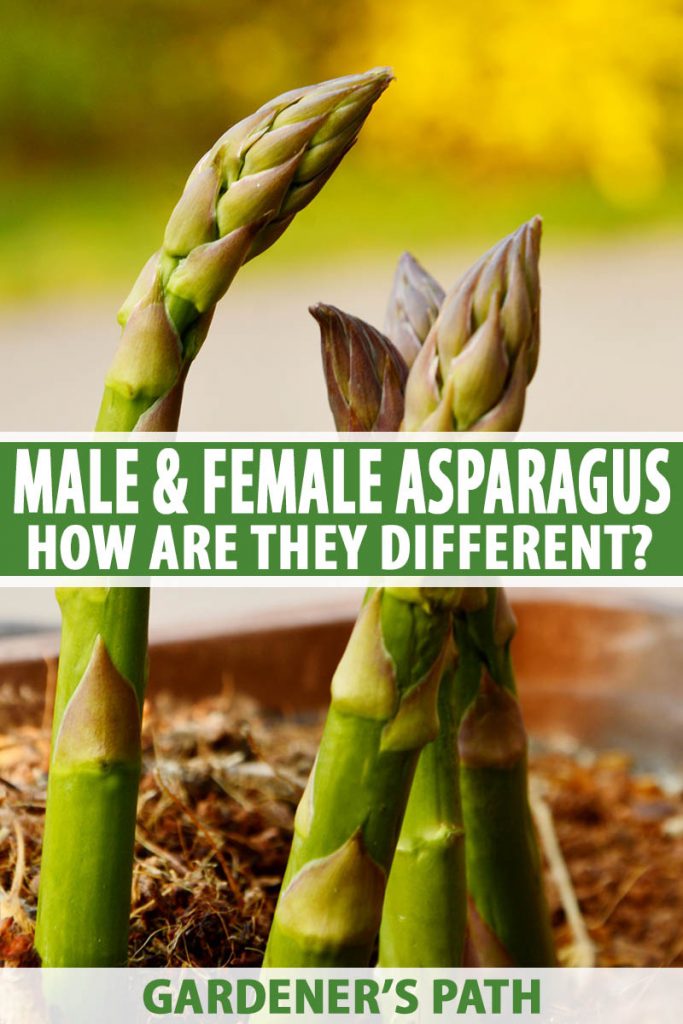 In my book, asparagus (Asparagus officinalis) is king of the edible perennial garden.

Producing tender spears early in spring, this veggie makes for delicious seasonal meals – and a sensational start to the year’s growing season.

Unlike some garden vegetables such as peas, which are self-pollinating, asparagus is dioecious, meaning some plants are male and some are female.

To reproduce, a honeybee or some other pollinator has to visit the flowers of both male and female plants.

Since the differences in gender are meaningful when it comes to your yearly harvest tally, recognizing the gender of these plants can be a helpful gardening skill.

Are you ready to add this knowledge to your gardening toolkit? Good – I hear your resounding “Yes!”

But before we get started, here’s a quick overview of what I’ll cover:

I realize you are eager to learn how to look at an asparagus plant and tell its gender. 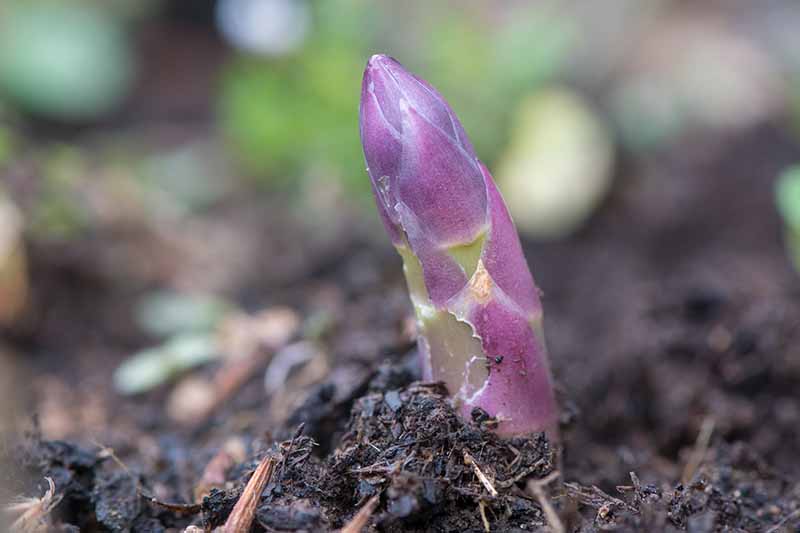 But before we go there, let’s start by examining the ways in which the two genders are indistinguishable:

So, the gender of asparagus plants is pretty hard to distinguish up to this point – at least from a human point of view. 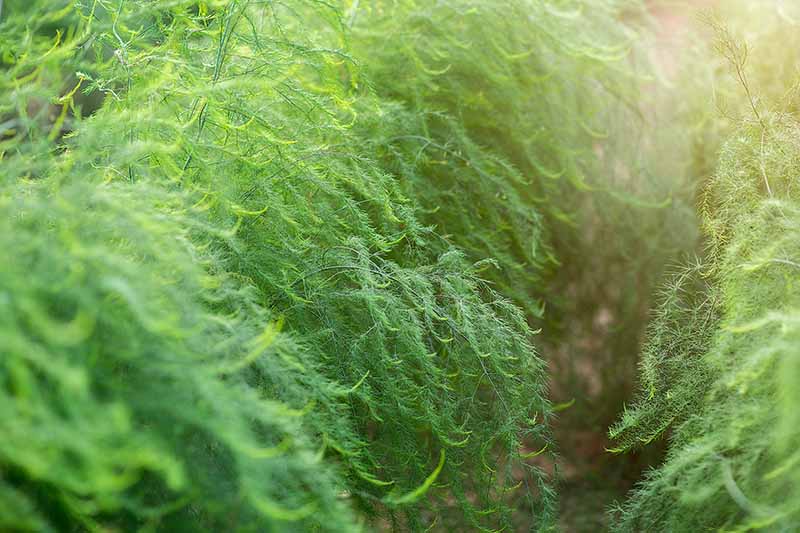 But we’re starting at the flowering stage, which means reproduction. This is where things tend to get more graphic, and gender becomes more easily discernible to the human eye.

Even though both sexes produce flowers, the blooms of each gender aren’t exactly the same. 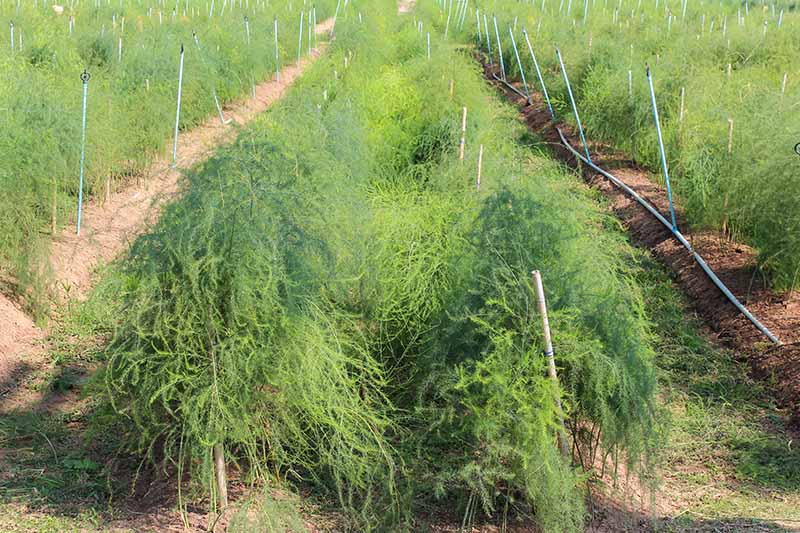 You can distinguish between genders by looking at the plants’ tiny greenish white or yellow flowers, which measure only around a quarter of an inch in length – so make sure you have your magnifying glass ready. 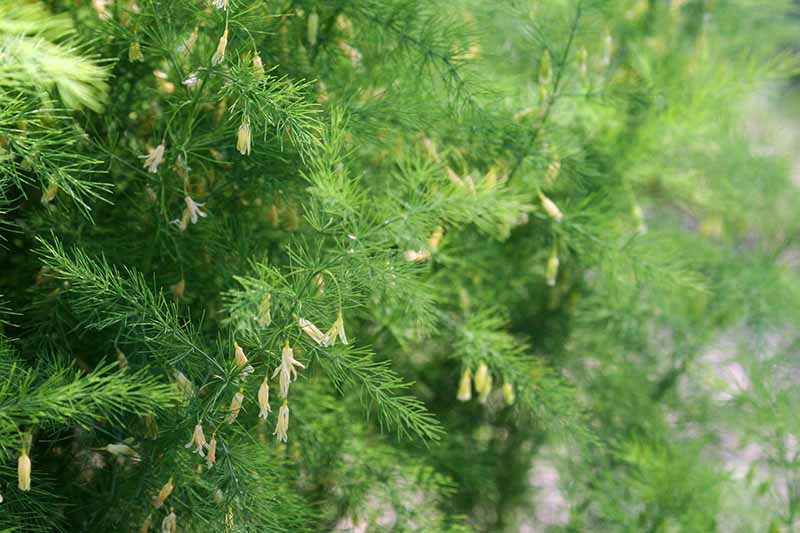 If you look inside the flower petals and see visible yellow or orange stamens, you have a male plant.

And if your peek beneath the petals reveals a green ovary and white pistil, you are looking at a female plant.

Another discernible difference between blooms is that male flowers are more bell-shaped than female flowers, which are more spherical. 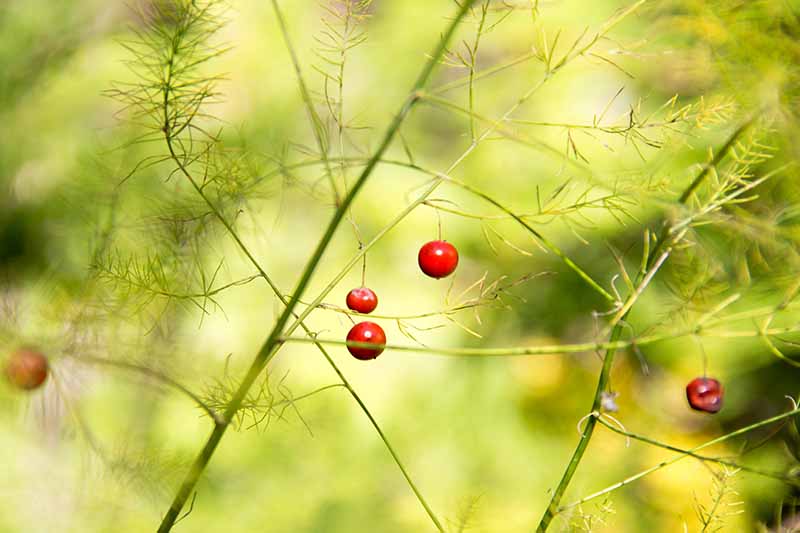 If you have just planted your crowns, your female plants may not develop berries until after the first year.

Berries start out green and then gradually ripen to red in late summer or fall.

You’re probably wondering about the rare occasions I mentioned earlier. While rare, there are the occasional male hermaphrodites which self-pollinate and produce berries.

In the majority of cases, though, males do not produce berries.

Ferns laden with berries can tend to break or bend to the ground, and contact with the wet soil below can introduce fungal growth.

Before berries mature, some gardeners will dig up and remove female plants, crowns and all, and remove them from their beds.

In addition to acting as a measure that can prevent the spread of fungal diseases that may harm the health of your plants, there are other reasons why this may be a good idea.

I’ll cover these in the following sections.

Next on our list of differences, we have the issue of volunteers – also known as weeds, depending on your perspective.

When your plant has berries, the possibility of babies sprouting from the seeds they contain exists, whether you want them or not. Each berry typically contains one to six seeds.

Many gardeners see these unplanned seedlings that pop up in the asparagus bed (or other parts of the garden – thanks, birds!) as a nuisance, since volunteers can take nutrients away from your established crop and crowd the bed. 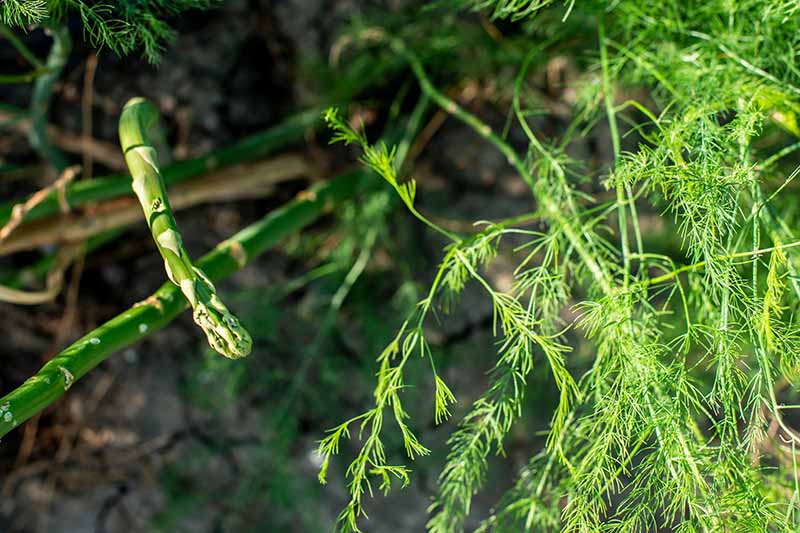 While volunteers can sometimes be seen as a good thing, an easy way to get free seedlings that you don’t have to worry about starting yourself, asparagus usually lives for 15 to 20 years.

With an established crop, you already have a long term investment that you may not need to renew very often.

Since males do not have to expend valuable energy on berry production, they are often more long-lived, and they are able to put more of their energy into spear production. 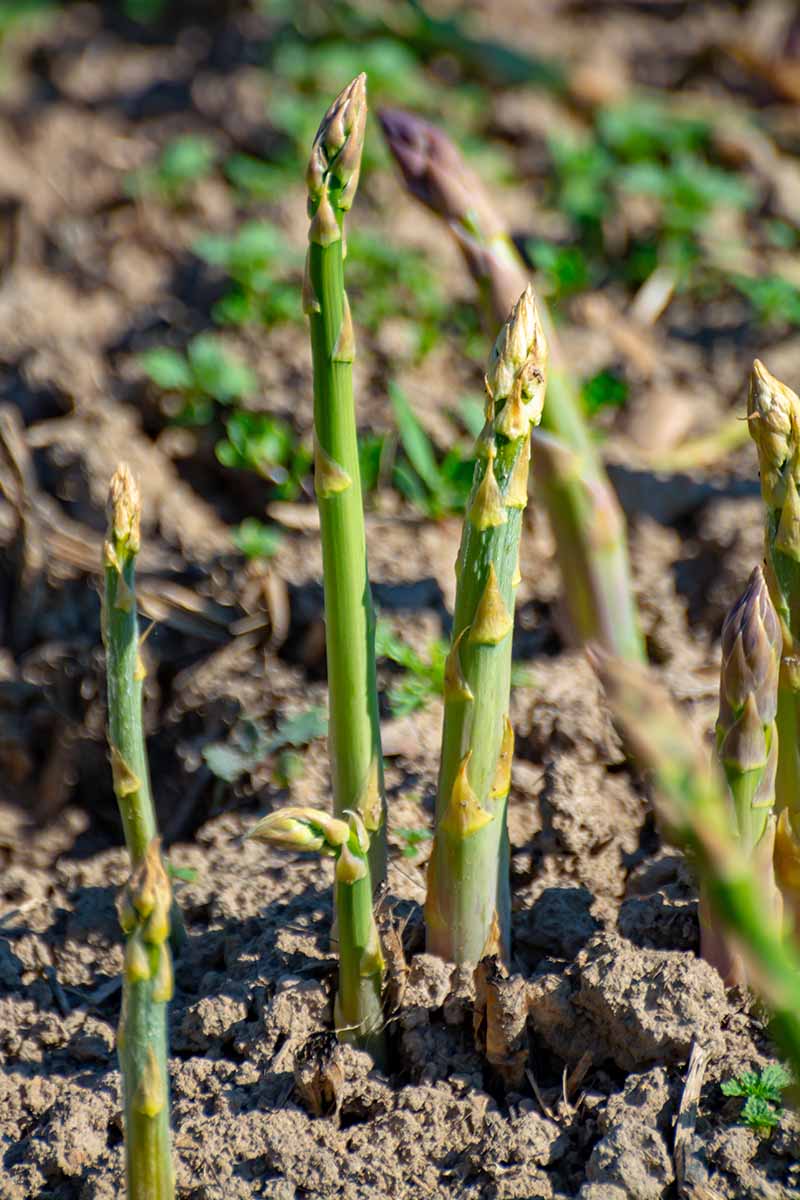 Among commercial growers of this crop, they are considered more profitable than females because of their higher yields.

All-male hybrids, which are hybrids selected to eliminate most female plants, are even more productive. 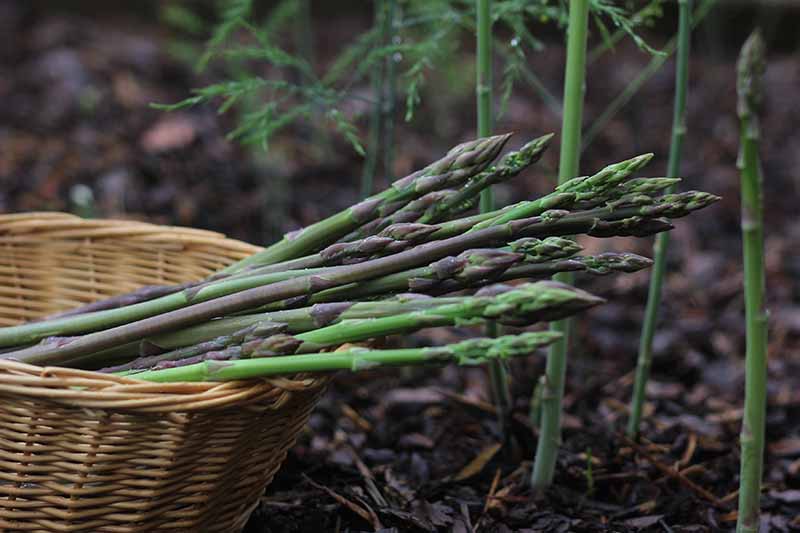 And all-male asparagus crowns are often more expensive as well.

Increases in productivity with these hybrids are extreme, allowing for three times the average yield of heirloom cultivars. 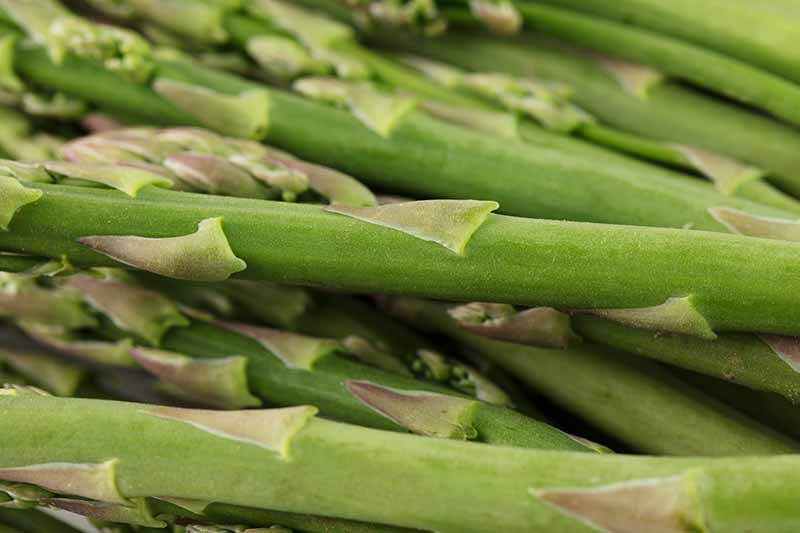 You can read more about these all-male hybrids in our asparagus growing guide.

Not only do all-male hybrids produce more spears, they produce larger ones. 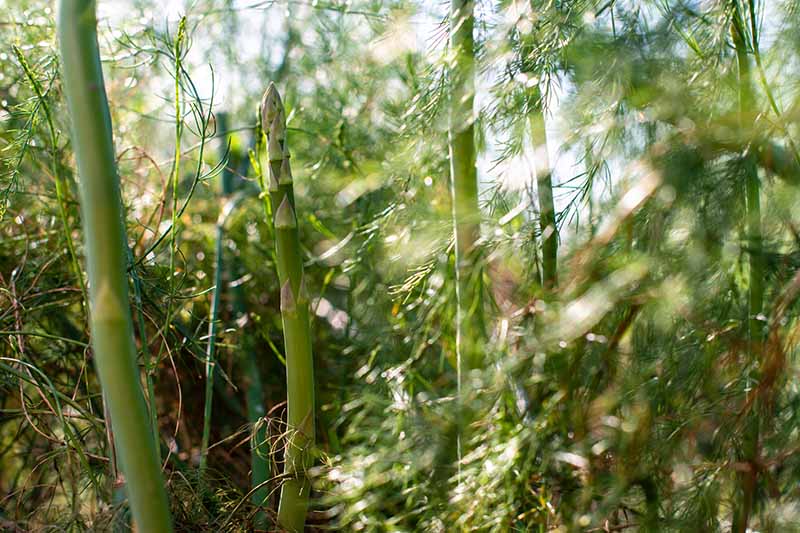 And these larger-sized spears are typically more desirable.

According to Jack Rabin, Professor Emeritus at Rutgers University, “The larger diameter spears have superior culinary qualities of tenderness and sweetness.” 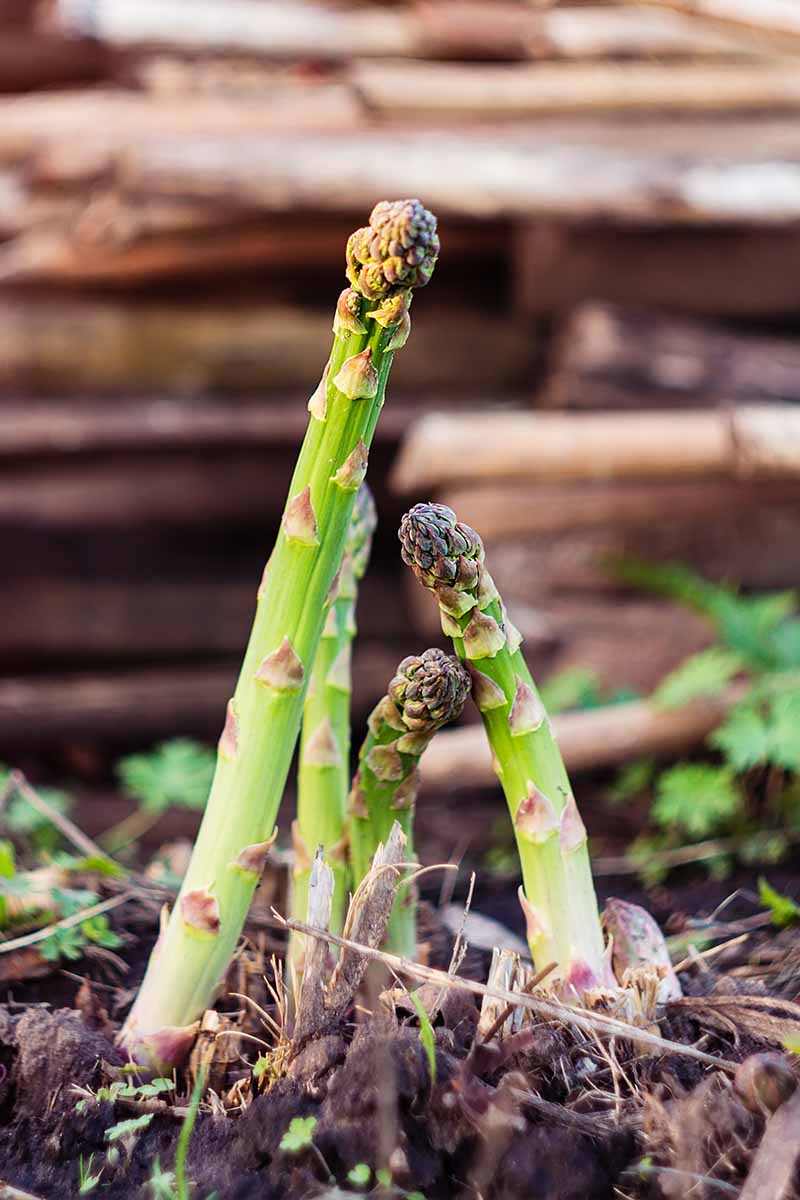 Male plants often produce spears earlier in the season than females as well.

Some gardeners swear by store-bought all-male asparagus crowns for planting, while others love starting plants from seed, and saving their own seeds to grow yet more plants.

Now that you’ve had a crash course in (plant) gender inequality, you know that male asparagus plants are the ones you want for more abundant harvests, occasional or nonexistent berries, and no volunteers.

If you want to save your own seed, having both male and female asparagus plants is a necessity. 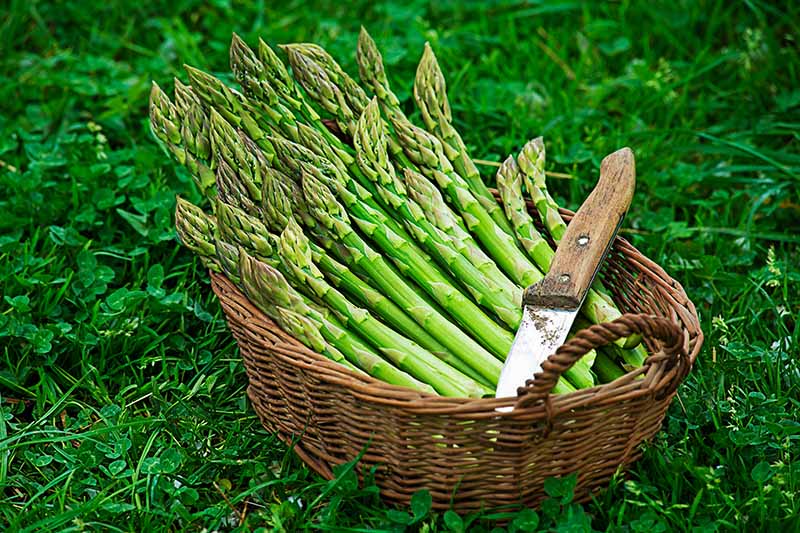 After learning to differentiate male from female asparagus plants, will you let the ladies stay in your garden? Or will you turn it into a boys club? Let us know in the comments.

Ready to learn more about growing asparagus? Check out some more of our detailed guides such as: 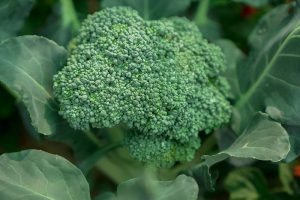 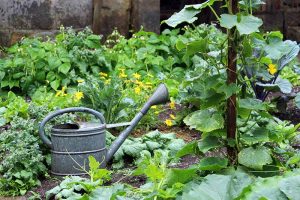 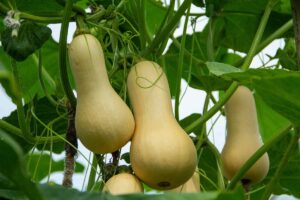 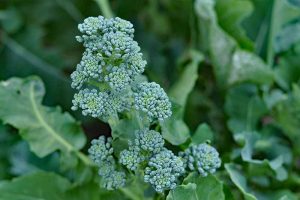 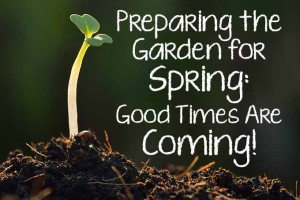