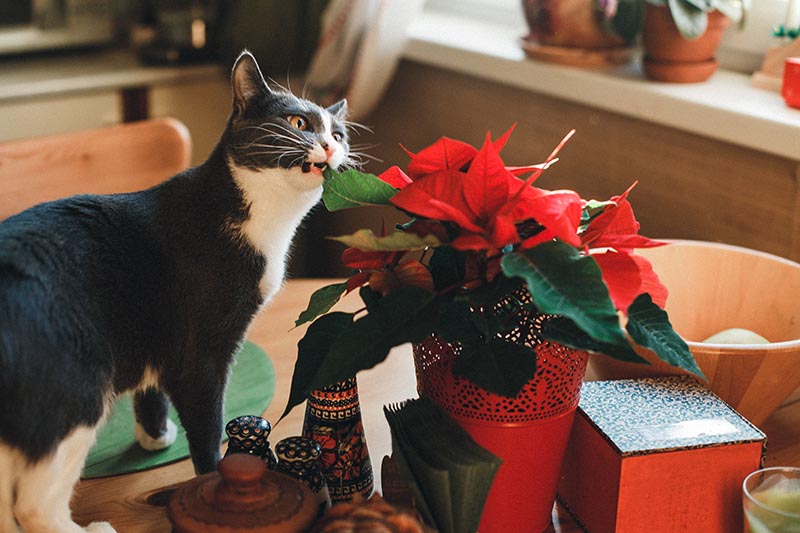 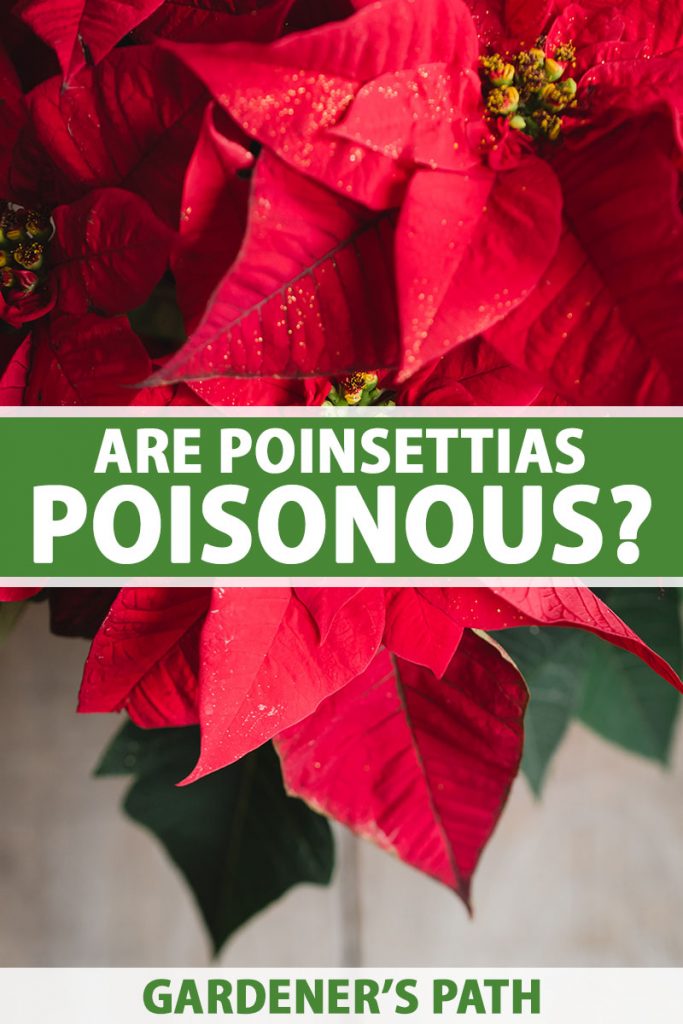 In spite of their reputation, poinsettias are not considered poisonous – there have been no confirmed fatalities from ingesting this plant.

However Euphorbia pulcherrima, aka “Christmas flower,” is far from edible. Just because it’s not deadly doesn’t mean it’s safe to eat.

The sap contains low levels of toxic substances that may cause some unpleasant gastrointestinal side effects if ingested, and exposure to the plant may be of even greater concern to individuals with sensitivities and allergies, particularly those with latex allergy.

This holiday plant’s reputation as highly poisonous is somewhat of a myth, but one that has taken a firm hold and won’t seem to loosen its grip.

So that you can re-evaluate your concern about the safety of this festive plant, I’m going to take you back to the origins of this myth, clear up some confusion on poinsettia’s safety as a houseplant, and let you know under what circumstances you should be concerned.

Here’s what I’m going to cover:

The Myth of Poinsettia Toxicity

So if this holiday houseplant isn’t poisonous after all, where did its bad reputation come from? 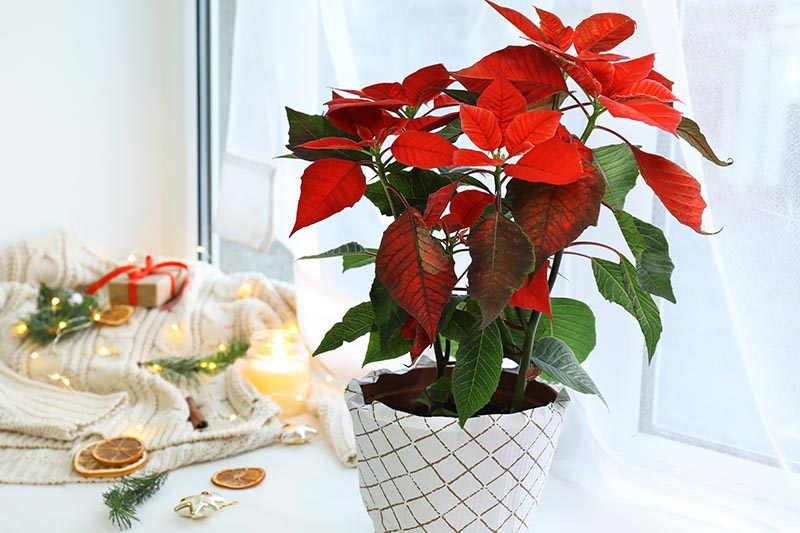 The source of this floral myth is over a hundred years old. In 1919, a child in Hawaii was thought to have died after eating – or maybe just chewing on – a single poinsettia leaf.

This anecdote was cited as fact by author Harry L. Arnold, MD, in his book “Poisonous Plants of Hawaii,” published in 1944.

“The milky juice and the leaves are poisonous. The two-year-old child of an Army officer at Fort Shafter died from eating a poinsettia leaf in 1919.”

Arnold went on to explain that those who ingested this plant became delirious before dying.

Since poinsettia sap is very similar to latex, a common allergen, some medical professionals have speculated that the child in question died because of an allergic reaction to compounds in the sap.

However, James Boodley, professor of floriculture at Cornell University inquired into the original story while he was serving as a visiting professor in Hawaii in 1972.

In the course of his research, he learned that there was actually no connection between the poinsettia and this child’s death.

The story that laid the foundation for E. pulcherrima to be described as highly poisonous turned out to be completely unsubstantiated. 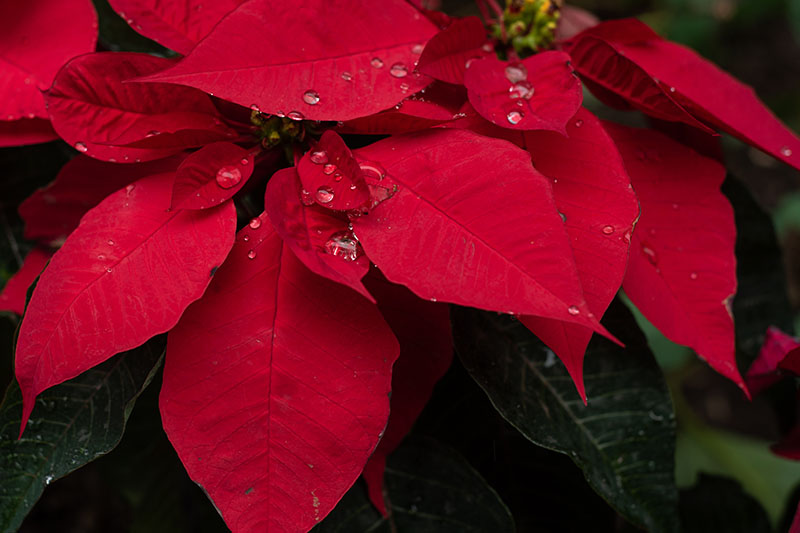 However, the rumor about a child in Hawaii dying from eating a poinsettia leaf certainly made a big impact on the popular imagination.

This winter-blooming plant was treated as if it were highly poisonous for many decades.

And a century after the origin of this myth, many people still believe it to be so, even though researchers have been testing it for toxicity and debunking the myth since the 1970s.

In 1971 an experiment to test this plant’s toxicity was carried out by researchers at Ohio State University. Concoctions made from various parts of the plant were blended up and fed at a high concentration to a group of 55 lab rats.

None of the rats died after ingesting this high dose. In fact, they didn’t show any reaction at all – they didn’t even exhibit any changes in their behavior. 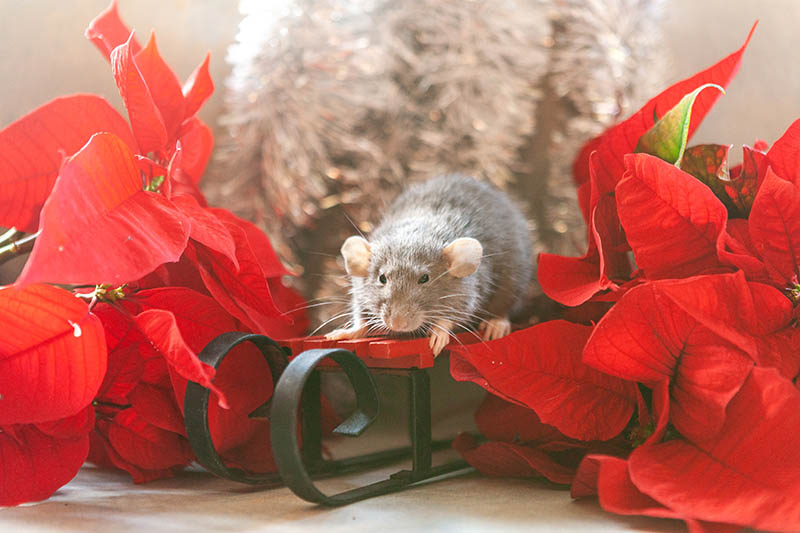 The researchers who carried out this experiment concluded that a hypothetical 50-pound child would have to eat at least 500 leaves to ingest a potentially toxic dose.

I don’t know about you, but I’ve never met a child willing to eat 500 leaves of anything in one sitting, much less leaves from something that tastes as bad as poinsettia. Reportedly, it has a flavor that is not just extremely bitter but “indescribably awful.”

Do not include this holiday plant on your list of edible flowers!

If that single research experiment isn’t convincing enough for you, don’t worry, there’s more evidence that the Christmas flower is not poisonous. 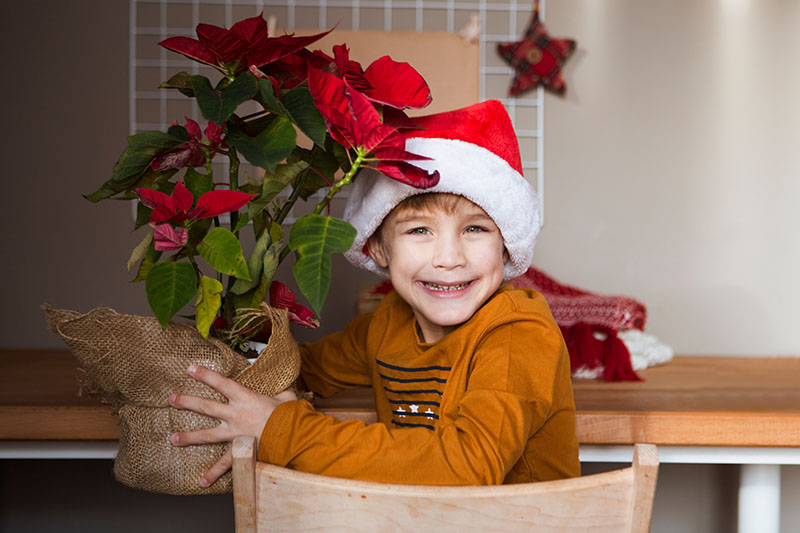 In an article published in the Times Herald-Record in 2016, Dona M. Crawford, community horticulture educator for Cornell Cooperative Extension of Ulster County, explains that out of 92 calls to poison control in which children had eaten not just nibbles, but “substantial” quantities of E. pulcherrima, “none of these cases resulted in even slightly harmful effects.”

And poison control, officially known as the National Capital Poison Center, states this as their bottom line about the safety of poinsettias: they can be irritating but do not cause fatalities.

Now that we know there is no confirmed evidence of anyone dying from eating this holiday plant, let’s look at some of the unpleasant – and for some, worrisome – effects that it can have on our health.

Poinsettias aren’t poisonous, but they aren’t totally harmless either. If ingested, they can – but don’t always – cause a tummy ache or other gastrointestinal issues. 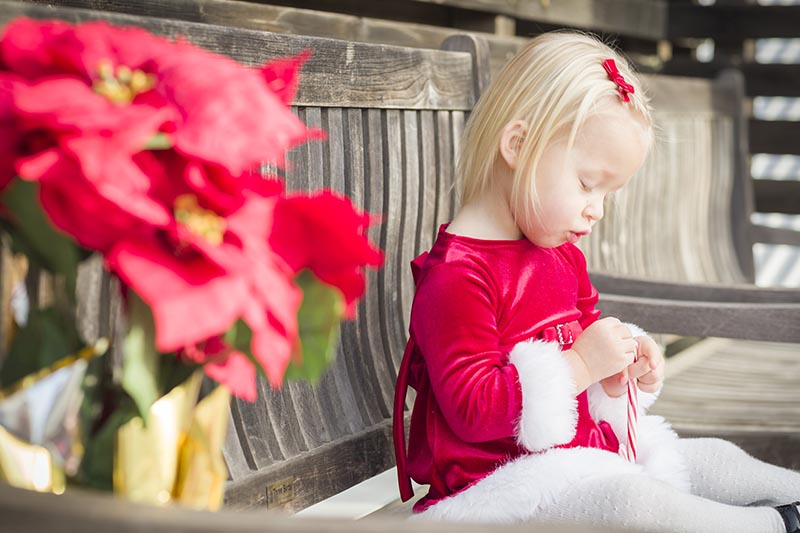 If this child (who apparently has a strong penchant for bitter flavors) did attempt to break the world record for eating E. pulcherrima leaves, they probably wouldn’t get very far.

Five leaves are often enough to cause nausea, and potentially, vomiting or diarrhea, which would effectively put an end to this kid’s Christmas flower binge.

So although ingesting large quantities of poinsettia is not fatal, this doesn’t mean it’s totally harmless.

It may be comforting for concerned parents to remember that it is very unlikely that children would eat large quantities of any part of this festive plant – as pretty as it is, it just doesn’t taste very good.

However, if your child experiences any of the above mentioned symptoms, consult your doctor or other healthcare professional immediately.

In addition to causing gastrointestinal distress when eaten, poinsettia can also have allergenic effects on some individuals.

Like other members of the euphorbia family (notably the rubber tree), Christmas flowers contain a milky sap that shares several proteins with the latex used to make rubber.

This milky sap contains diterpenoid euphorbol esters and saponin-like compounds that can be irritating and cause skin rashes.

While this sap isn’t exactly the same as the latex that is used to make rubber gloves, it is similar enough to cause problems in some people – 40 percent of individuals allergic to latex can also react to E. pulcherrima.

But it’s not just contact with the milky sap that can cause problems.

Proximity to the plant itself can cause wheezing, rhinitis, asthma, and other symptoms in individuals with a latex allergy.

For those with allergies, there is a risk of a severe reaction to poinsettia plants and medical attention should be sought immediately.

And it’s not just those with latex allergies who may find the Christmas flower to be a health concern.

Individuals with allergic rhinitis or certain food sensitivities were also found to be at risk for developing allergies to poinsettias and other ornamental houseplants.

If your household includes people with known latex allergies, or any other allergies or sensitivities, it may be wise to keep your home free from live poinsettia plants.

Instead, you may choose to complete your holiday decor with an artificial plant.

A word of warning: even in individuals with no existing allergies, skin irritation is still a possibility when handling these plants.

If you keep your poinsettia on as a houseplant after the holidays and decide to do any pruning, be sure to wear gloves to protect your skin from its potentially irritating sap. 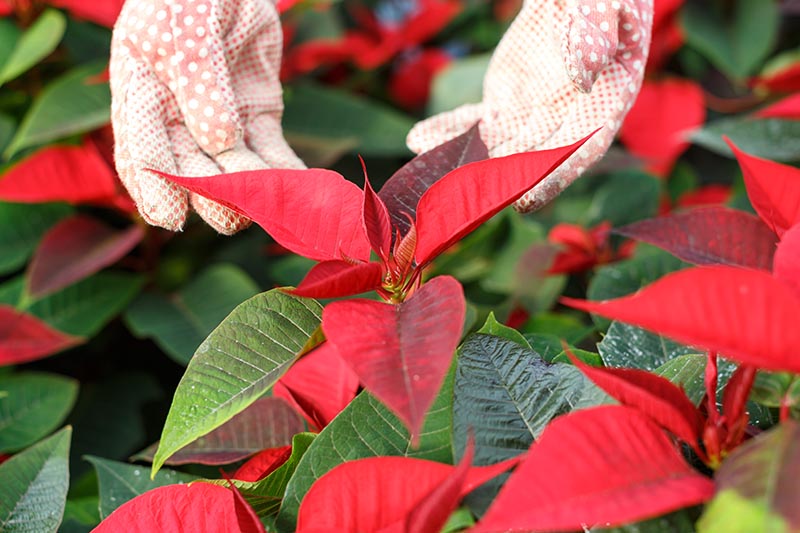 Also keep in mind that many other houseplants come with the same risks for allergic response.

For instance, weeping figs, yucca, and (male) palms are among the houseplants that can also provoke reactions in those prone to allergies.

If allergies are a concern, you may want to choose non-toxic houseplants more suited to allergy-free living, such as gerbera daisies or Swedish ivy.

Unless you skipped ahead to this section, you now know that while poinsettia isn’t considered poisonous, it can cause gastrointestinal distress if ingested, as well as allergic reactions in some individuals.

The same applies to pets as well as people.

The ASPCA’s toxic and non-toxic plant database, a valuable resource for pet owners, lists E. pulcherrima as toxic to dogs and cats. However, it states that poinsettia is “irritating to the mouth and stomach, sometimes causing vomiting, but generally over-rated in toxicity.”

If cats or dogs nibble on this holiday plant, they may drool or show signs of nausea and discomfort.

The American Veterinary Medical Association warns that there are much more dangerous plants to have around at the holidays than poinsettia, and in particular points out the risks of decor made from live holly or mistletoe, both of which are highly toxic to cats and dogs – and humans, for that matter.

Young animals such as puppies and kittens will be more susceptible to the unpleasant effects of the Christmas flower, and their natural curiosity may cause them to take a nibble.

If you have pets that think houseplants are on their own personal tasting menu, you may want to keep poinsettias out of your home to avoid any concerns, or simply place them out of reach. 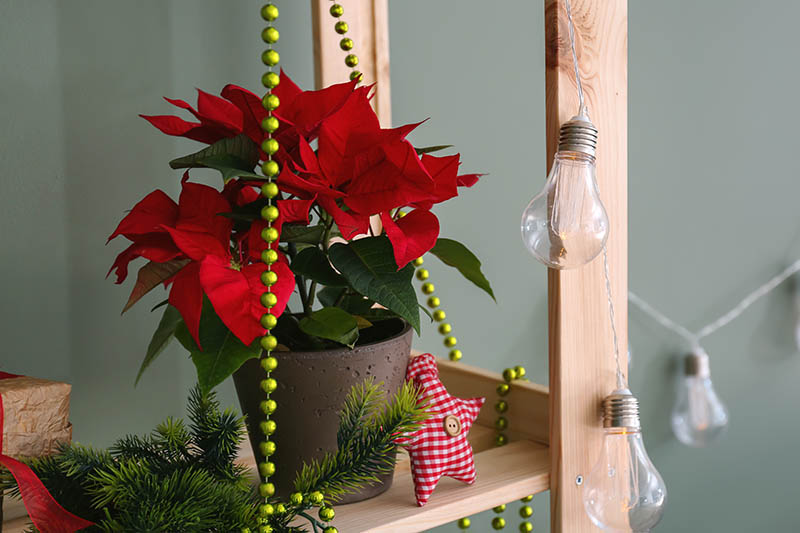 If you have an especially curious pet, you might situate your Christmas flower on an out-of-reach shelf, or consider repotting it in a hanging basket.

If your pet shows any signs of distress or illness, contact a veterinarian immediately.

Flora That’s Both Friend and Foe

Let’s review the main safety points of the Christmas flower:

Poinsettias may be mildly toxic if ingested, and they do come with some health concerns to both humans and pets: they can cause upset tummies, in some cases they can provoke allergic reactions, and the milky sap from broken leaves or stems can cause skin irritation.

If you have a high risk for allergies, think twice about bringing this festive plant into your home and to be on the safe side, keep it out of reach from young kids and pets.

And don’t forget to be super vigilant about the truly toxic living holiday decor, such as mistletoe and holly. 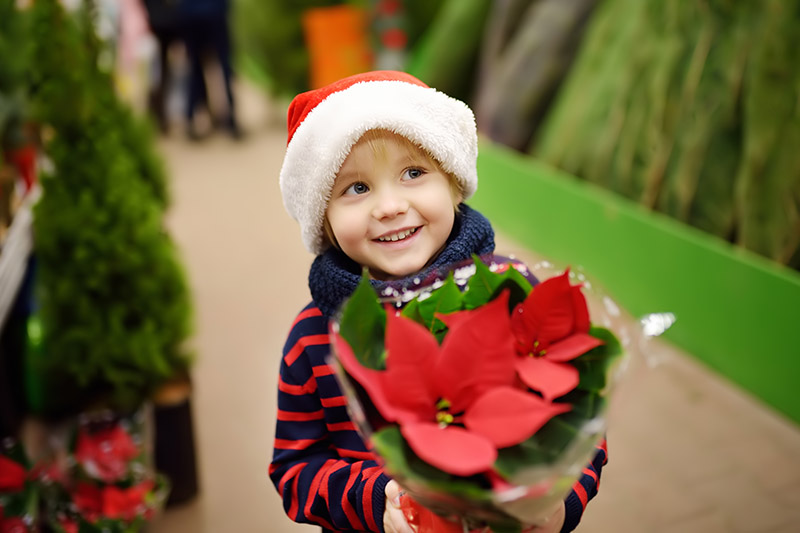 Have you ever had to call poison control with an emergency concern about this holiday plant? Let us know in the comments, and share your valuable experience with our readers.

Check out our guide if you’d like to learn more about how to grow poinsettia.

And if you are interested in non-toxic houseplants to brighten up your home, you’ll need these guides next:

The staff at Gardener’s Path are not medical professionals and this article should not be construed as medical advice intended to assess, diagnose, prescribe, or promise cure. Gardener’s Path and Ask the Experts, LLC assume no liability for the use or misuse of the material presented above. Always consult with a medical professional if you have any concerns about the health of your children or pets. 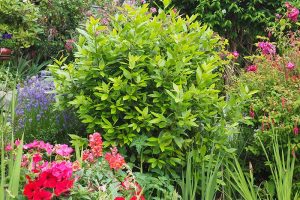 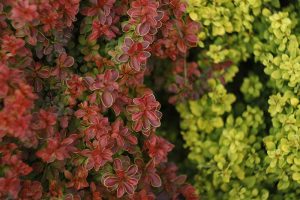 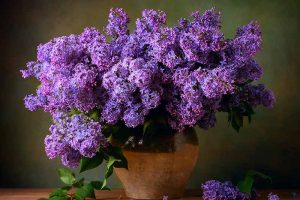 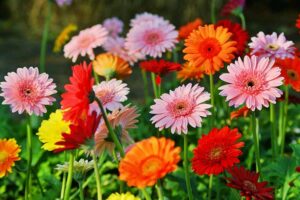 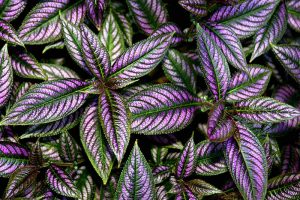