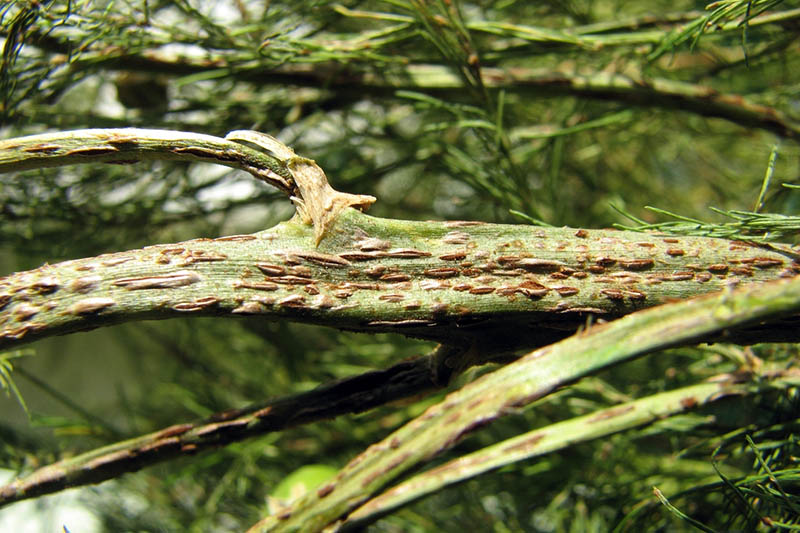 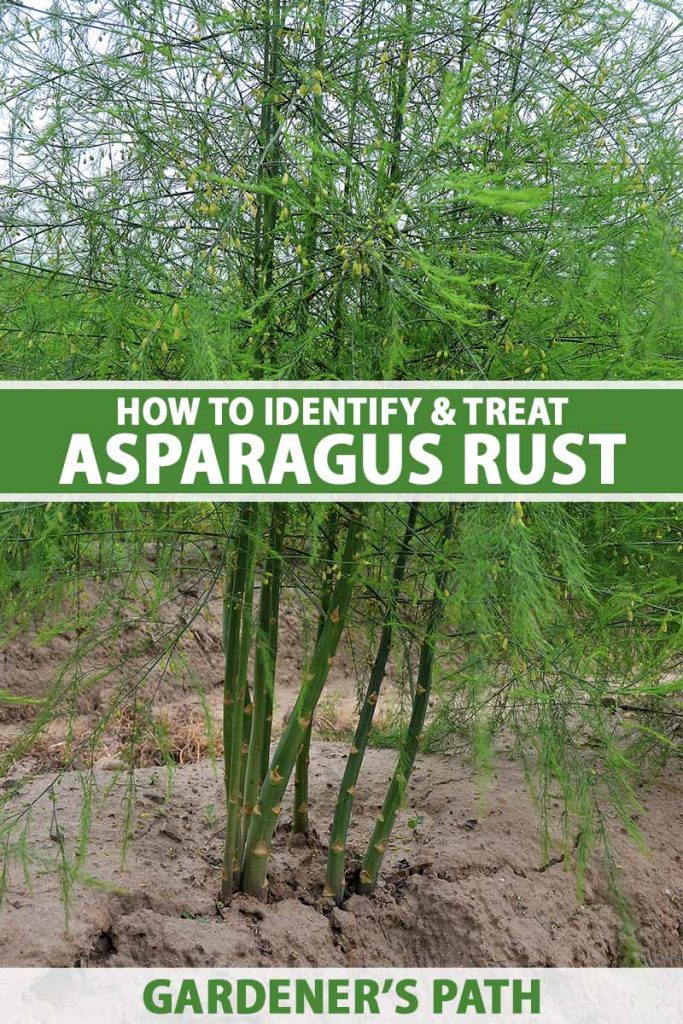 Asparagus rust is a highly complicated fungal disease with four different stages that can invade your plants without showing symptoms until it is too late.

Cultivars bred to be resistant to this pathogen often lose effectiveness over time. Read on to learn what symptoms to look for and how to treat your infected plants.

Since its discovery and official documentation in France in 1805, asparagus rust has proven itself to be a pernicious disease that can devastate asparagus crops wherever they are grown.

You can identify rust disease pathogens by the color that gives them their name.

If your asparagus plants start looking like they have a layer of metal rust on them, you know you are in trouble.

This fungal disease can be controlled by some cultural methods, but by the time you see the rust, the infection will already be widespread in your plants.

You know how algebra was the bane of many people’s education? Well, rusts were one of mine. They are just so… complicated!

Members of the Puccinia genus, a single species of rust can have four or five different types of spores that look entirely different and cause differing types of infections.

In one way, and one way only, this type of rust is simpler than many other kinds of rusts: It only affects asparagus!

Most other kinds of rusts may also live on alternate hosts, which makes their control even more difficult.

Let’s start in the fall, since you can easily detect the kinds of spores produced at that stage. They are called teliospores, and they are dark black.

The fungus overwinters with these kinds of spores and they are visible as black thickened lesions on dead foliage or debris.

If you see these spores, this is a clear indication that you will have to take action to save your crop.

In the spring, the fungus produces another type – basidiospores. To make life more difficult, these highly infective spores are colorless!

The basidiospores spread by being blown by the wind or splashed by rain. The spores germinate and give rise to new infections evidenced by light green oval lesions.

This is the classic rust color stage, and now the trouble really begins.

The lesions produced by the basidiospores become sunken and look like blisters. They contain orange-colored aeciospores.

These blisters will burst and spew their spores onto the surrounding plants. At this point, the infection spreads rapidly, since these kinds of spores are also spread by wind and rain.

The presence of water helps the infection along, and the spores infect the plants through wounds or stomata, pores in the leaves that exchange gases into the air.

Now comes the epidemic phase, as new infections develop on the leaves. This stage is responsible for most of the damage to the foliage.

Symptoms during this phase are really noticeable, with brick red coloration due to the growth of urediniospores.

And as if that weren’t bad enough, they produce new generations every 10 to 14 days. Wind and rain also spread these spores.

If water is present from dew, rain, or overhead irrigation, the spores can infect other plants.

Since water is essential for the dissemination of this pathogen, rainy weather will have a significant effect on the ability of rust to spread between plants.

The situation is the most dire when short periods of rain alternate with warm, dry conditions with temperatures above 59°F.

The severity of an asparagus rust infection can vary a great deal from one year to another because of changes in environmental conditions.

Effects on the Plants

Several dreadful things can happen if your plants are infected with this pathogen. One is that the foliage can turn yellow or brown and die prematurely. This may stunt and kill young plants.

Stunted plants do not photosynthesize as well as healthy ones, so they produce substantially fewer carbohydrates. This reduces the quality of the spears. If you sell your harvest, it makes the crop less marketable.

Plant breeders have created many varieties of asparagus that are resistant to rust.

However, this type of resistance can break down fairly quickly, and the pathogen can once again cause disease under the right conditions. Therefore, you need to stay vigilant.

A number of resistant varieties have been released over the years, including:

After you harvest your asparagus, cut the spears back to below the soil level. If you live in a cold climate, leave the fronds in place, and wait to cut them back in the spring.

To keep the teliospores from overwintering on your plants, burn the residue before the spears emerge in the spring. This will reduce potential sources of infection for the following season.

If burning isn’t permitted in your area, bag up the plant debris and remove it from your property. Do not put the remains in your compost pile! 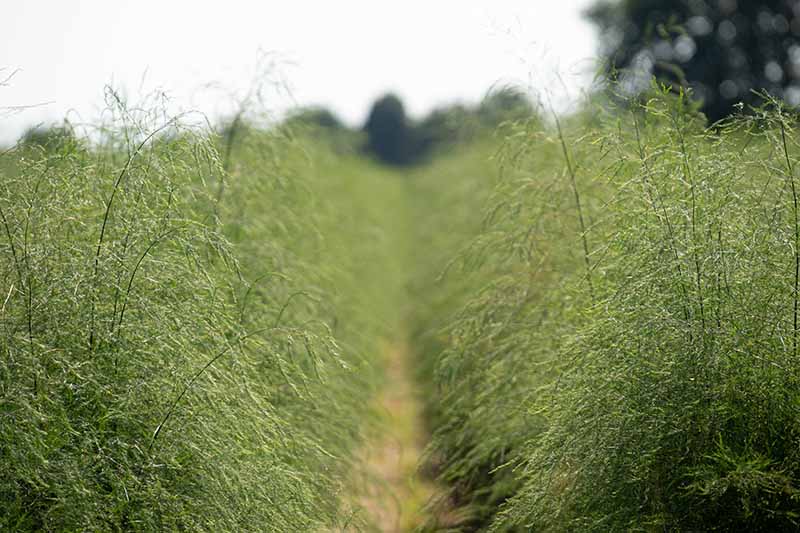 There are other steps you can take as well, to help protect your plants:

Before you reach for a synthetic chemical fungicide, know that there are some microbes that are highly effective at killing pathogens that may be used in the garden as well. These are known as biofungicides.

CEASE is one such product that has been shown to provide some control of asparagus rust.

This biofungicide contains a powerhouse species of bacteria known as Bacillus subtilis that can kill pathogens and improve the ability of the plant to naturally fend off microbial invaders. 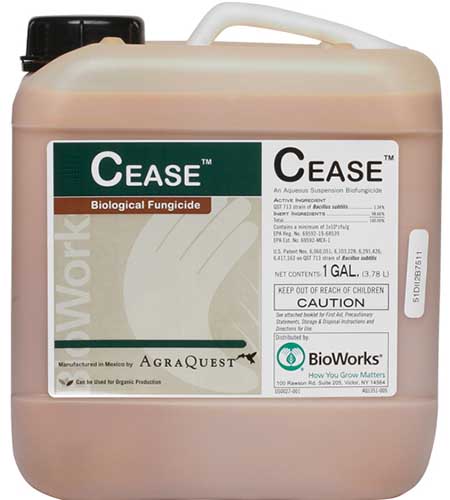 You can buy CEASE Biological Fungicide available from Arbico Organics.

There are a number of fungicides that you can apply after you have harvested the spears, including Myclobutanil, available as Monterey Fungi-Max from AmericanGardeningSolutions on Amazon, and Chlorothalonil, available as Bonide Fung-onil Concentrate from Tractor Supply Co.

A Common Threat for Over Two Centuries

Asparagus rust spread to the United States 91 years after its naming in France in 1805. From there, it has become a threat in every part of the world that grows this crop. 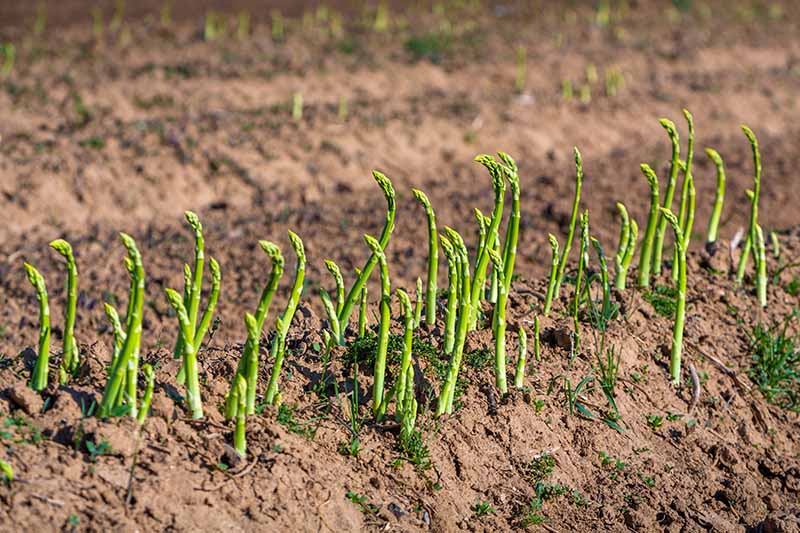 Sanitation is a key measure to reduce the severity of the disease, and CEASE can serve as an effective biological control agent against this pathogen. Fungicides are also an option.

Have you battled asparagus rust in your garden? If so, let us know how your plants made out in the comments section below.

And read on for more information about growing asparagus in your garden: