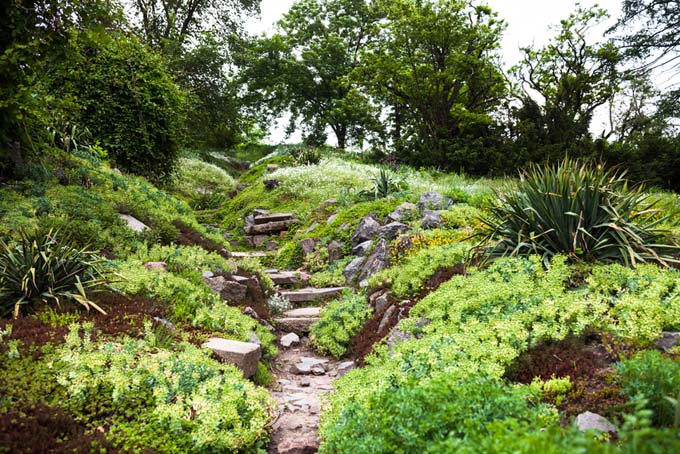 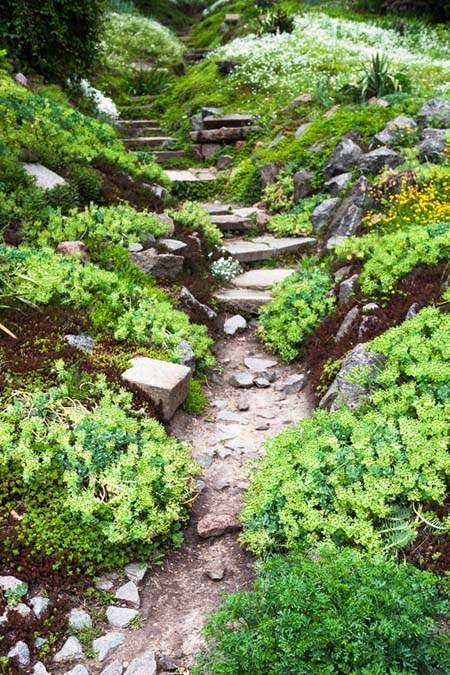 We arrived here in rural Rhode Island in time to catch the end of spring, and now summer is slipping into autumn. In these three months I can’t say that I have metamorphosed into a master gardener like Penelope Hobson or that our five New England acres in any way resemble the great gardens she created at Tintinhull.

First of all, I have learned something about proportion. I remember that when I first started gardening in Baltimore, everything I planted in our townhouse garden outgrew its space by summer’s end.

Every August, my husband would complain that our garden was beginning to look like a jungle.

However, this spring when I began planting the flats of impatiens, coleus, and begonias that had filled the spaces between perennials in our city garden with color, they just sat in these large beds like displaced persons, looking lost and forlorn.

So, in July I stopped planting and instead began to look at neighboring gardens – and more importantly, to explore our own landscape.

The daylilies and plantain lilies were just coming into bloom.

As I raked several years’ accumulation of oak leaves from under the shrubs, I began to discover their shapes and to uncover clumps of small late-blooming plantain lilies, ferns, and rocks covered with moss and lichen. Like in Japanese gardens, these rocks are the true foundation of our New England garden.

During a late summer visit, my son and I decided to dig a 12-by-8-foot plot where I could overwinter some of the herbs and perennials that spent the summer in pots.

We never expected that to hit rocks every time we tried to sink a spade into the ground. We eventually got used to the clink of metal against stone and quickly realized that we were not “digging” a garden, we were excavating a pit from which we removed 30 or so rocks and small boulders.

Into the hole we poured almost 400 pounds of top soil, humus, and manure! Yet the experience was a good one. We used the rocks to build a rockery along the back of our garden, which gives our plot more character and interest.

As my son said, “You never really belong to a place until you have dug in the ground and have come to understand the earth on which you stand.”

I thought of the prominence the Japanese give to rocks while I was working on the hillside garden behind our house. To get there you have to climb a set of stone steps and the soil itself is composed mostly of sand between rocky outcroppings.

Right now the sunny part boasts nothing but weeds, among them a few goldenrod, and one brave locust sapling clinging to the soil between two rocks. The shady end is more fortunate; with the leaves raked away and some careful watering, the big old mountain laurel bushes and the underplantings of azaleas are thriving.

Moreover, there is a carpet of soft green moss growing between the large rocks that edge the bank and along the stone steps that lead to nowhere, alongside the bed of annuals and hardy mints and sage that I planted there in early June.

Still, even there the soil is poor and sandy and the task of getting topsoil up the steps to that inaccessible site is daunting.

In addition, between the house and the rocky hillside is a 20-foot-wide expanse of gravel, which the previous owners put there as a dog run for their Sheltie. I don’t really mind the gravel but my husband hates it.

So I have spent the summer reflecting on the problem while watering my small garden, and the moss-covered rocks and steps nearby.

I have ambled along the semi-circular expanse that forms our backyard late in the afternoon and finished a cup of tea sitting on a rock listening to the wind and watching yellow swallowtail butterflies, the late summer monarchs, and the ruby-red dragonflies that have begun to appear.

Finally, a simple solution has come to us as we have begun to know the terrain and to appreciate what is beautiful in it. With the trees as a backdrop (I’ll talk more about them in my next column), we will work to enhance the character of our rocky slope.

We’ll leave all the rocks in place and encourage the moss to grow around them. In the spring we’ll transplant ferns from our woods and add violets and other shade-loving native plants so that the shady section will look cool and inviting.

In the sunny section we will do what we can over time to improve the soil by incorporating leaves and the compost I am creating in a bin outside the back door.

Rather than trying to grow perennials that need a richer loam, we have decided to plant wildflower seeds after weeding the area and working the soil to a depth of only 1 or 2 inches.

Working the soil too deeply encourages weed seeds to grow. And besides, with all the rocks, digging is impossible. We are taking the path of least resistance, and by using what we have available, we hope to create an area of natural beauty. 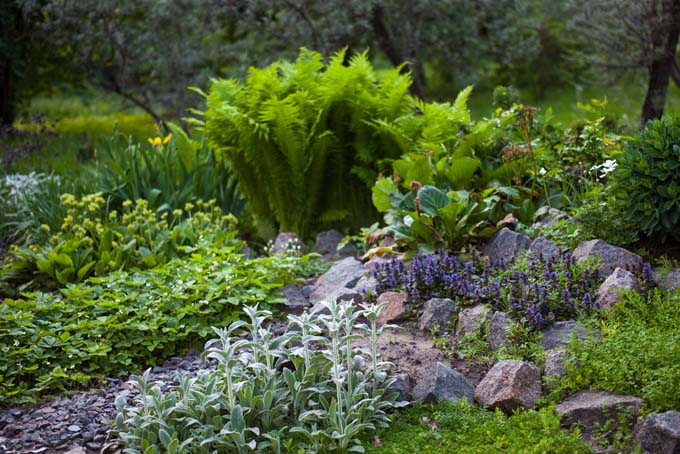 We’ve even decided to leave in place because, in a sense, it seems to be right for this rugged terrain, softened only by the green of moss and the background of trees.

At the shady end we plan to build a simple deck where we can put a table and chairs for outdoor suppers. The sunny part was more of a challenge until my husband said, “I have an idea. We’ll make a Japanese zen garden.”

Landscaping that Withstands the Test of Time (or Not)

So, with sand and one or two rocks from an old stone wall that has fallen into disuse at the edge of our property, we will complete the landscape. The addition of a tree or two (perhaps a small Japanese maple, a dogwood, or a small witch hazel) on the hillside will soften the vista.

We can do all of this slowly, and most of it – the trees, the wildflowers and the moss-covered rocks – will endure like nature itself. The zen garden is ephemeral like all human creations.

I like the idea that nature, in the form of rocks and trees, will live after us whereas the zen garden is transitory as we are, and it will change with the arrival of the next generation of homeowners.

To read more about using native plants in your landscaping, check out this article on xeriscaping.

What challenges have you faced in your garden, and what areas are your favorite? Let us know in the comments! 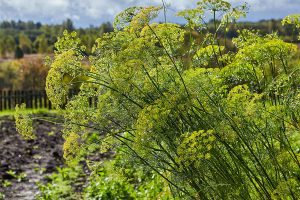 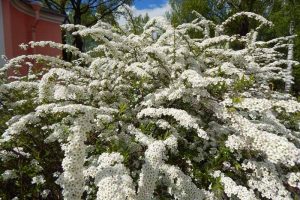