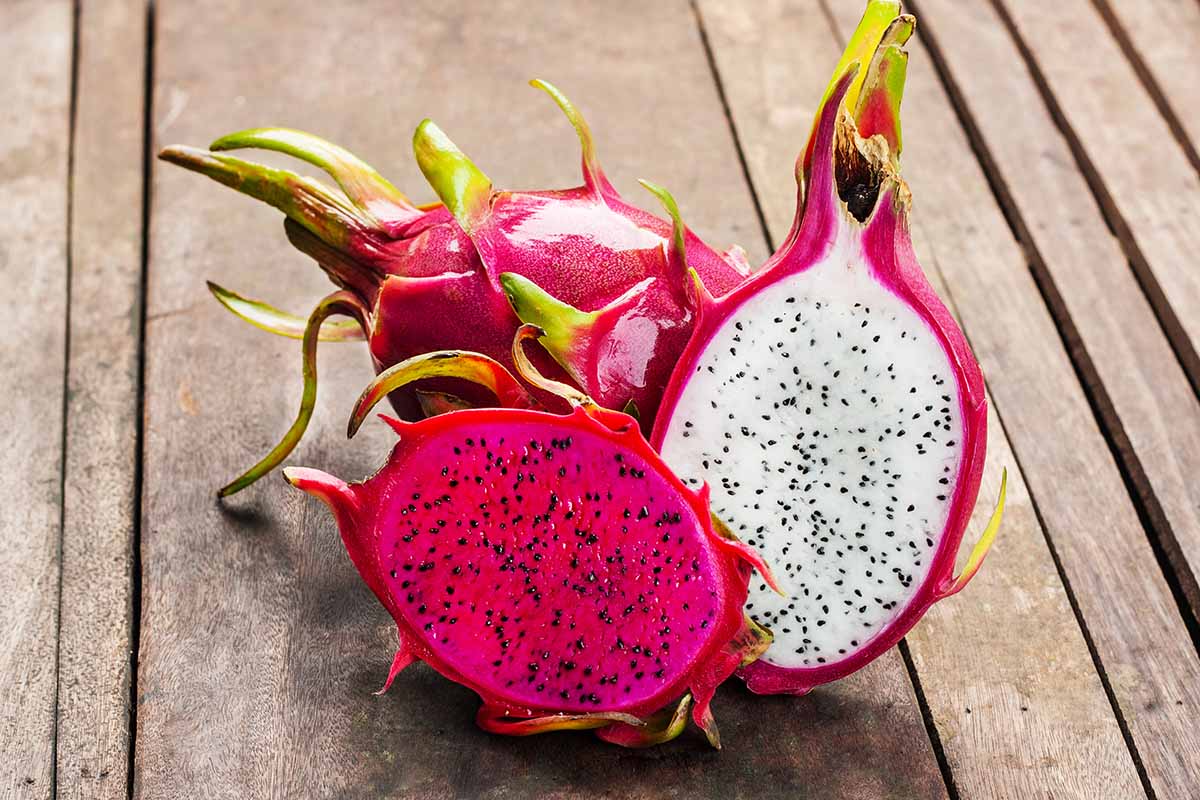 So, when you grow them at home, you’ll want to choose the best one for your growing conditions – and your taste buds!

Whether you want to grow small, sweet, yellow fruits, big and tangy red-fleshed ones, or something in between, you have plenty of pitaya varieties to choose from.

In this article we’re going to learn about 11 of the best dragon fruit varieties – some of which have flavor profiles and pulp colors that might surprise you!

Before we dig into the details on these varieties, you might want to review the growing requirements for this fantastic tropical delicacy with our complete guide to growing dragon fruit.

Our first pitaya selection, ‘American Beauty’ is a cultivar of Selenicereus guatemalensis, a jungle cactus species from Guatemala.

The fruit of this variety has red skin with green bracts. This thin skin encloses startlingly bright, magenta-colored flesh.

With its soft, juicy pulp, ‘American Beauty’ is a top-ranking pitaya cultivar that has excellent flavor.

And when this variety had its sugar content measured on the Brix scale – a method of determining sugar percentage by weight – it scored 18.51, which means its flesh is definitely sweet.

The fruits of ‘American Beauty’ are round and weigh half a pound to one pound each.

This self-fertile dragon fruit variety is harvested from June to November and requires some shade. It’s less tolerant of full sun then some cultivars. 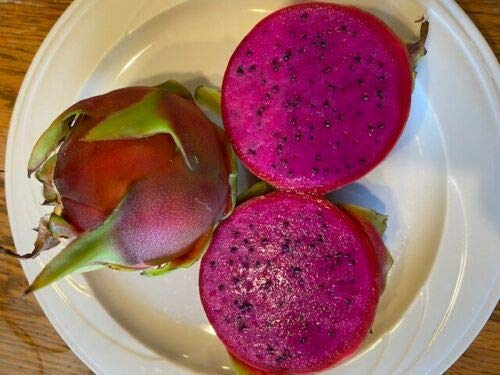 Rather start with a live plant? You can purchase a trellised ‘American Beauty’ in a three-gallon pot from Fast Growing Trees.

‘Colombiana,’ also known as ‘Yellow Dragon,’ is a cultivar of S. megalanthus, a pitaya species native to northwestern South America that is known for its delectable, yellow fruits.

The fruits of ‘Colombiana’ are small with spiny, thick, yellow skin. Its flesh is white and semi-translucent with a firm texture, and is studded with large black seeds.

Although the fruits of ‘Colombiana’ are spiny, its spines are easy to remove – and the extra effort is well worth the pleasure of enjoying its sweet flesh.

These small, oblong pitayas weigh in at about five ounces each (or under half a pound) and are extremely sweet with a Brix score of 21.

This variety is self-fertile and is harvested from late fall into winter, usually from November through February.

‘Colombiana’ plants are a bit sensitive – they don’t like cold, heat, or full sun, and are prone to rust if exposed to too much rainfall.

This dragon fruit variety has a very long ripening period – up to 180 days after pollination – and cultivating it is best reserved for gardeners with some previous pitaya-growing experience.

The pulp of ‘Dark Star’ has excellent flavor with grape-like undertones, and it is sweet, with a Brix score of 19.

These pitayas are medium to large, weighing in at three-quarters of a pound to one and a half pounds.

The blooms of ‘Dark Star’ are self-sterile, requiring cross-pollination with another cultivar. The plants are very productive and grow quickly. 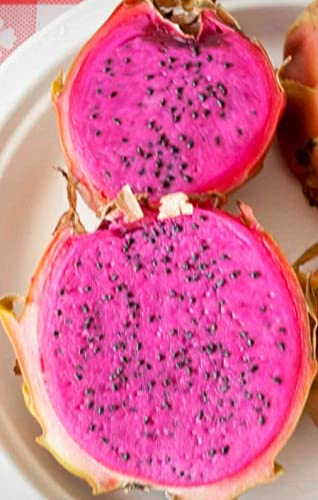 To harvest your own crop of ‘Dark Star,’ you can purchase packs of two eight- to 12-inch cuttings via Amazon.

Just like the music icon this variety is named after, the pitaya cultivar known as ‘David Bowie’ excels at nearly everything. The plants are strong growers, productive fruit bearers, and produce pitayas with extraordinary flavor.

This ‘David Bowie’ is a cultivar of S. undatus, a dragon fruit species whose native range extends throughout Central America.

Fruits have pinkish-red skin covered with numerous green bracts. Inside you’ll find white flesh that is sweet and tangy.

This variety’s oval-shaped fruits have more bracts than average and are medium to large, weighing approximately one pound each.

Plants are somewhat slow growing but produce flowers that are self-fertile and self-pollinating. (See? I told you this type excelled at nearly everything.)

What could be more of a delight than a pitaya fruit with sweet, light pink flesh?

‘Delight’ produces medium-sized, oval fruits that have greenish-red skin and pulp that has a Brix score of 18 or higher.

The plants produce small spines and are vigorous growers, with slightly improved heat and cold tolerance compared to other varieties.

‘Delight’ does fairly well in full sun, and produces flowers that are self-fertile.

The fruits of this pitaya cultivar are ready to harvest between June and December. 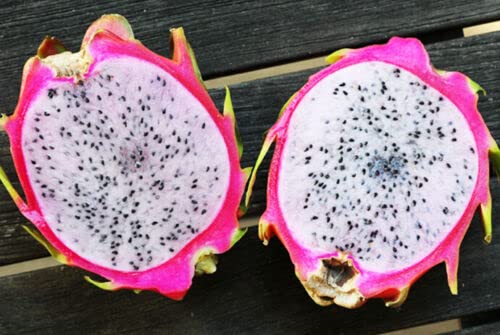 Stare too long at a dragon fruit and you might imagine it as a ball of fire – or perhaps a comet!

‘Halley’s Comet,’ a hybrid of S. undatus and S. guatemalensis, is a pitaya cultivar with skin that is bright red to pink and fairly thin, with green bracts.

Fruits are round and large, weighing one to two pounds each, containing magenta flesh that is not overly sweet, with a Brix score of 16.7.

The flowers of ‘Halley’s Comet’ are self-sterile, requiring cross-pollination.

So, not too sweet, self-sterile, requires cross-pollination? What, you might ask, is this dragon fruit cultivar doing on this list?

And now we come to some of the undeniable advantages of this variety, which make it a popular choice for growers: the slow-growing plants are strong, tolerant of full sun, and have improved heat and cold tolerance.

‘Halley’s Comet’ is ready to harvest from July to December. 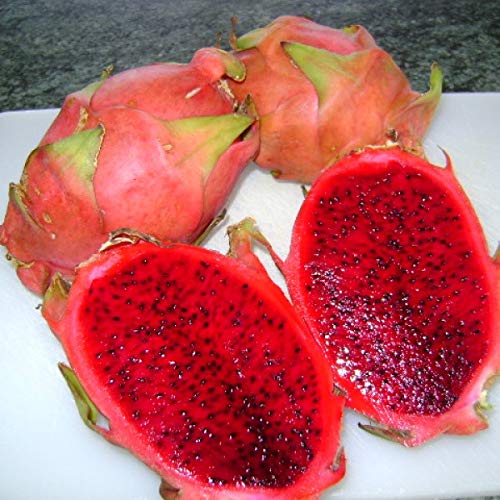 Add this “ball of fire” to your own constellation of dragon fruit cultivars. You’ll find packs of rooted ‘Halley’s Comet’ starter plants available for purchase via Amazon.

This pitaya’s name is ‘Lisa,’ but we might as well call her Mona Lisa, because this variety’s fruits are works of art.

A cultivated variety of S. monacanthus, this Nicaraguan type bears one of the most attractive pitaya fruits out there – these have thick red skin and curling green bracts that have striking, dark red margins.

And with ‘Lisa,’ the beauty isn’t only skin deep.

The flesh of this cultivar is a rich, dark red hue and the taste both sweet and acidic, making it extremely flavorful. ‘Lisa’ has been rated with a Brix score of 18.

In fact, in a blind taste test conducted at the University of California at San Diego Cooperative Extension, ‘Lisa’ received one of the top rankings among pitaya cultivars for flavor.

Not only does ‘Lisa’ have great flavor, its flesh has a pleasantly smooth consistency, packed in oval-shaped fruits that weigh in at one pound each.

The flowers of ‘Lisa’ are self-sterile, requiring cross-pollination, and plant stems have a grayish coating that contributes to this plant’s increased heat and cold tolerance.

‘Lisa’ is ready to harvest between June and January.

Like the Led Zeppelin album this hybrid is named after, ‘Physical Graffiti’ is prolific and impressive.

A cross of S. guatemalensis and S. undatus, this pitaya cultivar has bright, pinkish-red skin that is fairly thin with green bracts.

Its flesh is light purple to magenta and it has excellent flavor, with a Brix score just under 18.

Fruits are oblong and medium to large, weighing up to a pound and a half each. They’re produced from flowers that are self-sterile and require a red-fleshed variety as a pollinator, so choose one of these to plant nearby.

Plants thrive in full sun and are vigorous and productive, with improved tolerance to both heat and cold.

But just like a guitar solo that goes on a little too long, ‘Physical Graffiti’ is a bit aggressive, and this variety will require a bit more pruning than others.

(Yes, sometimes it is possible to have too much of a good thing – but that’s okay, with this cultivar you can plan to give cuttings to your friends!)

‘Physical Graffiti,’ the pitaya, is harvested from July to December. 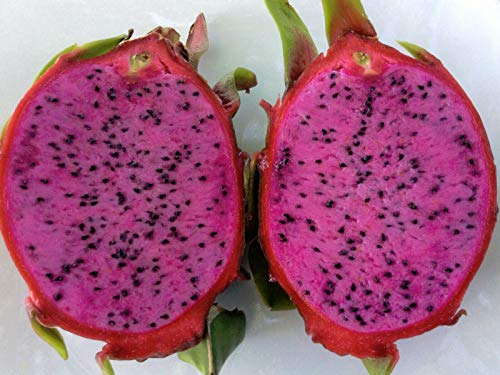 Here’s the perfect pastime for listening to your favorite Led Zeppelin albums – pruning your own dragon fruit plant while you rock out. You’ll find sets of two eight- to 12-inch ‘Physical Graffiti’ cuttings available for purchase from Amazon.

Have you noticed a trend in where pitaya hybridizers must find their inspiration for naming their creations?

Well, let me introduce you to our next variety.

‘Purple Haze’ is not just one of the most well-known Jimi Hendrix tunes, it’s also a fruit you can eat.

A hybrid of S guatemalensis and S. undatus, this pitaya hybrid has pink skin with green bracts, and contains purple flesh.

Its purple pulp is very sweet with hints of grape and kiwi and a Brix score of 19, enclosed in oval-shaped fruits.

These dragon fruits are large, weighing in at one to two pounds each, and born from self-sterile flowers that require cross-pollination.

Like our previous hard-rock-inspired selection, ‘Purple Haze’ grows aggressively, so make sure you have a good pair of pruners.

Departing from iconic rock and roll references, our next pitaya variety is known for its high fruit production and ability to serve as a cross-pollinator.

‘Sugar Dragon’ is a cross of S. guatemalensis with an unknown species.

Its pulp has excellent flavor with rosewater or berry undertones, and it is sweet, with a Brix score of 18 or higher.

Fruits are oval-shaped and weigh eight to twelve ounces each (or one-half to three-quarters of a pound), borne on heat-tolerant plants that display robust growth.

‘Sugar Dragon’ is a self-fertile and self-pollinating dragon fruit. It can be used to pollinate self-sterile dragon fruit varieties and is considered by some professional growers to be a universal pollinator. 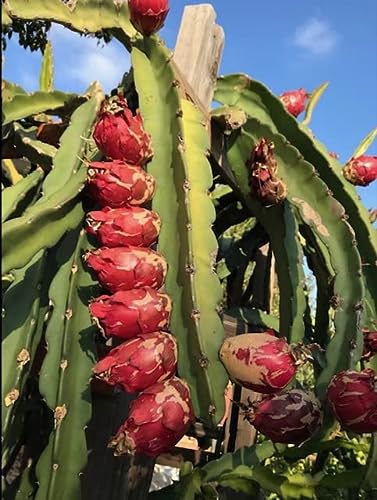 You’ll find seven- to 10-inch cuttings of ‘Sugar Dragon’ in packs of two, available for purchase via Amazon.

Our last pitaya selection in this roundup, ‘Yellow Thai’ is a hybrid of S. megalanthus and S. undatus, and it has a unique appearance.

This cultivar has skin that is a lovely, soft pink hue with yellow bracts.

Because of its S. megalanthus parentage, which also imparts its yellowish coloring, you’ll find spines at the base of the fruit.

‘Yellow Thai’ has white flesh that is both sweet and tart, with a flavor that reminds some of pink lemonade, and a Brix score of 18.5 or higher.

Unlike the small, yellow fruits of ‘Colombiana,’ the oblong fruits of ‘Yellow Thai’ pitayas are large, weighing in at over a pound each.

The flowers of this variety are self-fertile and self-pollinating, meaning you will be more likely to get a harvest without hand-pollination – though hand-pollinating nonetheless will increase your yields.

‘Yellow Thai’ is tolerant of heat as long as plants are kept in part shade, but it is not very cold tolerant.

A Fantastic Flock of Dragons

With so many fabulous options, maybe you’ll soon be growing your own grove of pitayas. Or call it what you will, a flock of dragons, a rock and roll orchard of fame – it’s up to you!

Which pitaya varieties are you thinking of growing? Do you have any other dragon fruit favorites we didn’t include in this list? Let us know in the comments section below.

And if you’re keen on increasing your knowledge of edible and medicinal succulents you can grow in the garden, you’ll find more to read right here: 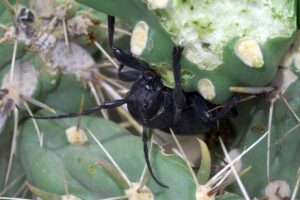 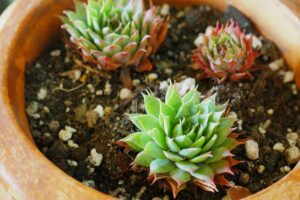 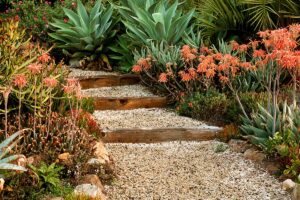 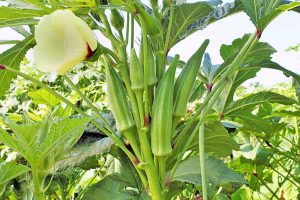 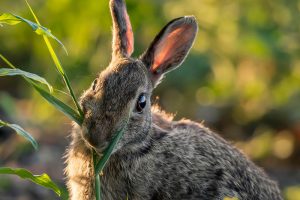