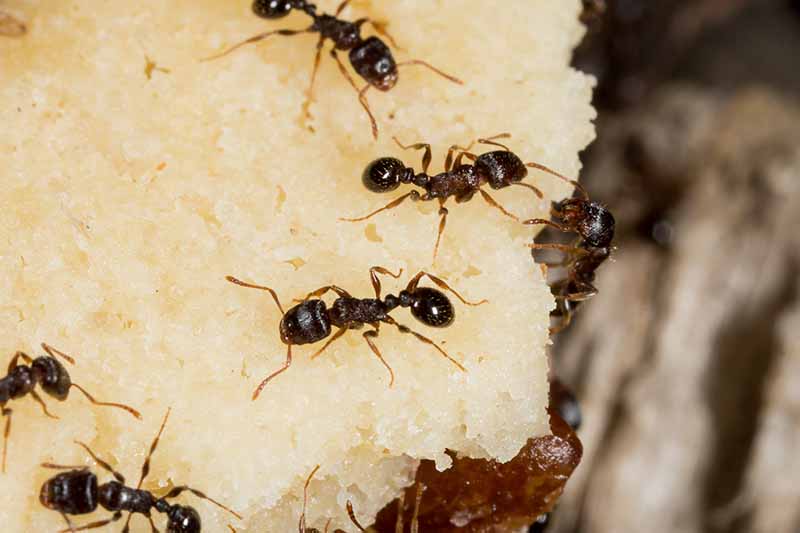 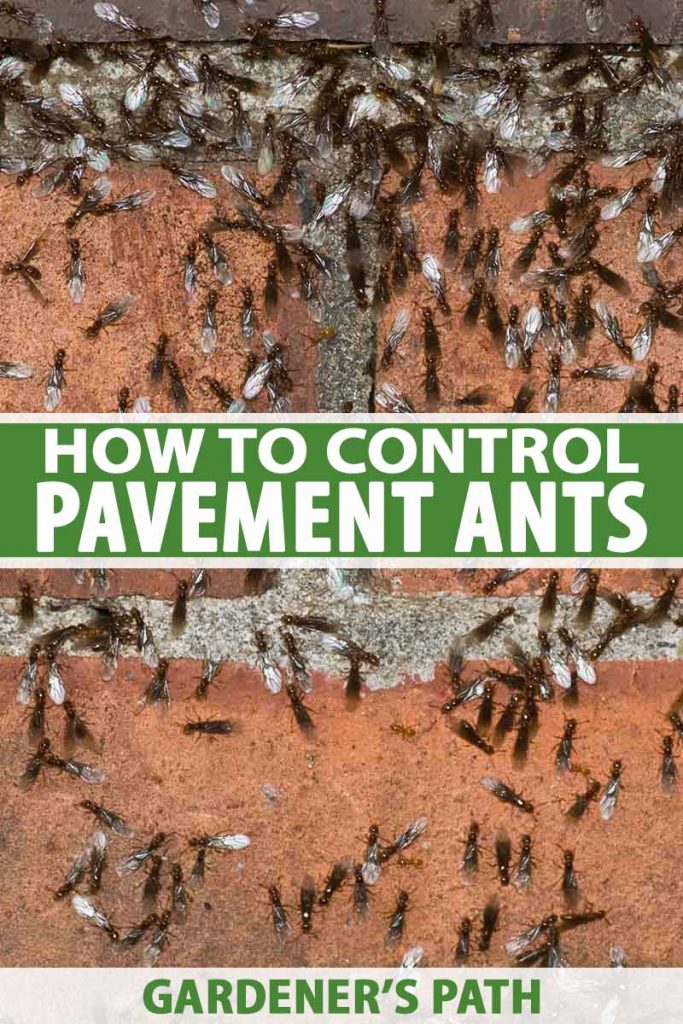 At some point you’ve probably noticed tiny little piles of sand and soil next to pavements, sidewalks, or near the edge of buildings. This displaced dirt is likely to be the handiwork of pavement ants.

Although originally from Europe, these pavement pests have made themselves at home in much of the US and have become one of the most common types of ant here.

Usually nesting under pavements – hence their name – they can also cause significant problems in houses by setting up residence in concrete slab foundations and inside your home.

We will give you the background on these pests and how to control them.

First and foremost, how do you know you have pavement ants? This particular type is frequently confused with the dreaded odorous house ant, which is also found throughout the US. 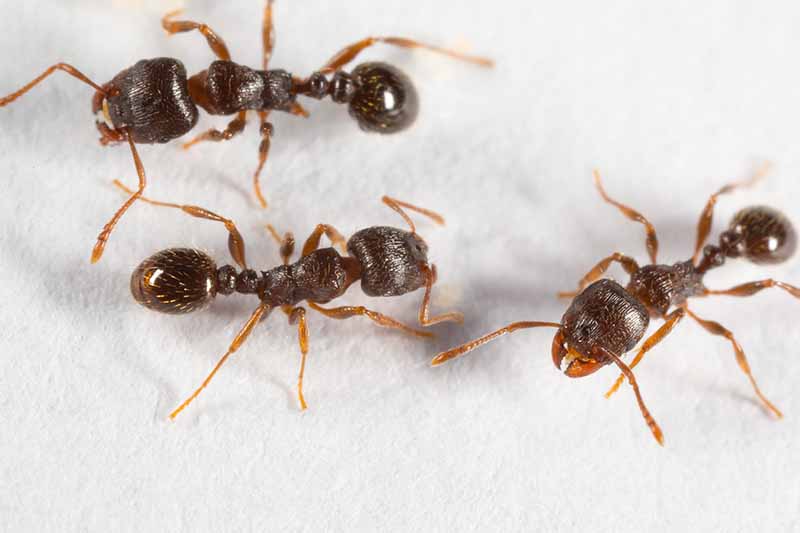 Both types are dark brown to black in color, and are about 1/8 inch long.

Helpfully, they leave little piles of soil or sand beside driveways, patios, and paving stones, giving you a clue not only to their presence but also the location of their nests. 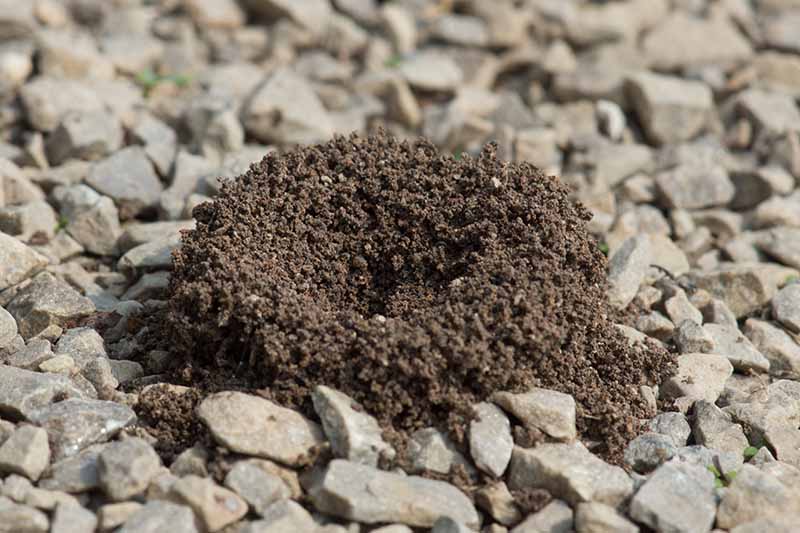 Most active at night, you’ll frequently find them making their way across your kitchen floor in search of the sugar bowl, or enjoying leftover pet food.

They also smell acidic when crushed, while the odorous house variety smells like rotten coconuts.

Pavement ants are not native to the US but are thought to have been brought over on ships from Europe in the 1700s and 1800s.

The ships contained soil as ballast, which was removed and dumped in the US, freeing up space for the ships to carry goods back to Europe. It turns out that this was a very effective way of introducing these pests to the country.

Since then, they have been successful in colonizing much of the US.

Today, they are found all the way from New England to the Mid-Atlantic. They are common in the Midwest and are sometimes found in the southern states, parts of California, and Washington as well.

Pavement ants get their name because their colonies are frequently found nesting in pavements, sidewalks, driveways, or patios. They leave characteristic mounds of sand or dirt near their nests. 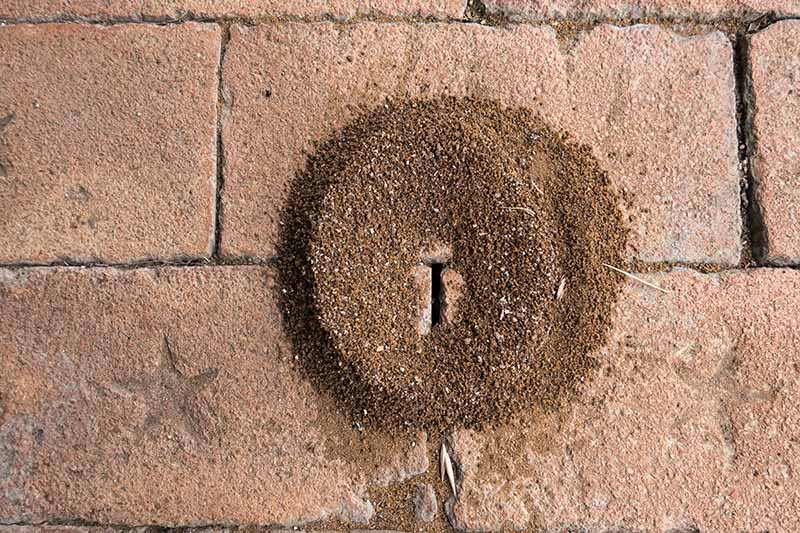 It’s not just pavements that provide a home for these pesky insects, they also set up nests in lawns, gravel pathways, or under floorboards.

Their colonies have multiple queens and many workers.

These ants will swarm – sending winged ants that are twice as large as the workers out of the nest to mate and form new colonies. While they usually swarm in the spring, they can do so throughout the summer, and even through fall and winter in heated buildings.

New colonies start when a queen first lays eggs. It takes about 2-3 months for the workers to mature, at which point they’ll start looking for food.

Pavement ants are not fussy about their diet. They will feed on fruit, nectar, honeydew from aphids, dead insects, and small seeds. They are also partial to most of the food found in your kitchen – and your pet’s food, too. They are attracted to meat, dairy products, bread, and even grease.

They frequently enter dwellings through cracks in floorboards, interior slabs, and the foundations of buildings. You can often tell that an infestation is in progress when you find telltale piles of sand and soil at the top of the foundation walls, or near cracks in concrete slabs. 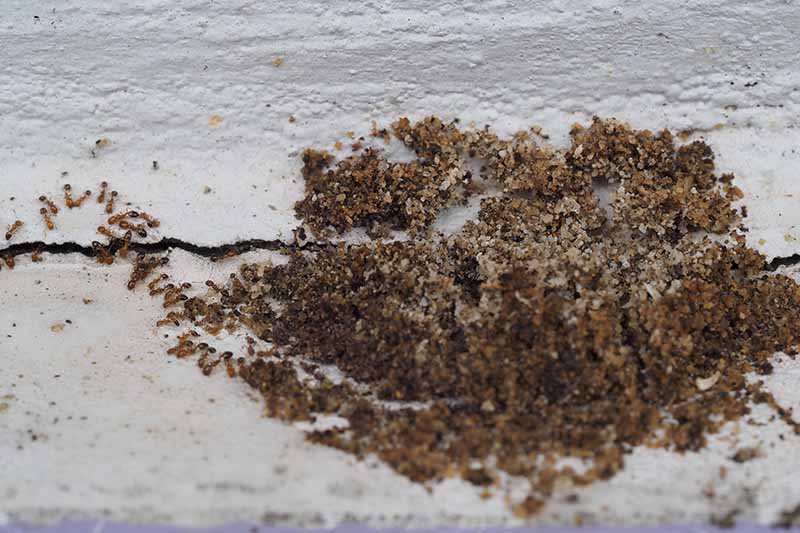 Once inside, they will make their nests under floors, in wall or attic insulation, under carpets, and in moist places such as under sinks or by toilets. You should look around baseboards and edges of carpets if you suspect an indoor infestation.

Like with most ants, insecticidal baits are the best way to control an infestation.

You will not be able to completely eradicate an ant infestation unless you destroy the colony by killing the queen. 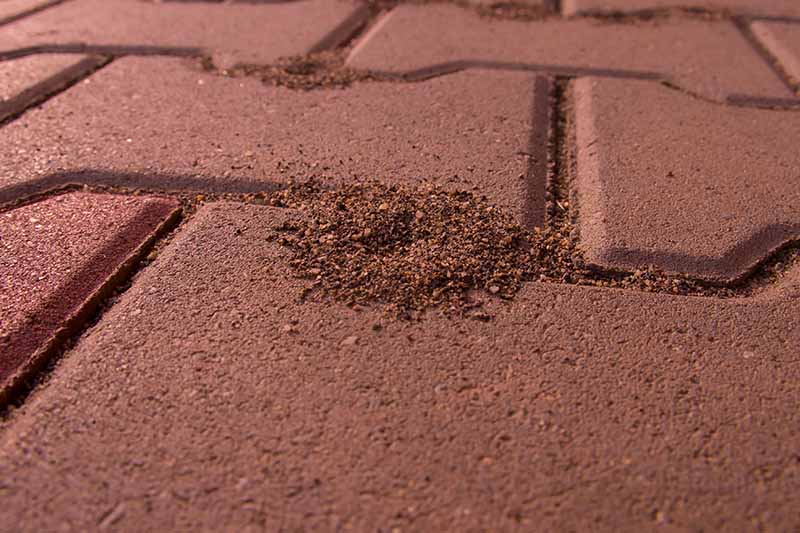 This is why insecticidal sprays are often ineffective. They will simply kill the visible workers, but a short time later, new ones will be back to take their place. However, when you use an insecticidal bait instead, the workers feed on the bait and carry it back to the nest to feed the queen.

Slow-acting insecticide is ideal for this, as it gives the workers time to take the poison back to the colony before they die.

One good thing about the broad diet of pavement ants is that it gives you many options in the choice of trap you can use. Protein- or sugar-based bait stations pre-filled with pesticides are the most convenient. 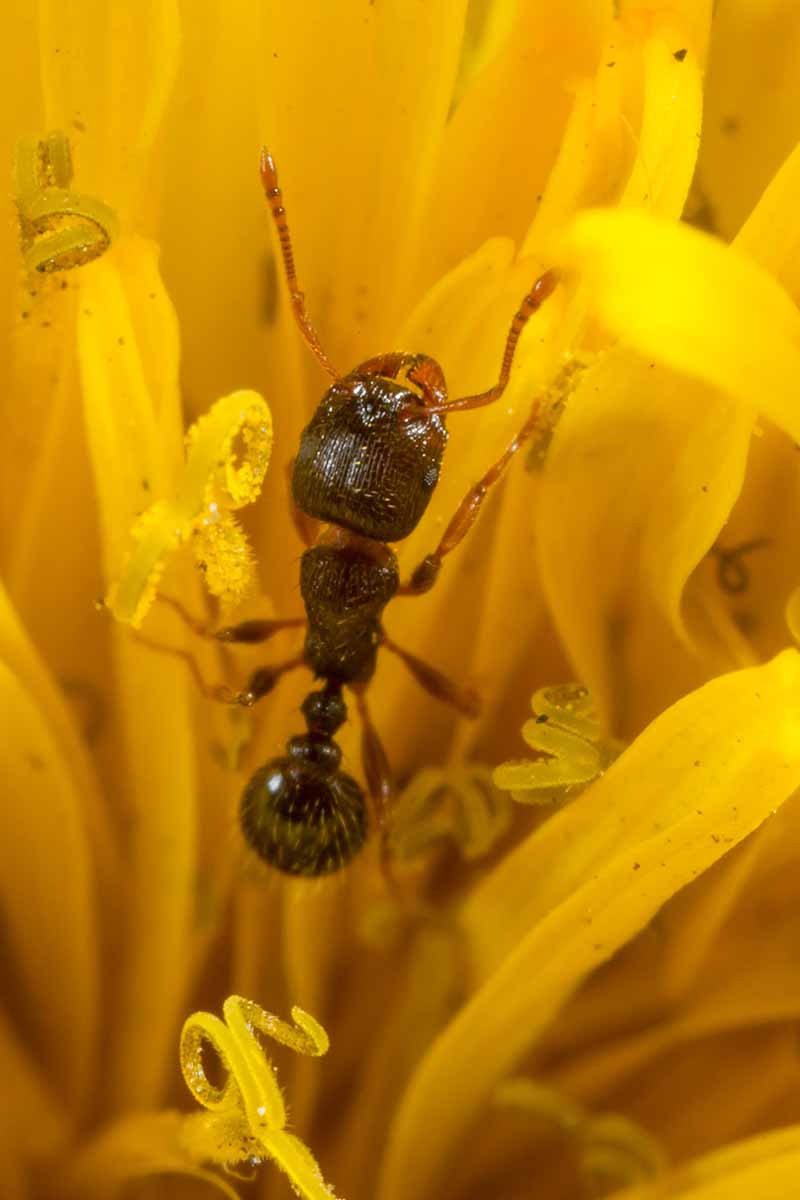 It’s best to use two types of bait at once – one that is sugar-based and one that contains protein.

Slow-acting, non-repellent insecticides for use in bait traps include boric acid, fipronil, and hydramethylnon.

Boric acid has very low levels of toxicity to people but it’s very toxic to insects.

Fipronil is commonly used as a flea and tick treatment for dogs and cats.

You should put the bait near their colonies, if you can find them, or next to their trails.  Often more visible at night, one place to look for trails is around electrical wires and plumbing pipes.

You can also buy insecticidal bait that comes as a squeezable gel, so you can place this directly into cracks in paving stones or foundations.

It can take two weeks or more to control an infestation using bait traps. Fortunately, insects are much more sensitive to the low level of pesticides in these products than people or pets. However, you should still take care when using any chemicals around your property or in your home.

You have a choice of liquid or gel for each type of bait:

Terro brand liquid bait stations containing boric acid are convenient to use along base boards, underneath kitchen counters and appliances, and on windowsills. 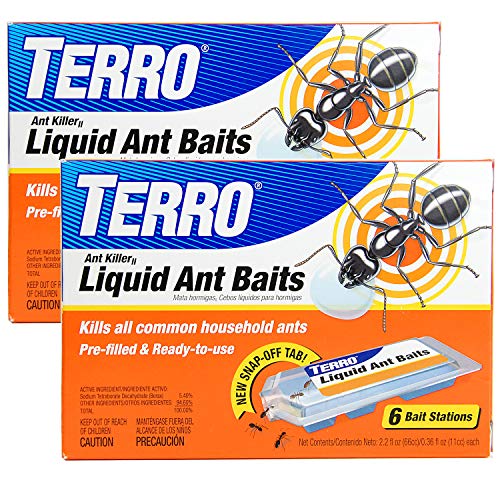 Gel baits can be squeezed directly into cracks in baseboards or paving stones.

Protein-based ant killer comes in gel or as liquid bait stations. Both of these products contain fipronil. 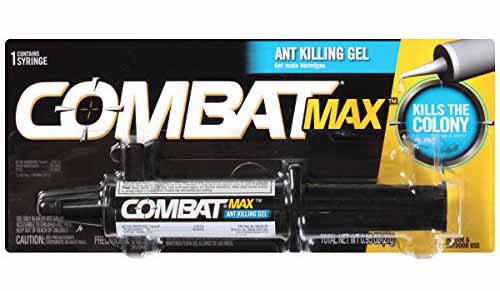 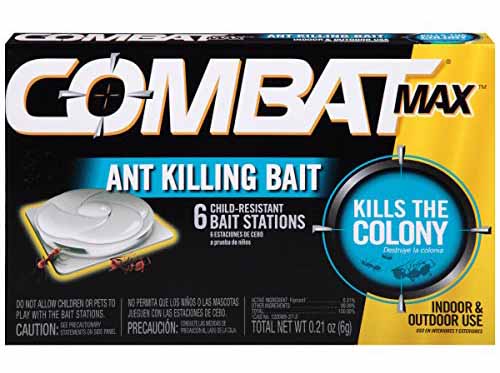 You can also buy six child-resistant Combat Max liquid ant killing bait stations for indoor and outdoor use from Combat via Amazon.

An Invasive But Controllable Insect

Pavement ants are a problem throughout most of the country.

You can spot an infestation by the mounds of soil or sand they leave near their nests. These are often visible in the cracks of sidewalks or paving stones.

They often enter houses through cracks in the foundation or slab, and will eat practically anything.

You can use their greed to your advantage by offering them a variety of baits, which makes them relatively easy to exterminate.

Have you conquered a pavement ant infestation? If so, let us know what worked for you in the comments.

And read on for more information on identifying and controlling infestations:

One of Helga George’s greatest childhood joys was reading about rare and greenhouse plants that would not grow in Delaware. Now that she lives near Santa Barbara, California, she is delighted that many of these grow right outside! Fascinated by the childhood discovery that plants make chemicals to defend themselves, Helga embarked on further academic study and obtained two degrees, studying plant diseases as a plant pathology major. She holds a BS in agriculture from Cornell University, and an MS from the University of Massachusetts Amherst. Helga then returned to Cornell to obtain a PhD, studying one of the model systems of plant defense. She transitioned to full-time writing in 2009.
More Posts
Subscribe
5 Comments
Oldest
Newest Most Voted
Inline Feedbacks
View all comments 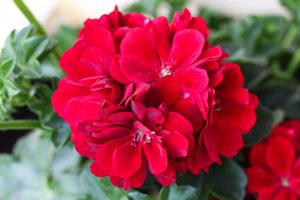 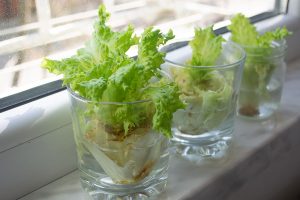