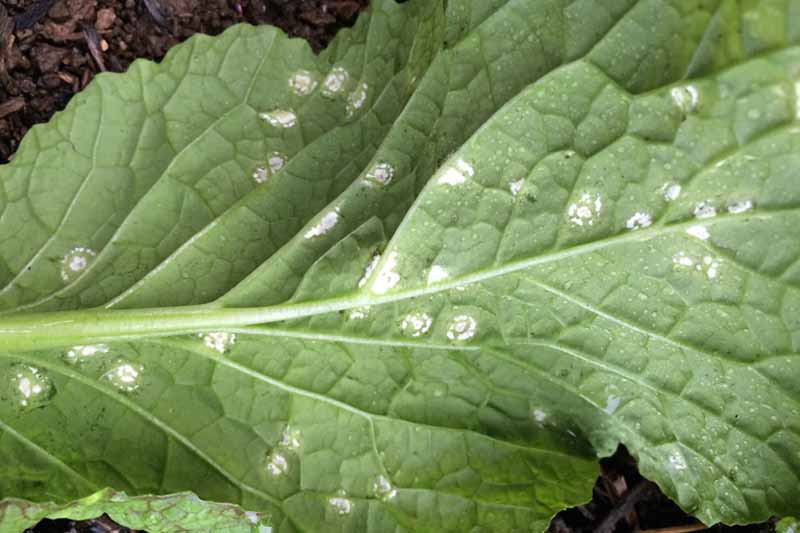 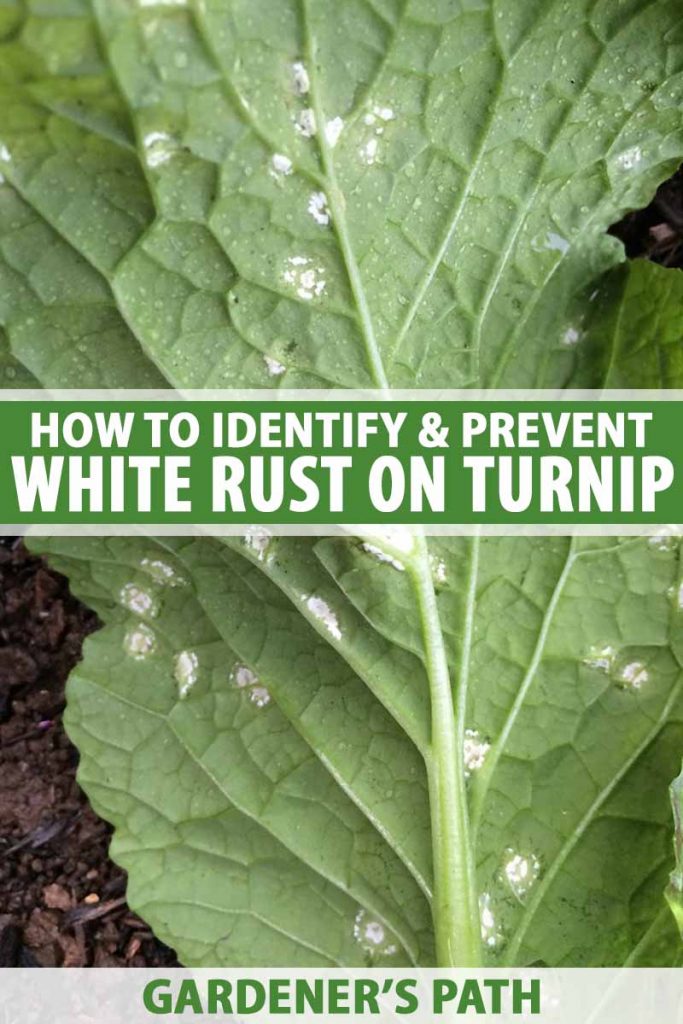 White rust, caused by Albugo candida, afflicts turnip leaves and flowers and used to be considered a fungal disease. However, the organism has been reclassified and is now no longer a fungus. It is a water mold – a relative of brown algae.

However, it looks and acts like a fungus! And it still infects turnips!

You will know if your turnip plant is infected if the bottoms of the leaves have white pustules that look like blisters, and the upper sides have faint yellow spots opposite the white ones.

Rusts don’t kill their hosts, but they don’t do them any favors either. This type of rust is found throughout the world wherever turnips are grown.

As far as plant diseases go, white rust on turnips is not usually a serious disease. The leaves of infected plants look hideous, but the roots are typically fine.

Unfortunately, there are no fungicides registered in the US to control white rust on turnips. You will have to rely on preventative techniques.

We will walk you through the symptoms and life cycle of this disease and cultural methods to control it.

Symptoms of White Rust on Turnips

White rust has both local and systemic symptoms.

The local ones present as white pustules on the bottom of the leaves that look like chalky white dust and faint yellow lesions on top. In addition, smaller stems and floral parts can be infected.

This does not always happen, but If the infection goes systemic (throughout the whole plant), you will see flowers that grow abnormally, are distorted, and sterile.

These disturbed flowers are referred to as stagheads. These structures are typically formed on infected plants during periods of extended rainfall and little sunlight.

How the Infection Spreads

Spores spread from the pustules, including those produced on cruciferous weeds. Wind, insects, or rain disperse them to other plants in the same fields or even in other fields.

The infection is more likely to spread in wet weather that is 60 to 77 F.

Plants can also become infected from thick-walled spores called oospores that are formed in the stagheads and overwinter in plant debris in the soil.

Another downside of this rust is that it can predispose your plants to develop downy mildew(link to turnip downy mildew article), another disease caused by a water mold.

The lack of fungicides registered to control white rust on turnips limits your options to cultural controls. One of the key ones is to buy high quality seed that is produced in a dry climate!

Since the organism can overwinter in plant debris in the soil, try to plant your seed in a well-drained bed that doesn’t have any plant residues in it.

It is important to eliminate any cruciferous weeds like mustard or shepherd’s purse near your plants, since they can harbor the disease. If you can, rotate your turnips with a non-cruciferous crop for at least two years to purge the soil of infective spores.

Try to minimize overhead sprinkling. That will not prevent the rust from causing disease, but it may minimize its severity.

After you have harvested your turnips, incorporate any remaining crop residue into the soil as soon as possible, so it will decompose and reduce the chances of the spores surviving.

While turnip rust produces hideous lesions on turnip leaves throughout the world and sometimes results in distorted flower heads, this organism does not kill its host.

No fungicides are registered to control turnip rust in the US, so you will have to rely on cultural controls like planting quality seed, ruthlessly culling cruciferous weeds, and disking vegetation under after the season is over.

With these techniques, you should be able to minimize your chances of having an infected crop and produce turnips that can be sold with their leaves.

And if you still need help identifying a turnip disease infected your patch, then some of these guides may be of assistance: