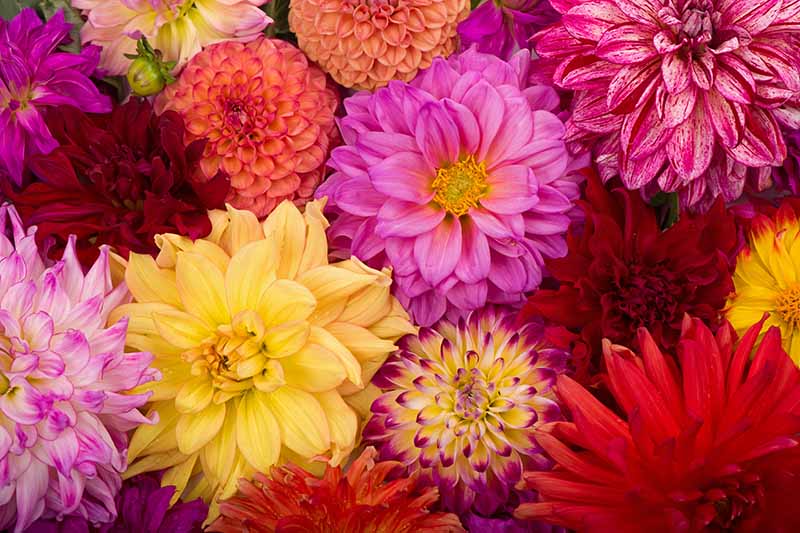 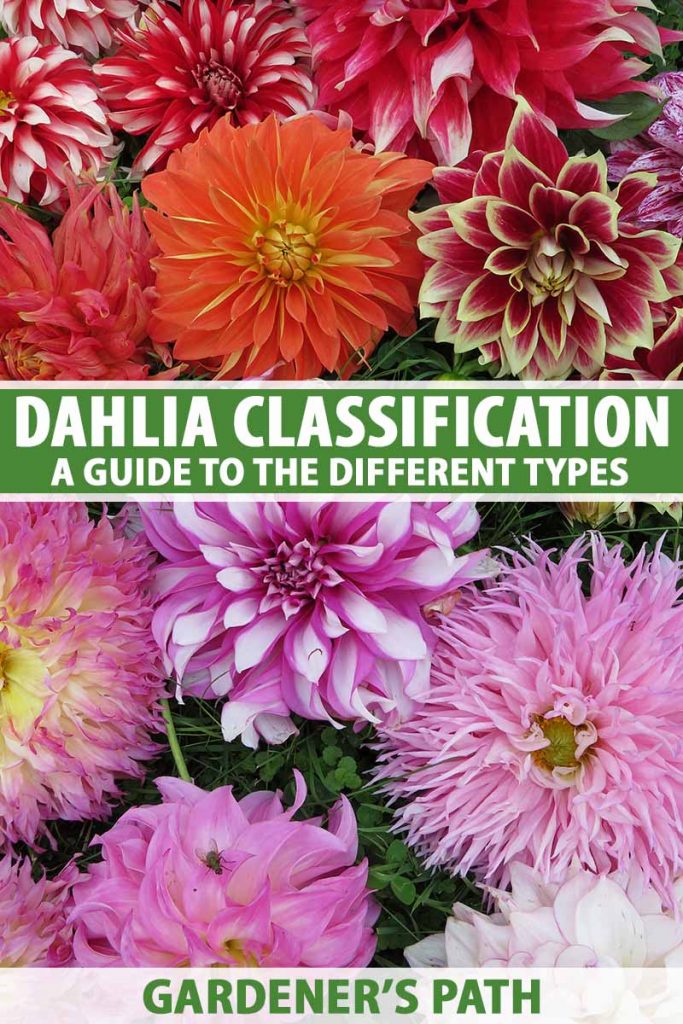 Dahlias are beloved by gardeners and florists for their large array of glorious colors and delightful flowers that range from miniature pompoms to giant dinnerplates!

Flowering from midsummer until the arrival of frost, they add fresh beauty to beds, borders, containers, and window boxes through the dog days of summer – just when other plants start to wear out from summer’s heat.

But with over 57,000 registered cultivars worldwide, choosing a selection for your garden can be a challenge.

The American Dahlia Society (ADS)categorizes dahlias into three groups on the basis of color, form (or flower type), and size.

In our guide to growing dahlias, we cover how to cultivate these beauties. In this guide, we’ll take a look at the different classifications to help you choose the type that’s right for your garden.

With every color available except true blue, you’re sure to find just the right shade for your garden palette.

There are also multiple flower types in the Form group, with different petal structures and bloom shapes.

Anemone (AE) types are distinguished by at least one row of evenly spaced, flat ray petals surrounding a vivid, and often contrasting, pincushion center made of long, tubular florets.

They may also be bicolored, as in the case of ‘Polka Dot’ which features cream colored petals edged in dark pink surrounding a bright yellow center.

Blooms are four to six inches wide, and plants grow to a mature height of three to four feet.

You can find bags of two, four, or eight tubers available at Eden Brothers.

The globe-shaped flowers make a dramatic impact in the garden and in cut flower arrangements.

You can find bags of two, four, or eight tubers available at Eden Brothers.

Cactus (C) types have long, pointed ray florets with petal edges that are involute (IC), revolute (edges rolled back), or straight (SC), radiating out from an open center in a somewhat spiky look.

‘Bora Bora’ is an eye-catching cultivar with bright red to pink flamboyant petals that fade to yellow towards the center.

Adding texture, color, and interest to beds and borders, plants top out at two to three feet tall with large, six- to eight-inch blooms.

Collarette (CO) flowers have a flat, open face with a single outer row of regularly spaced ray florets, an inner collar of shorter petals (petaloids), and a fringed or tight center disk.

The inner collar and center disk are often contrasting.

Two- to four-inch flowers bloom on stems that grow up to three feet tall.

Decorative cultivars are double petaled and open centered, with flat florets that may have a roll at the edges or tips.

With 10-inch dinnerplate flowers in light pink fading to a creamy-white center, ‘Gitts Perfection’ is an Informal Decorative type.

Laciniated (LC) types have uniformly arranged florets radiating from a disk or open center with involute or revolute edges.

A lengthwise split at the tips of the petals gives a fringed or “pinked” appearance like that of a carnation.

Mignon Single (MS) is an open faced flower with a single row of uniform, slightly overlapping ray florets, in a flat plane surrounding a center disk that can be tightly furled or unfurled into a pincushion.

The delicate four-inch flowers are stunning when mass planted in beds and borders, and are available in a variety of colors. Compact plants top out at one- to two-feet tall.

You can find seeds for D. variabilis in a mixed packet of pinks, reds, yellows, and whites available at Eden Brothers.

Novelty flowers have characteristics that fall outside of the other classifications.

Novelty Open (NO) varieties have a disc center. Fully Double (NX) types have an open center surrounded by double petals.

The florets are involute for at least two thirds of their length, giving a narrow, rolled effect.

‘Honka Pink’ is a lightly fragrant Orchid type, with deep pink petals fading to soft pink and white towards their bases, surrounding a bright yellow center.

Four-inch-wide flowers are light and stand erect atop three-foot stems.

Orchette (OT) types are intricate blooms that combine the involute petal characteristics of the Orchid dahlia with an inner fringe of short petals (petaloids) surrounding a center disk typical of the Collarette form.

The petaloids may be flat or slightly curved towards the center of the bloom.

‘Fascination,’ a winner of the RHS Award of Garden Merit in 1994, is a compact Peony type featuring bright pink petals that surround a dark center.

Flowers are five to six inches across on three- to four-feet-tall sturdy stems.

Pompom (aka pompon) types (P) feature an open-centered, fully double flower in a rounded globe shape with rolled, involute florets that are blunt or round tipped.

Flowers are beautifully symmetrical with an appealing geometry.

‘Burlesca’ is a coral-pink cultivar with dainty four-inch flowers that look perfectly symmetrical.

Flower stalks can be up to three feet tall and may require staking.

You can find ‘Burlesca’ tubers available at Eden Brothers.

Single (S), is an open faced flower with a single row of regular, overlapping ray florets in a flat plane surrounding a center disk.

The petals are flat or slightly cupped with blunt or pointed tips, and the center disk opens to reveal frilly anthers.

Stellar (ST) types are fully double flowers with long and pointed cupped florets that recurve back towards the stem, giving the appearance of a shooting star.

Like the Ball types, there is no center disc.

Waterlily (WL) has fully double, symmetrical blooms with slightly cupped florets that open from a domed center to a saucer-shaped face.

Petals are broader and sparser than the Stellar types.

The third group is Size, classified according to letter values.

Like the Color and Form groups, the large selection of sizes offers a good variety of flowers suitable for multiple environments.

From small patio or courtyard spaces to large garden beds, there’s ample selection for any setting.

Best for Your Garden

Now that you’re familiar with the different classifications and have learned how to identify dahlia flower types, have you decided which will be best for your garden?

From anemone to waterlily forms, you’re sure to find a few new favorites to brighten up your late season landscape – tell us about your selection in the comments section below!

And for more know-how on growing dahlias, be sure to add these articles to your reading list: 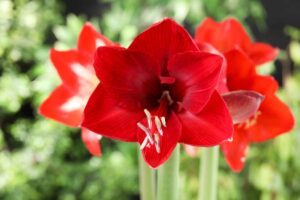 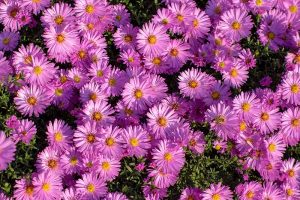 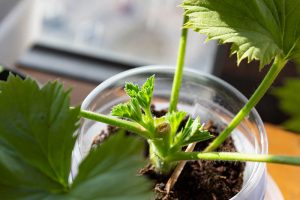 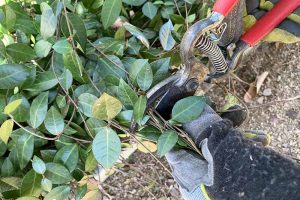 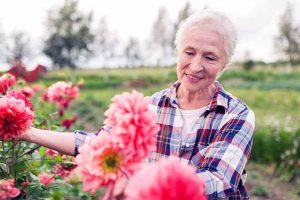