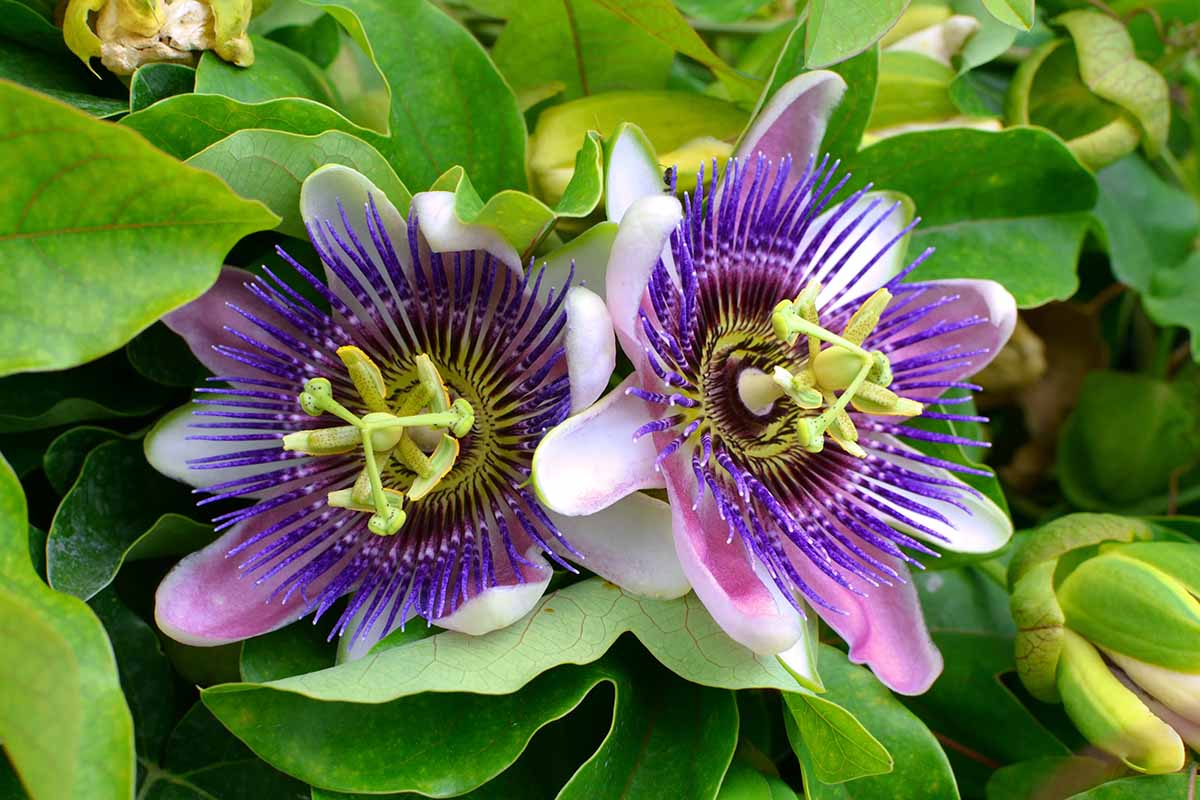 Many people in the US are most familiar with the purple passionflower, with its purple petals and corona, topped with yellow anthers and stamens.

In Europe, growers love the similar-looking bluecrown passionflower, and it’s the most popular variety there.

But few gardeners are closely acquainted with the red banana passionfruit, with its long fuchsia-red petals and insignificant corona.

Or what about Jamaican honeysuckle, featuring relatively petite petals and massive purple and white striped filaments that droop to embrace the stigma and anthers?

Passionflowers come in a surprising range of colors, sizes, and shapes. There are nearly 600 known species in the Passiflora genus and over 700 recorded cultivars, most of which are hybrids. Most are vines, but some even have a tree-like growth habit.

The ripe fruit of most cultivated species is technically edible but most of them have a bitter, unpalatable flavor.

Unripe fruits and foliage contain toxic cyanic glycosides and should not be consumed. Unless otherwise noted, species and cultivars listed below should be grown for their ornamental value, not for eating.

If you’re interested in learning about some of the most common and worthwhile species and hybrids to grow at home, keep reading. Here’s what we’ll cover, coming right up:

17 of the Best Passionflower Varieties

A lot of people think they can’t grow passionflowers in their area because the temperatures are too cold in the winter, but there are a few plants that can handle cold temperatures all the way down to 0°F.

Whether you need something cold-hardy or a vine to wow the neighbors – or both! – this guide can help you find it, so let’s climb right in.

P. caerulea is native to South America, and it’s the national flower of Paraguay.

It has been crossed with other varieties to create many beloved hybrids. The flower petals are cream-colored with blue, white, and burgundy filaments.

Some of the notable hybrids and cultivars to come out of this species include ‘Constance Eliott,’ ‘Pretty Tina,’ ‘Snow Queen,’ ‘Susanne,’ and ‘Diva.’

You can pick up packets of P. caerulea seeds at Eden Brothers.

Hybrid ‘Blue Bouquet’ is exceptionally popular because it features purple, almost blue flowers with white and magenta rings at the center.

It’s a heavy bloomer, and the 30-foot vines will be absolutely smothered in three-inch blossoms during the summer.

One of its parents is P. caerulea, and it retains a similar size and coloring.

It’s not the best option, however, if you’re hoping to eat the fruits. They’re not very flavorful.

P. cincinnata is a Brazil native that has deep purple flowers with just a hint of red. The corollas are longer than the petals and have wavy edges.

Rarely seen in cultivation, this species has been crossed with others to create several outstanding hybrids, including ‘Frizzle King,’ ‘Incense,’ ‘Liliana,’ and ‘Catherine Howard.’

P. citrina was described in 1991 by American botanist John M. MacDougal. He found this passionflower species growing wild in Honduras.

This little guy has petite yellow flowers and is usually grown as a houseplant, as it can flower for up to 10 months of the year.

Hybrid cultivars of this species include ‘Becky Speed,’ ‘Golden Jubilee,’ and ‘Polly Molly.’

It was originally called ‘Silly Cow’ as a term of endearment for his dear friend, but he has since renamed it ‘Damsel’s Delight.’

The five-inch-wide flowers have white petals and wavy purple filaments that are tinged with dark purple at the center.

Whatever you call this cultivar, it’s a beauty. Don’t select this hybrid if you’re aiming to grow fruits, though. It’s sterile and doesn’t set fruit.

It has flat, purple petals with violet and magenta coronas that twist and curl around each other. It’s a robust plant that is covered profusely in four-inch flowers all summer long.

‘Elizabeth’ also has some of the best-tasting fruits, which are large and sweet.

P. gritensis isn’t a common species at nurseries, but hybrids of this Colombian native are some of the prettiest options out there.

The flowers have huge fuchsia petals with a faint white stripe along the midvein. The petals fold back, putting the salmon-colored corona front and center.

Some of the more notable hybrids include ‘Anastasia,’ with salmon and white filaments, and ‘Grand Duchess,’ with extraordinary pink petals.

P. incarnata and P. cincinnata were crossbred to create ‘Incense,’ a stunning purple hybrid. The corona and petals are deep purple, with long, wavy filaments.

This is one of the hardiest passionflowers, and it can survive temperatures down to 0°F. It also has beautiful dark green leaves and tasty, sweet fruits.

This hybrid can do it all. No wonder it nabbed the Royal Horticultural Society’s Award of Merit in 1976!

If the vine is killed by cold weather, it will regenerate from the roots so long as temperatures don’t drop too much below 0°F. To grow a good crop of fruits, plant it with a purple passionflower to cross-pollinate.

Lovely ‘Lady Margaret’ is a hybrid of P. coccinea and P. incarnata.

Just like its scarlet parent, she has long, raspberry-red petals. The corona has a bright white center with long, wavy filaments in purple with stripes of magenta and white. 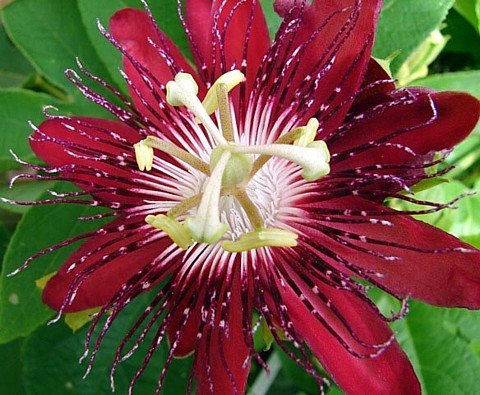 Grab a plant in a four-inch pot from 9GreenBox via Amazon.

Purple granadilla (P. edulis) has a beautiful flower with frilly curled purple and white filaments over snowy white petals, and it would be worth growing this species for the blossoms alone.

But the flower produces a comparatively massive berry, making it one of the best options for growing edible fruit. It’s the only species known simply as “passionfruit.”

If you want to grow your own edible passionfruit, you can find plants in one- or three-gallon containers available from Fast Growing Trees.

Perfumed passionflower (P. vitifolia) is named for its heavily fragrant fruit, but there’s a catch.

When the berry falls off the plant, it’s extremely sour. But left to ripen for several weeks, it becomes sweeter, like a tart strawberry.

The flower itself is vibrant red with long, lanceolate petals, and short red and white filaments that don’t open against the petals but remain upright.

P. incarnata is native to North America and it’s partially responsible for many of the hybrids you’ll find out there.

It has pale purple petals and filaments with a small white ring. The filaments are crimped at the ends, giving it a strange, alien-like appearance.

Many times, you’ll simply see the plant sold under the species name or under the name “maypops.”

You can find live plants available at Burpee.

Also called vanilla passionfruit, P. antioquiensis has some of the largest flowers in the genus, up to six inches across!

They have bright fuchsia-red petals with petite purple corollas. The fruits are long, green, and almost banana-shaped.

The Brazilian native red passionflower, P. racemosa, varies slightly from some of its family in that the petals are the star of the show rather than the filaments.

Don’t confuse this species with P. manicata, which is also called red passionflower. In addition to sharing a common name, they look similar.

Scarlet passionflower (P. coccinea) has long, velvety, vivid red petals and white and blood-red filaments. The flowers can be up to four inches across.

This is one species that doesn’t mind partial sun. You’ll still have a vibrant show of blooms, even without full sun exposure.

The stinking passionflower (P. foetida) only stinks if you disturb the flowers, so don’t worry about turning your yard into a fetid spot that no one wants to hang out in.

The bad news is that this plant has become invasive in tropical regions across the planet. Still, if you can keep it under control (try container planting!), it’s a worthwhile species to have around.

It has beautifully rounded, white petals and white filaments with a ring of maroon at the center.

Winged-stem passionflower (P. alata) is distinct from its cousins in that it has bright red petals and purple and white corona filaments, but the filaments don’t open fully. Instead, they stay somewhat closed around the anthers.

It’s exceptionally fragrant and the fruits are regarded as some of the best tasting of the whole genus.

‘Frederic,’ ‘Nicole,’ ‘Starlight,’ and ‘Superba’ all come out of this species.

A Plethora of Options

When I first saw a red passionflower vine at a nursery, I stood there a bit stumped. Who knew there was something available other than the familiar purple flower? Now, you and I do!

Whether you’re looking for unusual fruits, massive flowers, or a vine that will stick around even when the weather is freezing, one on this list is going to fill the bill. Let us know in the comments below which you end up growing!

If you want to learn more about the beautiful, bold passionflower, check out some of our other guides next, starting with these:

Kristine Lofgren is a writer, photographer, reader, and gardening lover from outside Portland, Oregon. She was raised in the Utah desert, and made her way to the rainforests of the Pacific Northwest with her husband and two dogs in 2018. Her passion is focused these days on growing ornamental edibles, and foraging for food in the urban and suburban landscape.
More Posts
Subscribe
2 Comments
Oldest
Newest Most Voted
Inline Feedbacks
View all comments 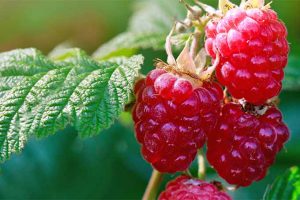