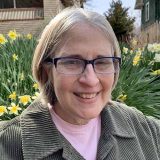 Rose Kennedy has often grown edibles in quirky and inhospitable spaces, including the okra she planted around a newly installed post mailbox as her apartment “garden” during her first days in Knoxville, Tennessee. Nowadays, she has plenty of room to branch out across three acres of suburban property, but she still loves finding and sharing offbeat home garden solutions.

The seventh child of a poet and a civil engineer, Rose revels in both the spirit and the science of plants. She shakes her head in disbelief and admiration when her hybrid tomato seeds sprout unevenly in a carefully controlled indoor planting dome, while ‘Yellow Currant’ tomatoes reseed themselves thick as carpet on every uncovered soil surface in the backyard. (Yes, the ground freezes in winter in East Tennessee).

Rose especially likes the way a shared love of growing can bridge the gaps between groups, and unite individuals whose opinions clash on every issue – except when and how to plant onions. She shares lore, history, and planting expertise with her Appalachian neighbors every chance she gets, old-timers and newcomers alike.

Her garden writing background is a similar mashup of practical and poetical. Rose has contributed to Yankee Publishing books like “Projects for the Birder’s Garden.” She has written how-to gardening articles for parenting publications and the Atlanta Journal-Constitution online. She loves nothing so much as presenting a step-by-step tutorial on, say, creating a vining “teepee” that birds will love.

But she also likes to examine the emotions and conflict inspired by growing, and report on the people and personalities involved. Rose was the former “Dirt to Fork” columnist for an alt-weekly newspaper, The Knoxville Mercury, that has since ceased publication. She wrote about the joys and hardships of growing and pickling eggplant, and intrigued local readers with the saga of taking a third-place ribbon for her very first country fair entry, broccoli cornbread muffins.

She also profiled world-famous seed saver John Coykendall in an award-winning story for that publication, and wrote cover stories on both heirloom tomatoes and Knoxville’s upstart organic farmers for the Mercury’s predecessor, Metro Pulse.

Rose enjoys an embarrassment of riches, between her many raised garden beds, her spouse, Wade, who is handy with hardscaping projects and tilling, and the long growing season in East Tennessee. Thanks to these, she will not whine about the inevitable invasion of squash borers that reduce her cucurbit harvest to a mere three or four weeks every summer.

Rose admits she is part of the problem, since she is a reluctant and inconsistent slayer of pest insects. Instead of dwelling on that shortfall, she prefers to remember the 2018 growing season, when a single volunteer ‘Long Island Cheese’ pumpkin took over six raised beds and produced 26 fruit, each weighing at least 10 pounds.

If you’re looking for Rose on a Zoom call, she’s the one with dirt under her fingernails, a smile on her face, and a dreamy look. She’s probably thinking about sunflowers.