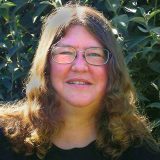 Helga George created her first garden as a toddler by moving patches of different kinds of mosses to a spot under a shrub.

Since then, her life has been focused on all things plants – growing them, studying them as a plant scientist, writing about them, and even serving on the board of a local botanic garden.

Helga used to believe that there was no such thing as having too many plants – until she had to move to a new house! Fortunately, most of her collection was in containers to prevent her dog from digging them up. Moving 150+ containers of plants is not trivial!

A precursor to this was an earlier move from Ithaca, New York, to Tucson, Arizona when her doctoral lab moved from Cornell University to the University of Arizona in the heat of August. She brought her collection of houseplants with her in four milk crates, and would transfer the plants to her motel room every evening, then back to the car every morning. Fortunately, her husband is very understanding and tolerates her obsession with plants.

Helga spent her childhood devouring books on rare and greenhouse plants, and was delighted to end up in the Santa Barbara area where many of them grow. Her desk always faces her garden, so she often sees butterflies and hummingbirds while she works.

Science was a hobby of Helga’s from an early age. She used to raise and collect insects, taking notes on their life cycle, and kept herbarium specimens of the plants in her neighborhood.

As a child, she also learned about the chemicals that plants make to defend themselves. Helga was so fascinated that she devoted her doctoral studies at Cornell University to an examination of the ways fungi evolved to counteract pea plant defense mechanisms, so they could cause disease. Both her MS and PhD degrees are in plant pathology – the study of plant diseases.

While she chose to focus on plant pathology, Helga remains interested in insects and also studied entomology as an undergrad at Cornell. Her house is a safe spider zone.

Helga obtained a USDA grant as a postdoctoral fellow at the University of California in Santa Barbara, but grew frustrated with funding issues in the sciences and tired of moving every few years. She settled down with her husband Wayne, and transitioned to professional writing.

Helga is an information junkie, so aside from gardening, her main hobby is reading about politics, science, and agriculture. She watches crime shows as a distraction before bed, or obsesses about rare plants in catalogs.