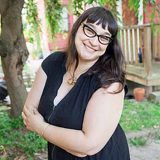 Alex got her start in the world of growing food after moving from her hometown of Raleigh, North Carolina to Philadelphia. In 2010, she started working as the Fresh Food Manager at Greensgrow Farms, the city’s premiere urban farm. There she directed operations for the then-600 member CSA, the twice-weekly farmstand, and restaurant sales. While her focus there was food, Alex often worked alongside or in support of Greensgrow’s full-service nursery staff. Along with a little garden education by osmosis, she picked up some good growing habits from the produce growers she sourced from.

Around the same time, after sitting on a waitlist for a year, Alex was finally accepted into a neighborhood community garden. Even in a green neighborhood like West Philadelphia, the demand for green and growing space far outpaces supply. Ever since then, she’s been steadily growing what she calls her “urban nano-farm “ – now at around 180 square feet, comprised of a few large containers and 5 raised beds in 2 community gardens. In addition to growing perennials like herbs and rhubarb, and staples such as tomatoes and carrots, she experiments with unique annuals like Malabar spinach, yacón (a.k.a. Peruvian ground apple), purple tomatillos, dent corn, and sorghum.

Alex holds bachelor’s degrees in tuba performance (yes, really) and general studies from the University of Michigan, and completed the inaugural session of the University of Vermont’s Food Hub Management program in 2015. She’s also a proud alum of Eat Retreat, the three-day creative retreat for food professionals. She believes in maintaining urban community green spaces and protecting them from development, garden education for youth, and that even a windowsill pot of herbs can make a difference in your home-cooked meals and your happiness.